Ganymede is the seventh moon of Jupiter and the third of the Galilean moons. It is the largest moon in the solar system and is larger than the planet Mercury and dwarf planet Pluto. Ganymede is only slightly smaller than Mars and if it were orbiting the Sun rather than Jupiter, it would be classified as a planet itself.

Ganymede was discovered by Galileo Galilei on 7 January 1610 along with the three other Jovian moons Europa, Io and Callisto. Together they are referred to as the Galilean moons. The discovery of these four Galilean satellites are what eventually led to the understand that the planets in the solar system were orbiting the Sun and that Earth was not the centre of the solar system.

Size of Ganymede compared to Jupiter

If Ganymede were orbiting the Sun it would be a planet.

Ganymede is larger than both Mercury and Pluto, and is 2/3 the size of Mars with a diameter of 5,268 km (3,273 miles) – 8% larger than Mercury. It has the highest mass of all planetary satellites and has more than twice the mass of the Earth’s Moon.

The moon is named after a Trojan prince in Greek mythology.

Originally called Jupiter III by Galileo, Ganymede was named after a suggestion from German mathematician and astronomer Johannes Kepler. In the Greek story Zeus, a counterpart of Jupiter in Roman mythology, carried the prince Ganymede to Olympus, where he became a cupbearer for the Olympian gods.

The moon orbits at 39,165 km (24,321 miles) an hour and takes 7.15455296 Earth days to complete its orbit around Jupiter. Like most moons in the solar system, Ganymede is tidally locked to Jupiter and one side is always facing the planet. Interestingly, for every orbit of Ganymede, Europa orbits Jupiter twice and Io orbits four times.

Ganymede is the only moon in the solar system known to have its own magnetic field.

It is believed that the magnetosphere of Ganymede is likely to have been created through convection within the liquid iron core of the moon. The field is very small though and is barely noticeable because it is buried within Jupiter’s much larger magnetic field.

The moon is composed of equal amounts silicate rock and water ice and has several layers.

Ganymede is made of rocky material and water ice. It has a metallic iron and iron sulfide core which is surrounded by a rocky mantle and a very thick icy crust.

There may be an ocean layer of liquid water beneath the surface of Ganymede.

An study published in 2014 suggests that there might be a stack of several saltwater ocean layers separated by different phases of ice as far as 124 miles below the surface of Ganymede. The lowest liquid layer may be right next to the rocky mantle below and could be sign for sustainable life on Ganymede.

40% of Ganymede’s surface is covered with highly cratered dark regions.

These dark regions are believed to be from heavy impact by asteroids or comets and date back to around 4 billion years ago. The lighter regions of the moon’s surface are not quite so old and cover the rest of Ganymede. The cause of the light terrain’s disrupted geology is though to be the result of tectonic activity caused by tidal heating – a build up of friction, orbital and rotational energy that are dissipated as heat in the crust of the moons and planets involved.

Ganymede has a thin atmosphere than contains oxygen.

The moon has a very thin atmosphere and it does contain small amounts of oxygen but there is not enough to support any form of life.

Six spacecraft have visited Ganymede since 1973.

Pioneer 10 and 11 were launched in March 1972 and April 1973 respectively and made successful flybys of Ganymede in December 1973 and December 1974. They sent back limited data with blurry images of the moon. Voyager 1 and 2 returned much more high quality and detailed images in 1979 which showed the grooved terrain and also discovered that Ganymede was larger than first thought – replacing Saturn’s moon Titan as the largest satellite in the solar system.

The Galileo spacecraft in 1995 passed as low as 162 miles (261 km) over the surfaces of the Galilean moons, sending back a lot of new data such as the discovery of the magnetic field, the ocean beneath Ganymede’s surface, and the highest resolution close up images of the moon.

Finally, New Horizons in 2007 sent back images and made topography and composition maps of Ganymede before continuing on towards Pluto and the Kuiper Belt. 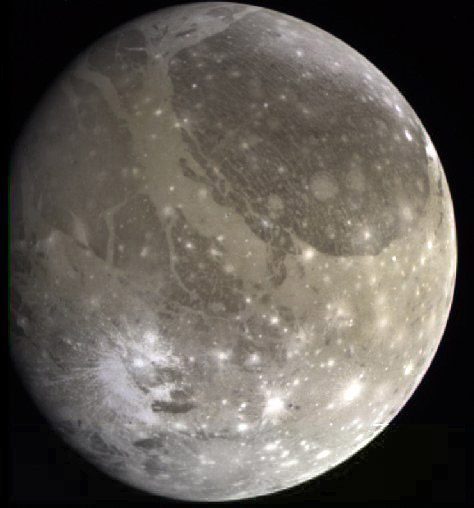