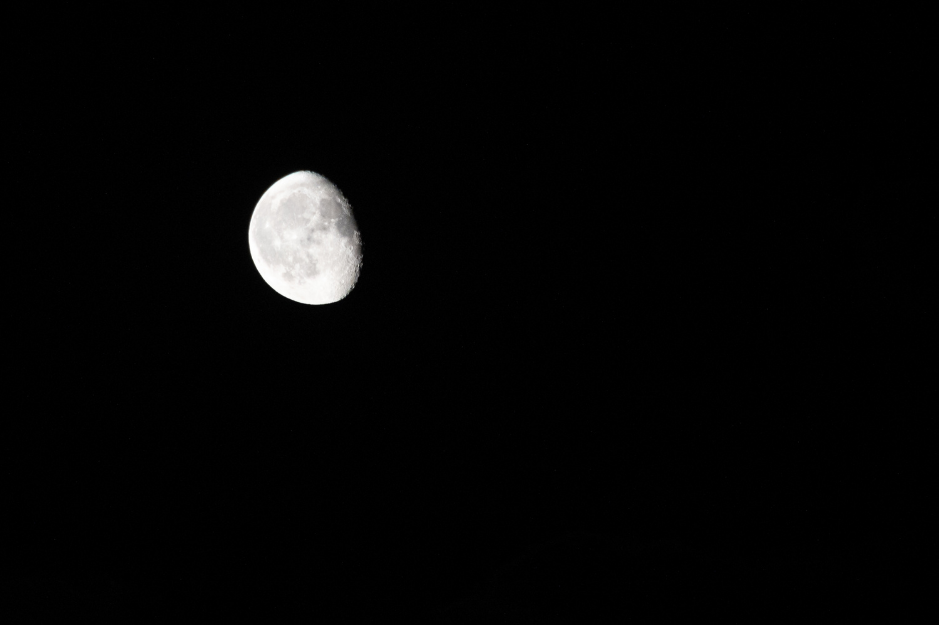 Before we get into the different phases such as waning gibbous moon, or waxing crescent moon, let’s first discuss a little about the moon in general.

The Moon is the brightest object in our night sky. However, it does not produce its own light. The Moon’s surface reflects light from the Sun, just like everything else in the solar system.

As we know, the Earth goes around the Sun, and our Moon turns around our planet. It is also important to note that our only natural satellite is tidally locked to Earth. What it means is that it takes the same time for it to rotate on its axis and orbit Earth. Because of that, only one side of the Moon is facing Earth.

The side of the Moon that we see is called the “near side.” The other one, facing away, is the “far side.” Sometimes, we can see the near side in its entirety, and sometimes, only a small fraction of it is visible.

The apparent change in the Moon’s shape is called the lunar phases or the Moon phases. Of course, the Moon does not really become bigger or smaller. Every month, its trip around Earth brings it to different positions relative to the Sun.

The important thing to remember is that the illuminated part of the Moon is always the side that is facing the Sun. Basically, the changes in the Moon’s appearance are all a matter of perspective. It is a result of its celestial dance with the Earth and Sun.

What Is a Waning Gibbous Moon? 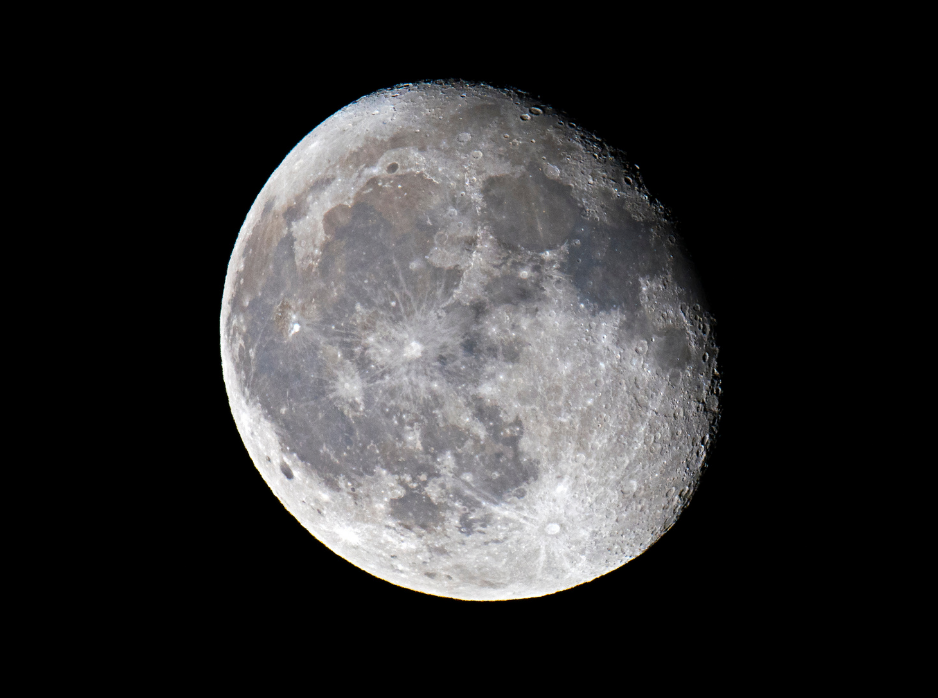 The Waning Gibbous Moon phase is an intermediate phase. It comes after the Full Moon. From the fully sunlit Moon, the illuminated part seems to be shrinking as it enters the waning phase. It will continue to shrink until it reaches the Last Quarter—that is when we see a “half-moon.” It is also called the Third Quarter Moon.

At times, it can be a challenge to identify if what we see is still a Full Moon or a Gibbous Waning Moon. The Sun, Moon, and Earth only align for a very short time so a Full Moon does not last long. Still, it can “appear” full for about three days when we can see about 98% of it. However, since it is not 100%, it is technically a Waning Gibbous Moon already.

Let’s see how it fits into the context of the lunar cycle.

Waxing And Waning Gibbous Phase in the Moon Cycle 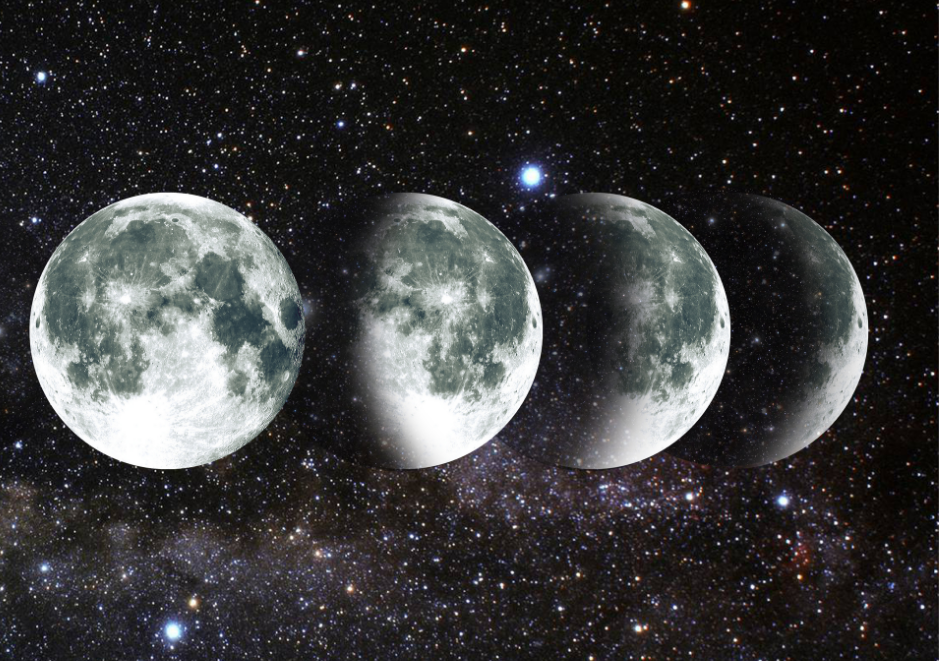 The Moon continues on its orbit around Earth in a counterclockwise direction. From 100% darkness of the New Moon, we begin to see a small part of it in a Waxing Crescent Moon.

“Waxing” means increasing, and it will continue to do so until we see half of the disk in the First Quarter Moon. It means that Moon has traveled a quarter of its orbit already. When it grows more than 50%, it is in the Waxing Gibbous phase.

The waxing phases lead to the most spectacular phase—the Full Moon. The Moon, Earth, and Sun aligned again at this phase. This time, however, the Earth is at the center. Since the Earth and Sun are on the same side of the Moon, the illuminated part is fully visible to us.

The three bodies only align for a short time. After the 100% illumination of the Full Moon, it enters the waning stage. “Waning” means decreasing. The Waning Gibbous is a transitional phase that lasts about six days. During this time, the visible portion of the Moon decreases from 99.9% to 50.1%.

Following the Waning Gibbous Moon phase is the Last Quarter. By this time, the Moon is 50% visible. It shrinks even further during the Waning Crescent phase until it becomes totally dark—and a New Moon starts the cycle again.

When Does A Waning Gibbous Moon Occur?

A Waning Gibbous Moon occurs after the Full Moon and before the Last Quarter. Overall, it is the 6th stage of the eight moon phases. By this time, the Moon has traveled more than half along its orbital path around Earth.

There are four primary phases of the Moon: New Moon, First Quarter, Full Moon, and Last Quarter Moon. Between them are the intermediate phases Waxing Crescent, Waxing Gibbous, Waning Gibbous, and Waning Crescent.

How Long Does It Last? 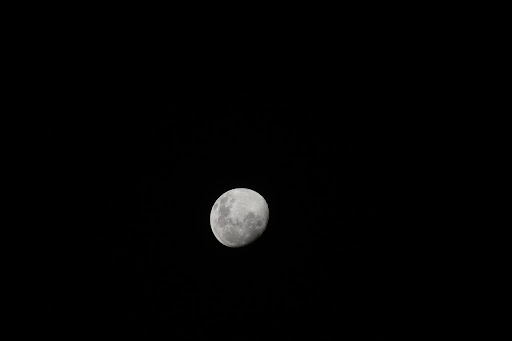 The intermediate phases of the Moon last longer than the primary ones. They serve as transition periods between the major phases.

The Moon takes 29.5 days to complete a cycle, from one New Moon to the next New Moon phase. From that total number, we can get a clue of how long each of the phases lasts.

The four primary phases present exact positions. During the New Moon and Full Moon, the Sun, Earth, and Moon are in a straight line. In the First Quarter and the Third Quarter, they form a right angle.

Since everything is moving, they are only in these exact positions for a very short time. That is why these four phases generally last 3.4% of the entire cycle or about one day each.

The intermediate phases, on the other hand, last longer. The Waning Gibbous phase, together with Waxing Crescent, Waxing Gibbous, and Waning Crescent, lasts for about 6 days. Each of these phases accounts for about 21.6% of the Moon cycle.

With that said, we have more time to witness the Waning Gibbous phase, as we see the lunar disk shrink from 99.9% to 50.1%.

Which Side of the Moon Can We See? 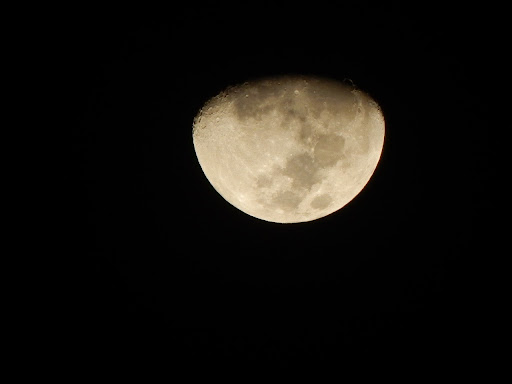 The visible fraction of the Moon is consistent no matter where you are on Earth. However, our perspective can affect which side of the Moon looks illuminated.

Observers from the northern hemisphere will see the right side lit up during the waxing phases. It becomes the left side in the waning stages. From the southern hemisphere, it will be the opposite—the left portion when the Moon is waxing and the right part when it is waning. Around the equator, it is either the top or bottom part.

So for the Waning Gibbous Moon, you will see it lit on the left side if you live north of the equator. If you are observing it from the southern hemisphere, the Gibbous Moon is illuminated on the right side.

Rising and Setting of the Moon

Like the Sun, the astronomical objects that we see in our sky rise and set from the horizon. One way to identify that the Moon is waning is if we cannot see it during sunset. That is because, at the Waning Gibbous phase, it rises past sunset.

Moonrise during this stage is around 9 pm so it is visible most of the night. It appears highest in the sky at 3 am, and it will set at 9 am.

Seeing the Moon in the Daytime 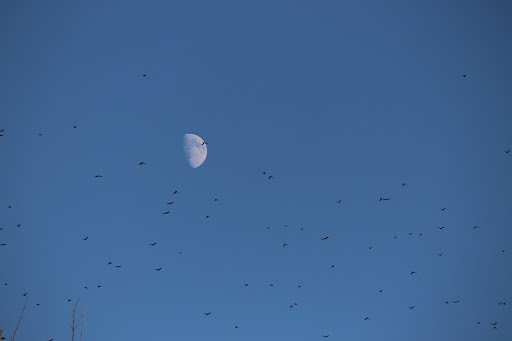 The Moon is not entirely a nocturnal object. In fact, it is up during the day for half of the month. However, it is sometimes difficult to spot because of the intense brightness of the Sun. During the New Moon, for example, it rises and sets together with the Sun so it is impossible to see it with the Sun’s glare.

The good news is, we can see the Waning Gibbous Moon in the daytime. Since it rises after sunset and sets after sunrise, we get to see it in the early morning. Generally, the Sun rises at 6 am so we have a window time of about three hours before it totally sets at 9 am.

Like every object in our sky, we can see the Moon rise in the east and set in the west.

The best time to see the daytime Moon is during the First Quarter and the Last Quarter. This time, the Sun and Moon are not so close together in the sky. Still, they appear at the same time but the Sun does not make the pale Moon totally invisible. 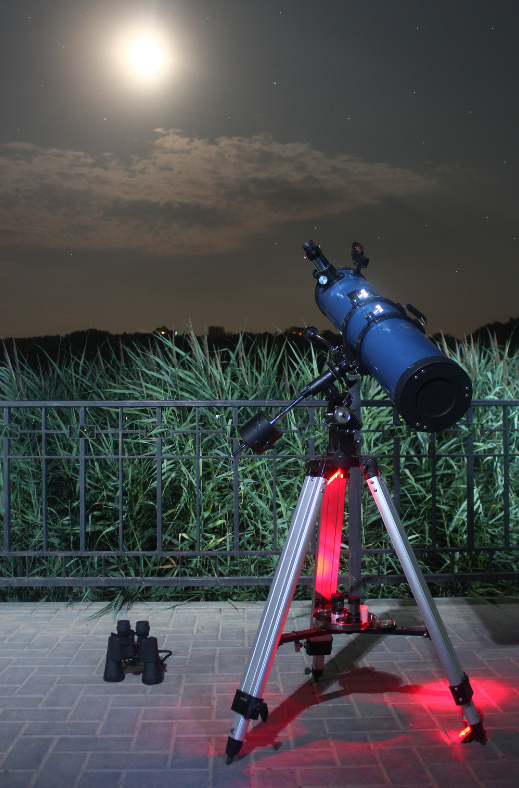 The Moon phases will tell us whether it is a good night to camp outside with our telescopes. Whether we want a dark or luminous sky depends on our purpose. But as always, it is always best to stay away from light pollution when marveling at the sky.

If you want to observe the Moon, then the Full Moon will give you the best glimpse of this natural satellite. However, if you want to see stars, nebulae, star clusters, then the dark sky during a New Moon is the best time. You can also have fun tracing the different constellations.

The Waning Gibbous phase provides a great opportunity to observe our only moon. Right after the Full Moon, we can still see most of the lunar disk so the night is still bright. This means fainter objects will not be easily visible in the night sky.

Effect on the Sea

The Moon and Sun influence the tides in our seas and oceans. The gravitational pull from these two bodies causes the tidal bulge. Because of that, the position of these bodies relative to Earth affects our tides.

The greatest difference in tides will be during the New Moon and Full Moon when the three bodies are aligned (syzygy).

In a straight-line position, the pull of the Moon and Sun are combined. It results in “spring tides” where the high tides are very high and the low tides are very low. 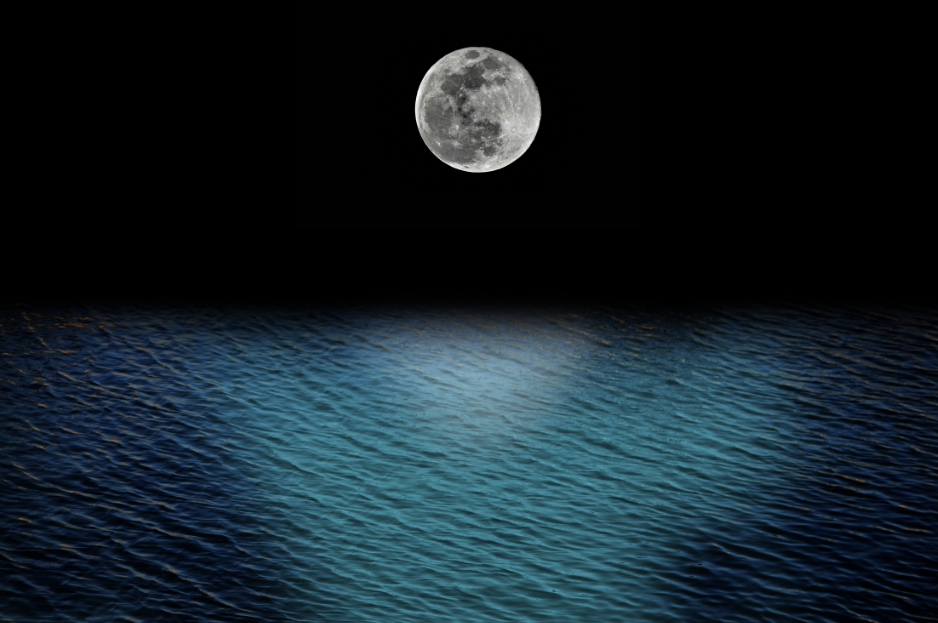 Since the Waning Gibbous Moon comes after the Full Moon, the tidal bulge is decreasing this time. They are not as extreme as spring tide yet also not as minimal as the “neap tides.”

Neap tides occur during the First Quarter and Last Quarter. At this phase, the three bodies are at a right angle and the gravitational pull of the Moon and Sun are canceled out. This time, the difference between high tides and low tides is very minimal.

To review, there are three main types of tides:

The Waning Gibbous Moon comes after the Full Moon. To know when you will see it in this phase, refer to the Moon calendar below for 2021 and 2022.

1. What happens during the Waning Gibbous Moon phase?

When the Moon is in the Waning Gibbous Moon phase, more than half of it is visible. It occurs just right after Full Moon. By this time, the Moon has traveled more than halfway through its orbit around Earth.

3. How to know if the Moon is waxing or waning?

The Moon is waxing before the Full Moon and wanes after it. Also, another indication is that we can see a waxing Moon during sunset. We cannot see it at sunset during the waning phase because it rises after the Sun dips below the horizon.

Moon, Earth, and Sun from above the Solar system: https://starchild.gsfc.nasa.gov/Images/StarChild/icons/moon_above.gif

The Moon as seen from Earth: https://starchild.gsfc.nasa.gov/Images/StarChild/icons/moon_from_earth.gif