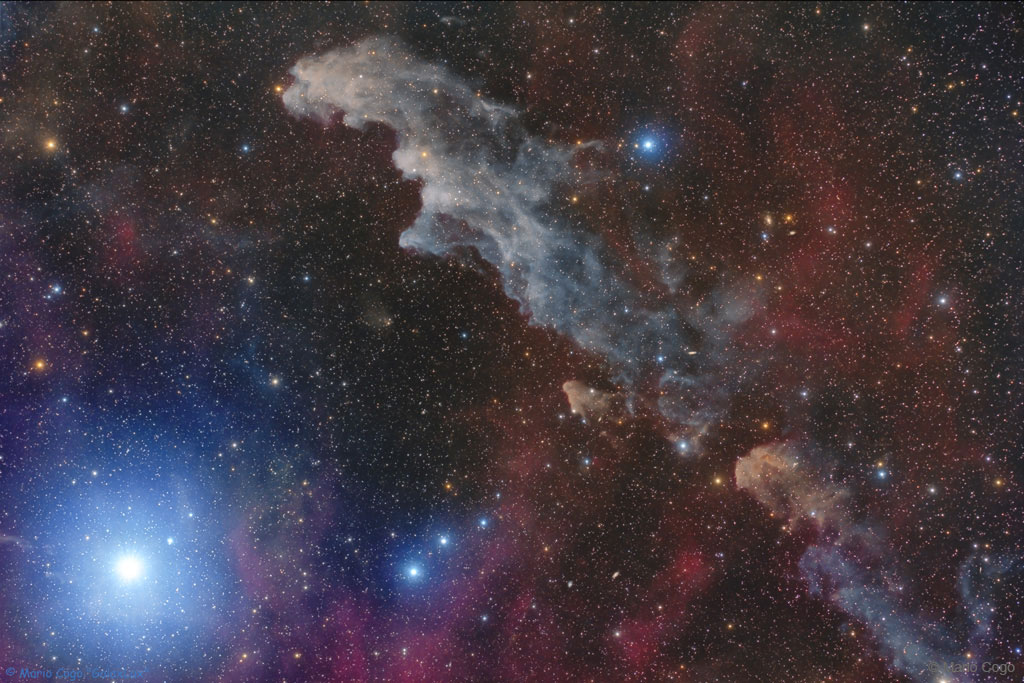 The Witch Head Nebula is a very faint reflection nebula in the constellation of Eridanus, located around 1,000 light years away from Earth. It has an apparent magnitude of 13 and is 3 x 1 degrees in size. It is also known by its official name, IC 2118, and is designated NGC 1909 in the New General Catalogue. The nebula is not visible to the naked eye.

The nebula was given its name because it looks like a profile of a wicked witch. It is an ancient supernova remnant or a gas cloud illuminated by the nearby blue supergiant star Rigel, the brightest star in constellation Orion and the seventh brightest star in the sky.

The Witch Head Nebula is located 2.6 degrees to the west of Rigel, which has an absolute magnitude of -7.92 and a luminosity about 120,000 times that of the Sun.

The blue colour of the Witch Head Nebula is in part a result of the dust particles within the nebula reflecting blue light more efficiently than red. A similar process is responsible for making our sky appear blue.

There have been radio observations of the nebula that have revealed that parts of it show significant carbon monoxide emission. This indicates that the nebula contains molecular clouds where star forming activity occurs.

New observations in infrared wavelengths led astronomers to discover a half dozen new stars within the nebula. The nebula emits in infrared because its newly formed stars heat the surrounding gas and dust.

The Witch Head nebula used in the television series Andromeda as the site of a major space battle that sent civilization into an era of chaos.

The Witch Head Nebula was discovered through astrophotography by the German astronomer Max Wolf in 1909.