The Pleiades star cluster is an open star cluster located in the zodiacal constellation of Taurus, the celestial bull. It is also known as the Seven Sisters and designated as Messier 45. It is among the nearest star clusters to Earth, and it is also visible to the naked eye.

The Pleiades cluster is very bright, with an apparent magnitude of 1.6, but it cannot be seen during May and June since the Sun blocks our view of the cluster in that period. The cluster is a prominent sight in winter in the Northern Hemisphere and are easily visible out to mid-Southern latitudes.

The brightest stars in the Pleiades cluster are named after the Seven Sisters of Greek mythology and their parents — Sterope, Merope, Electra, Maia, Taygeta, Celaeno, Alcyone, Atlas and Pleione. The name “Pleiades” comes from Ancient Greek, and it most likely comes from “plein”, which translates to “sail”.

The myth associated with the Pleiades depicts the sisters as they caught the eye of Orion, a giant huntsman. Atlas, being condemned for his battles against the gods, was condemned to carry the heavens on his shoulders while Orion, the giant, pursued his daughters.

The Greek god Zeus stepped in and transformed the sisters into doves, and then into stars to console their father. However, Orion is still perusing the sisters, as represented by the constellation Orion as it pursues the Pleiades. 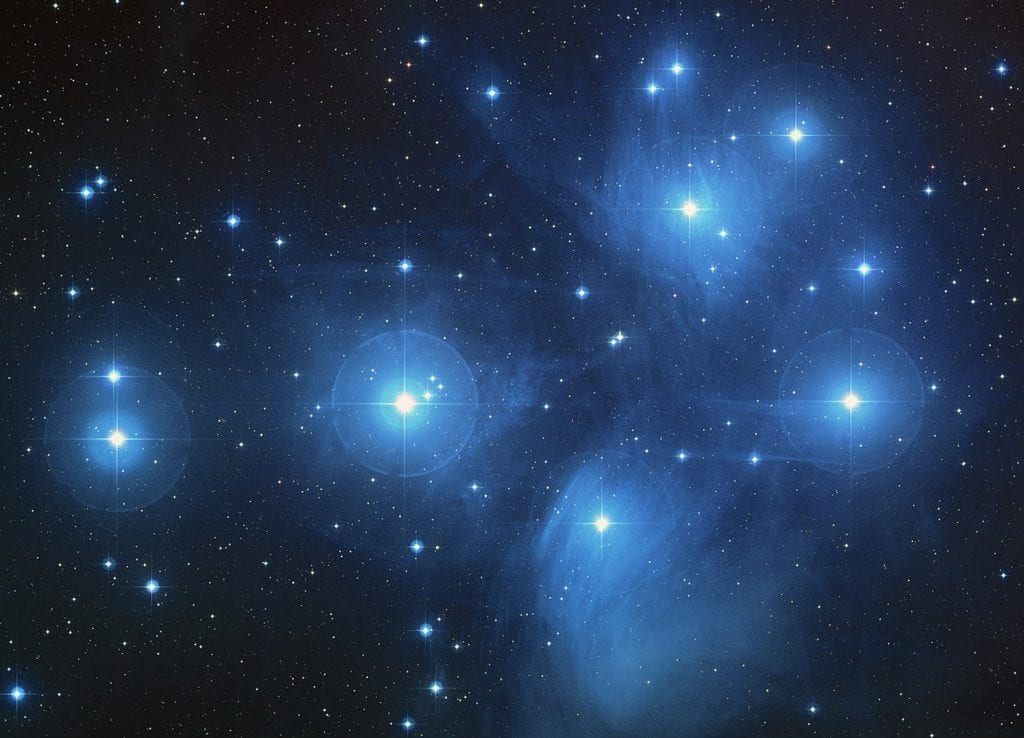 The Pleiades star cluster is located around 444 light years away from the Sun in the constellation of Taurus. Taurus represents the celestial bull and is also home to another great open cluster named Hyades.

Taurus is among the largest constellations in the night sky. The Pleiades star cluster is among the closest star clusters to Earth, and one of the brightest in our vicinity. It is best observed and studied in January.

The Pleiades has a mass around 800 times that of the Sun. It is very large and bright and can be seen with the naked eye from Earth.

The cluster stretches for bout 17.5 light years, with its dimensions being around 110 arcminutes. The core radius is about 8 light years and the tidal radius is around 43 light years.

The Pleiades contains more than 1,000 confirmed stars, with the exclusion of unresolved binary stars. Many of these stars, especially the brightest, are hot blue stars of spectral type B. These stars have an estimated age of around 100 million years.

Because these stars are so bright, around fourteen can be seen from Earth. It is often thought that the blue stars dominate the cluster because of how bright they are, but there are actually more red stars in the Pleiades. However, these stars are much fainter.

There are many brown dwarfs also in the Pleiades open cluster. These have less than 8% of the Sun’s mass, and, although they may constitute around 25% of the total population of the cluster, they contribute only 2% of its total mass. Therefore, they are not heavy enough for nuclear fusion reactions to start in their cores and become proper stars.

The nine brightest stars of the Pleiades are named for the Seven Sisters of Greek mythology: Sterope, Merope, Electra, Maia, Taygeta, Celaeno, and Alcyone, along with their parents Atlas and Pleione.

It is often thought that one of the Pleiades is “missing”, because when looking at the sky, many people only see six, and not seven bright stars.

However, this myth of the missing Pleiad is neither confirmed nor denied. Some people can see many more Pleiades stars. Claims go as high as 20 stars. If you can see more than six Pleiades stars, it means you have really good eyesight!

The Pleiades star cluster formed between 75 and 150 million years ago. It is thought they were formed from a compact configuration that resembled the Orion Nebula. All the stars in the cluster formed through a gigantic molecular cloud of dust and gas, in which gravity pulled the gas and dust together and formed the cluster.

Galileo Galilei was the first astronomer to view the Pleiades through a telescope. He thereby discovered that the cluster contains many stars too dim to be seen with the naked eye. He published his observations, including a sketch of the Pleiades showing 36 stars, in his work Sidereus Nuncius in March 1610.

However, one of the earliest known depictions of the Pleiades is probably a Northern German Bronze Age artefact known as the Nebra sky disk, which is dated to about 1600 BC.

In 1771, Charles Messier measured the position of the cluster and included it as M45 in his catalogue of comet-like objects.

The Pleiades will continue to exist for a long time, but it has been predicted that in around 250 million years, it will start to disperse due to gravitational interactions with its galactic neighbourhood.