Saturn has a lot going on. Aside from its intricate set of rings, it also holds the most number of moons known in the solar system. One of these, the Prometheus moon will be the focus of this post.

Eighty-two moons are orbiting Saturn, each following the route of their unique orbits. The biggest one is as large as the planet Mercury while the smaller ones can be just the size of a sports arena. Two of its largest moons, Titan and Enceladus, were some of the favorites of the Cassini mission as they hold possibilities to host life. The moon Dione also shows similar characteristics as Enceladus, indicating the presence of a saltwater ocean.

Saturn’s gravity holds its ring in place but it has some little helpers called the shepherd moons. These are the inner small moons, orbiting within or close to the planet’s rings. These natural satellites, although mostly irregular in shape, sculpt the rings of Saturn. They help maintain the well-defined edges of the rings by “shepherding” the loose ring particles back into their place.

Their unique appearance is mostly caused by the accretion of ring particles as they do their daily rounds within the rings. Some of them are elongated while others have equatorial ridges.

Two of the ring shepherds are embedded within the rings and keep the gaps open as they orbit around the planet. These are the moons Pan and Daphnis in the A ring. Their gravitational influence keeps the lanes of the Encke Gap and the Keeler gap open (respectively).

Also keeping things in order just outside the A ring is the UFO-shaped Atlas. Next to it in the F ring are Prometheus and Pandora, shepherding it from both sides. The co-orbitals Janus and Epimetheus are additional contributors to the workforce of these tiny moons. 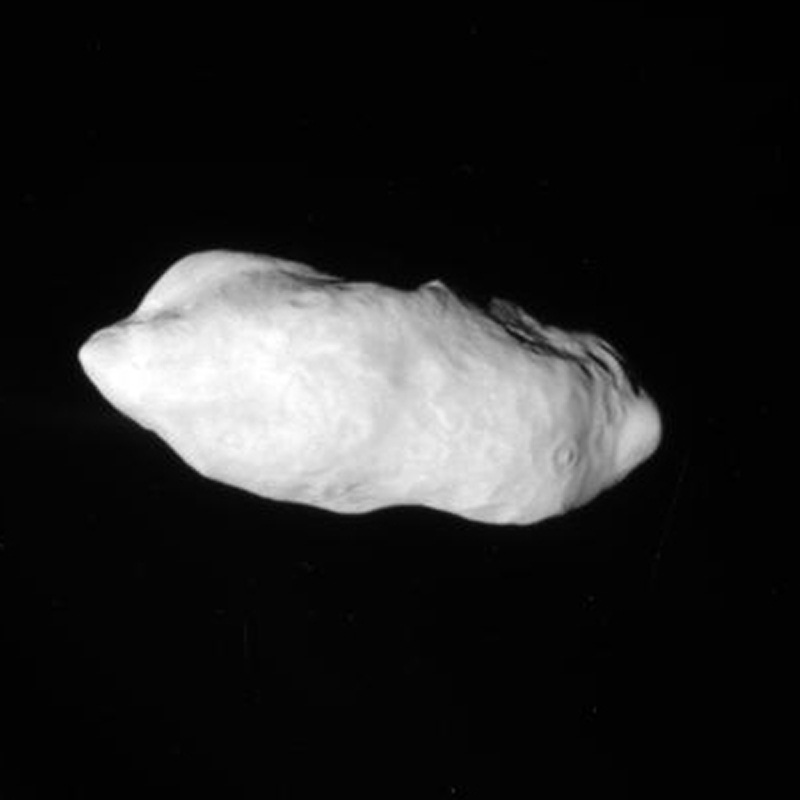 Prometheus is a small moon of Saturn. It was discovered by the Voyager 1 team in 1980. Another designation for this moon is Saturn XVI. It orbits on the inner edge of Saturn’s F ring and acts as a shepherd satellite, herding the ring particles that go astray into the ring. Its gravitational influence creates knots in the F ring as it orbits around Saturn.

Prometheus is a potato-looking natural satellite. It lies close to the F ring together with the moon Pandora on the other edge. Both the moons’ gravitational pull is shepherding the ring materials.

From outside the ring, Pandora pushes the particles closer to Saturn while Prometheus, being inside the ring, pushes them away from the planet. The result is a narrow and kinked F ring. Recent studies, however, reveal that it is not the case and that Pandora does not contribute to shepherding the F ring.

While it is believed that Prometheus helps its parent planet contain the particles of the ring, it also seems to “steal” some of its materials. And as it does so, streamers are created in the F ring. Truly, a feature befitting a moon named after the Titan who stole fire from the gods in Greek mythology.

Orbiting nearly 140,000 km away from Saturn, it takes about 15 hours for Prometheus to complete one trip around the planet. Its chaotic orbit is a result of mean-motion resonances with Pandora, considering that they orbit very close to each other. Meanwhile, Prometheus itself perturbs the inner moon Atlas.

The F ring, discovered by Pioneer 11 in 1979, is a thin structure just outside the bigger and more prominent A ring. It is the narrowest of the major rings of the Saturnian system. 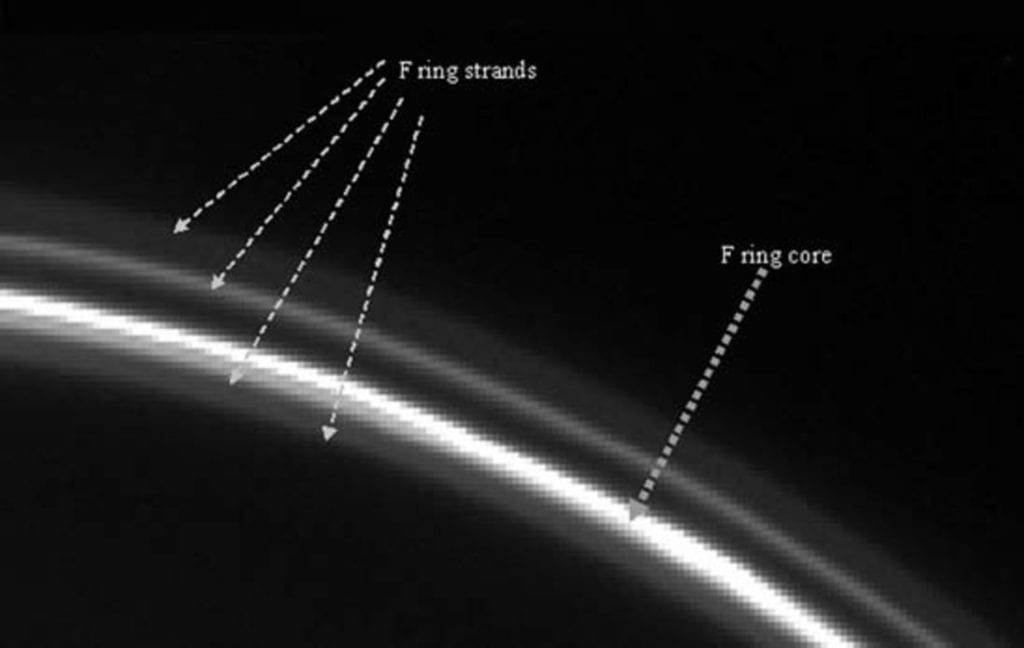 The icy and dust particles of this ring are shepherded from both sides by Prometheus and Pandora. However, it was recently found out that Pandora does not play a role in confining the ring system. Images captured by the Cassini probe in 2004 showed something more about the F ring structure.

A closer look into the F ring shows that it is actually made up of five fine strands, with the central clump being the most notable one. It has also been observed that the strands form a spiral that is slowly winding itself tighter, making a more uniform ring.

Unusual streamers are observed in the ring caused by Prometheus’s constant tugging of material. The Cassini imaging team believes that the recently detected moon S/2004 S6 may also have something to do with the process. 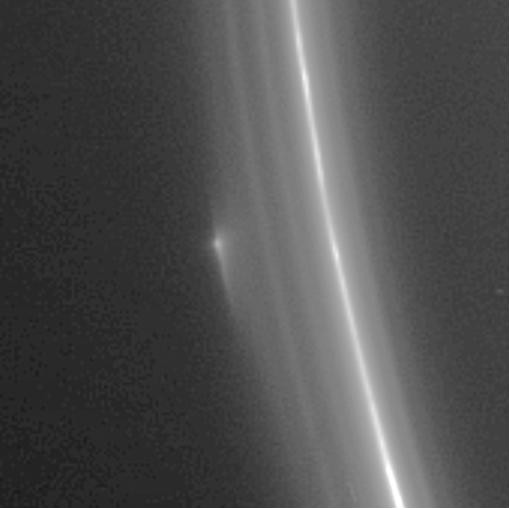 S/2004 S6 is an object seen in the Cassini-Huygens images of October 28, 2004. Its nature is not yet confirmed as it can be a moonlet with a solid core or just a dust clump. Its orbit seems to cross the F ring because it had been observed inside and outside it. It is believed to plow material as it orbits through the ring, thus contributing to the spiral structure.

The F ring and the formation of its strands are still a mystery. Another phenomenon that adds to the puzzle is the “why” behind the streamers and dark lanes that Prometheus appears to create in the ring. 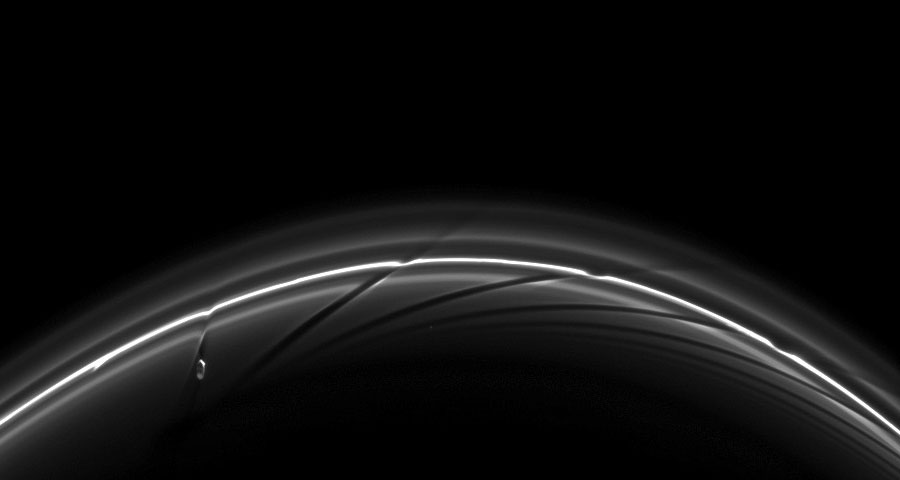 Prometheus is involved in a sort of “orbital dance” with the F ring. The small moon follows an elliptical path and orbits around Saturn nearly every 15 hours. When it gets to its closest point to the ring, its gravity pulls ring materials and leaves behind a dark streak where the particles used to be.

Prometheus will pull particles each pass because it orbits faster than them. Streamers from previous encounters can still be seen as it makes a new one, as shown in the image above from NASA.

Prometheus looks like a potato. It is irregularly shaped and has an exceptionally elongated body. There are ridges and valleys on the surface of this moon. Some 20-km impact craters are also observed, though it is not as cratered as its neighbor Pandora and the orbit-sharing Janus and Epimetheus.

By looking at available data, it is likely that the oblong satellite has an icy body that is highly porous just like the moon Hyperion.

Prometheus was discovered by Stewart A. Collins and the Voyager 1 team in 1980. The mission’s twin probe, Voyager 2, was also able to take photos of the moon in 1981. Before it was awarded an official name, its provisional name was S/1980 S 27. The moon, 86 km across, was seen close-up during a flyby of the Cassini spacecraft on December 6, 2015.

The probe was around 37,000 kilometers away from the moon during the said flyby. Great resolution images were captured, with a scale of 220 meters per pixel. The pockmarked surface of the moon was shown in great detail, with the view taken from its anti-Saturn side.

Still, much about the relationship between Prometheus and the F ring is yet to be uncovered.

Saturn’s moons are named primarily on the stories and mythology that surround the god Saturn which it is named after. The name’s Greek equivalent is Cronus. His son in Roman myth is also the basis for the name of another giant planet, Jupiter. The name’s Greek counterpart is Zeus.

It was John Herschel, the son of astronomer and composer William Herschel, who suggested in 1847 that Saturn’s moons be named after the Titans.

Prometheus [pro-MEE-thee-us] is a Titan in Greek mythology. He is the son of Iapetus and Asia (or Clymene). His siblings are Epimetheus, Atlas, Menoetius, and Anchiale.

The story of the creation of humankind in mythology was attributed to Prometheus. He created people out of clay. And because he loves them so much, he defied the gods and stole fire from them. He then gave it to humanity which started civilization.

The god Zeus was more than displeased that Prometheus stole the fire. He sentenced an eternal punishment to the Titan. Prometheus will be bound to a rock for all eternity, with an eagle eating his liver. The feathered visitor would return every day as his liver regrows overnight.

Prometheus would go through the same pain over and over again until Heracles came. The hero shot the eagle and released Prometheus from his chains. And with that, the Titan, being a great counsel, advised and made predictions about Heracles’s other adventures. He also helped the hero in one of his labors.