Ring shepherd moons help keep the shape of a planet’s ring. Remember that planetary rings are made up of dust, ice, and all kinds of debris suspended in space. Saturn’s rings move and orbit around it at different speeds. Because of the movement, particles can go off track and diverge from the ring. A shepherd moon comes to the rescue when that happens. 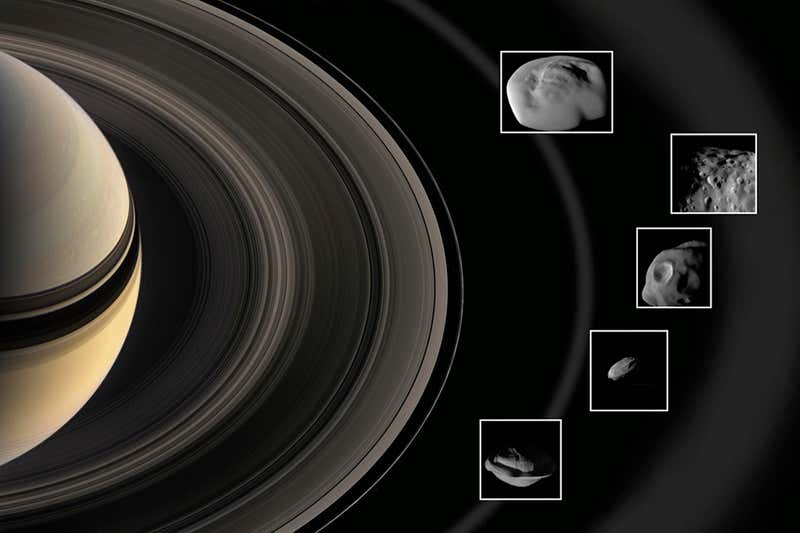 As shepherd satellites orbit their parent planet, they come across loose ring materials along the way. Those materials are deflected by the gravitational influence of the moons, keeping them in place. That sort of “kick” sculpts the edge of Saturn’s rings or keeps the ring gaps open. In a way, shepherd moons “herd” the ring materials of Saturn. These moons are also called herder moons and watcher moons.

Saturn has three moons shepherding the A ring. These are Pan, Daphnis, and Atlas. Pan and Daphnis are within the Encke gap and the Keeler Gap respectively while Atlas lies close to the edge of the A ring. The other two shepherds, Prometheus and Pandora, maintain the F ring. Though they are not as close to the rings as the others, the co-orbital moons Janus and Epimetheus also function as herder moons.

Ring shepherds are not only found in the system of Saturn. The other giant planets in the solar system, Jupiter, Uranus, and Neptune, keep their rings sharp with the help of their inner moons as well. Examples are Metis of Jupiter, Cordelia and Ophelia of Uranus, and Galatea of Neptune. 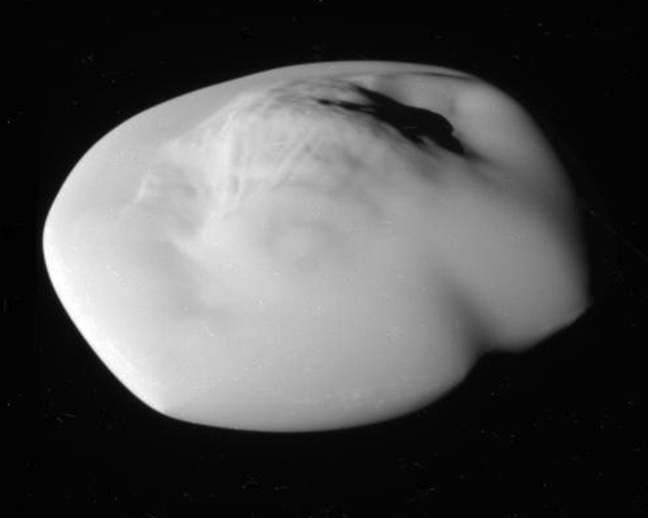 Atlas is a small moon of the gaseous planet Saturn. It is also known by the designation Saturn XV. Scientist Richard Terrile discovered this satellite in October 1980 from Voyager 1 images.

Atlas is one of the inner satellites of Saturn. It has an irregular shape which many likened to that of a flying saucer. The smooth edge of this moon stands in contrast with its rough and somewhat spherical core. It has a red spectrum but not as red as the moon Pan.

Atlas orbits close to the outer bounds of the A ring and helps maintain its outer edge. It acts as a ring shepherd, or so it was thought. Keeping the outer A ring sharp is a great responsibility, so this moon was named after the Titan Atlas. Surely, someone with an equally important task!

In Greek mythology, Atlas was given the obligation to hold up the weight of the sky forever on his shoulders. The same was also thought of with the namesake moon. It was later found out that the moon’s responsibility was not that big after all. It was discovered that the edge of the A ring is actually maintained by the co-orbital moons Janus and Epimetheus.

The satellites Janus and Epimetheus are larger than Atlas. Even though they lie farther from the A ring, it is their orbital resonance that keeps the ring’s shape in check and not the gravitational influence of Atlas.

With a diameter of 30 km, Atlas is smaller than Earth by about 421.9 times but nearly four times bigger than the moon Daphnis. Its estimated temperature is around 81 K, hotter than the other shepherd moons.

Atlas orbits around 137,000 km from its parent planet, Saturn. With an orbital period of 0.06 days, it takes this moon 14.4 Earth hours to complete one journey around the planet. It has a slightly eccentric orbit with an inclination of roughly 0.003°. Atlas is in a synchronous rotation with Saturn as it takes the same time for this moon to rotate on its axis and to orbit the planet. Its orbit is believed to be chaotic just like Prometheus and Pandora that perturb it.

In 2004, the Cassini probe discovered a certain part in the orbit of Atlas with an increased concentration of dust. It formed a thin ring that was given the provisional designation R/2004 S 1. A similar feature was also discovered around the region, between the orbits of Atlas and Prometheus. It was temporarily designated R/2004 S 2. The two thin rings are in the Roche Division or the area between the prominent A ring and the narrow F ring.

At first look, the moon Atlas looks like an alien spaceship floating in space. This flying saucer-looking moon is characterized by an equatorial ridge that was also observed in other shepherding moons. And just like Pan and Daphnis, the ridge is accreted material that Atlas has accumulated as it tended to the A ring. 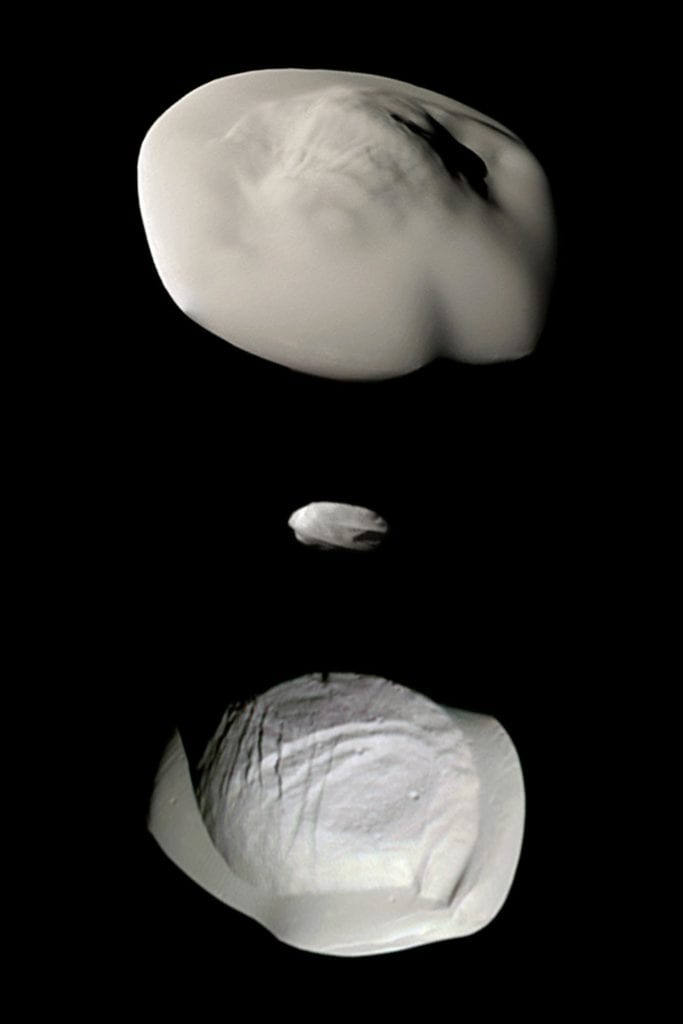 The image above shows the small ring moons (top to bottom), Atlas, Daphnis, and Pan at the same scale. Atlas has about the same size as Pan. Both moons also have prominent equatorial bulges.

Pan’s ridge is rough, probably caused by the presence of some craters, but Atlas’s is overall smooth. The smooth edge is somehow made from the accretion of some fluffy material, most likely from Saturn’s ring. It also reveals some soft, pointy features. The buildup was concentrated around the equator because of the thinness of the ring.

Richard John Terrile is a scientist who works for the Jet Propulsion Laboratory (JPL) of NASA. He, together with the Voyager 1 team, discovered Atlas in 1980. They studied the images sent by the Voyager 1 during its flyby to Saturn. The probe’s closest approach to the planet was on November 12, 1980, when it was around 124,000 km away. 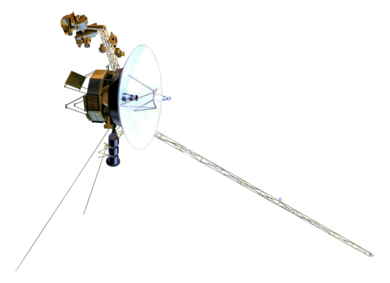 The Voyager program, which gave way to the discovery of Atlas, has been sending data and information back to Earth for more than 40 years. The twin probes, Voyager 1 and Voyager 2, were launched in 1977.

The probes have traveled into space where no manmade craft has reached before. After studying the gas giants and the moons of Jupiter and Saturn, they have impressively explored far beyond their initial tasks.

Both crafts have left the heliosphere and are in interstellar space now. They are still in the solar system and have not gone past the Oort Cloud. The Voyager program has been the longest-running mission of NASA. 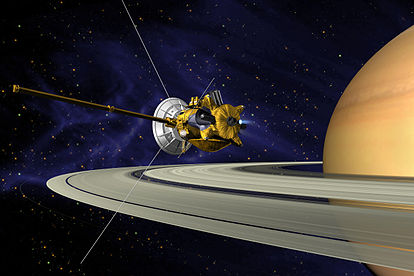 NASA’s Cassini spacecraft provided us with close-up images of the moon Atlas. The best photo that we have of this small moon was taken by the probe during its flyby on April 12, 2017. It was Cassini’s closest approach to Atlas when it was just 11,000 kilometers away from the moon.

The resolution of the images is about 84 meters per pixel, giving scientists a more detailed look at the moon. No close encounter on Atlas followed as Cassini had to end its mission in September of the same year.

Still, the mission was more than successful as it provided many important findings of the Saturnian system. It revealed that two of its largest moons, Titan and Enceladus, contain liquid water just beneath the surface, making them candidates in supporting life.

The moon was given the provisional designation S/1980 S 28 upon discovery. Three years later, in 1983, it was officially given the name Atlas. The name was chosen because the little moon was long believed to be the one responsible for grooming the outer A ring—a heavy task comparable to the duty of Atlas in Greek mythology. 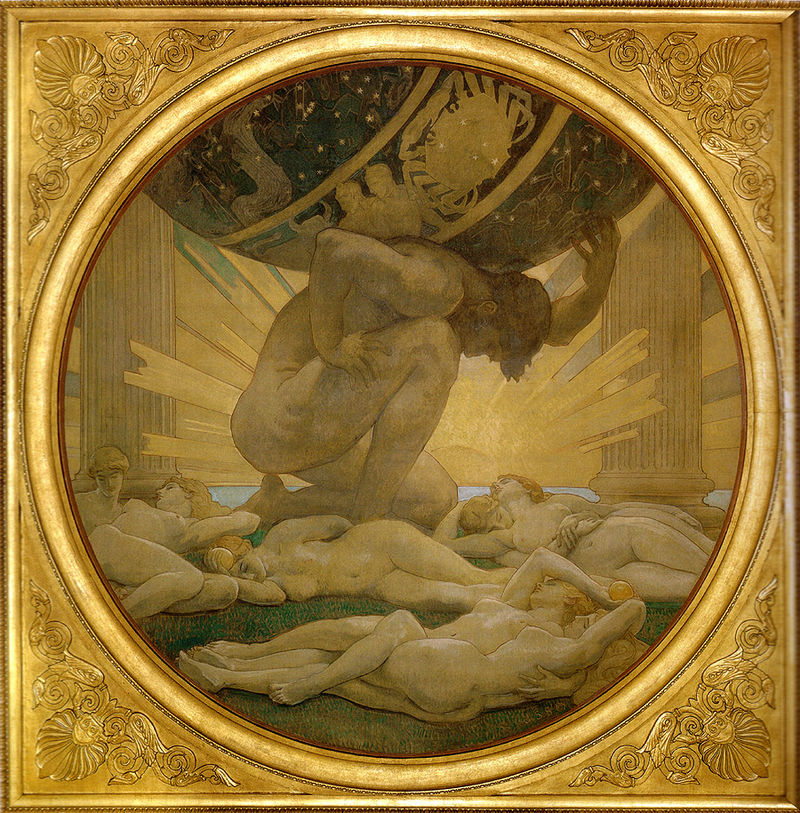 Atlas was the son of Iapetus and Asia (or Clymene). He was punished to hold up the skies forever after siding with the Titans in the ten-year battle known as the Titanomachy. When the Olympians won the war, Zeus made him the everlasting bearer of the sky. He was to carry it on his shoulder forever unless someone willingly takes it away from him.

Another story that mentioned Atlas was in the twelve labors of Heracles (Roman: Hercules).

In the eleventh labor, Heracles needed to steal some golden apples. But they were heavily guarded by the daughters of Atlas, called the Hesperides (also Atlantides), and the fearsome dragon Ladon.

Heracles previously helped the Titan Prometheus by shooting the eagle that was pecking at his liver. Grateful, Prometheus said that his brother Atlas would be able to help Heracles with his labor.

True enough, Atlas was willing to help with the apples but on one condition. Heracles should hold up the world in his place while he was dealing with the task. Little did Heracles know that Atlas was devising ways to make him carry the heavens forever.

Atlas volunteered to deliver the apples himself. Sensing the trickery, Heracles managed to convince the Titan to take the burden back for some minutes because he needed to arrange something first. When Atlas took the sky back, Heracles found the perfect opportunity to run away with the apples.

More About Atlases and Moons

As we may have observed, we call the collection of maps atlas. The association of the name started around the 16th century. Geographer and mapmaker Gerardus Mercator coined the term in honor of the Titan as according to him, Atlas was the “first great geographer.” A picture of the Titan carrying his burden could be seen on the cover of the collection of maps that he published.

Just like it was on Earth in the early days, humans have been charting the solar system for years. One of the most significant events in history is the landing of the Apollo 11 mission. It brought the first man on the moon on July 20, 1969. That first step into the lunar surface became just the beginning of the many to come, including missions to other moons of the solar system.

In celebration of the 50th anniversary of the Apollo mission in 2019, National Geographic released the Atlas of Moons. It is an interactive map of the rich and diverse moons of the solar system. We can explore more into the major moons as they are featured in interactive 3-D globes. Indeed, a more exciting way to learn about their orbits and see what they look like.

Another great resource for all things about Earth’s natural satellite is the Lunar Orbiter Photographic Atlas of the Moon. Its photographic coverage reveals surface features and other information that expert and amateur astronomers will find helpful.