A trojan moon – such as the Helene Moon – is named in reference to trojan asteroids. Though the two involve different types of celestial bodies, they both engage in a similar orbiting-sharing relationship with larger bodies.

The concept of the Lagrange Points is the common denominator among trojan bodies.

The Lagrange points (also called Lagrangian points) are positions in space that are a result of the gravitational forces of two large bodies. The concept was named after Josephy-Louis Lagrange, an Italian-French mathematician. There are five such points, designated L1 to L5.

The Lagrange points can be found in the Sun-Earth relationship and the Earth-Moon system. It also exists in systems such as the Sun and the other planets in the solar system, and these planets and their large moons.

Objects near the Lagrange points tend to stay in place as a result of the forces exerted by the two orbiting large bodies. Attraction and repulsion are strong in these areas which affect the orbit of a third object that lies close to these points. But not all of these points are stable, only two of them are, the other three are not.

The unstable Lagrange points are L1, L2, and L3. L1 is located between the two massive bodies while L2 and L3 are situated behind them. The stable points are L4 and L5.

Though they are unstable, L1 and L2 have been useful for spacecraft and artificial satellites that we send to space. They are like the perfect “parking spots” for these objects. They allow satellites to stay in position without consuming much of their fuel, thanks to the gravitational forces of the two large bodies in the system.

Remember that even though L1 and L2 are great “parking spots,” they are still unstable. Their instability lasts about 23 days so satellites orbiting these points have to adjust and correct their positions every now and then. No man-made spacecraft has stayed in L3 because it stays hidden by the Sun.

The stable Lagrangian points are L4 and L5. We can form two equilateral triangles if we try to connect these points and the two large bodies.

It is common for objects to gather around the stable points. They follow the same orbit and move relative to the bigger bodies. In the Sun-Earth system, for example, objects in L4 and L5 lie 60 degrees ahead and 60 degrees behind Earth, respectively. It is for this equilibrium that collision is avoided.

We call the objects that lie in, or close, to the stable Lagrangian points “trojans.” 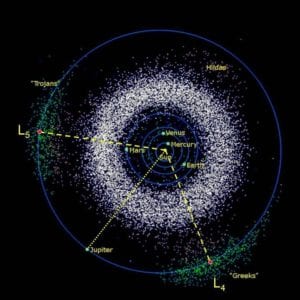 The most famous examples of these astronomical bodies are the two big swarms of asteroids that share an orbit with the gas giant, Jupiter. The leading group of Jupiter trojans is called the Greek Camp while the trailing group is called the Trojan Camp.

Natural satellites that stay in the stable Lagrangian points are called trojan moons. So far, there are only four of them known in the solar system. They are all found in the Saturnian system.

The major moon Tethys has two trojans moons, Telesto and Calypso. Dione also has a pair of leading and trailing trojans, Helene and Polydeuces. 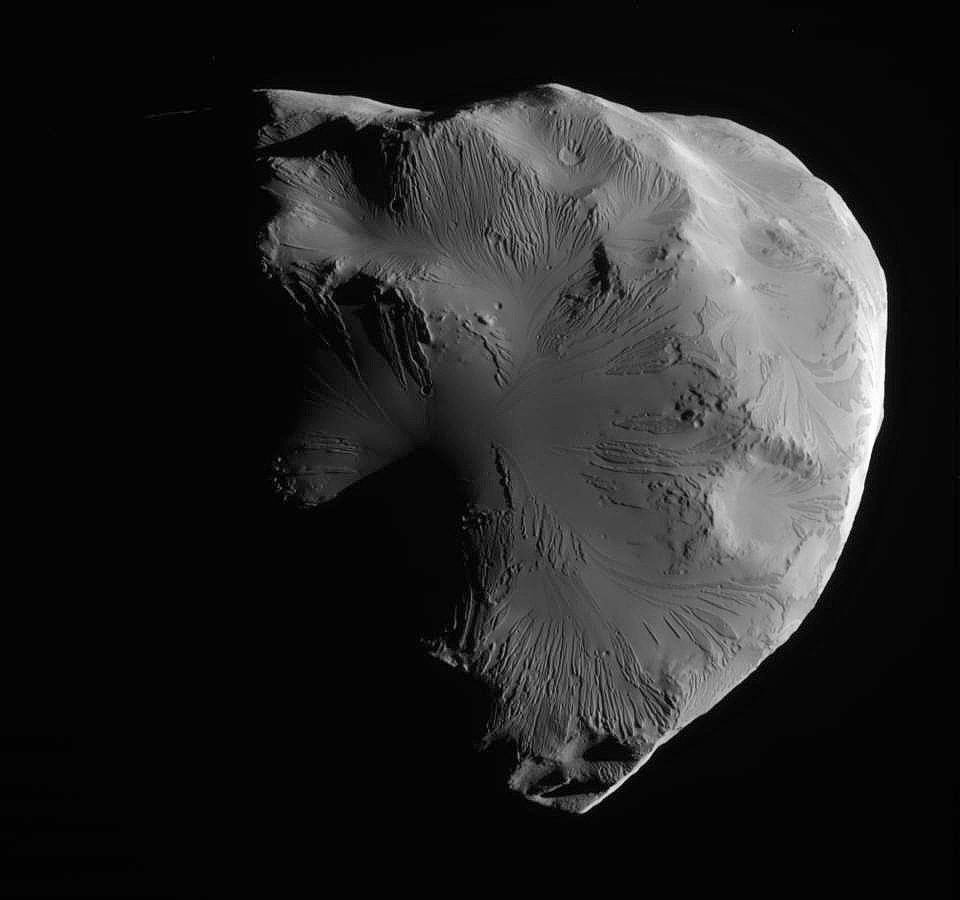 Helene is a natural satellite of Saturn discovered in 1980. It is also called Saturn XII and Dione B. The latter name was given because Helene is the leading trojan of the larger moon Dione. Another moon sharing the orbit with Dione is Polydeuces, which is 60 degrees behind. This three-moon system is in the inner part of the E ring.

Ground-based observation gave way to Helene’s discovery. It was supported by images taken later by Voyager flybys. Astronomers were able to take a close-up look at its surface through the Cassini-Huygens mission.

In 2004, Cassini arrived at Saturn and captured never before seen features and details of its moons. The probe’s closest approach to Helene was on March 3, 2010, when it was about 1,800 km away from the moon (photo above).

The moon Helene was discovered on March 1, 1980. It was discovered by French astronomers Pierre Laques and Jean Lecacheux. Considering that this moon is so far away in the system of Saturn, they were able to observe it from the ground because of Saturn’s ring-plane crossing. During that time, the planet’s rings appear edge-on here on Earth.

Helene was discovered at Pic du Midi Observatory in France. The discoverers used an electromagnetic camera and a telescope to observe this small moon. Before it was given a permanent name, it was assigned the provisional designation S/1980 S, as it was the sixth natural satellite of Saturn discovered in 1980. 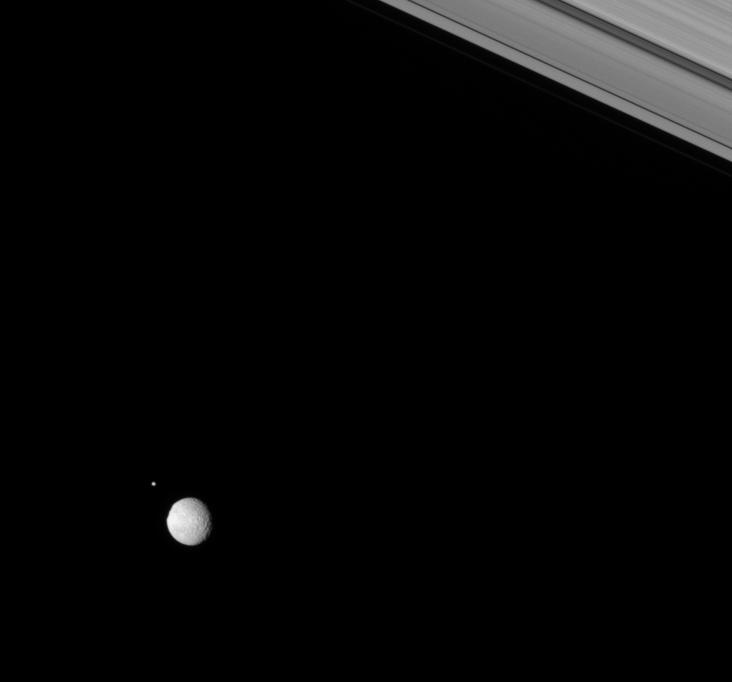 About a year later, on August 25, 1981, Voyager 2 passed the ringed planet and was able to take a picture of Helene (shown above). This image taken from space confirmed the discovery and existence of this moon of Saturn.

A photo taken by Cassini in 2007 shows Helene alongside another Saturnian moon, Mimas. The stark difference between their sizes is clear as Mimas is more than 10 times larger than Helene.

Helene has been dubbed an “Ice Queen” because of its snowy-like surface. It is believed that the grain particles on this moon’s surface are between the sizes of 1 to 100 micrometers. It is for this reason that the moon has a high reflectivity rate (albedo).

Enceladus contributes to the high reflectivity of the moons within the E ring. Aside from forming the tenuous ring, the jets of water ice that it produces gets accumulated on the surface of other moons, thus increasing their albedo.

Helen’s orbit is 0.199° inclined to Saturn’s equator. This moon moves in a prograde motion, along with the other trojan moons. It orbits the ringed planet at a distance of about 377,420 km. It has an orbital period of 65 hours or more than 2.5 Earth days.

Helene belongs to the trojan group of Saturn’s moons. As the leading trojan of Dione, it lies in the bigger moon’s L4 Lagrangian point. 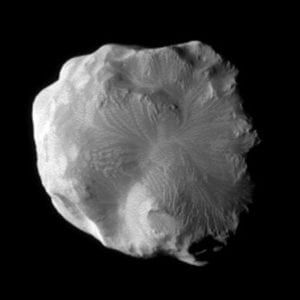 Helene ‌is‌ ‌very‌ ‌much‌ ‌like the small moons of Saturn. It is irregularly shaped as it does not have enough mass and gravity to make it ‌spherical. Images sent by the Cassini spacecraft reveal extensive depression on its surface. They range in size from 2 to 10 km.

Minor craters were observed on the moon. The reason for their small size is most likely that they were slightly buried by the accretion of materials over the moon’s surface.

Grooves are prominent on Helene’s surface. It is an indication that the moon is undergoing series of geologic and surface activities. Flow-like features were also found, which made astronomers believe that the moon is experiencing erosion and other mass-wasting processes.

The names of Saturn’s moons were originally based on the mythological Titan Kronus and his brothers and sisters. But as more of them are getting discovered, the International Astronomical Union (IAU) also draws inspiration from other characters of Greek mythology.

The moon Helene was named after Helen of Troy. This permanent name was assigned to the small moon in 1988. Helen was mentioned in Homer’s most enduring works, the Illiad and the Odyssey.

Beautiful Helen was the daughter of Zeus and the Aetolian princess Leda. The two met each other when Zeus, who transformed into a swan, was being chased by an eagle. 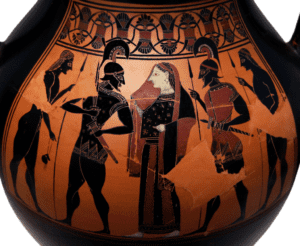 Helen’s birth was unusual. She came out of an egg since Zeus was in the guise of a swan during his time with Leda. Her other siblings and half-siblings are Castor and Pollux, Clytemnestra, Phoebe, Timandra, and Philonoe.

Helen was known as the world’s most beautiful woman. Suitors all around the world came to ask for her hand. In the end, she married Menelaus, the King of Sparta. They had a daughter named Hermione.

The Trojan War started with the contest among the three goddesses Athena, Aphrodite, and Hera. Trojan Prince, Paris, was called to solve the dispute and choose the most beautiful goddess among the three. 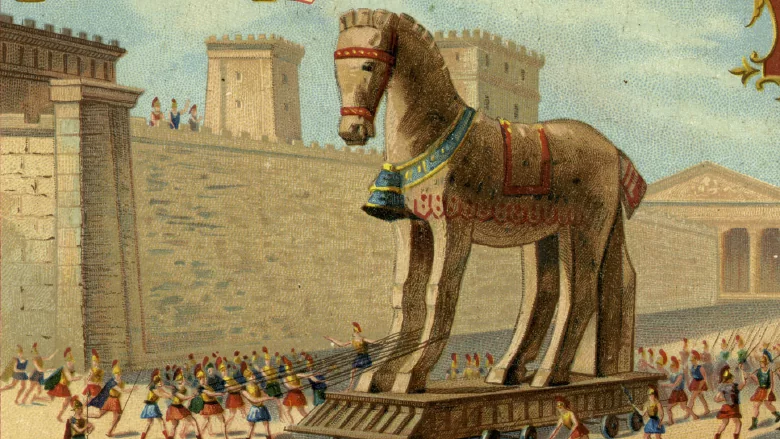 Each goddess was keen on winning that each of them offered a gift to Paris in exchange for his favor. The prince chose Aphrodite, who promised him the most beautiful mortal woman.

Helen was then abducted by Paris. But other versions of the story states that she willingly eloped with Paris.

Helen’s disappearance caused the Trojan War to break out. Fleets of ships sailed to Troy to rescue the queen of Sparta. The war lasted for about 10 years. It ended with the Greeks winning by devising the Trojan horse.