How many moons does Saturn have? – Saturn’s moons are not equal in fact they are of several different sizes. Only 53 of the 62 Moons of Saturn are currently named and approved by the International Astronomical Union, the IAU. Saturn’s moons and Jupiter’s moons are more numerous than the other Planets. The one we are interested in for this post is the Mimas moon, which is an inner moon of Saturn.

What is an inner Moon?

An inner moon is also referred to as an inner natural satellite. When astronomical bodies such as moons and satellites orbit a planet they do so in one of two directions, known as:

These inner satellites/moons differ from other satellites as they are located closer to their parent astronomical body. They are usually smaller with a low density, and take a shorter time to orbit their Planet than regular satellites. 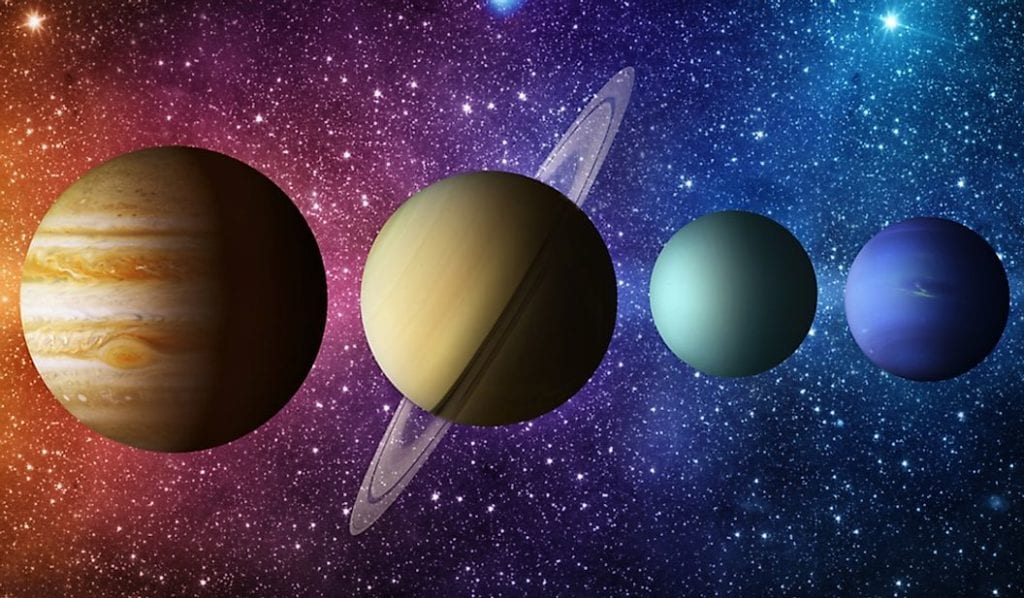 There are four giant planets in our solar system: Jupiter, Neptune, Uranus and Saturn.

Each giant Planet has inner moons orbiting them.

There are 30 inner moons/satellites currently identified with these 4 Planets. They were formed at the same time as their Planet.

They are small and difficult to see by naked eye from Earth as they suffer from glare or reflection from their Planet.

Saturn is the second largest Planet in our solar system and the 6th furthest from the Sun.

It is probably mostly recognized as the large Planet with rings, Saturn’s Rings. There are 14 sub-divisions of its rings with the widest ring, the B ring, measuring 25,500 km.

There is not just one moon of Saturn, it has a total of 62 moons in orbit around it and most are small with a low density. Of the 62 moons orbiting Saturn, only 7 are major moons.

The 7 major moons of Saturn are: 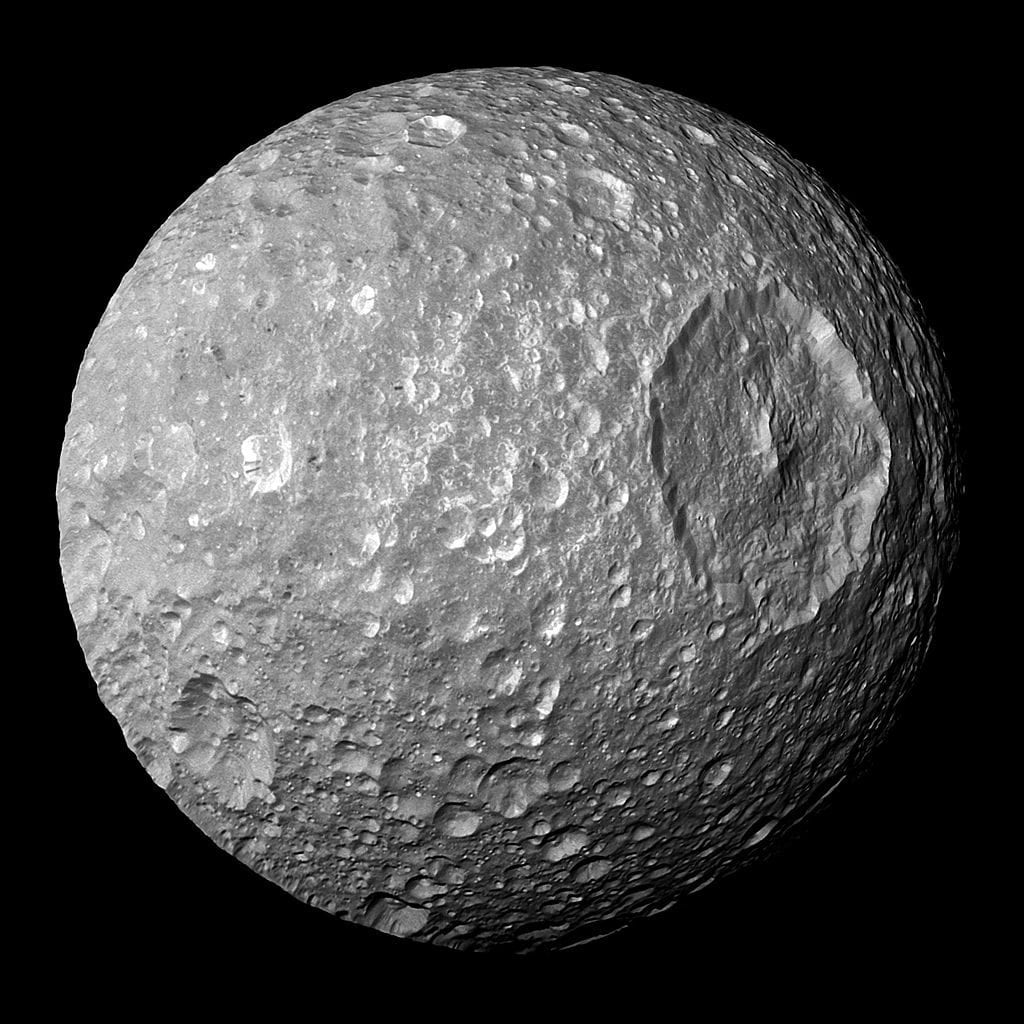 Mimas, also known as ‘Saturn i’, or the ‘Death Star Moon’, is the innermost of the major moons of Saturn.

Mimas was one of the moons of Saturn discovered in 1789 by the German-born English Astronomer William Herschel using a 40 foot reflector telescope. Following his death in 1822, his observations and astronomical work continued by his son John Herschel.

How were the inner moons of Saturn discovered?

Saturn’s moon Mimas and the other moons of Saturn have been observed and photographed in detail over the years by NASA spacecraft flybys by ‘Voyager’, (Voyager 1, Voyager 2), and NASA’s Cassini spacecraft.

FACT: E.E. Barnard discovered the very first inner moon/satellite in 1892. It orbits the Planet Jupiter and is called Amalthea.

In 1966 the Saturnian moons – Janus and Epimetheus – were first observed. They are interesting as they share the same orbit, which initially caused come confusion. Could there really be two moons in the same field?

We are grateful to NASA for its variety of inner moon images, which helped clarify the positions and movement of these Saturnian moons.

As some of the inner moons of Saturn are not visible by naked eye we rely on observations from various Nasa missions for details.

It was Pioneer 11 that carried out the first flyby of Saturn in 1979 and then Voyager completed another flyby. This provided further detailed photos of the Planet Saturn and Saturn’s moons.

NASA has been instrumental in completing several successful missions into Space to observe the Planet Saturn, Saturn’s rings and Saturn’s moons.

FACT: NASA aims to explore, discover and expand our knowledge for the good of mankind. As well as facilitating space missions, via Voyager and Cassini, it has a National Lab in Space.

Saturn’s Moon Mimas is not large enough to form a completely round shape as held in place by its gravity. Instead it is more ovoid (or egg shaped) in form with a large crater imbedded in its surface.

It is similar in shape to a large eyeball. The pupil part of the eyeball is indented and this represents the large crater on the surface of this moon, called the Herschel Crater, named after its discoverer Herschel.

How does a Moon get its name?

Moons are normally named by or after the person or body that discovered them.

It is believed that John Herschel, son of the discoverer, astronomer William Herschel named the first 7 Moons of Saturn. He gave this innermost moon of Saturn the name ‘Mimas’, although it is also referred to as ‘Saturn i’.

Mimas is named after the son of Gaia from Greek Mythology. Gaia means Earth in Greek. Mimas was a mythical giant who was killed in the war fought between the gods of Olympus and the Titans. It is believed he may have been struck by one of Zeus’s lightning bolts. The name Titan was also used to name another of Saturn’s moons.

It was Giovanni Domenico Cassini, in 1675, who discovered that the ring of Saturn was not one single ring, but rather it was formed from several smaller rings.

The rings are named from A to G, in the order in which they were discovered and are not solid rings but have gaps in between them. The closest ring to Planet Saturn is C Ring, then B Ring, followed by A Ring.

This gap is known as the ‘Cassini Division’.

Physical Characteristics of the Mimas Moon

The surface temperature of Mimas is around -200 degrees centigrade

The average orbit distance from Mimas to the center of Saturn is 185,540 km, and it takes Mimas the equivalent of 0.92 Earth days to orbit Saturn and the eccentricity of orbit is 0.0196.

FACT: Eccentricity is the measure of the deviation of the Earth’s orbit from a circular object. Using the scale where 0 is a circular orbit up to 1, which is a highly elliptical orbit (HEO), more like an oval shape.

Mimas is the innermost moon of Saturn and with a diameter of around 250 miles (392 – 400 kilometers) it ranks as the smallest rounded astronomical body that is held together by its own gravity.

Many of our images showing the detail of the surface, shape and possible density of Mimas is thanks to the efforts of the NASA Cassini spacecraft missions.

The Cassini spacecraft travelled close to Mimas on its 2010 flyby mission, getting as close as 5,900 miles (9,500). In Space terms this is quite close!

Mimas is a very bright moon as its surface is primarily covered in water ice and this becomes reflective when sunlight makes contact with it. It is estimated that it reflects over 80% of this sunlight source.

The surface of Mimas looks pitted or a bit like a golf ball as it is roughly circular and covered in large craters, indents and potholes.

NASA’s Cassini spacecraft during its flybys has captured detailed images of this Moon. The bright crater walls have streaks and darker regions underneath.

The surface of Mimas and other Saturnian moons is a mix of ice and dark impurities. It is thought that these darker areas were caused by parts of the ice surface on the lower areas of the large crater walls, evaporating and therefore allowing darker impurities to seep inside.

These impurities can appear like dark streaks, below the outer edge inside the Crater. All these markings have occurred through a series of melts of the ice and movement and mixing of debris, followed by another freeze.

Generally the inside of the Herschel crater is less cratered that the rest of the surface of the Mimas Moon of Saturn.

This moon has low density of around 1.15 times less dense than that of water, meaning it could be formed almost entirely from water ice, and perhaps some silicate rock, and its surface having the appearance of water frost.

This means that if there was an area of water large enough around Mimas it would float.

Mimas remains as a spherical, egg shape due to its gravity and is the smallest object in our solar system existing under such gravitational formation.

Notable Features of the Mimas Moon

Perhaps its most notable feature is a large crater on the surface named the ‘Herschel Crater’.

The Herschel Crater, named after its discoverer, is one of the largest impact craters, or structures in the solar system, relative to the size of its parent body. It is approximately 130km in diameter. This suggests that whatever collided with Mimas was very large.

It is also believed that this massive impact on Mimas may have sent shock waves through the body of Mimas to the other side of this moon and caused fracture lines.

The Cassini spacecraft made an unusual discovery in its 2010 mission without an explanation. It appears that Mimas has a thermal anomaly where the regions that are heated by the Sun actually have the coldest surface temperatures.

Mimas orbits Saturn in a prograde/direct motion direction following in the direction of the rotation of Saturn. Its orbit is almost circular and covers an average distance of 115,277 miles (185,520 kilometers).

This orbit of Saturn takes less than 24 hours and during this time it is facing the direction of the Sun the whole time.

This orbit position is described as being tidally locked to the Planet.

Mimas and another Saturnian moon Tethys are in an orbital resonance together. This regular resonance when they are closest occurs on the same side of Saturn each time.

The Geography of this Moon

This moon Mimas is unusual as it is almost entirely composed of ice, its covered in craters, of all shapes and sized and not uniform at all. It is bright reflecting sunlight on its icy surface.

It is the innermost moon of Saturn.

Mimas wags and wavers like most other moons. This perceived movement (an oscillation in its orbit) when viewed from Earth is known as the Moon Liberation.

The moon liberation effect changes our perspective when we look at the moon and it appears to change its shape before our eyes.

This liberation leaves scientists thinking that the inner part of Mimas is not uniform. It is therefore possible that there could be a liquid ocean, or an uneven rocky part in the core-mantel boundary in this Moon.

The Moons of Saturn are all quite different, in size and shape depending on their own gravity.

Pandora is a tiny moon in comparison with Mimas, and is another Moon of Saturn. As it is small it does not have enough gravity to pull it into a round shape like Mimas, so it has an elongated shape instead.

Mimas is credited with clearing material, always in the same direction, from the Cassini division or gap between the B Ring and the A Ring, two of the widest of Saturn’s rings.

Fun Facts at a glance: