Deimos (pronounced DEE-MOS) is the second moon orbiting the planet Mars along with Phobos. It is considered the second moon of the red planet because its orbit path is much further away than Phobos.

Deimos is also the smaller of the two moons with a diameter of just 12.4 km (7.7 miles). Unlike our Moon which orbits the Earth, Deimos has a very strange shape. It is not spherical like the other moons in the solar system.

Deimos would appear at a similar size to a star when viewed from the surface of Mars.

The moon is so tiny that it would appear in the sky at a size similar to a star. In fact, when Deimos eclipses the Sun, it appears as a small dot moving across its surface. At full moon, Deimos shines about as brightly as the planet Venus, which is one of the brightest objects in our solar system.

It takes Deimos 30.3 hours to orbit around Mars.

The orbit path of Deimos around Mars is almost circular. It travels around the equatorial plane of the planet in 30.3 hours, which is nearly 6 hours longer than a day on Mars.

The moon is named after the son of the Greek god of war, Ares. The name Deimos means “terror.”

In Greek mythology, Deimos is the son of Ares, the Greek god of War and is the personification of terror. He was known to join his father in battle along with his twin brother, Phobos, which is the name of the first moon of Mars.

The shape and composition of Deimos suggest that it may be an asteroid. The giant planet Jupiter may have pushed it from the asteroid belt and it was pulled into orbit by the gravity of Mars. However, the orbit path of this moon is circular and stable and would require braking by the atmosphere. It deepens the mystery even more because Mars is known to have a thin atmosphere.

Deimos rises in the east and sets in the west once every 2.7 days.

The orbit of the moon (30.3 hours) is greater than a Martian day (24.7 hours). Because of that, the moon only rises and sets once every 2.7 days to an observer on the surface of Mars. Meanwhile, Phobos orbits so quickly and rises in the west and sets in the east.

Deimos is moving away from Mars.

Unlike the moon Phobos, which will collide with Mars in 50 to 100 million years, the orbit of Deimos is actually taking it further away from the red planet. Eventually, the moon will be cast off into space when it gets too far from the gravity of Mars to remain in orbit.

The average temperature of Deimos is -40°F.

Deimos has been studied by a number of different spacecraft.

The first craft to explore Deimos and Phobos was the Mariner 9 in 1971, which became the first spacecraft to orbit a planet. The moon has also been explored by the Viking Orbiters, the Soviet Phobos 2, NASA’s Mars Global Surveyor, the European Mars Express, and the ground rovers Spirit, Opportunity, and Curiosity.

Deimos Moon: A Quick Look at the Numbers 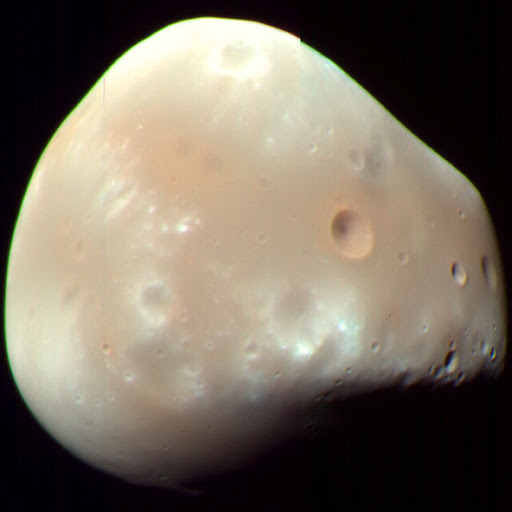 The moon Deimos is designated Mars II. It is one of the two natural satellites of Mars, the other one being Phobos. Deimos is the smaller one between the two moons. It lies farther from the red planet too. It was discovered by the American astronomer Asaph Hall III in 1877.

The semi-major axis of Deimos is 23,458 km. Its periapsis and apoapsis (nearest and farthest point) from Mars are also about the same because it has a nearly circular orbit. It has an eccentricity of only 0.00033.

With an inclination of only 0.93°, we can see that the orbit of Deimos lies very close to its planet’s equatorial plane. It takes about 30 hours for this moon to complete a trip around Mars. It is tidally locked so it shows just the same face to its parent planet.

Deimos is moving away from Mars because its orbit is slowly getting bigger. Tidal acceleration and its distance from the planet have something to do with this. It will move farther and farther away until it goes beyond Mars’ gravity in the far future.

Looking at its physical characteristics, Deimos is one of the smallest moons in the solar system, with a mean radius of only about 6.2 km (3.9 mi). It is 280.2 times smaller than the Earth’s Moon. Let’s see how it compares to the other astronomical bodies of the Martian system.

Size of Deimos compared to Mars

Size of Deimos compared to Phobos

Deimos is also smaller than its twin moon Phobos. The innermost moon Phobos measures 22.2 km (13.8 mi) across, so Deimos is smaller by 1.8 times. 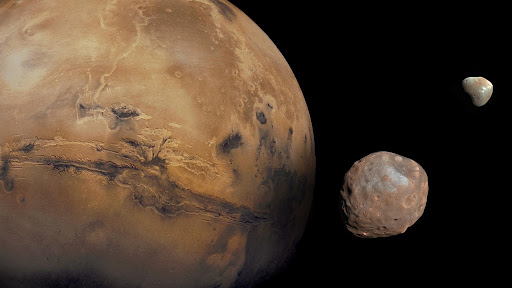 Deimos was discovered by Asaph Hall on August 12, 1877. He also discovered Phobos six days later after continuing the search for Martian moons. The American astronomer made the discovery at the United States Naval Observatory using a 26-inch refractor telescope.

Mars is the Roman equivalent of Ares in Greek mythology. Because of that, the moons are also named after characters that are related to him in stories. It was the chemist Henry Madan who suggested that the moons be named Phobus and Deimus. The spellings were changed but the convention was still followed.

The origin of Deimos is still a mystery. One theory is that it might be a captured asteroid since it shares a lot of physical characteristics with D-type and C-type asteroids.

The gas giant Jupiter may have pushed it from the asteroid belt, then it was caught by the gravity of Mars. Its orbit just became more circular over time because of tidal forces or even atmospheric drag.

Another hypothesis states that the moon may have simply formed through accretion. In this process, an astronomical object forms through the accumulation of particles. This theory is also used to explain how other objects form, like stars and planets.

Aside from the two main theories, another explanation could be that Deimos and Phobos are from the same parent body that experienced collisions. It may have shattered in the process, ultimately forming the two moons.

Visits to the Martian System

The red planet is such a favorite subject for space exploration. Spacecraft from different countries are in the Martian system right now, collecting data on the planet and its moons. Several landers and rovers have reached the surface of Mars, but none has landed on Deimos yet. 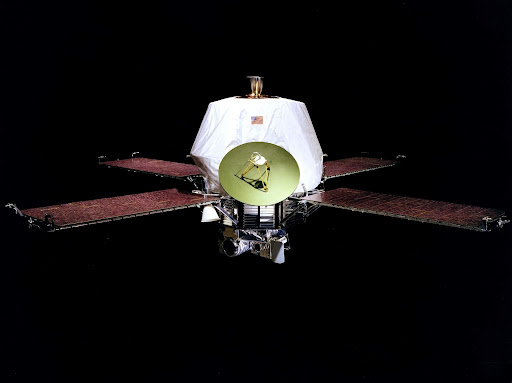 Mariner 9 made history as the first spacecraft to orbit Mars. In fact, it was the first to do so on another planet. Because of that, it provided us with the first detailed views of Mars and its moons Deimos and Phobos.

This mission was launched on May 30, 1971, and it entered Mars’ orbit on November 14 of the same year. It was successful in its mission, staying in contact for a year and four months.

Several spacecraft headed to Mars in 1971. The Soviet probes Mars 2 and Mars 3 launched days earlier but they arrived weeks later than NASA’s Mariner 9.

The Viking orbiters, Viking 1 and 2, were launched in 1975 to study the system further. At a distance of 30 km (19 mi), Viking 2 was able to snap photos of Deimos and its surface. It showed some distinct craters caused by meteorites. Most of them are covered with regolith around 50 meters in thickness.

The Soviet Phobos program also aimed to study the Martian system and its moons. The two probes, Phobos 1 and 2, had a successful launch in July 1988. However, Phobos 1 malfunctioned and got lost on its way to Mars. Phobos 2 reached orbit but it also lost contact and was not able to complete its mission.

Had the first probe succeeded, Phobos 2 would have made further studies of the Deimos moon. It was the last space probe developed by the USSR.

The Mars Global Surveyor (MGS) launched in 1996 and studied the red planet and its system even further. In 1997, there was a proposal to specifically study the moons Phobos and Deimos. It was called the Aladdin mission. However, the mission did not push through, and the MESSENGER probe to Mercury was the one granted to fly. 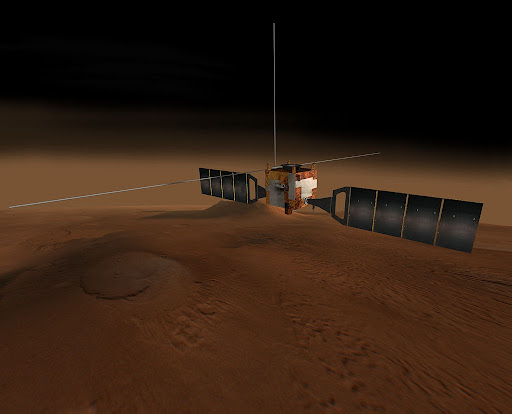 In 2003, the European Space Agency’s (ESA) Mars Express launched and it has been exploring Mars for 18 years. It was granted an extension until 2022. 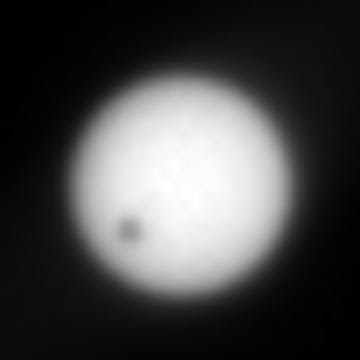 Mars rovers and landers also provided us with important data about Deimos and the Martian system as a whole. The Opportunity rover snapped photographs of Deimos as it transited the Sun as seen from Mars.

Because of the moon’s small size, it only covered a small part of the Sun and did not result in an eclipse. The little moon only looked like a dark spot that moved quickly across the surface of the bright Sun.

In 2005, the Spirit Mars Exploration Rover photographed the two moons, Deimos and Phobos, as they raced across the Martian night sky. They were seen traveling with the Sagittarius constellation as their background. Stickney, the largest crater of Phobos, can be seen in the inset above. 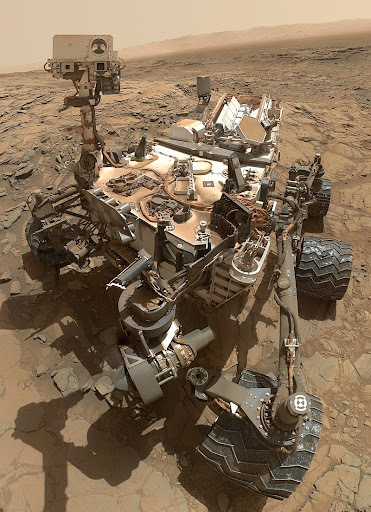 Currently, there are three active rovers on the surface of Mars. Two of them are NASA’s Perseverance and Curiosity. The latest addition is the Zhurong rover of the China National Space Administration (CNSA). The InSight lander has also been active on Mars for more than two Earth years as of September 2021. In Mars days, it has been up and running for 989 sols.

Some sample-return missions dedicated to the Deimos moon were conceptualized. One was called Gulliver, and the other was OSIRIS-REx 2. The Phobos And Deimos & Mars Environment (PADME) mission would also have uncovered more information about the two moons of Mars. However, it lost funding to other missions. 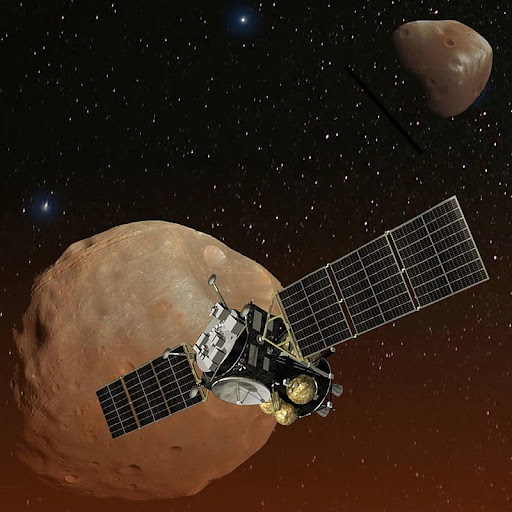 Though lots of missions that targeted Deimos and Phobos were canceled, the mysteries of these two moons will soon be revealed. The Mars Moons eXploration (MMX) mission of the Japan Aerospace Exploration Agency (JAXA) is planned to kick off in 2024. Aside from surveying the two moons, it will also bring back a sample from the bigger moon Phobos to Earth.

Geography of the Deimos Moon 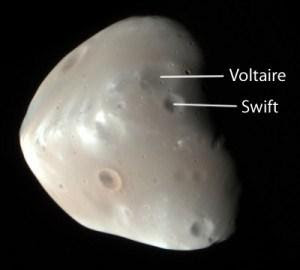 Deimos has a non-spherical shape that makes it look like a potato. There are craters on its surface but they are mostly filled with regolith, which might have formed through meteorites impact.

As seen by the Mars Reconnaissance Orbiter, it is relatively smoother than its twin moon Phobos. The surface of Deimos does not have grooves and ridges and its craters are also smaller in size.

There are only two craters on Deimos that were given names, Swift and Voltaire. The Swift crater is around 1 to 3 km (0.62 to 1.86 mi) across while Voltaire is about 1.9 to 3 km (1.2 to 1.9 mi) in diameter. They were named after two writers who previously speculated that Mars has two moons, even before their discovery.

Swift was named after Jonathan Swift, the author of Gulliver’s Travels who wrote about the two moons of Mars in 1725. That was 151 years before they were discovered!

On the other hand, Voltaire is named after the French writer François-Marie Arouet who was better known by the pen name Voltaire. He mentioned in his story titled Le Micromégas that Mars had two natural satellites, even before the moons’ discovery.

Deimos Moon: The Mythology of the Name

The name Deimos means “dread.” In Greek mythology, he was the personification of terror. He was the son of Ares, the god of war, and Aphrodite, who is associated with love and beauty.

Deimos has a twin brother named Phobos, who represents fear and panic. The two of them accompany their father Ares in battle. It is said that the two drive their father’s chariot and spread fear and dread to everyone they pass by. The mere mention of their names would even terrify soldiers.

Aside from Phobos, Deimos’ siblings include Erotes, Phlegyas, Harmonia, Enyalios, Thrax, Oenomaus, and the Amazons. His Roman equivalent was Metus or Formido. 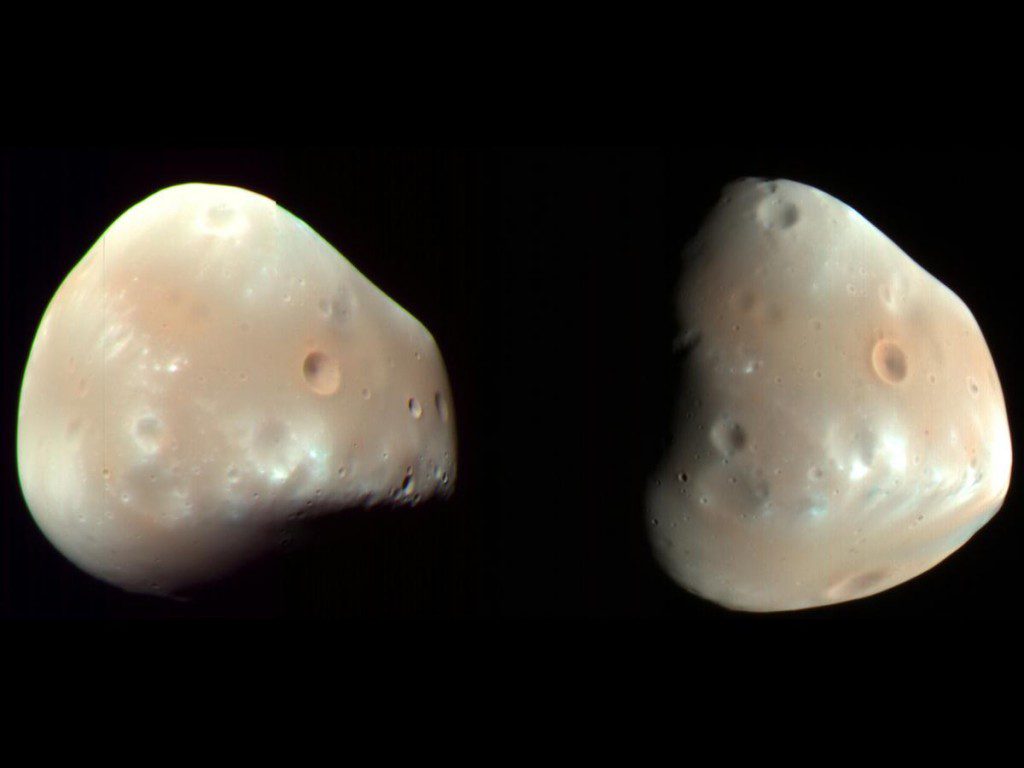