Before we get into detail about the Alpha Monocerotids meteor shower, let’s wind it back a little and explore what a meteor shower is in general.

What is a Meteor Shower? 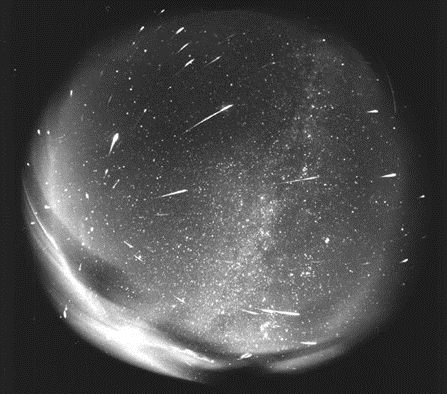 A meteor shower is a captivating event that we can see in the night sky. It looks like a rain of stars that is why we often call them “shooting stars” or “falling stars.”

Seeing the magnificent display of a meteor shower does not require a telescope or any equipment. We are all set as we can just see them with the naked eye. But what really is a meteor shower and why does it happen?

Space is littered with cosmic debris. An example of this is comet dust or trails left behind by comets. We call them meteoroids. Their size can be as little as a grain of sand or as wide as a one-meter object. They float and wander around the solar system.

Sometimes, these celestial bodies come in contact with the Earth’s atmosphere. Friction occurs between these bodies and the atmosphere as their atoms and molecules collide. It produces the bright “shooting stars.” They also travel at such a high speed. These bright streaks of light, pouring down from the sky like rain, are called meteors.

Some meteors make it to the surface of the Earth while some do not. Many will just burn up before reaching the ground because of frictional heating. Those that land on our planet’s surface are called meteorites.

Which is Which: Meteoroids, Meteors, and Meteorites (Plus Comets and Asteroids) 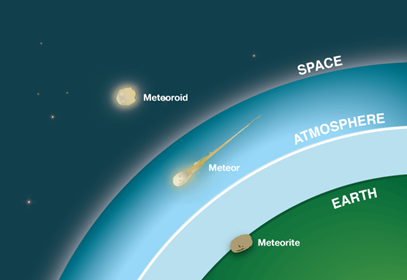 Meteoroids, meteors, and meteorites are basically the same thing. We just call them differently based on where they are. An easy way to differentiate the three is to think in terms of before, during, and after a meteor shower.

Everything starts with the meteoroids that float through space. When the Earth passes through these bodies, they pass through our planet’s atmosphere becoming bright streaks of lights that we know as meteors. When these meteors land on the ground, we call them meteorites.

Seeing that some meteorites can be as little as grains of sand, most of them will never make it to the ground. They will dissolve during their travel towards Earth.

We already learned that the “shooting stars” or meteors that we see are from dusty trails left by comets. Another body that we often get confused with comets is asteroids. As NASA put it, these objects are “leftovers” from when the solar system was formed some 4.6 billion years ago.

What sets comets and asteroids apart from each other is their composition. Comets are made up of ice, dust, and rock. When these icy comets orbit closer to the Sun, the ice melts and evaporates leaving behind trails of debris. The meteor showers that we see are from these celestial bodies.

Asteroids are made up of rocky materials. Because of that, they do not easily disintegrate like comets.

We often come across terms like radiant and zenithal hourly rate (ZHR) when talking about meteor showers. What do they mean?

The radiant is the point in our sky from which meteors appear to come from. The point of origin is also called “apparent radiant.” An easy way to identify these radiant points is through constellations.

Since the sky is divided by 88 constellations, we can readily map and locate these points. That is why we can notice that meteor showers are named after the constellations they appear to originate from. It is important to note that the radiant of a meteor shower must be above (or near) the horizon for us to see the meteor shower.

The zenithal hourly rate is simply the number of meteors an observer would see an hour during peak activity. Some of the most unforgettable showers are those that produced at least a thousand meteors an hour. We call them meteor storms or meteor outbursts. 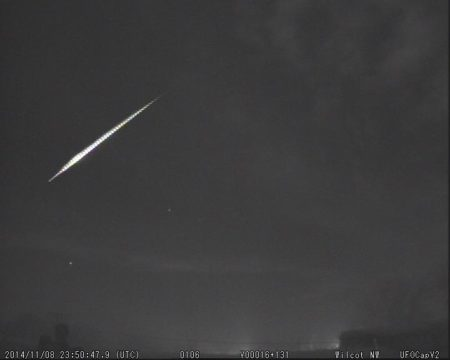 The Alpha Monocerotids (AMO) meteor shower is one of the most awaited showers in the night sky. Its radiant is located in the IAU-recognized constellation of Monoceros the Unicorn. It is considered a Class III shower or a variable meteor shower. It does not happen every year but when they do, they sometimes have very strong showers.

The zenithal hourly rate of Alpha Monocerotids is relatively low. But this shower always has something for its spectators. Being variable, it produces strong activities in rare times. It surprised everyone when it had remarkably powerful outbursts in the years 1925 and 1935. During that time, its zenithal hourly rate reached a thousand and more!

Studying the previous outbursts of 1925, 1935, and 1985, Dutch-American astronomer Peter Jenniskens was able to predict the intense shower of 1995. He announced it in the bimonthly journal WGN of the International Meteor Organization (IMO).

Jenniskens, together with the rest of the Dutch Meteor Society, witnessed the spectacle as it started with just three meteors. The display got even more exciting when it briefly went from three to about 400 meteors an hour during the peak.

The shower of 1995 helped experts discover more about the nature of Alpha Monocerotids. They found out that the outbursts were a result of dust left by an unknown comet. The half-width of the deposited comet dust is about 55,000 kilometers.

Though the exact origin of the Alpha Monocerotid meteor shower is still yet to be determined, the orbital characteristics of the stream proved helpful in giving clues about the parent body. It was found out that the dust was left by a long-period comet. How long? About half a millennium or around 500 years. The rain-like shower of Alpha Monocerotids happens when the said dust trail wanders on the path of the Earth.

It was also confirmed in the meteor shower of 1995 that the outburst of Alpha Monocerotids is very brief. People should have proper timing in seeing them as they only last less than an hour. One thing to note is that the position of the radiants of each outburst can vary every time.

Another thing that makes this shower extraordinary is the speed by which its meteors travel. While meteors can reach a maximum speed of 73 km/s, the Alpha Monocerotids travel at a speed of 65 kilometers per second. So, not only are they brief, but they are also swift!

A more recent Alpha Monocerotids meteor shower was on November 22, 2019. Many skywatchers waited for a great show that Thursday night. Peter Jenniskens, together with Esko Lyytinen of the Finnish Fireball Network, predicted the time and the brevity of this event. The estimated duration of the shower’s peak was only about 15 to 40 minutes. The projected time was 04:50 Coordinated Universal Time (UTC).

Jenniskens and Lyytinen were able to create computer models of our planet from previous storm data. The return of this shower was anticipated to be similar to the 1995 meteor storm, peaking at 400 meteors at most. Its point of origin or radiant was in the eastern part of the constellation Monoceros. This point is close to the star Procyon, the brightest star in the neighboring constellation of Canis Minor.

When To See It

We can wait for the Alpha Monocerotids meteor shower during the night of November, around the 15th to 25th day of this month. We can expect to see more of this shower on November 21 or 22 when it is at its peak. The best time to see it is during evening hours against the dark skies.

Where To See It

The Alpha Monocerotids meteor shower seems to originate from the Monoceros constellation. This unicorn-inspired pattern is located in the celestial equator. Its coordinates in the celestial coordinates are 7.15h right ascension and −5.74° declination. The shower radiant of the Alpha Monocerotids is within the boundary of this constellation. We can appreciate it more under a clear sky.