The sky is a sea of stars. Each sparkly tiny dot holds possibilities of extraterrestrial life. Who knows, right? One of the most famous sites in the subject of life outside our own is that of the Zeta Reticuli star system. Let us get to know this wide binary better, as well as the stories surrounding it. 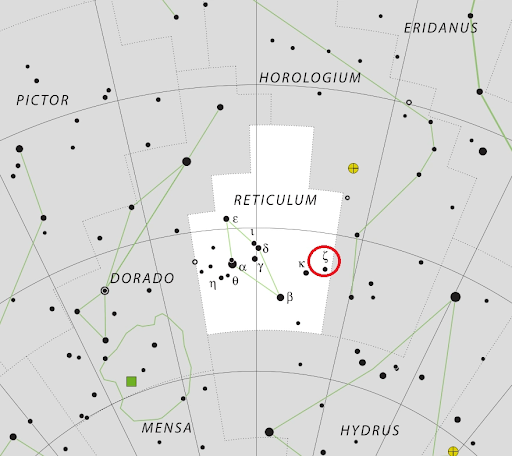 What is the Zeta Reticuli Star System?

A reticle is the pattern of lines that we can see in the eyepiece of sighting devices such as a microscope or a telescope. These crosshairs help us in focusing on the subject of our examination. The name “Reticulum” is from the Latin which means “net.”

The Zeta Reticuli star system is Latinized as ζ Reticuli. The two components are designated Zeta 1 Reticuli (ζ1 Reticuli) and Zeta 2 Reticuli (ζ2 Reticuli). They are solar analogs because both of them are G-type stars like our Sun.

Zeta Reticuli is a wide binary star system. The pair is separated at 0.06 light-years or 3,750 times the distance of the Earth to the Sun. We can see the two stars separately with our unaided eye as they shine between the 5th and 6th magnitude.

A debris disk was observed in Zeta 2 Reticuli by the Herschel Space Observatory in 2010. However, It was later found out that it was merely a matter of confusion in the background. No extrasolar planets, or planets outside the Solar System, have been found in this star system.

The pair of Zeta Reticuli gained popularity in the field of ufology when it became involved in the “Betty and Barney Hill” incident. The couple said that they were abducted by aliens or extraterrestrials from a planet orbiting Zeta Reticuli. This claim became known to many as the “Zeta Reticuli Incident” or the “Hill Abduction.”

No planet has been discovered around this system yet. Ideally, if a planet really exists in Zeta Reticuli, it should reside in the star’s habitable zone where there is water.

So where is Zeta Reticuli?

Locating this star system means finding its constellation first. The constellation Reticulum is outlined by a rhombus shape. We can easily see this pattern if we try to connect four of its brightest stars. The celestial reticle can be seen between latitudes +23° and −90°. The time to see it best is in January.

The Zeta Reticuli star system is not a part of the Reticulum constellation outline. It is, however, in its western area near the neighboring constellation of Horologium. Other nearby constellations that we can use for reference in locating Reticulum are Dorado and Hydrus.

Zeta Reticuli lies at a distance of 39.3 light-years from our planet. We can locate it using the latitude and longitude-like coordinates of the celestial sphere. Specifically, it lies at about 03h 17m 44.47 right ascension and -62° 34` 36.8 declination.

With the southern declination of Zeta Reticuli, it is not visible in some areas north of the equator including Britain. It was not included in Historia Coelestis Britannica and was not assigned a Flamsteed designation for such reason.

The system of Zeta Reticuli is composed of two main sequence stars found near the lower end of the Hertzsprung-Russell diagram. They are faintly visible to the naked eye in a background of a dark sky.

We can appreciate the pair as we can view Zeta 1 Reticuli and Zeta 2 Reticuli separately. A pair of binoculars would make our observation of the two even more captivating.

The pair belongs to the Zeta Herculis Moving Group, a set of stars that have more or less similar velocity. They are following the same direction through space, in the Milky Way, with an eccentricity of 0.24. The angular separation between Zeta 1 Reticuli and Zeta 2 Reticuli is 309.2 arc seconds or about 5.2 arc minutes.

The physical characteristics of the double star are comparable to that of the Sun. However, they have less metallicity. They also have a very long orbital period which is around 170,000 years.

Zeta 1 Reticuli and Zeta 2 Reticuli are estimated to be about 2 billion years old, based on their chromospheric properties. The luminosities of these stars are unusually high relative to their surface temperature.

Zeta 1 Reticuli is a yellow star with the stellar classification of G3−5V. It has an apparent magnitude of 5.52, bright enough to be visible to the naked eye. This G-type star is 0.985 as massive as the Sun. Its radius is 0.92 times the solar radius, and it has a luminosity of 0.761.

The presence of the element beryllium is low in this star. On the other hand, it has a higher level of activity than the other component of the star system, Zeta 2 Reticuli. It is also unsteady in terms of variability. No infrared excess was observed in this star.

Zeta 2 Reticuli is the bigger star between the two, though the difference is no that significant. It is nearly as massive as the Sun, having about 99% of the solar mass. This Sun-like star is more luminous than the other, having nearly the same luminosity as our Sun.

This star is a little brighter than Zeta 1 Reticuli, having an apparent magnitude of 5.22. It belongs in the stellar class G2V, just like our Sun. It is steady and not as erratic as Zeta 1 Reticuli in terms of stellar activities.

A hypothetical hot Jupiter was said to be detected around this star in 1996. This, however, was disproven because it was found out that the signal was from Zeta 1 Reticuli’s pulsations. If ever an Earth-like planet orbits this star, it would have about the same orbital distance from our planet to the Sun, which is about one AU.

Aside from the radiation detected at the Herschel Space Observatory in 2010, the Spitzer Space Telescope also found excess infrared radiation. The source of this radiation was allegedly a debris disk. The distance of this theoretical disk to the star Zeta 2 Reticuli is about 4.3 AU.

Recent studies in 2017 later revealed that the said disk shows no connection to Zeta Reticuli. 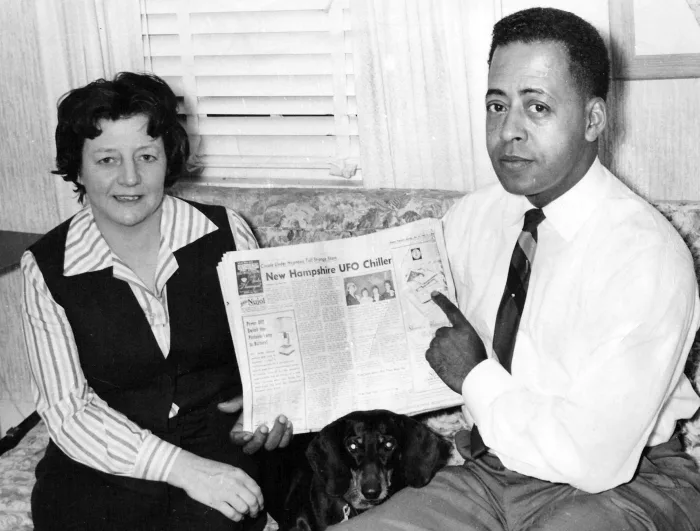 Zeta Reticuli has been famous in the field of ufology. Many believe that a planet orbiting this star system is the home of the entities that abducted Betty and Barney Hill. Their story became known as “The Zeta Reticuli Incident.” Others call this event the “Hill Abduction.”

The statements made by the couple swept public attention. And soon after experts and the media caught on their story. It was the first reported extraterrestrial encounter to become that sensational. The beings are often called the “Greys” because of their color.

The Zeta Reticuli Incident took place on the night of September 1961. Betty and Barney Hill were on their way home to Portsmouth, New Hampshire,. They were from a vacation in Canada. The White Mountain was empty except for them.

While Barney was driving, Betty saw a bright light in the sky that became brighter and brighter. Curious, she used a pair of binoculars to see it clearly. She felt that it was not something ordinary because it looks like a flying saucer that her sister previously talked about. Barney brushed it off as an airplane at first. But it was no plane because it started to descend so quickly, chasing after their car’s direction. It was following them!

At some point in their long drive, the craft hovered their car that it was all they could see. Barney likened it to a big pancake. He tried to make out what was in the unusual craft using his binoculars. He said that what he saw was nearly a dozen of humanoid figures. According to him, they all seemed to look straight at him.

The figures, with shiny “black uniforms and black caps,” moved as if getting ready to launch as the craft descended even closer to the Hills. Realizing what was happening, Barney hit the gas and drove as fast as he could. 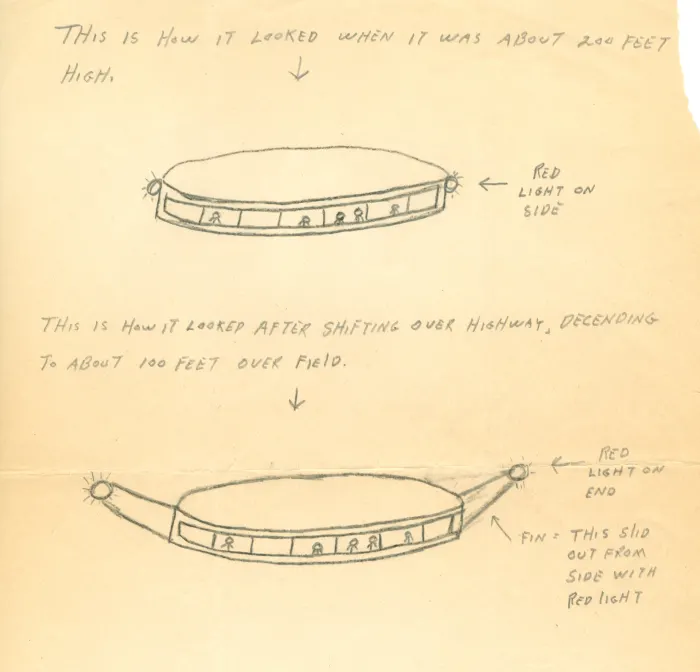 They heard an unusual buzzing that hit their car which, as a result, vibrated. They felt an odd, tingling sensation on their bodies. It left them in a state of daze and confusion for some time. According to them, they only regained consciousness after another sound of beeping and buzzing.

Betty and Barney got home at around dawn the next day. How they managed to drive all the way after losing consciousness, that they did not remember. At home, they were rather disoriented. They have noticed a lot of strange things about them. First, their watches did not work anymore. Their clothes also felt dirty.

The Hill’s memory of the event was foggy. They thought hypnosis might help them remember what happened during that night. That would also help in interpreting the dreams that Betty was having about the incident.

Betty said that she dreamed about being examined inside the alien craft. She and her husband were studied in different rooms. It is also in that dream that Betty asked where the extraterrestrial beings were from. The “leader” answered her by showing a map of stars.

The couple had separate hypnosis sessions with Benjamin Simon. It is also in those sessions that Betty tried to recall and drew the star map she saw on the ship. Betty and Barney’s statements are consistent with each other.

Experts have a different take on what happened to the couple. According to psychologist Christopher French, people interpret things according to previous beliefs and expectations. The U.S. Air Force’s Project Blue Book implied that the thing that the couple saw might be the planet Jupiter.

Others suggest that the “incident” may have been a hallucination due to stress. The Hill couple was interracial during a time when it was not common in the United States. Barney and Betty said that this was not the case. 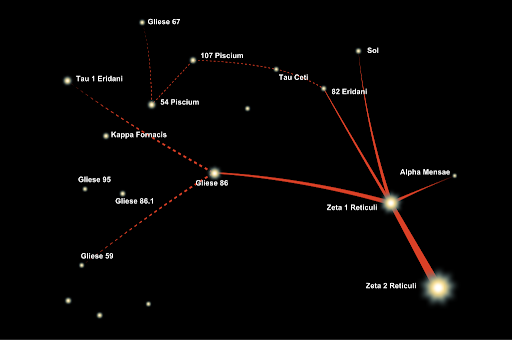 The Connection to Zeta Reticuli

The UFO encounter was connected by researchers to the Zeta Reticuli system after seeing the alien star map drawn by Betty. Below is an interpretation of the map by Marjorie Fish. It included our Sun, labeled as “Sol.” Other neighboring bright stars can also be seen on the map.

The story of the abduction of the couple became so known that books and movie adaptations were made about it. They appeared in different interviews. Their story had sparked an interest and defined the genre for themes about alien abduction.

In 1966, a book called “The Interrupted Journey” was published which was based on their story. It quickly became a bestseller. Almost 10 years later, a television program titled “The UFO Incident” was aired, bringing to television the story and biography of the couple.

Their encounter is oftentimes referred to in many science fiction television shows throughout time. It was mentioned in one of the episodes in “The X-Files.” It was also covered in History Channel in the episode titled “Abduction.”