Let’s start our exploration of the Alpha Draconis Star with a quick selection of hot facts! 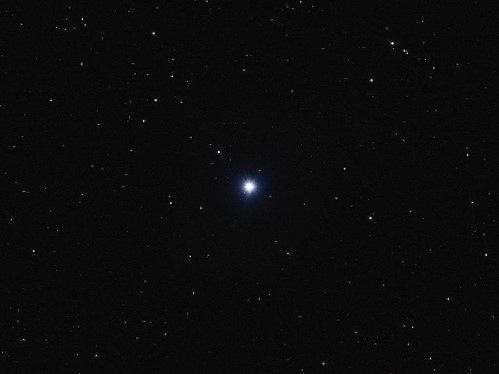 Thuban (α Dra) is one of the stars that make up the long sky pattern of the Draco constellation. This binary system gives off a white hue and it is made up of two A-type stars. It is the fourth-brightest point in its constellation.

As a single-lined spectroscopic binary, only the spectrum of the primary component has been resolved. This star has a spectral class of A0III, with the roman numeral number indicating that it is already in the giant phase. Its surface temperature reveals that it is 70% hotter than the Sun.

Meanwhile, the less massive component is thought to be of the A2 spectral type. It is believed to be in the main-sequence stage of stellar evolution.

The Span Of Thuban

The stars of the Thuban system are 61 million kilometers (38 million miles) apart from each other. This is about the same distance as Mercury is traveling around the Sun. The smaller companion orbits the primary in a 51-day period. Overall, the star system has a radial velocity of -13.0 km.

Both the component stars are nearly three times as massive as the Sun. The primary star shines with 479 solar luminosities. Meanwhile, the much fainter component is only as luminous as 40 Suns. This star system lies about 300 light-years away from the solar system.

Thuban is not exceptionally bright as it only has an apparent magnitude of 3.67. Since the limiting magnitude for naked-eye stars is in the 6th magnitude, we can see it unaided under dark skies. However, it can be hard to spot in highly urbanized areas where there is much light pollution.

The name Thuban is from the Arabic thuʿbān which means “large snake.” This traditional name was adopted by the International Astronomical Union in 2016 for this star. Aside from Thuban, this star was also called by the name Adib, which means “Dragon’s Tail.”

Thuban is part of an asterism in Chinese astronomy called the Right Wall of Purple Forbidden Enclosure.

Though not remarkable in its brightness, Thuban is best known as one of the pole stars of the north. The northern celestial pole changes and goes through a cycle known as the precession of equinoxes. As a result, the stars near the path of the changing north celestial pole become the pole star.

Because of its location near the north celestial pole, Thuban was the pole star of the north from around 3942 BCE to 1793 BCE. It was around the time when the Great Pyramid in Egypt was still being built. It was said that the pyramid was designed to align with this star.

Thuban was preceded by the variable star Tau Herculis. During its reign, Thuban’s closest position was less than 10 arcminutes from the pole. After that, it became further and was succeeded by the star Kochab.

Thuban will be a north star again in 20346 CE. At present, our immediate pole star is Polaris of the Ursa Minor constellation. This 1.98-magnitude north star lies roughly 433 light-years from us.

Thuban (Alpha Draconis) and the Great Pyramid of Giza 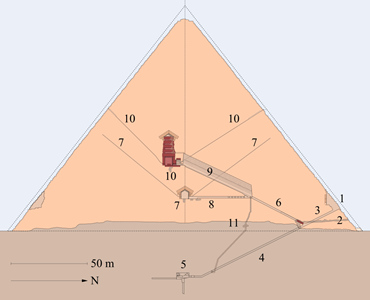 The Great Pyramid of Giza is one of the most mysterious objects on Earth. An even more intriguing feature of this architecture are the so-called “air shafts” or “star shafts.”

The use of these air shafts is not clear. Some think that these ducts were probably there for ventilation. Another theory is that they were constructed to align to certain stars that were of great importance to ancient Egyptians. So it is thought that the ducts will direct the pharaoh’s spirit to these stars.

Egyptians in the past believed that the North is the direction to heaven in their afterlife. Aside from that, they also related the stars to their deities. These stars and asterisms are: 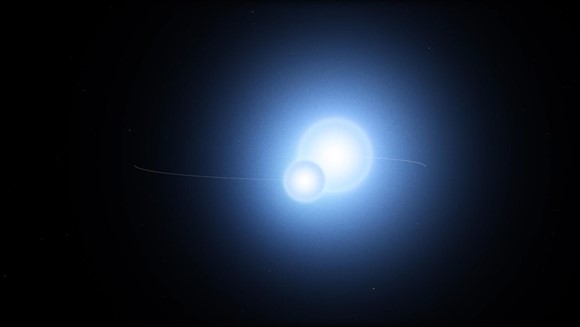 It has long been known that Thuban is a binary system. However, it was only recently that it was identified to be an eclipsing binary. The star system experiences regular mutual eclipses from its component stars. These eclipses make it a variable star.

Eclipsing binaries experience constant light with periodic drops whenever one component transits or passes in front of the other star. This occurs when the system’s orbital plane lies in the observer’s line of sight.

The eclipsing binary nature of Thuban was discovered by the Transiting Exoplanet Survey Satellite (TESS) of NASA. Another example of an eclipsing spectroscopic binary is the triple star Algol of the Perseus constellation.

Experts were amazed that the Thuban eclipse was only discovered recently. According to researcher Angela Kochoska, it must be because the eclipses of the system are rather brief. Since it lasts for only six hours, they are not easily detected by ground-based observations. 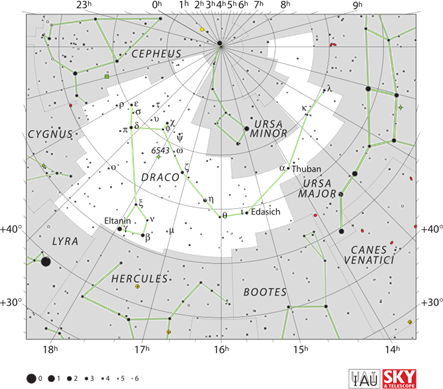 The constellation of the celestial dragon is among the largest, but its stars are not exceptionally bright. It only has three stars that are under the third magnitude.

One of the most notable deep-sky objects in the Draco Constellation is NGC 6543 or the Cat’s Eye Nebula. The galaxy cluster Abell 2218 is also in this constellation. Other famous objects are the Draco Dwarf Galaxy, a satellite of the Milky Way, and the Tadpole Galaxy—a barred spiral with a disrupted appearance.

In mythology, the Draco constellation is identified with different dragon figures. It was linked with the Gigantes. Others thought that it must be Ladon, the dragon guard in the garden of the Hesperides. Other times, it is identified with Typhon, the serpent giant son of Gaia.

Where Can You See Thuban in the Night Sky?

The star Thuban lies far north in the northern celestial hemisphere. It is part of the circumpolar constellation of Draco. It never dips below the horizon and is visible all year long. However, it might not be always visible in urban areas with high levels of light pollution.

Thuban is visible all over the northern hemisphere, from latitudes between +90 and −15°. This star is located predominantly north, with the following coordinates:

How and When to Find Thuban (Alpha Draconis)? 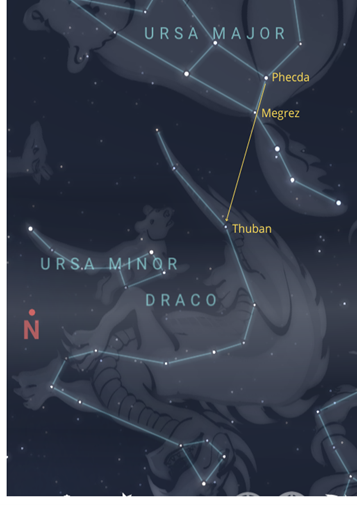 Though the constellation where Thuban belongs is circumpolar, the best time to see this star is in July. Look up at the sky on the summer nights of July at around 9 pm.

The star Thuban can be spotted in the tail part of Draco’s celestial pattern. We can locate it using the prominent Big Dipper asterism (the Plough) of the Ursa Major constellation. After finding this pattern, look for the inner stars of the bowl—Phecda and Megrez.

Drawing an imaginary line from Phecda and extending it through Megrez will point us to Thuban in the nearby constellation of Draco. 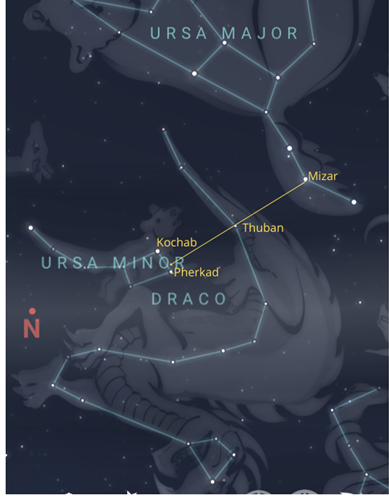 Another way to spot Thuban is through the star Mizar, the middle star in the handle of the Big Dipper. From this star, draw an imaginary line towards the bowl of the Little Dipper. This line will point to Thuban and will bring you between the stars Kochab and Pherkad of the Little Dipper.

A pole star (or polestar) is the closest bright star to the celestial pole. Because of its position, it serves as a celestial guide.

At present, we have Polaris as the pole star of the north. In the southern hemisphere, the 5.5-magnitude star Polaris Australis or Sigma Octantis is the pole star. The south pole star, however, is not as prominent as the northern star because it is hardly visible to the naked eye.

The pole stars are not fixed, but rather transitory. Polaris and Polaris Australis will not remain as the pole star forever because of what is called the precession of the equinoxes.

The precession of the equinoxes is the slow change in the orientation of the Earth’s rotational axis. The Earth moves like a spinning top. It wobbles as it moves through its axis. And because of that, the celestial poles will not be pointing at the same areas in the sky.

The Earth’s axial precession is a cycle that takes 26,000 years. Different stars will take the title of the North Star during this cycle. These stars are from the constellations that surround the ecliptic north pole. 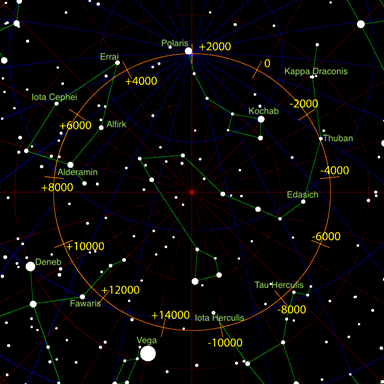 A star needs to meet some requirements for it to be considered a pole star. The first is that it should be brighter than the 6th magnitude. As a naked-eye star, it will be useful as an indicator of the north from an observer from Earth. Also, it must be located within 5° from the celestial pole.

During the cycle, there will be times when the closest bright star lies more than 5° from the pole. In this period, the star is considered more of an “approximate guide” or “near-north/south” rather than a definite pole star.

After Polaris, the pole will drift to the constellation of Cepheus. Several stars in this large constellation will become the North Star over the precession period. Based on the table above, the star Vega is the brightest of the pole stars.

The stars Alfirk and Iota Cephei share timing so either of them (not both) will become the pole star. Kappa Draconis and Kochab also share timing.

Interestingly, the other planets in the solar system have their own pole stars as well. Each planet has a different orientation in space so each pole point to different stars. 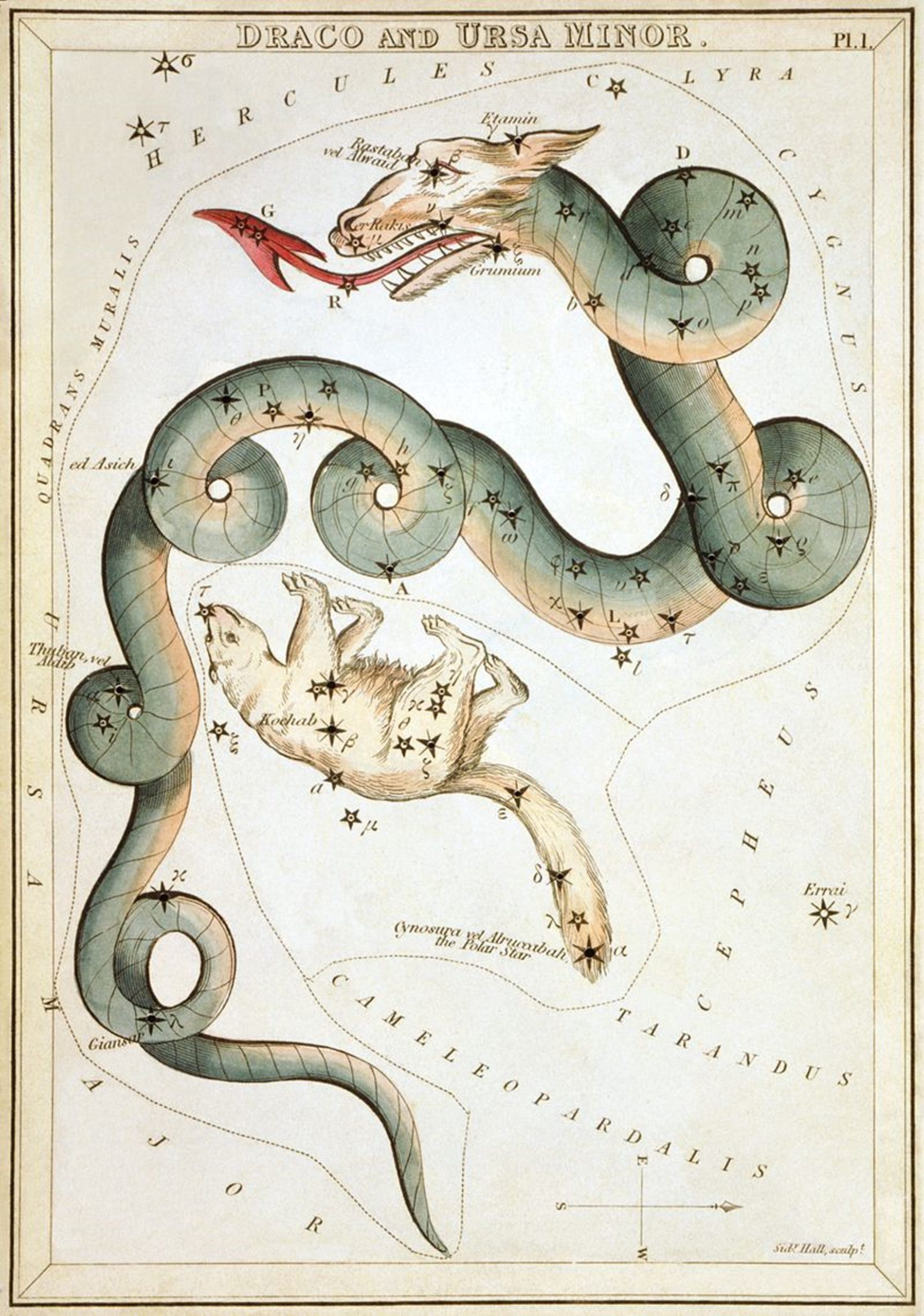 The celestial dragon is mostly associated with Ladon, the dragon in one of the 12 labors of Heracles. One of Heracles’s tasks was to pick golden apples from the garden of the Hesperides, the daughters of Atlas. This was no ordinary tree as it was Hera’s gift to Zeus. Also, it was guarded by the dragon Ladon.

Through the help of Prometheus, Heracles found a way to get the apples. Knowing that Atlas was tired of holding up the world on his shoulders, the hero offered to hold the world in exchange for him getting the apples from his daughter’s garden.

After returning from the garden, Heracles tricked Atlas into carrying the world again and he succeeded in bringing back the apples to Eurystheus.

How and When to Find Thuban?: https://stellarium-web.org/