Tau Ceti is a 3.5 magnitude star from the constellation of Cetus the Sea Monster. It is relatively close to us, lying at only about 12 light-years away. Let’s take a look at some more Tau Ceti Star facts before diving into the detail! 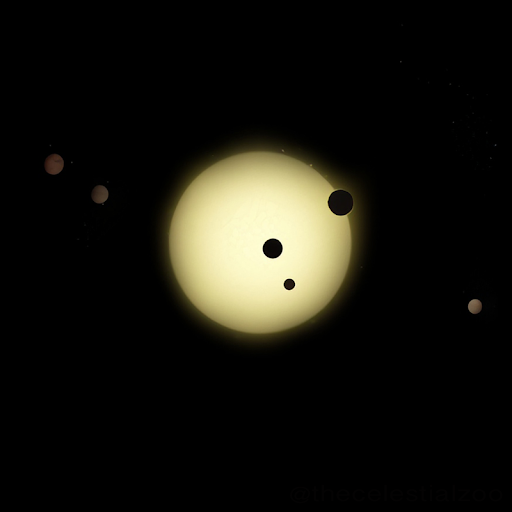 Tau Ceti is a G-type star located about 12 light-years away in the constellation of Cetus.
With an apparent magnitude of 3.5, Tau Ceti is one of the stars we can see with the naked eye. Its spectral type, G8V, indicates that it is still in the main-sequence like our Sun.

The yellow-hued Tau Ceti is not the brightest star in the constellation—this title belongs to Beta Ceti or Diphda. However, because of its Sun-like characteristics and relatively close distance to us, Tau Ceti has become one of the most important stars in the solar neighborhood. It is also a famous subject in science fiction.

While the Sun rotates every 27 days, Tau Ceti is a bit slower, taking 7 days more to complete one rotation period. Though we are not yet sure why this is so, some astronomers believe that it could be because we are looking at the star’s pole from Earth.

Other Features of Tau Ceti

In 2017, four rocky worlds that are classified as Super-Earths were detected orbiting Tau Ceti. These terrestrial worlds are not only similar in composition to Earth. Two of them are in the habitable zone—the area where liquid water can exist on their surface. A paper in Astronomy & Astrophysics also suggested the presence of a Super-Jupiter around this star.

Aside from the planets, a large disk was discovered earlier surrounding the star. We can compare this to the asteroid belt and the Kuiper belt in the solar system. This structure, however, has 10 times more material.

The chance of these objects colliding is high. These events will send the asteroidal and cometary material from the disk into the planets, making life even more challenging on these worlds.

Learning about the star systems near the Sun will always be an exciting affair. What makes them even more compelling is the possibility of extrasolar worlds like our own that orbit these stars.

The closest star to us, the red dwarf Proxima Centauri of the Alpha Centauri system, has an Earth-like planet only 4.37 light-years away. Another nearby star, TRAPPIST-1, has not only 1 but 7 rocky planets. The closest Sun-like star to us, Tau Ceti, adds to the list as rocky planets were discovered in the system.

The Tau Ceti system has four Earth-like objects discovered in 2017. These outer worlds were detected using Radial Velocity or Doppler spectroscopy. In this method, astronomers observe the changes or “wobbles” in the star’s spectrum.

Researchers and authors from the University of Hertfordshire, UK, shared that they “have introduced new methods to remove the noise in the data in order to reveal the weak planetary signals.”

The inner two planets, designated Tau Ceti g and h, are very close to the star. In fact, they are closer to Tau Ceti than Mercury is to the Sun. This extremely close distance to the star makes habitability unlikely possible to these exoplanets.

Also, with the smallest being about 1.7 times the Earth’s mass, these are some of the smallest exoplanets known surrounding a solar-like star.

Planets In The Habitable Zone

Tau Ceti e and f are considered Super-Earths, planets with more mass than Earth but lighter than Neptune and Uranus. They were discovered using data from High-Resolution Echelle Spectrometer (HIRES) of the W. M. Keck Observatory, Anglo Australian Planet Search or (AAPS), and the High Accuracy Radial Velocity Planet Searcher (HARPS) in Chile.

Below are the exoplanets that orbit Tau Ceti, with their hypothetical visualization from NASA’s exoplanet catalog. This planetary system is located 12 light-years from Earth. 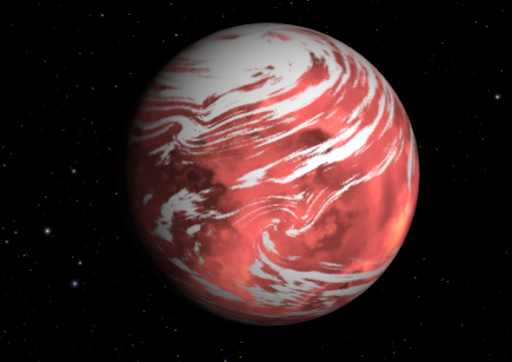 Tau Ceti g is believed to be a rocky world surrounding Tau Ceti. It is identified as a Super-Earth and is 1.75 times more massive than Earth. Since it lies only 0.13 AU from the star, this only takes 20 days to complete one revolution. It is the nearest of the four confirmed planets surrounding the G-type star. 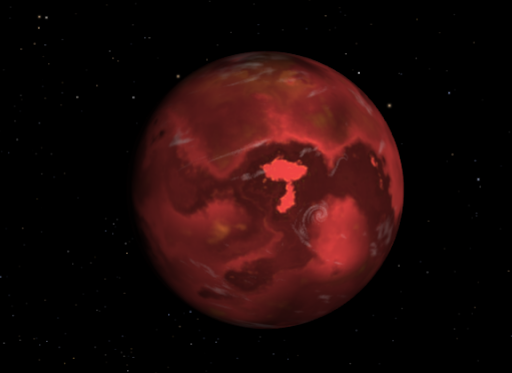 Tau Ceti h is 83% more massive than Earth and 1.19 times larger. This Super-Earth is 0.24 AU from the yellow-hued Tau Ceti. At this distance, it is closer to its star than Mercury is to the Sun, which is 0.387 AU away. This rocky world takes nearly 50 days to complete an orbit around its host star. 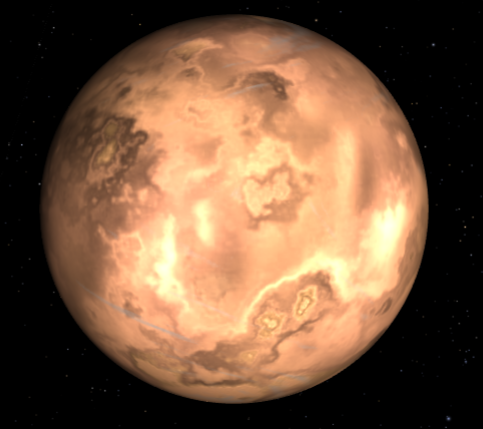 Tau Ceti e is a larger planetary companion of the Sun-like star Tau Ceti. At 0.54 AU from its host, it lies in the habitable zone or Goldilocks Zone of its planetary system. If it were in the solar system, it would be located between the orbits of Mercury and Venus.

This exoplanet is 3.93 times as massive as Earth, though it has a shorter orbital period which is only 163 days. 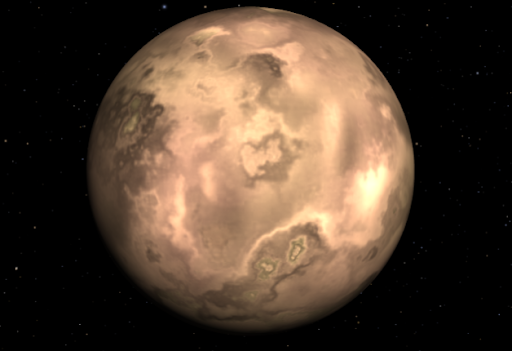 Tau Ceti f is a potentially rocky planet that orbits the nearest Sun-like star to us. It lies in the habitable zone and is 1.33 AU away from the star. Tau Ceti f is nearly 4 times as massive as Earth and is 1.81 times as large. This exoplanet takes 1.7 Earth years to complete a trip around its star. 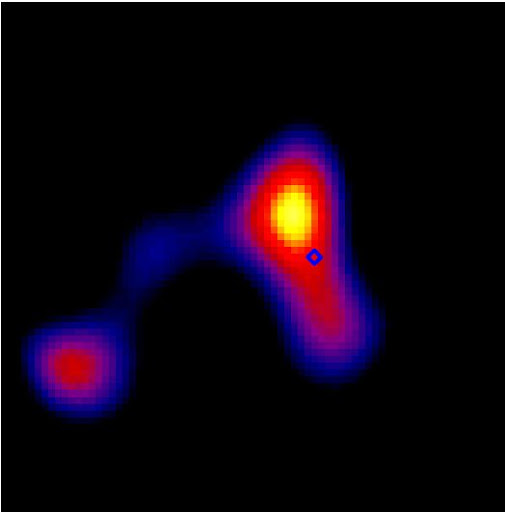 The disk surrounding the star Tau Ceti was discovered in 2004 through the James Clerk Maxwell Telescope in Hawaii. The said disk is estimated to extend from around 10 AU to 55 AU from the host star. It is said to be comparable to the size and shape of the solar system’s Kuiper Belt.

Though they are about similar, the cold Tau Ceti disk is more massive than the debris disk surrounding the Sun.

Objects around 10 km (6.2 miles) in this extrasolar disk can be about as massive as Earth. In comparison, solar system bodies of the same size are only as massive as 0.1 Earths. The reason behind the great mass difference between these star disks remains a mystery.

Most of the time, the debris surrounding a star are remnants or leftovers of this star’s formation.

An example of this is the wide interstellar disk of the ~500 million-year-old Epsilon Eridani. However, Tau Ceti is about a billion years older than the Sun. Since it is not a young star, the debris surrounding it might have originated from larger asteroid and comet collisions.

The presence of the Tau Ceti disk poses a challenge for life on the star’s planets because of frequent bombardment. On Earth, for example, a big impact event brought about the extinction of dinosaurs. The effect of these events on Tau Ceti planets will be more destructive since the objects of its disk are much more massive.

Constant impact events will likely wipe out existing life that may have formed on these exoplanets. Still, this does not completely rule out the possibility of life in the Tau Ceti planetary system. 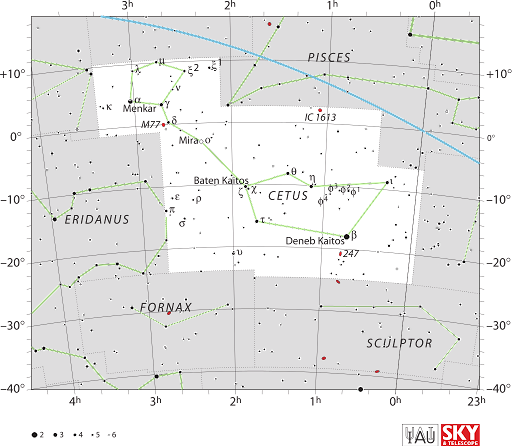 The Cetus constellation occupies a very large region of the sky. With a coverage area of 1,231 square degrees, it is the 4th largest constellation out of the 88 modern constellations of our night sky.

Cetus is the Sea Monster of our sky but it is also often called the “Whale.” It is an equatorial constellation because it intersects the celestial equator. Because of its large area, it is visible from most places on Earth. It can be observed between latitudes 70° in the northern hemisphere and up to 90° in the southern hemisphere.

The brightest point in Cetus is the red giant star Mira or Omicron Ceti. As the first variable star discovered, it became a prototype of all other stars with similar characteristics. Stars of this type are called Mira variables. Tau Ceti is another notable star in the constellation.

The brightest star in Cetus is the 2.0 magnitude Diphda or Beta Ceti. It is followed by the second brightest member, Menkar or Alpha Ceti.

Galaxies and other deep-sky objects are abundant in the Cetus constellation because it is not shrouded by dust from the Milky Way galaxy. Examples are the spiral galaxy Messier 77, the Cetus Ring, JKCS 041 (the most distant galactic cluster), and IC 1613.

Where To See the Tau Ceti Star? 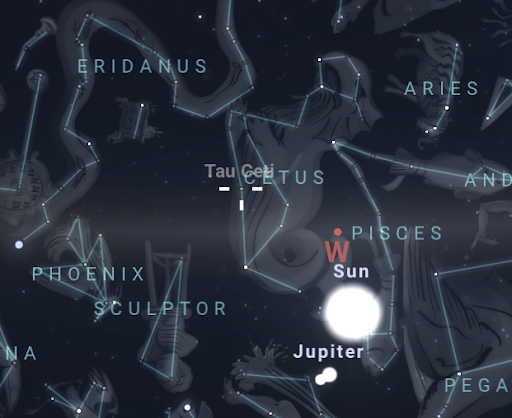 This constellation lies on the celestial equator. It is not located along the ecliptic, but it is near the zodiac constellations of Taurus, Aries, Pisces, and Aquarius. If we can locate these more famous constellations, it is easier to find the star Tau Ceti.

Also, Cetus the Sea Monster lies near other constellations of the water element. It is bordered by its neighboring constellations: Aries, Pisces, Aquarius, Sculptor, Fornax, Eridanus, and Taurus.

How and When To Find It?

From the northern hemisphere, Tau Ceti is best visible from around late fall to early winter. Specifically, the best month to spot it is in November. This time, it is spring to summer in the southern hemisphere.

In the Cetus sky pattern, this Tau Ceti can be seen nearby Diphda, the brightest star in the constellation, which marks the tail of Cetus. 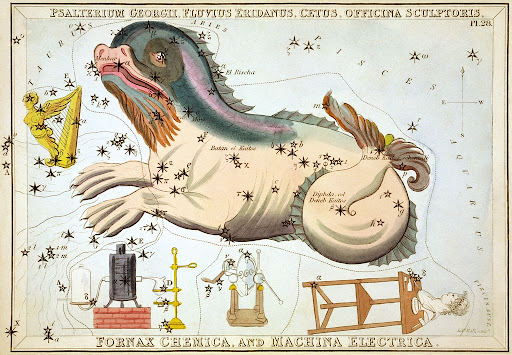 The star Tau Ceti does not have any myth associated with it. However, the constellation Cetus, which has been known for a long time, is known as the Sea Monster in Greek mythology.

According to stories, the vain Queen Cassiopeia claimed that she was more beautiful than the sea nymphs. Poseidon and the nymphs were furious upon hearing this.

The god of the sea sent the sea monster Cetus to destroy the kingdom of King Cepheus and Queen Cassiopeia. The king feared for his kingdom and asked for help from the oracle.

They later learned that the only way to stop the sea monster is to offer their daughter, Princess Andromeda.

Andromeda ended up being chained to a rock, awaiting the wrath of Cetus. Luckily, the hero Perseus came just in time to slay the sea monster and save the princess.

Where To See the Tau Ceti Star?: https://stellarium-web.org/