Interesting Facts About the Star Procyon 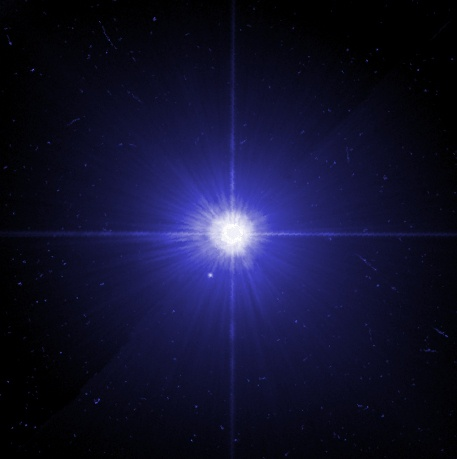 Procyon is the brightest point in the small constellation of Canis Minor. In fact, it is the only first-magnitude star in this faint constellation. Observations of this star in the past helped in discovering proper motion, which means that stars move and are not fixed in the sky.

Procyon AB is made up of an F-type star and a white dwarf star. The main component, Procyon A, is already in the late stage of the main-sequence phase. It is likely that this star has nearly converted all its hydrogen in the core into helium and is now transitioning into a subgiant. The companion star in the system is a white dwarf just like Sirius B. Procyon B, however, is much less massive and less luminous.

Procyon A and B orbit each other around a common barycenter with an orbital period of 40.84 years. Their orbit has an eccentricity greater than that of Mercury, and the two have an average separation of 15 AU. In the solar system, this is around the distance between the orbits of Saturn (9.5 AU) and Uranus (19.8 AU) from the Sun.

Procyon is one of our closest stellar neighbors. It lies only 11.46 light-years from us as determined by the Hipparcos satellite of the European Space Agency (ESA).

Procyon looks prominent as seen from Earth because it is relatively close to us. However, the second-brightest star in the constellation, Gomeisa, is much brighter. While Procyon A has about seven solar luminosities, Gomeisa shines with the luminosity of 250 Suns!

Procyon can be observed as a white star with a faint yellow tinge. It is one of the easiest stars to identify with the unaided eye. Because of this, it is one of the 58 stars that are considered important in celestial navigation. 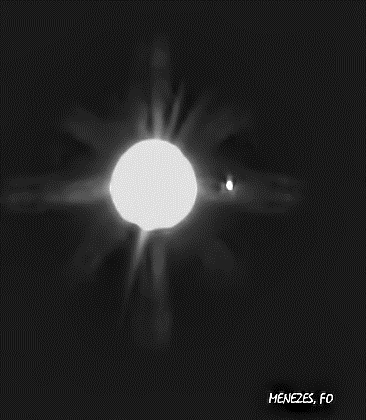 Procyon A is a naked-eye star with a visual magnitude of 0.34 and a spectral type of F5IV–V. The “IV–V” luminosity class indicates that this main-sequence star is on its way to evolving into a subgiant star.

Procyon A has 1.50 times the Sun’s mass but it is twice as large. Main-sequence stars with less than eight times the solar mass will evolve into red giants in the later stage of their life, the Sun included. By this time, Procyon A would expand to about 80–150 times its diameter now.

The effective temperature of this star is estimated to be around 6,530 K. To compare, the Sun’s temperature is around 5,778 K. Procyon A is more luminous than the Sun too because it is larger. It shines with the luminosity of about seven Suns combined.

Procyon B is the white dwarf companion in the Procyon star system.

To review, a white dwarf is a remnant of a dying star with an average mass like the Sun. At the endpoint of their lives, stars like this swell and expel their other layers which creates a beautiful planetary nebula. When the outer layer is expelled, what remains is a white dwarf—a very hot and dense core of the former star.

This white dwarf star only has 0.6 times the solar mass and 0.01 of the Sun’s radius. Because it is a relatively small object, it also has very low luminosity (0.00049 Suns).

The parent star of Procyon B was likely about three times as massive as the Sun. This progenitor star came at the end of its stellar life around 1.19 billion years ago.

As a white-hot core of a dying star, Procyon B has a surface temperature of 7,740 K which is hotter than Procyon A. However, it is no longer generating energy and is only shining through residual heat. It will continue to cool over time until it no longer emits heat or light. By this time, it will become a black dwarf.

White dwarfs take a very long time to cool off. In fact, no white dwarf has completely cooled yet, so black dwarfs are still considered “theoretical.”

Canis Minor is almost always associated with Canis Major, the Greater Dog. These two dog constellations have been long recognized together by ancient Babylonians and Egyptians.

The name Procyon is from the Greek word Prokyon which means “before the dog.” This is what the ancient Greeks used to describe this star as it rises above the horizon into the sky before Sirius the Dog Star does.

Procyon is called Nangar in Babylonian mythology. The Chinese name of this star is Nán Hé sān which means “the Third Star of South River.” South River itself is a Chines asterism that Procyon forms with Gomeisa and Epsilon Canis Minoris. In Greek mythology, this star is associated with the hound Maera. 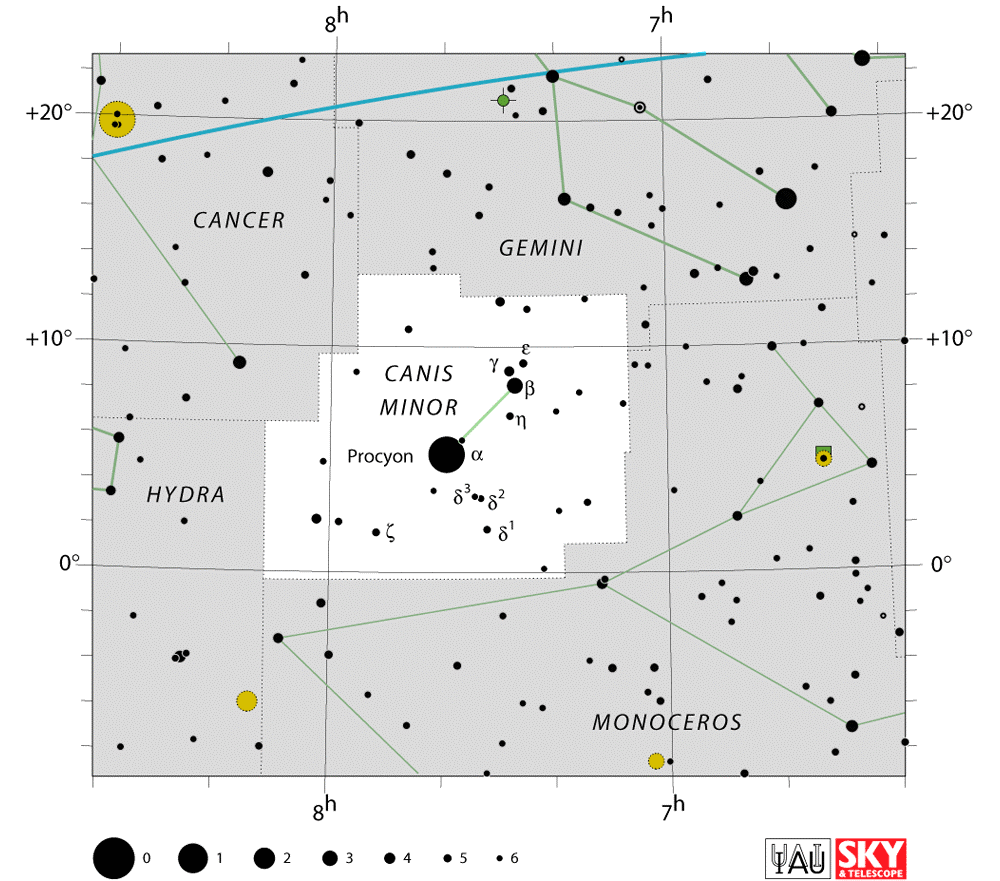 Canis Minor is a small constellation with an area of only 183 square degrees. In terms of size, it ranks 71st among the 88 modern constellations of today. It is called the “lesser dog” in comparison to the bigger constellation of Canis Major, the “greater dog.”

The first-magnitude star, Procyon, is followed by the variable star Gomeisa which has an apparent magnitude of 2.84–2.92. Another notable star in the constellation is the red dwarf called Luyten’s Star. This red dwarf has an apparent magnitude of 9.87 and is located close to us at only 12.36 light-years. Some of the stars in the constellation have planets too!

Canis Minor has a few notable deep-sky objects. A great example is the planetary nebula Abell 24. The lenticular galaxy NGC 2508 and the interacting galaxies of NGC 2402 are in this constellation too. The 11 Canis-Minorids meteor shower seems to radiate in the sky region of Canis Minor.

The Lesser Dog was associated by ancient Egyptians with their god Anubis. The constellations of Canis Minor, Orion, and Gemini were important to the Aztecs because they formed an asterism which they called “Water.” It is said that the stars of these constellations guided the Aztecs on whether it was time to plant or harvest their crops.

One day, the dog Laelaps, which always catches everything it hunts, was sent to get the fox. This resulted in a never-ending chase between the two! Ultimately, Zeus intervened and put them in the sky. The Teumessian Fox became Canis Minor and Laelaps became Canis Major.

In another story, it is said that Canis Minor is one of the two hunting dogs of Orion the Hunter. 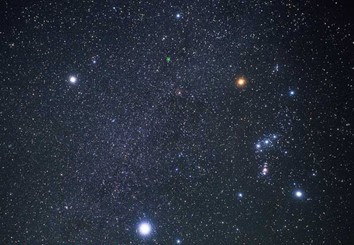 Aside from constellations, asterisms are other sky patterns that make our night sky more exciting. A great example of this is the Winter Triangle.

The Winter Triangle is a favorite asterism of the northern winter sky. It is formed by three of the brightest stars in the sky: Sirius, Betelgeuse, and Procyon. 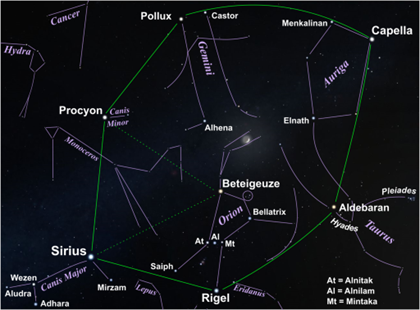 The Winter Hexagon is also called the Winter Oval. It is made up of very bright stars and has the smaller Winter Triangle inside it. Two stars of the Winter Triangle, Procyon, and Sirius are also vertices of this larger asterism.

The stars that make up the Winter Hexagon are:

Where Can You See The Procyon Stars in the Night Sky? 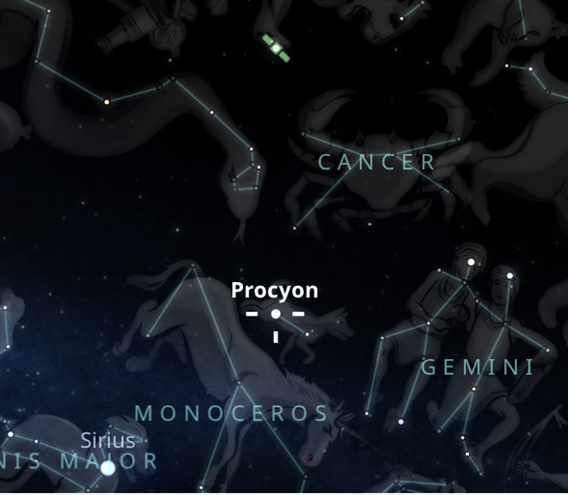 Neighboring stars and constellations are also helpful in locating Procyon in the sky. The small constellation of Canis Major is surrounded by larger and more prominent constellations:

How and When to Find Procyon Star? 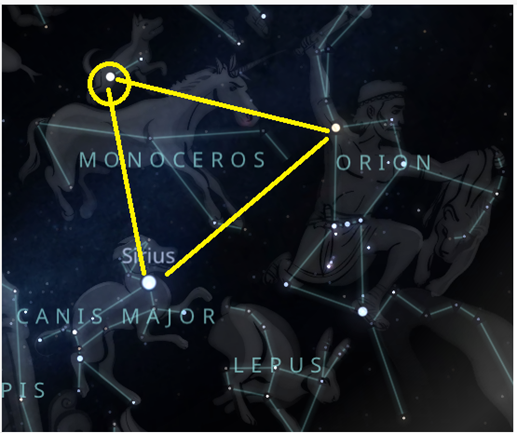 Procyon is prominent during the winter months of December, January, and February in the northern hemisphere.

While it is cold north of the equator, the southern hemisphere is experiencing summer in the same months. The star is at its highest point in the sky at around 9m pm and is best seen around late winter.

There are many ways to spot Procyon in the night sky. The easiest one is to use the Winter Triangle and the very bright stars nearby. The easiest one to find is Sirius, the brightest star in the sky. Betelgeuse is another easy object to spot because of its unmistakable reddish hue. After all, it is part of the conspicuous constellation of Orion.

Procyon is located left of the red supergiant Betelgeuse. You can draw an imaginary line to connect these three stars, forming the equilateral triangle that is the Winter Triangle. 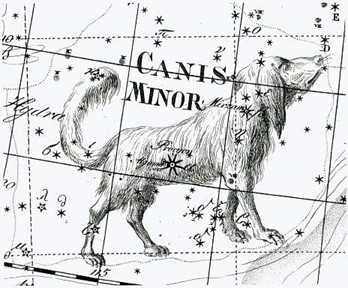 The star Procyon is said to be Erigone’s dog named Maera.

Erigone’s father is Icarius. He was a follower of Dionysus so he was known for his great ability in winemaking. During one of his travels, Icarius offered his wine to some shepherds. Unluckily, the shepherds died so their other companions attacked and killed Icarius.

Back home, Erigone became worried about her father. She decided to look for him together with her dog Maera. Because of its strong senses, the dog was able to track Icarius’s grave under a tree.

Erigone became so heartbroken with what happened to her father. She was so depressed that she decided to end her life, and Maera jumped off a cliff too.

The god Dionysus saw what happened and felt sorry for the family. He was furious and brought plagues to Athens. The calamities only ended when the people offered rites for Icarius and Erigone.

Dionysus rewarded Erigone, Icarius, and Maera by putting them in the sky. Erigone became the Virgo constellation while Icarius became the constellation of Boötes. The hound, Maera, became the brightest star in Canis Minor, Procyon. The dog was placed near the celestial river (the Milky Way) so he would never get thirsty.

Where Can You See Procyon in the Night Sky?: https://stellarium-web.org/

How and When to Find Procyon?:
https://stellarium-web.org/