Fomalhaut means “mouth of the fish.” It is the brightest star in the Piscis Austrinus constellation which is also known as the “Southern Fish.” Let’s check out some more facts on the Fomalhaut Star, before we dive into the detail! 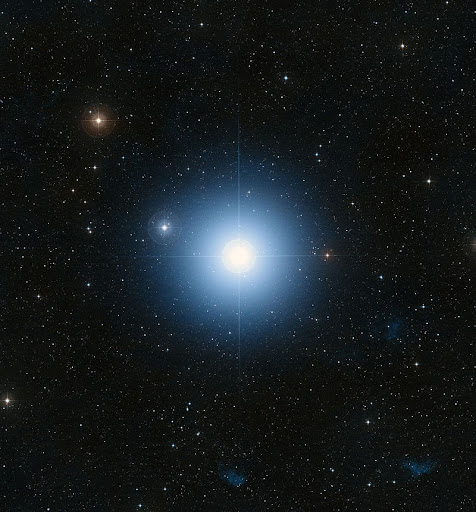 Fomalhaut is a main-sequence white star. It is the brightest star in the Piscis Austrinus constellation. The name of the constellation is Latin which means the “Southern Fish.” This differentiates it from the zodiac constellation of Pisces.

The name Fomalhaut was derived from the Arabic Fum al Hut which means “mouth of the fish.” This is a description of its position in the constellation pattern as seen in the night sky. Fomalhaut, Aldebaran, Antares, and Regulus are called the Royal Stars in Persian culture.

Easily Visible To The Naked Eye

Fomalhaut is located 25 light-years from us. It has an apparent magnitude of 1.16 as seen from Earth, so it is easily visible to the naked eye. It is a main-sequence star like the Sun but it burns around 16 times brighter. Because of that, it will use up its fuel faster. While the Sun will spend 10 billion years in the main sequence, Fomalhaut will only have around 1 billion years.

Fomalhaut forms a triple star system with Fomalhaut B (TW Piscis Austrini) and Fomalhaut C (LP 876-10). The star Fomalhaut C is located very far from the other two. In fact, it is already a part of the Aquarius constellation.

Excess infrared radiation has been detected on Fomalhaut which indicates that a debris disk may be surrounding it, like the star Vega. It was thought to have a planetary companion which was called Fomalhaut b. However, new findings indicate that it is more likely a dust cloud that is part of the disk and not an exoplanet. 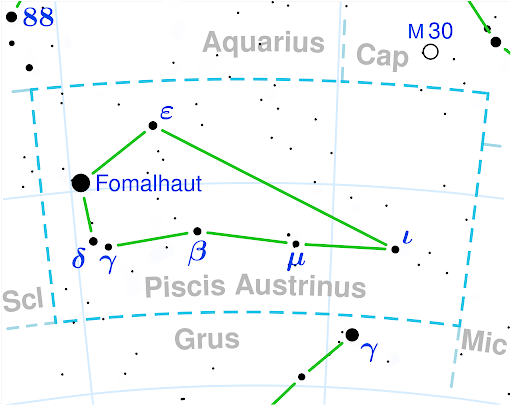 The constellation of Piscis Austrinus is located in the southern sky. It was one of the first 48 constellations that were recognized by Ptolemy in the second century. Its name means “the southern fish.” When it was cataloged in the Almagest, Ptolemy called it Ichthus Notios.

Piscis Austrinus is not an exceptionally bright constellation. In fact, only its brightest star, Fomalhaut, is brighter than the fourth magnitude. The constellation is enclosed in a four-sided polygon assigned in 1930 by Eugène Delporte.

The Grus constellation, also known as “the crane,” was part of Piscis Austrinus before. In the late 1500s, astronomer Petrus Plancius carved it from the stars that were once part of the southern fish.

After Fomalhaut, the second brightest star of Piscis Austrinus is the B-type star Epsilon Piscis Austrini. Exoplanets were also discovered in the constellation. The latest is the addition of two super-Earths in 2020. There are also deep sky objects such as the spiral galaxies NGC 7259 and NGC 7314.

Where Can You See Fomalhaut in the Night Sky?

Fomalhaut is often called the “Loneliest Star” because it lies in the area of the sky where not many bright stars can be seen. Below are the coordinates of this star:

The first thing we need to do to find Fomalhaut is to find its constellation. We can use the neighboring constellations that surround Piscis Austrinus.

We can easily identify the location of Fomalhaut once we find the Piscis Austrinus. This constellation forms a fish pattern and this bright star marks the mouth of the southern fish.

How and When To Find It?

The best time to see Fomalhaut depends on your location as an observer. In the Northern Hemisphere, it is seen best in autumn. That is why it got the nickname “the Autumn Star.”

Fomalhaut rises above the horizon from around September to December, making it finely visible from the continental United States. Though Fomalhaut is mostly alone in the sky, we can sometimes see it with other bright objects like Saturn and Jupiter. 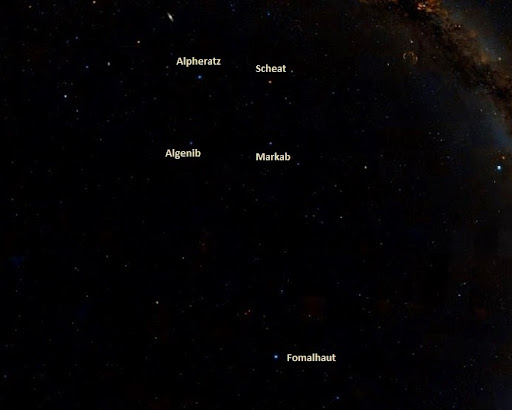 From the northern latitudes, another technique we can use to find Fomalhaut is through the Great Square of Pegasus. This asterism is one of the most famous sky patterns of the northern sky in autumn.

It is part of the constellation of Pegasus (the Flying Horse) and is made up of the stars Algenib (Gamma Pegasi), Alpheratz (Alpha Andromedae), Markab (Alpha Pegasi), and Scheat (Beta Pegasi).

From this square, imagine a straight line connecting the two stars on the right-hand side (western portion) of the asterism. From the stars Scheat and Markab, extend this line about 3.5 times southward. This line will pass through the constellations of Aquarius and Pisces, which are not exceptionally bright.

You will know that you have found Fomalhaut since it is the only bright star in this region of the sky. If you have a good telescope, you can also explore the whole star system and find Fomalhaut B and Fomalhaut C. But remember, Fomalhaut C is already part of the Aquarius constellation.

Fomalhaut forms a triple star system with the stars TW Piscis Austrini and LP 876-10. These three stars are also known as Fomalhaut A, B, and C, respectively. It is considered the widest-spanning star system because of the great distance among the three stars.

TW Piscis Austrini or Fomalhaut B is the second star that forms the multiple star system of Fomalhaut. It is a K-type variable star with an apparent magnitude that ranges around 6.44–6.51.

Fomalhaut B is located around a light-year away from Fomalhaut A. With that distance, they are seen as visually separated stars from Earth. Fomalhaut B is smaller and less massive than the primary star, with only 0.7 times the Sun’s mass and 0.6 times its radius. It is also less luminous.

Fomalhaut C has a very wide visual separation from the other stars in the system. This red dwarf star lies 2.5 light-year away from Fomalhaut A and even further at 3.2 light-years from Fomalhaut B. It lies in the constellation of Aquarius.

This star was originally cataloged as LP 876-10 but in 2013 it was discovered that it shares common orbital properties with Fomalhaut A and B in constellation Piscis Austrinus. After that, it was given the designation Fomalhaut C.

Fomalhaut C is the smallest star of the three. It only has 0.2 times the Sun’s mass and an apparent magnitude of 12.6. We cannot see it with the naked eye so a telescope is needed to spot it.

Like Fomalhaut A, a disk was also found surrounding this star using the Herschel Space Telescope. This belt is thought to be home of solar system-like comets and asteroids. This star has an orbital period of about 20 million years around Fomalhaut A.

Fomalhaut does not only have one but several disks. The disk closest to the star is made up fine particles and the debris seems to grow larger going outward. The innermost disk lies close at around 0.1 AU from the star. After it is a larger disk around 0.4-1 AU from the hot blue star. The outermost disk has a torus shape and is 133 AU from the star.

Dagon (Fomalhaut b) : The Disappearing Exoplanet 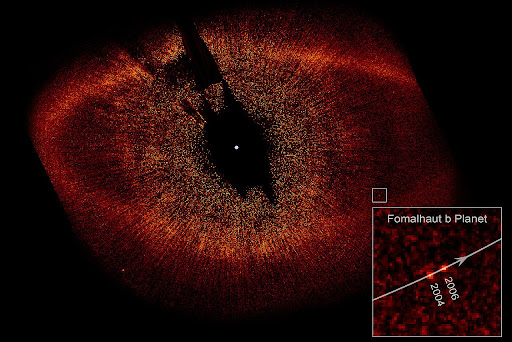 In 2008, the Hubble Space Telescope spotted an exoplanet surrounding the blue white star Fomalhaut. It was a remarkable event because that was the first time that an exoplanet was discovered through direct imaging. Its existence was confirmed in 2012.

The exoplanet was designated Fomalhaut b. In 2015, it was given the official name Dagon, which has a Semitic origin. Dagon was thought to be a gas planet, about 2 to 3 times the mass of Jupiter, or comparable to Neptune’s mass.

Years later, astronomer András Gáspár was going through Hubble images from 2014 when he noticed that Dagon was nowhere to be seen. Gáspár and George Rieke, another astronomer from the University of Arizona, reviewed the data and found out that it has indeed vanished. The images revealed that the exoplanet had faded away over time.

The most probable explanation for this is that Dagon was not really a planet. According to astronomers, it must be a debris cloud from two objects that may have collided. These objects are estimated to be around 200 kilometers or 125 miles wide, with a composition similar to that of comets.

Another thing to consider is that Dagon did not emit infrared radiation. Infrared radiation is expected among young planets but none was detected from it. In contrast, the orbit-crossing characteristic of this object is consistent with being a planet.

Still, the nature of Fomalhaut b remains a big mystery. However, it is most likely that there was never a planetary system in the first place. 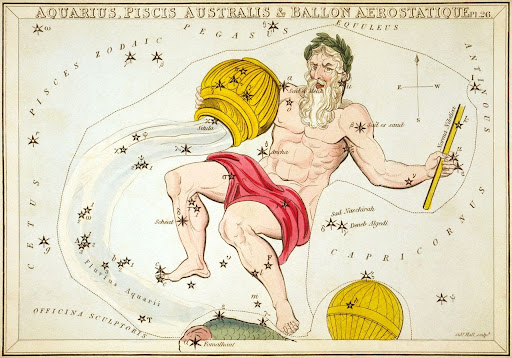 Fomalhaut was considered a Royal Star in Persian culture. Together with it are Aldebaran (Taurus), Antares (Scorpius), and Regulus (Leo). These are the most important stars for the Persian Empire as they are thought to be the guardians that govern the sky.

Except Fomalhaut, the three stars are from the zodiac constellations. They lie near the ecliptic or the apparent path of the Sun. Fomalhaut was choosen as the fourth Royal Star because of the bright star Fomalhaut. The Capricornus constellation has no bright star so the Persians chose one from constellation Piscis Austrinus. This dark area in the sky is called the “ceslestial sea.”

It was believed that the sky was divided into four and that the Royal Stars were the guardians of each district. Each of them are the brightest in their constellations. They were highly regarded by the people that used them for guidance. Persians believed that major world events were largely connected to them.

They were used for navigation and understanding sky phenomena, among others. Also, as they were thought to posses good and evil, people used to look upon these stars for predictions. It was believed that good things will happen if these stars are positively aligned. When it is the other way around, this meant disasters and bad events.

The constellation of Piscis Austrinus where Fomalhaut belongs has several mythological stories across cultures. In Egypt, it was said that the major goddess Isis placed it in the sky as a reward for saving her life.

In Greek mythology, this constellation is known as Great Fish and that the two fish of Pisces came from it. According to another story, this fish earned its place in the night sky after saving Aphrodite’s daughter.