Interesting Facts About the Star Altair

Altair (α Aql) is the brightest point in the large constellation of Aquila. This star is sometimes nicknamed “the eagle’s eye” because of its position in the sky pattern of the celestial eagle. Depending on other star catalogues, it is also designated 53 Aquilae and HIP 97649.

With an apparent magnitude of 0.76, Altair is known as the twelfth brightest star in our night sky. It has the spectral type A7V and shines with a white color that we can easily see with the naked eye.

The “V” designation in the spectral class of Altair indicates that it is a main-sequence star like the Sun. That means it burns hydrogen in its core to generate energy. It is 1.83 times as massive as the Sun with 1.79 times the solar radius.

Though it is slightly larger and more massive than the Sun, Altair is actually much younger. It is only about 1.2 billion years old. To compare, our Sun is about 4.6 billion years old. Because of its size, it is also possible that this A-type star is starting to burn helium and is approaching the subgiant phase.

Altair is one of the nearest stellar neighbors of the solar system which lies only 16.73 light-years away. The close distance allowed astronomers to take an image of Altair’s surface using the Michigan Infrared Combiner (MIRC) at the Center for High Angular Resolution Astronomy (CHARA). Only a very few stars have been directly imaged on the surface.

Altair is characterized by its rapid rotation rate which takes only 8.9 hours. As a result of this, it has bulged around the equator. In fact, its diameter in the equator is more than 20% greater than its polar diameter.

Altair star has more than five visual companions that are not physically related to it. These companions are also very distant from Altair itself. It is part of the Summer Triangle—a famous asterism that it forms with other naked-eye stars Deneb and Vega. 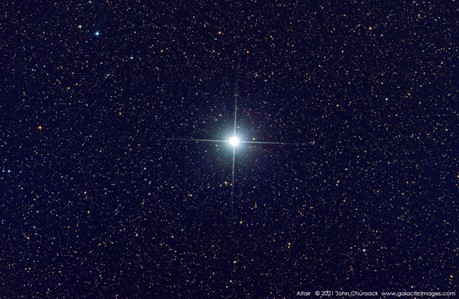 Even in the past, the constellation Aquila has been known to different cultures as a flying creature. Its brightest star was named after it. The name Altair stems from the Arabic Al Nasr Al-Tair, which translates to Vultur Volans in Latin.

The Romans called the constellation Aquila Vultur Volans which means “the flying vulture.” For the most part, the constellation was widely known as an eagle by ancient civilizations like Babylonians, Sumerians, and Egyptians. With this, they called the star Altair “the eagle star.”

The star has many names in different cultures. It is called Bunjil by the Koori people while the people of the Murray River called it Totyerguil.

In 2007, NASA announced that they have named the Lunar Surface Access Module (LSAM) after the star Altair.

Very massive main-sequence stars with more than eight times the solar mass will evolve into supergiants. However, Altair has an average mass like the Sun so it will evolve into a red giant in the next phase.

Unlike supergiants, this star will not explode into a supernova. It will just continue to expand until it sheds its outer layer in the later stages of its life, producing a spectacular planetary nebula.

The dense remnant of this star is called a white dwarf. At this stage, it is no longer producing energy and is only losing temperature over time. Ultimately, it will completely cool off and become a black dwarf. The Sun, which is an average size star, will also go through these stages more than 5 billion years from now. 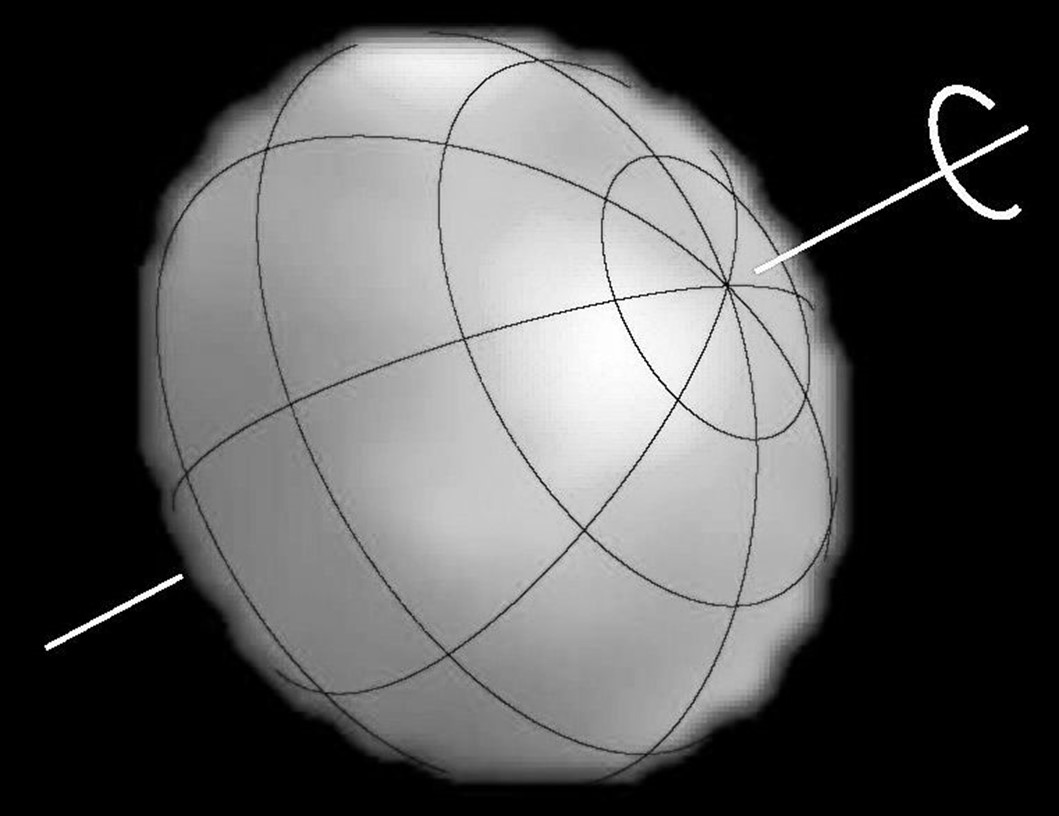 Altair is a fast rotator that only takes 8.9 hours. To compare, the Sun completely rotates on its axis in about 27 days. The equator of the star Altair has a rotational velocity of about 290 kilometers per second or about 180 miles per second. Because of its fast rotation, this A-type main-sequence star is flattened at the poles.

The direct image of the star Altair revealed that it is experiencing gravity darkening. What this means is that it is darker around the equator and brighter in the polar regions. This is a result of the high rotation rate of Altair.

Another example of a fast-spinning star that has a darker equator is Achernar, the brightest star in the Eridanus constellation. 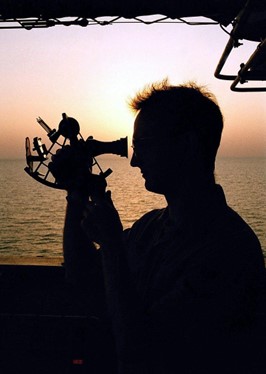 There are about 6,000 stars that are visible to the naked eye. However, some of them are considered more important than others because they serve as reference points. The use of these stars in navigation has been around since ancient times and was identified by the Greeks, Romans, Arabs, and Babylonians. 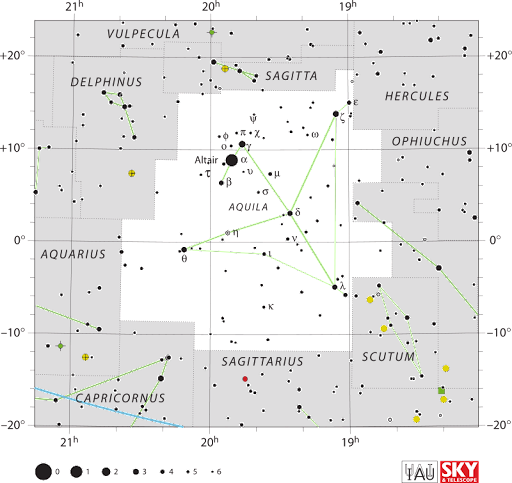 The constellation of Aquila is located on the celestial equator. The name has a Latin origin which means “eagle.” It is one of the earliest 48 constellations identified by Ptolemy. With an area of 652 square degrees, it is the 22nd largest among the 88 modern constellations of today.

Aquila has other notable stars apart from its brightest member, Altair. Some of them are the yellow star Alshain (Beta Aquilae), the orange-hued Tarazed (Gamma Aquilae), and the A-type star Okab (Zeta Aquila). 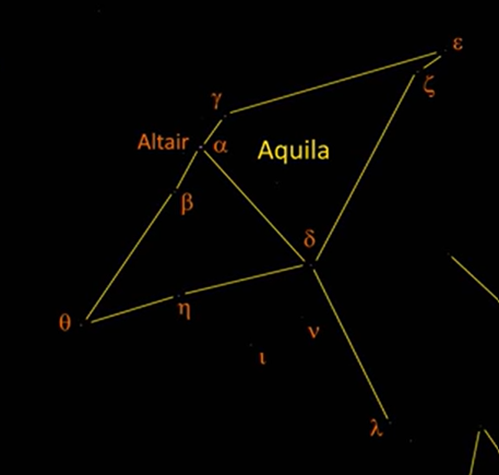 The sky pattern of Aquila is characterized by a notable line of three stars that can be interpreted as the head of the celestial eagle.

Other illustrations depict this trio as part of the eagle’s wings. These three stars are Tarazed, Altair, and Alshain, which are also sometimes referred to as a different asterism called the Shaft of Aquila. 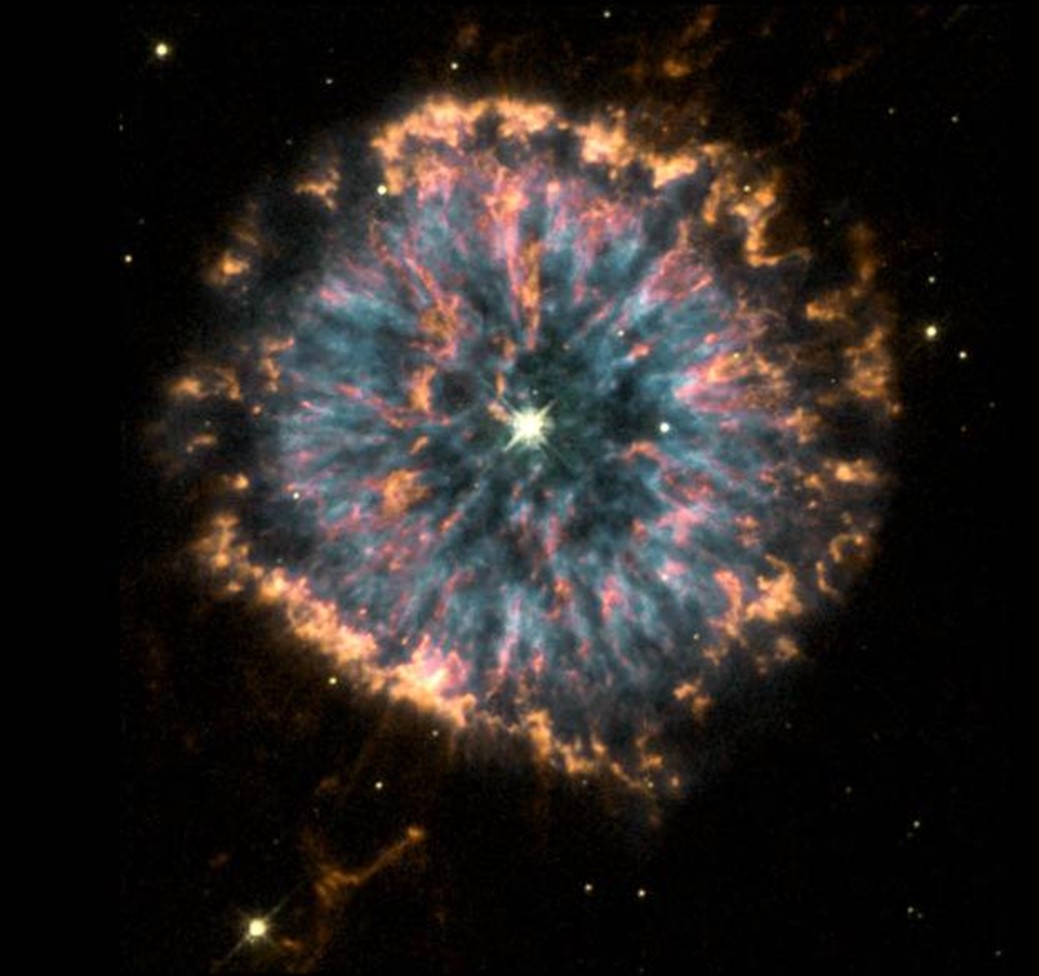 Many interesting deep-sky objects lie in the constellation Aquila because it has the Milky Way as its background. The Glowing Eye Nebula, NGC 6781, NGC 6741, and NGC 6804 are magnificent-looking planetary nebulae in the constellation. Many star clusters and the extragalactic Hercules–Corona Borealis Great Wall are in Aquila too.

Aquila is a summer constellation in the northern hemisphere and the best time to see it is around June to August.

In mythology, Aquila is said to be the eagle that Zeus ordered to kidnap the young man, Ganymede. He was brought to Mount Olympus to be the cupbearer of the gods. In another version of the story, the eagle is Zeus himself transformed into a bird.

Since Zeus is associated with Jupiter in Roman mythology, it is said that the eagle held the thunderbolts of the chief deity. 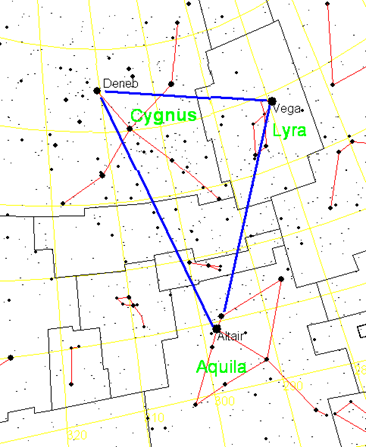 The Summer Triangle also called the Navigator’s Triangle, is an exciting sky pattern in the warm summer nights of the northern hemisphere. It is easy to spot too as it is made up of the stars Altair, Vega, and Deneb. These are the brightest stars of the constellations Aquila, Lyra, and Cygnus, respectively.

The three points of the Summer Triangle are all bright first-magnitude stars. Altair is an A-type main-sequence star with a 0.76 visual magnitude. It is the 12th brightest star.

Despite the name, we can see this sky pattern in other seasons as well. However, it is most prominent during the summer months of July and August in the northern hemisphere.

It is also important to remember that the name “Summer Triangle” describes the time it is seen best in the northern hemisphere. Around this time, however, it is winter in the southern hemisphere.

How To Spot the Summer Triangle? 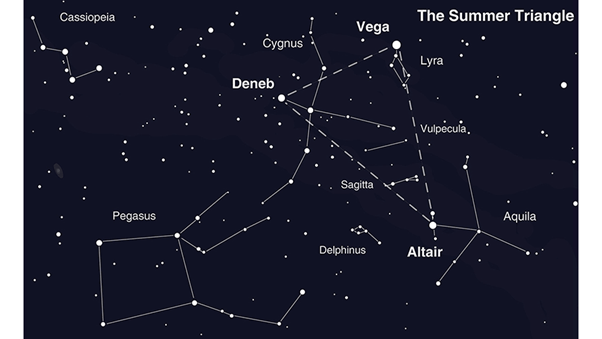 The stars of the Summer Triangle asterism are hard to miss during summer in the northern hemisphere. The constellations of Aquila, Cygnus, and Lyra are high in the sky during the summer months so this is the best time to see them.

To spot the Summer Triangle, look east to find the unmistakable blue star that is Vega. It is the brightest among the three so it is also the easiest one to find. As the fifth brightest star in the sky, we can see this star even in areas with high levels of light pollution. Once we find Vega, it is much easier to locate the other stars that make up the Summer Triangle.

Using Vega as an anchor point, look to its lower right to see the white star Altair. This is the second brightest star in the asterism. After that, go back to Vega and look to its lower left and you can spot Deneb. It has a blue-white hue and is the least bright of the Summer Triangle stars.

The Summer Triangle asterism spans a big area in the sky since it connects three stars from different constellations. However, once you know how to find this sky pattern, it will become easier to recognize as it is one of the most prominent features of the summer night sky.

Another exciting feature is that the Milky Way passes through this big triangle. The rich field of stars can be fully appreciated when viewing under a dark sky.

Where Can You See Altair in the Night Sky? 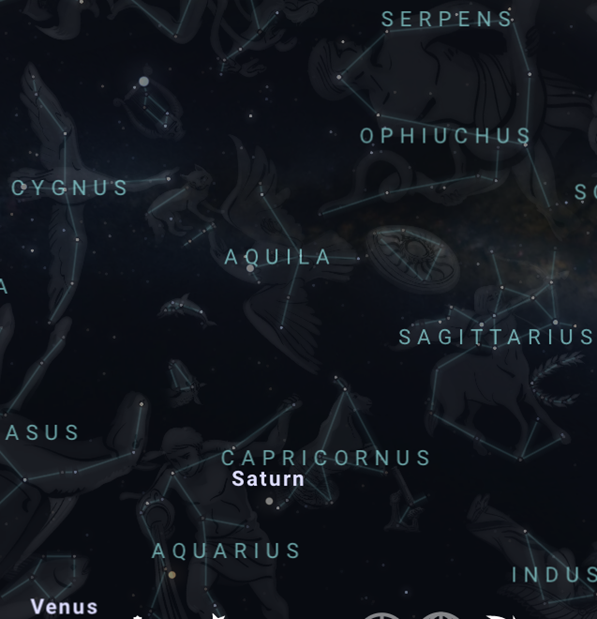 The first step to locating Altair is finding its constellation first. Aquila the Eagle is surrounded by other constellations which can serve as reference points to find it. These surrounding constellations are:

How and When to Find the Altair Star? 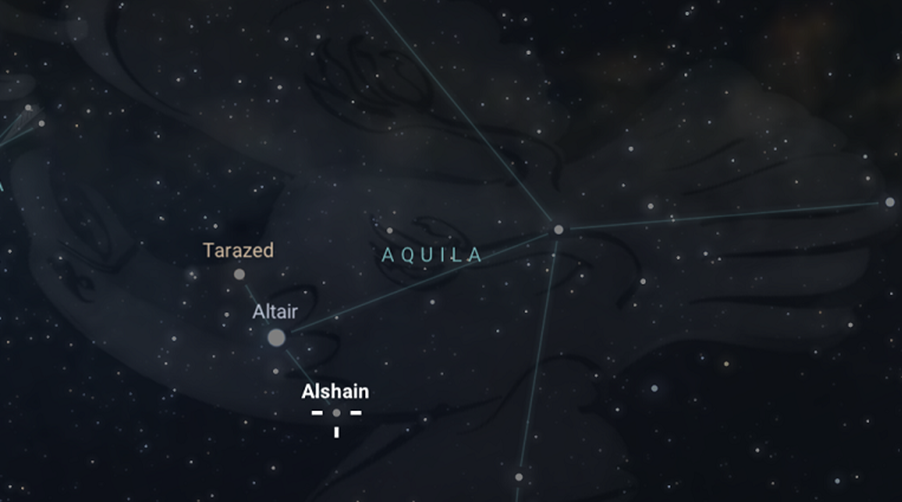 Once the sky pattern of Aquila is identified, it is much easier to locate Altair. It is the brightest star in the constellation after all. Depending on how one would interpret and connect its star, Altair can be interpreted as the celestial eagle’s eye or a part of its wings.

In the constellation, Altair is flanked by two relatively bright stars Tarazed and Alshain. The trio of these stars is very noticeable in Aquila. The brightest point of the three is Altair, in the middle.

Another easy way to spot Altair is through the Summer Triangle asterism. It is located in the lower right part of the very bright star Vega. The Milky Way is another great reference too because it passes between these two bright stars.

Because of its brightness, Altair has long been recognized by people in the past and they have included it in their mythology.

The Koori people are Aboriginal peoples of Victoria in Australia. According to their mythology, Bunjil is a wedge-tailed eagle who was also the creator. He has two black swan wives.

Another important deity is the crow Waang who is in charge of the wind. Bunjil asked Waang to open a bag to let the whirlwinds out. A cyclone was created when Waang did so. However, Bunjil asked to open it again for a stronger wind.

The wind was much stronger this second time around which blew Bunjil and his family away in the sky. Bunjil became the white star Altair. His two wives became the stars Alshain and Tarazed and stayed close to him in the sky, flanking the star Altair.

In Chinese mythology, the stars Vega and Altair are star-crossed lovers. The much brighter star Vega is the goddess Zhinü while Altair is a mortal cowherd named Niulang.

The goddess Zhinü is the daughter of the Jade Emperor. She was tasked to weave her father’s robes from the clouds. One day, she came down to Earth to bathe in a river. She met a simple cowherd named Niulang and the two instantly fell in love.

They decided to marry each other and had two children. Zhinü was enjoying her family life that she did not come home and abandoned her duty with her father. Her father was furious and he ordered his daughter to be taken back home.

The emperor created the Heavenly River (Milky Way) to separate Niulang and Zhinü forever. The two were so heartbroken that they became the stars Vega and Altair. Their two children became stars too. They were placed with their father in the heavens as the stars Alshain and Tarazed.

Zhinü and Niulang’s love for each other never faded despite the circumstances. Because of that, they were allowed to see each other once a year—on the seventh day of the seventh month. On that special day, it is said that magpies flock together to form a bridge over the Heavenly River so the two lovers can meet.

How To Spot the Summer Triangle?: tps://nightsky.jpl.nasa.gov/images/news/SummerTriangleFinder_896.png

Where Can You See Altair in the Night Sky?: https://stellarium-web.org/

How and When to Find Altair?: https://stellarium-web.org/