The Aldebaran star is the brightest of all the zodiac constellations. It is also one of the two stars in Taurus included on the list of the 58 navigational stars. 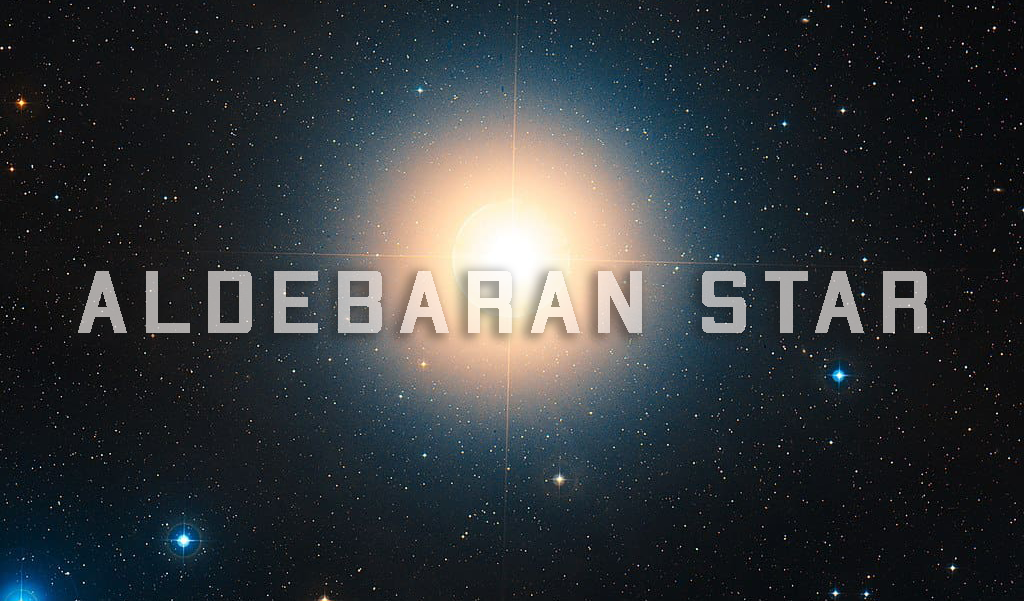 The constellation’s other navigational star is Elnath, Beta Tauri. Aldebaran is also the fourth brightest star in the sky in near-infrared wavelengths. With a J-band magnitude of -2.1, it is only outshone by Betelgeuse (-2.99), R Doradus (-2.6) and Arcturus (-2.2). The name Aldebaran comes from the Arabic al Dabarān, meaning “the follower.” It refers to the star following the bright Pleiades cluster across the sky.

The name is derived from the phrase Nā᾽ir al Dabarān, “the bright one of the follower,” which was the star’s original name. The star name was officially approved by the International Astronomical Union’s (IAU) June 30, 2016. 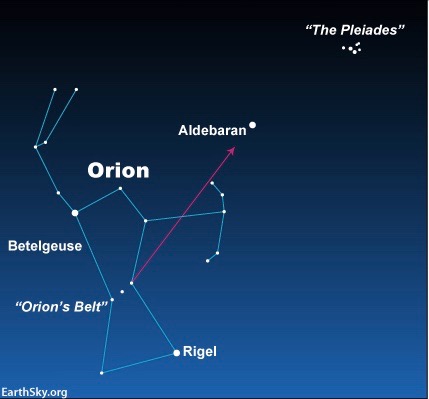 The star Aldebaran is located in the constellation of Taurus, around 65.3 light years away from Earth. It is very easy to find and identify because it is one of the brightest stars in the sky and has one of the best known asterisms — Orion’s Belt — pointing at it.

It is the brightest star in the region between the Belt and the Pleiades. Aldebaran is also one of the six first-magnitude stars that form the Winter Hexagon, also known as the Winter Circle. This asterism dominates the evening sky during the northern hemisphere winter and contains the Winter Triangle and most of the constellation of Orion.

The star also lies in the same line of sight as the Hyades, which is the nearest open star cluster to Earth. Aldebaran lies only 5.47 degrees south of the ecliptic, the Sun’s apparent path across the sky, and can be occulted by the Moon. An occultation that occurred on September 22, 1978 allowed astronomers to get a fairly accurate estimate for the star’s diameter. 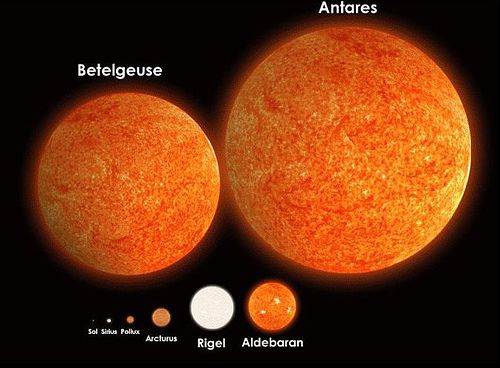 Aldebaran is a giant star of the spectral type K5+ III and a slow irregular variable (LB) star. It has an apparent magnitude that varies from 0.75 to 0.95. It has exhausted the hydrogen supply in its core. As it evolved off the main sequence, it started to expand to its current size. Now it is on the red giant star branch in the hydrogen shell burning phase.

The star is 44.13 times larger than the Sun, with a diameter of about 61.4 million kilometres. This means that it is larger than giants such as Pollux, Arcturus and Unukalhai. However, it does not rival supergiants such as Antares, Rigel and Betelgeuse.

Alderbaran’s MOLsphere, which is the molecular layer beyond the chromosphere, stretches across a distance 2.5 times the star’s radius and has a temperature of 1,500 K. Lines of water, carbon monoxide and titanium oxide have been detected in its spectrum.

The star also has several faint visual companions, as well as a planet in its orbit. The first is an 11th magnitude star separated by 117’’, which was later discovered to be a binary star. Another companion, a 14th magnitude star, was discovered at a separation of 31’’.

The planet in Alderbaran’s orbit, Aldebaran b, was first speculated in 1993, but was confirmed in 2015. The planet is thought to have at least 6.47 Jupiter masses and an orbital semi-major axis of about 1.46 astronomical units.

Aldebaran is one of the most studied stars in the sky. This led to it being used to calibrate the instruments of the Hubble Space Telescope. It’s also one of the 33 stars used as benchmarks to calibrate the stellar parameters during the Gaia observatory mission.

About 5,000 years ago, Aldebaran was close to the vernal equinox. The instant when the Sun crosses the celestial equator, marking the beginning of spring in the northern hemisphere. Due to the Earth’s axial precession, the star has since moved away.

In 1718, Aldebaran was one of the bright stars whose movement across the sky led to the discovery of proper motion. The English astronomer and mathematician Edmund Halley studied the records of the lunar occultation of the star that occurred on March 11, 509 CE. He found that the star had moved several arcminutes to the north since that time. Halley compared his measurements with the data Ptolemy provided in his Almagest in the 2nd century CE. He discovered that Sirius and Arcturus has also moved significantly. This led to the realisation that the stars were not “fixed” as it was originally thought.

In medieval astrology, Aldebaran was one of the 15 Behenian fixed stars. It was believed to be a source of special astrological power and it was associated with the planets Venus and Mars. Each star was connected with a plant and a gemstone, and Aldebaran was connected to milk thistle and ruby.

In Babylonian astronomy, Aldebaran marked an asterism known as Pidnu-sha-Shame, the Furrow of Heaven.