With an apparent magnitude of 2.87, Alcyone or Eta Tauri is the third brightest star in the Taurus constellation. It follows the giant stars Aldebaran and Elnath whose apparent magnitudes are 0.75–0.95 and 1.65, respectively. Let’s look at some more interesting facts on Alcyone star to get us started!

Interesting Facts About the Star Alcyone 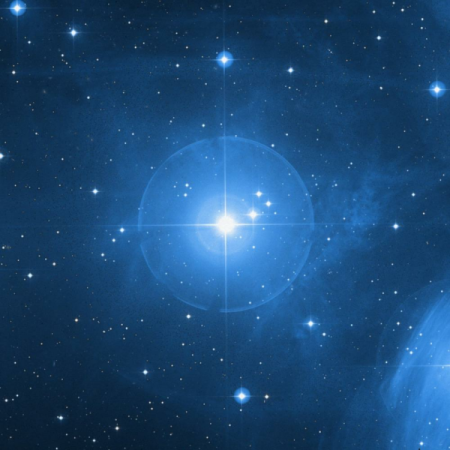 Alcyone, or Eta Tauri in the Bayer system, is a B-type star in the zodiacal constellation of Taurus the Bull. It is a multiple star system located roughly 440 light-years from the solar system.

The eponymous Alcyone is the primary star in the system and is designated Alcyone A. Its closest companion is located at roughly 0.031 arcseconds or the same distance as the Jupiter-Sun distance.

Together with this giant star are three smaller companions. As listed in the Catalogue of Components of Double and Multiple Stars, Alcyone B or 24 Tauri is a main-sequence star. The other component, designated Alcyone C, is a variable star. The third component is an F-type star that is also in the main sequence.

Since it is already in the giant stage, Alcyone A is about 9 times the size of the Sun and around 6 times more massive. It is much brighter than the Sun and radiates with 2,030 solar luminosities. The blue-white glow of Alcyone shines with an apparent magnitude of 2.87.

The naked eye limit of stars is around the 6th magnitude, so we can easily see Alcyone without needing telescopes and other observational equipment. In fact, it is the third brightest star that we can see in the constellation Taurus. 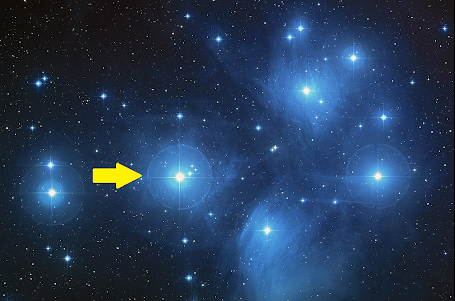 Alcyone is part of the famous Pleiades open cluster which is also called the Seven Sisters. The brightest stars in this cluster can be easily seen with the naked eye. They form an easy to recognize assembly in the sky that looks like a smaller Little Dipper. These stars formed from a molecular cloud around 75 to 150 million years in the past.

Though it is sometimes nicknamed the “Seven Sisters,” there are more than 800 stars in this cluster—and Alcyone is the brightest of them. The stars in the Pleiades cluster are fast rotators. This is a characteristic that Alcyone also has, which causes it to eject gas from the equator. This gas surrounds the star in a disk-like structure.

The name “Alcyone” has its roots in Greek mythology. According to the story, she was one of the Pleiades or the Seven Sisters. They were the seven daughters of Atlas and the Oceanid nymph Pleione.

In Chinese astronomy, this star is called “the Sixth Star of Hairy Head.” It forms an asterism called “Hairy Head” with other bluish stars in the Pleiades cluster.

The multiple star system of Alcyone is composed of four stars. These are:

The primary star Alcyone is a Be star with an absolute magnitude of -2.39. It is sometimes called Alcyone A to differentiate it from the rest of the stars in the system. The companions are smaller and less bright than this blue giant.

Component B is called 24 Tauri. It is a 6.28 magnitude star that gives off a white hue. This is an A-type main-sequence star which is separated by 117’’ from Alcyone A. Another component is a Delta Scuti variable given the designation V647 Tauri. The apparent magnitude of this star changes from 8.25 to 8.30 in 1.13 hours.

The faintest star component in the system is Alcyone D. It is an F-type star with an apparent magnitude of 9.15. In the Washington Double Star Catalogue, it is recognized as a double star system. 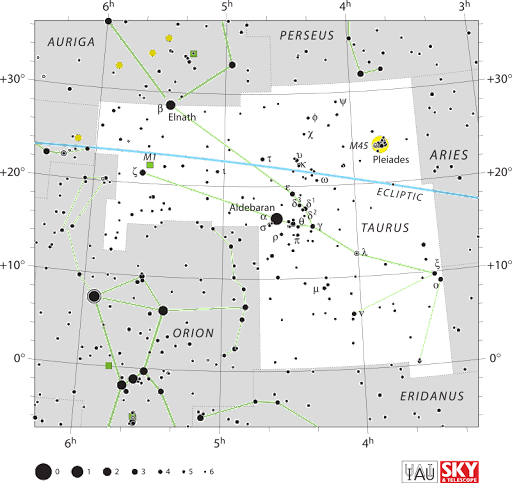 Taurus is one of the 12 constellations of the zodiac. It is chosen so because it lies in the ecliptic or the apparent path that the Sun takes in a year. Of the 88 modern constellations, it is the 17th largest constellation recognized by the IAU.

Taurus stands as the celestial Bull. This constellation has been recognized since ancient times. In different star atlases, it is depicted as a bull with two long horns. Only half of the bull’s body is depicted. Also, as seen in cave paintings, this constellation is often illustrated with the Pleiades.

The constellation Taurus is most prominent during winter in the northern celestial hemisphere. The red star Aldebaran shines the brightest in this constellation. With an apparent magnitude that varies around 0.75 to 0.95, this red giant is the 14th brightest star in our night sky. Also, it is part of the prominent Winter Hexagon asterism. 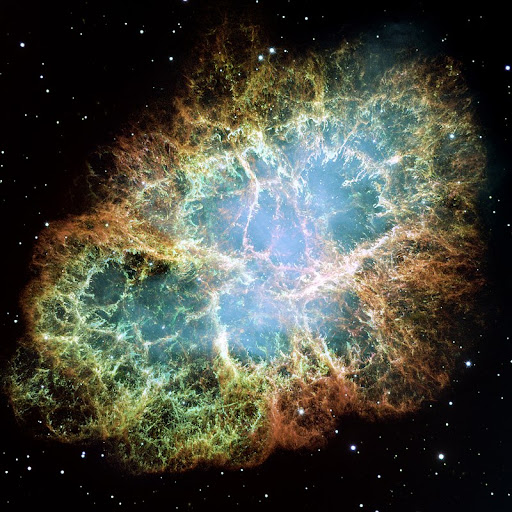 Aside from the famous Pleiades, the constellation of Taurus is also host to the Hyades. The Hyades is another open cluster that we can see unaided. It appears bright because it is the nearest open cluster to us. Together, these two star clusters form what is called the Golden Gate of the Ecliptic.

NGC 1514 or the Crystal Ball Nebula is another deep-sky object located in Taurus. The supernova remnant called the Crab Nebula is also in the constellation. The annual Taurid and Beta Taurid meteor showers originate from Taurus too.

Alcyone and the Pleiades 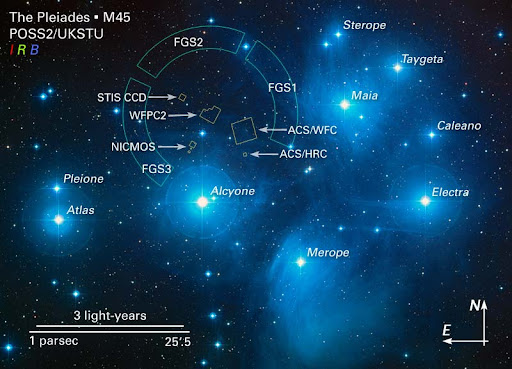 The Pleiades is a bright star cluster that we can easily see with the naked eye. It has a distinct shape that makes it look like the famous Little Dipper asterism. Because of that, many people often mistake it as the Little Dipper.

However, these two sky patterns are very different. While the Little Dipper is part of the Ursa Minor constellation, the Pleiades is in Taurus the Bull. It is also called the Seven Sisters and is designated Messier 45 in the Messier catalogue.

The Pleiades lies about 444 light-years away, making it one of the closest open clusters to us. Hot blue stars are the most prominent in the cluster but there are also reddish stars that are much fainter.

Below are the most prominent members of the Pleiades:

The Pleiades is about 100 million years old. In stellar terms, It is considered a young star cluster. In mythology, the Pleiades are the sisters of the Hyades, which is also the name of another naked-eye open cluster in the Taurus constellation.

Open clusters like the Pleiades will eventually disperse and separate because of gravitational interactions with other objects. However, it is estimated that they will remain together for the next 250 million years or so.

Where Can You See Alcyone Star in the Night Sky? 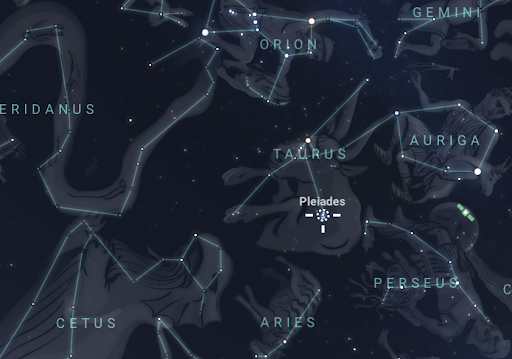 There are many ways to spot the star Alcyone in the night sky. First, we can follow its coordinates, indicated below:

How and When to Find Alcyone

Alcyone, together with the constellation of Taurus, is most prominent in the northern sky during winter.

Alcyone is located at the center of the Little Dipper-like pattern of the Pleiades. With that said, we must locate the star cluster first.

We can spot the Pleiades using the nearby Orion constellation. Orion the Hunter is arguably the easiest constellation to locate, so it is a good point to start with. By making an imaginary line connecting the three stars of Orion’s Belt and extending past Orion’s Shield, we will be pointed to the Taurus constellation.

Specifically, this imaginary line will bring us to Aldebaran, the brightest star in Taurus. It represents the eye of Taurus the Bull. We can easily see the Pleiades once we see Aldebaran. At the center of this small Little Dipper figure is Alcyone. Bringing a pair of binoculars will also help in seeing this blue-white star even better.

Alcyone and the Pleiades in History & Mythology 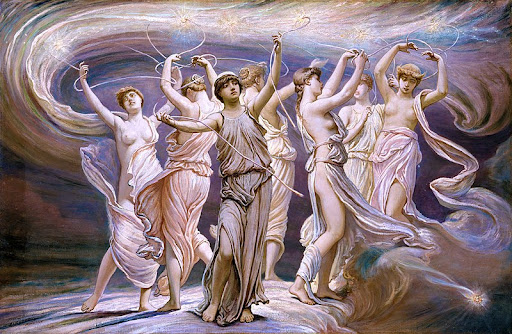 In Greek mythology, Atlas was doomed to hold up the world on his shoulder. This was the punishment given to him by Zeus after the Olympians defeated the Titans.

According to stories, the Hyades had a brother called Hyas. He was a hunter but was one day killed by a lion. The Hyades loved him so much that they wept for his death. They were so broken that they took their lives because of it. In turn, the Pleiades were also so devastated by their sisters’ death that they also followed them.

In the more famous version of the story, it was said that the giant hunter Orion was pursuing the Pleiades. Their father, Atlas, was not able to protect his daughters because he was holding the world on his shoulders. Zeus helped the sisters by turning them into stars in the sky.

A different myth also states that Alcyone bore three children with the god of the sea Poseidon. Their children were Hyrieus, Aethusa, and Hyperenor.

In a different story, Alcyone was the wife of Ceyx. They loved each other so dearly that they often likened their relationship to that of Zeus and Hera. The gods heard this but they were not happy about it.

When Ceyx was traveling at sea, Zeus struck the mortal’s ship with his thunderbolt. Alcyone was so worried about her husband that she prayed for his safe return. However, she was too late because her husband has already drowned. Ceyx appeared in her dreams to tell her what happened. Alcyone was heartbroken so she went to the sea and drowned herself, wanting to be with her husband.

The gods saw what happened and were moved by Alcyone and Ceyx’s love for each other. Because of that, they were turned into kingfishers (halcyons). During winter, they were given days of calm to let Alcyone (as a bird) lay her eggs. This is where the expression “halcyon days” came from. 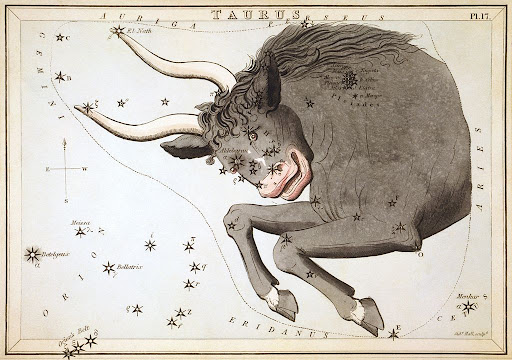 According to Greek mythology, Zeus turned himself into a bull to abduct the Phoenician princess Europa. In another story, it was said that the bull is Io, one of Zeus’ many mistresses. The king of the gods turned her into a heifer to hide from his wife Hera.

Alcyone and the Pleiades: https://upload.wikimedia.org/wikipedia/commons/e/e1/M45map.jpg

Where Can You See Alcyone in the Night Sky?: https://stellarium-web.org/