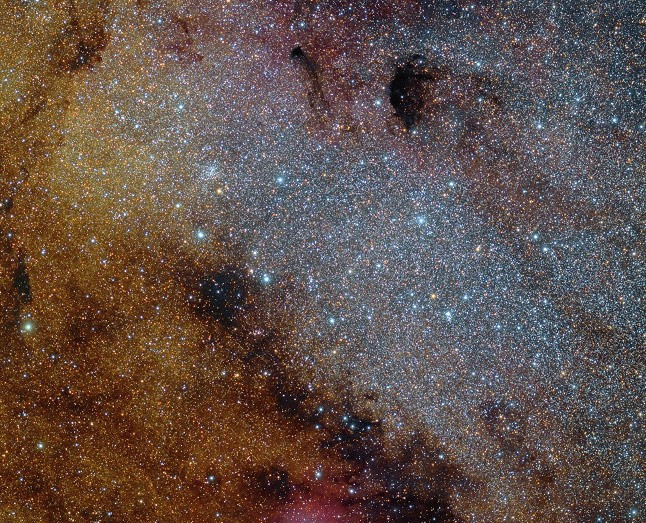 The cloud lies in the Sagittarius Arm of our galaxy, the next inner spiral arm to our own. It contains different types of objects, including stars and clusters that lie up to 16,000 light years away from Earth. This gives the cloud a significant depth. In the night sky, the star cloud appears about nine times larger than the full Moon.

It is located close to the Omega Nebula and open cluster Messier 18, both of which are north of the Sagittarius Star Cloud. The cloud is one of only three Messier objects that are not actual deep sky objects. The other two are the double star Winnecke 4 (WNC 4) in Ursa Major, catalogued as Messier 40, and the asterism Messier 73 found in Aquarius constellation.

The best time to view Messier 24 is during the summer months. It can be found 4 degrees north of Polis, Mu Sagittarii, the bright blue giant star above the Teapot asterism, or 7 degrees north and a little west of Kaus Borealis, the star that marks the top of the Teapot.

The Small Sagittarius Star Cloud was originally thought to have a magnitude of 4.6, but more recent estimates place it a full two magnitudes brighter, at 2.5. Because the light of the star cloud is spread over a large area, estimating its brightness can be difficult.

It is visible to the naked eye whenever the Milky Way itself is visible, with many stars being visible through the galaxy’s obscuring band of interstellar dust. The stars are densely concentrated — the most dense concentration of individual stars visible using binoculars, with around 1,000 stars visible within a single field of view.

The brightest star in Messier 24 is HD 167356. It is a white supergiant with an apparent magnitude of 6.05. This star is also an Alpha-2 Canum Venaticorum variable and shows small changes in brightness as it rotates. There are three other stars in M24 with visual magnitudes between 6.5 and 7.0.

The star cloud contains NGC 6603, which is a faint open cluster of about 30 stars located in the brightest region of the star cloud. The cluster was discovered by the English astronomer John Herschel between 1825 and 1833. It has a visual magnitude of 11.4 and is around 9,400 light years away from us.

There are two planetary nebulae in the Cloud — M 1-43 and NGC 6567 — and two prominent dark nebulae. The darker of the two is Barnard 92, which lies on the northwestern side and was discovered by Edward Emerson Barnard in 1913. On the northeast side is Barnard 93, as large as Barnard 92 though less obvious.

The Sagittarius Star Cloud was discovered by Charles Messier in 1764, who described it as a “large nebulosity containing many stars”.