.The Jewel Box Cluster, also known as the Kappa Crucis Cluster, is an open star cluster located in the constellation of Crux. It has the designation NGC 4755 in the New General Catalogue.

The cluster has an apparent magnitude of 4.2 and is visible from southern latitudes throughout the year. It can’t be seen by northern observers, except for those living in tropical latitudes, who can briefly catch it near the southern horizon during the winter and spring. 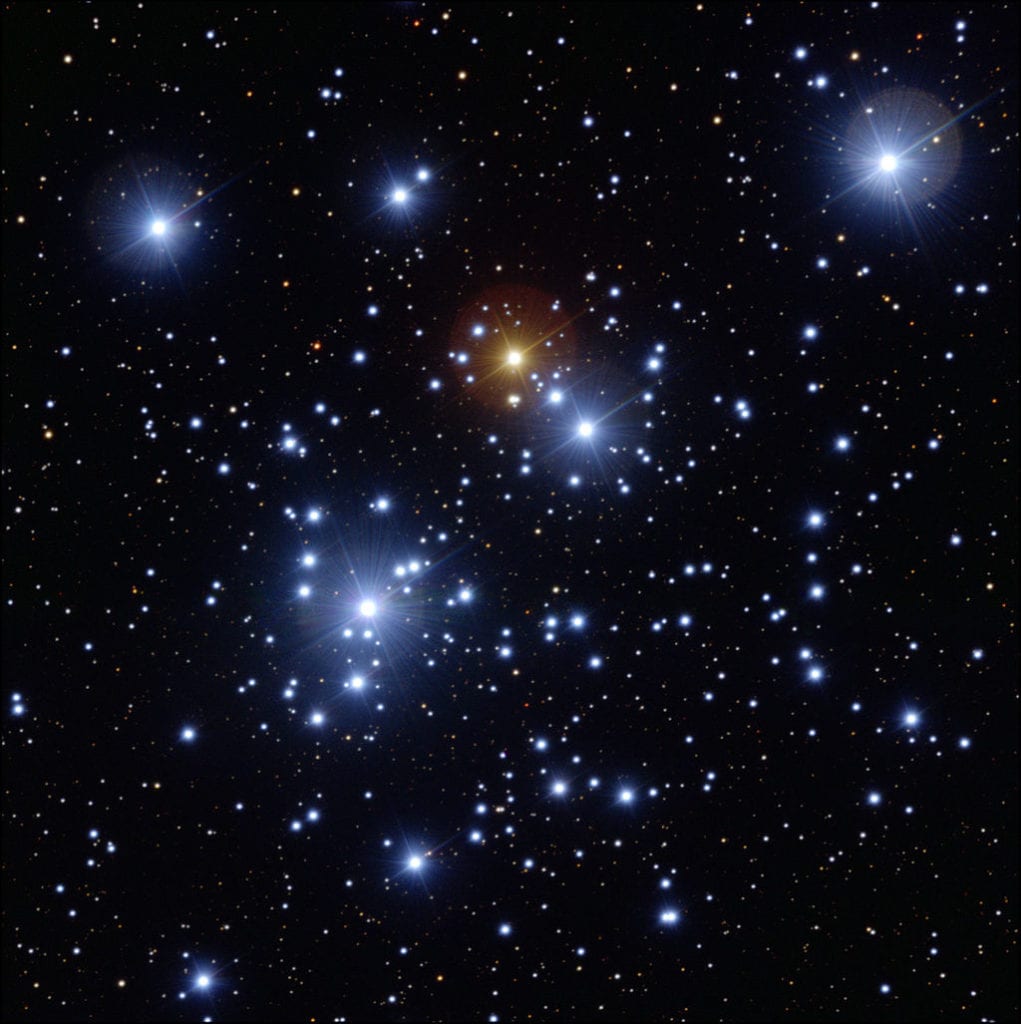 The Jewel Box Cluster is located around 6,440 light years away from Earth in the constellation Crux. The exact distance at which it is located is difficult to determine because some of the cluster’s light is blocked by the Coalsack Nebula. The Coalsack is the most prominent dark nebula in the sky and covers an area of about 7 by 5 degrees between the Southern Cross stars Acrux and Becrux.

The cluster is one of the finest objects in the southern sky, covering an area of 10 arc minutes (20 light years), and best seen in large binoculars and small telescopes. Without binoculars, it appears as a fuzzy star to the naked eye.

The cluster is easy to recognise because of its A-shaped asterism, formed by its four bright stars. It is easy to find in the sky as it is located just a degree to the southeast of Beta Crucis (Mimosa), one of the bright stars that form the Southern Cross.

The Jewel Box Cluster is one of the youngest known open clusters in the Galaxy, with an estimated age of 14 million years.

The Jewel Box Cluster contains just over 100 stars, of which the brightest ones are supergiant stars. Some of these stars are also the brightest stars in the Milky Way galaxy. One of the central stars is a red supergiant and stands in contrast to the nearby luminous, massive blue stars.

The four brightest stars in the cluster that form the A-shaped asterism are sometimes called the traffic lights. This is because of their varying colors.

The brightest member of the A-shaped asterism is HD 111904. This is a B9 supergiant and suspected variable star with a magnitude of 5.77. It is located at the tip of the A.

Other known stars within the cluster are HD 111990, of the spectral type B1/2 and a magnitude of 6.77. There’s also HD 111613, which is the brightest star in the region of the cluster. It is a B9.5 α Cyg variable supergiant with an average visual brightness of magnitude 5.72

The Jewel Box Cluster was first discovered by the French astronomer Nicolas Louis de Lacaille from the Cape of Good Hope in South Africa on March 25, 1752. He was the first to realise that the hazy star known as Kappa Crucis was in fact a “nebulous cluster”.

The cluster was named the Jewel Box by English astronomer John Herschel. He described it as a “casket of variously coloured precious stones”. He also determined the positions of 100 stars in the cluster in the period from 1834 to 1838. This is why the cluster is sometimes also known as Herschel’s Jewel Box.

In the next few million years, the young, short-lived stars of the Jewel Box Cluster will likely explode as supernovae.