Astronomers have a theory about how the Owl Nebula came to look the way it does. The theory is that the outermost halo formed first by the initial red giant star’s death explosion. Then solar winds formed the two inner halos. Inside the innermost halo is a bi-polar structure that may be responsible for the “eyes.” 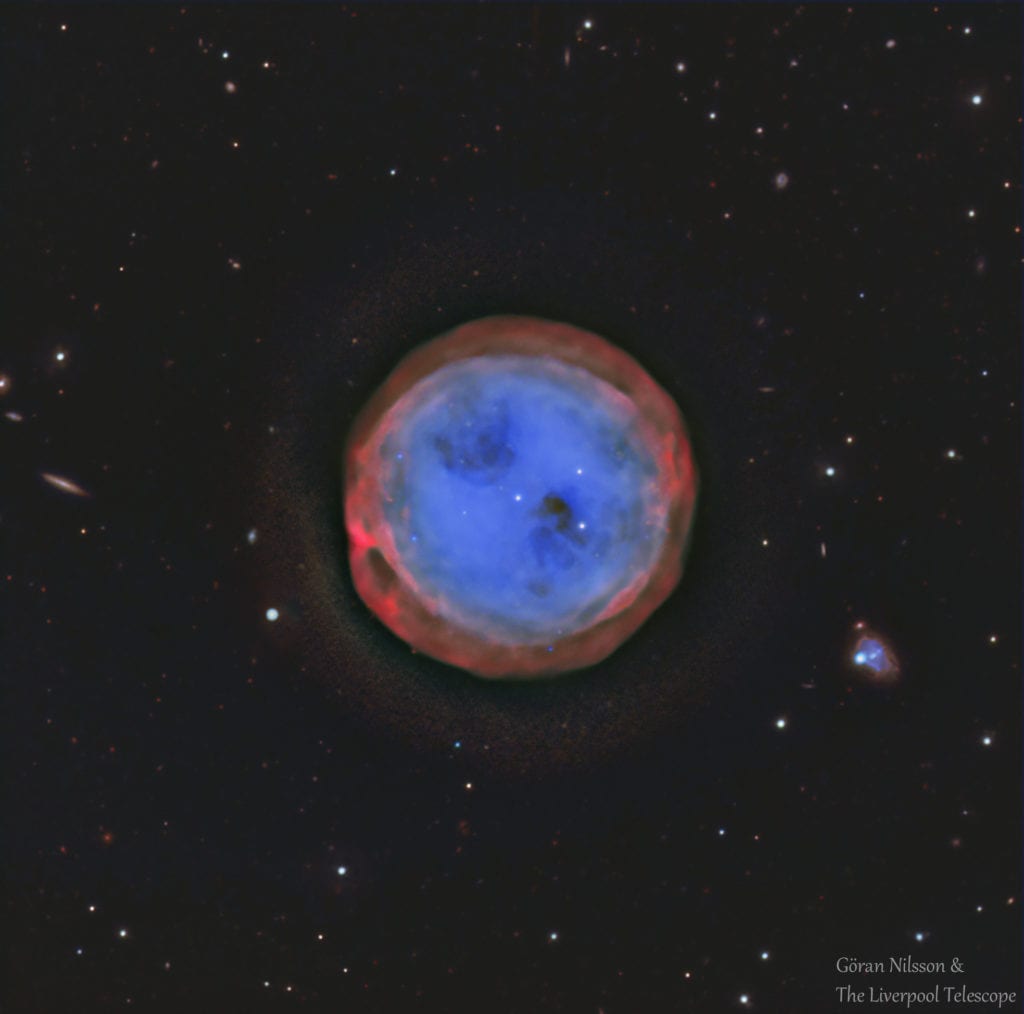 The Owl Nebula is a favorite among astronomers, as is its near-lookalike, the Southern Owl Nebula, which is located in the nearby constellation of Hydra. When paired together, the two nebulae have strikingly similar appearances.

This is the basic categorical information for the Owl Nebula.

– The Owl Nebula was first identified and documented (by hand sketch) in 1848 by a man named William Parsons, the 3rd Earl of Rosse. In his sketch, the Earl drew two eyes in the center of the shell-like rings, which no doubt gave rise to the nebula’s enduring nickname.

– In March 1837, the nebula got its official classification as a planetary nebula, courtesy of Admiral William Henry Smyth.

– Interestingly, the Owl Nebula’s outermost gaseous halo was not observed until 1991.

– Today, the nebula has a brightness magnitude of 9.9, which means it can typically only be seen under dark sky conditions using a telescope of at least medium strength. However, some astronomers have reported being able to catch a glimpse of it using high strength binoculars at protected dark sky viewing areas.

– One of the best-known facts about the Owl Nebula is that it resides just below the “bowl” portion of the famous asterism known as the Big Dipper. In fact, it sits just underneath the southwestern-most part of the bowl.

– The nebula’s close proximity to the Big Dipper is advantageous for new aspiring observers in particular, since the Owl Nebula is considered not just one of the rarest types in Messier’s Catalog, but also one of the most difficult to view. In diameter, it will appear to be just one-tenth of the diameter of the Earth’s Moon, making it necessary to have a very keen eye to detect its presence.

– While the Owl Nebula is called a planetary nebula (along with three other such nebulae), it was never a planet. The name is a misnomer because early observers didn’t have strong enough telescopes to tell the difference between a planet and a nebula from a star explosion.

– The Owl Nebula emits most of its glow in the green spectrum of light, which means it often requires a long-exposure lens and color photography to see its characteristic “eyes” pattern. With sufficient strength telescope, it is also possible to see that one of the eyes is darker than the other eye.

– It is easiest to see the Owl Nebula in the night sky during the spring months. The best viewing will come during the new moon phase when the sky is darkest and after midnight when it will be most visible.

– Current estimates indicate the nebula is at least 8,000 years old, although some estimates place it at 12,000+ years old.

– The Owl Nebula first formed when a red giant star exploded during its death throes, emitting gases and radiation, which is what causes it to appear to glow today.

– The nebula includes gases like oxygen, hydrogen, silicon, sulphur, helium and nitrogen. Hydrogen is present in its greatest concentration in the outermost layer, while oxygen is concentrated closer into the center.

– At this time, the nebula is continuing to expand as the star at its center continues its death process. The calculated rate of expansion is 27 to 39 km/second.

– The gaseous halo around the Owl Nebula is being blown by the solar winds and is expected to dissipate fully much more quickly than the central white dwarf star will fully die out (at a rate of thousands to billions of years).

– The current reigning theory is that the nebula is made up of three cylindrical “shells,” also called emissions or halos. These interlocking components are each a type of cosmic cloud made up of dust and gases. These halos are not all circular in form, either. One of the internal halos is more like a barrel or oval shape, which may be the reason the nebula appears to have “owl eyes.”