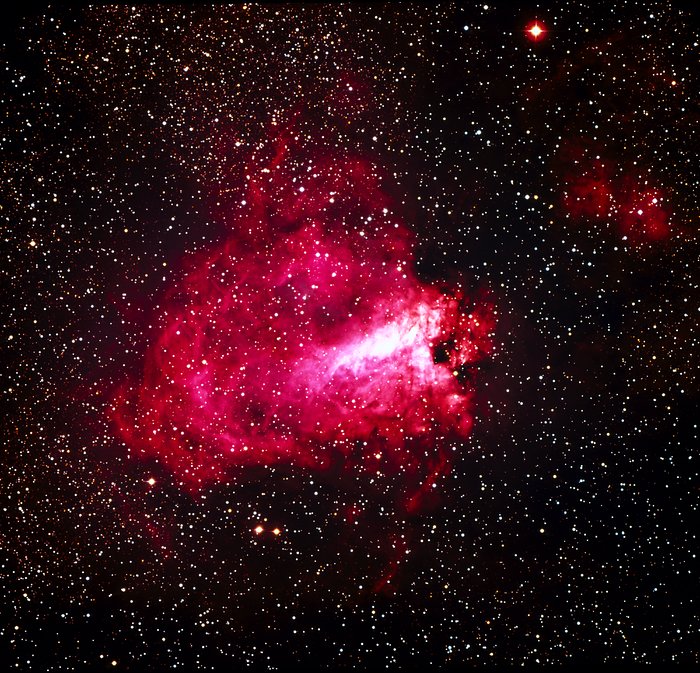 The Omega Nebula has many names

The official name of the Omega Nebula is Messier 17 region of the Milky Way galaxy, often shortened to M17. The beauty of the nebula and the fact it can be seen with the naked eye have allowed the area to be named by different astronomers over the years. Among the many names given to the region of space are the Swan Nebula and the Horseshoe Nebula.

Discovery in the 18th-century

The Omega Nebula was included on a list of eight nebulae submitted to the Academie Francais des Sciences by Swiss astronomer Philippe Loys de Cheseaux in 1745. many of these were discoveries of the Swiss astronomer with the first research being completed into the area of our galaxy by scientists Charles Messier and John Herschel.

Herschel give Omega its name

The English mathematician and astronomer, John Herschel was the first to identify the shape of the Nebula as that of the Greek letter, Omega. In his 1833 research, Herschel explained the shape of the arms of dust, gas, and debris was similar to the Greek capital letter. Herschel continued to study and detail his view of the nebula through 1837 when he traveled to South Africa to improve his view of the galaxy.

The Omega Nebula is over 5,000 light-years from Earth

When looking at the distance of the Omega Nebula from Earth, the area of space is estimated to be around 5,500 light-years away from our own planet. The huge nature of the nebula sees its size estimated at over 15 light-years in diameter. Each light-year is just under six miles in width showing this to be one of the largest star-making areas of our galaxy. The overall area of gases associated with the nebula is thought to be over 40 light-years in size.

Star-making in our galaxy

The birth of stars is an area that has interested scientists and astronomers for centuries with the Omega Nebula an interesting area of research for many. It is thought the Omega Nebula is one of the largest star-making areas of space currently visible to our telescope technology. The combination of gases, debris, and other materials combine to create the young stars that make the area shine in the night sky.

One of the most impressive characteristics of the nebula is the bright nature that makes it easy to spot in the night sky. The deep purples and pinks that the nebula is characterized by are created by radiation from the young stars being born in the region interacting with the gases they are produced from.

Young star clusters are found in the Omega Nebula

One of the main reasons why the nebula is so important to the scientists and astronomers of Earth is the fact it contains many of the youngest stars in the galaxy. Some of the star clusters that can be viewed in the region are thought to only be around one million years old.

The Omega Nebula is located in the Sagitarrius constellation

The Omega Nebula is located in the Sagittarius constellation with its edge visible from Earth instead of its full face. The area containing the nebula is thought to be rich in atomic hydrogen that is vital to the process of creating new stars.