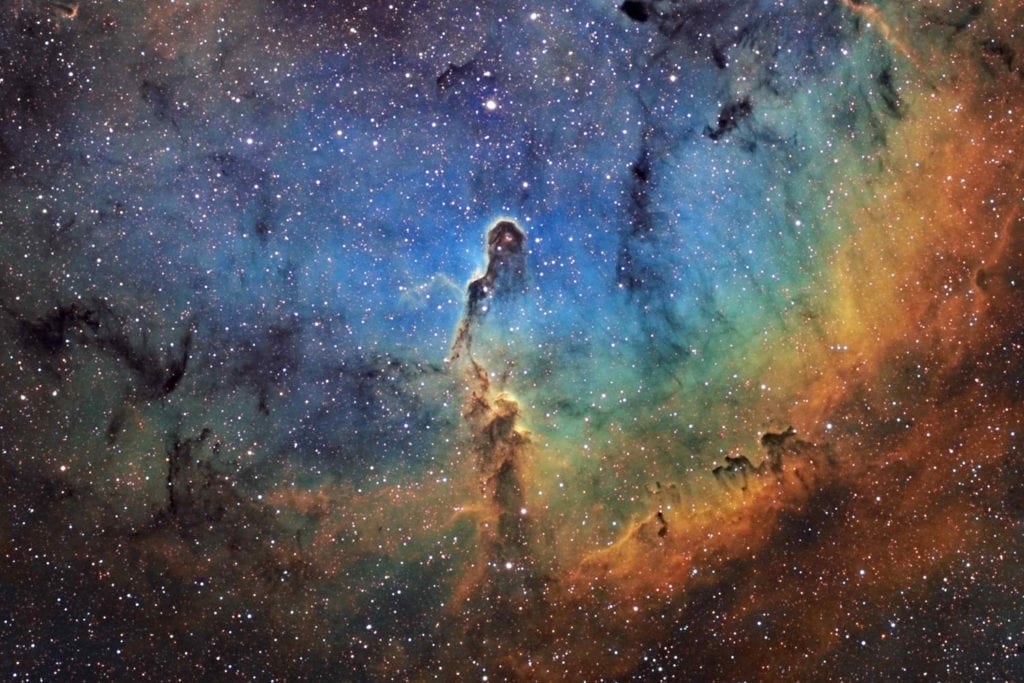 The Elephant’s Trunk Nebula is a dense region of dust and gas found within the considerably larger star forming region IC 1396 in constellation of Cepheus, around 2,400 light years away from Earth.

This emission nebula was named the Elephant’s Trunk because a piece of the nebula resembles an elephant’s head and trunk at visible wavelengths, appearing as a dark patch with a bright winding rim. The nebula is large and relatively faint, stretching over 100 light years. The trunk of the nebula stretches for over 20 light years and is designated IC 1396A.

IC 1396A is a dark, dense globule, eroded by the radiation pressure from the central star that illuminates the nebula.

The Elephant’s Trunk Nebula is a region of star formation in the night sky, with more than 250 young stars identified within and around it, some very young, less than 100,000 years old. The blue multiple star system HD 206267 is responsible for the nebula’s glow, and is located just to the east of IC 1396A. The entire IC 1396 region is ionized by the massive star, except for dense globules that can protect themselves from the star’s harsh ultraviolet rays.

The combined action of the light from the massive star ionizing and compressing the rim of the cloud, and the wind from the young stars shifting gas from the center outward lead to very high compression in this Nebula. This pressure has triggered the current generation of protostars.

Stars In The Elephant’s Trunk Nebula

Many of the stars within this nebula are embedded in regions of thick dust and gas and cannot be seen in visible light. They can, however, be detected in infrared wavelengths, including the very young stars that have only begun to shine. The glowing circumstellar disks of material that surround these stars make the stars bright in infrared images and the disks are considerably thicker when the stars are still very young. They are also very prominent in infrared light.

The brightest visible star in the nebula is Mu Cephei, also known as Herschel’s Garnet Star. It is a red supergiant or hypergiant, located at the nebula’s edge and at a distance of 2,840 light years from Earth. It is one of the reddest stars in the sky and one of the largest known stars, with a radius 1,260 to 1,650 times that of the Sun.

The Elephant’s Trunk Nebula is also home to some other interesting deep sky objects and nebulae, such as the Bubble Nebula, the Wizard Nebula and the Fish Nebula.