It requires a lot of effort for astronomers to detect a nebula. The Egg Nebula consists of clouds of dust and gases covering a huge expanse of space. Yet the vast size of space sometimes makes locating a distant nebula challenging. The plural term for nebula is “nebulae”. Currently, most experts believe two broad types of nebulae exist. Some result from the disintegration of an old star. Other nebulae serve as sites where stars form. 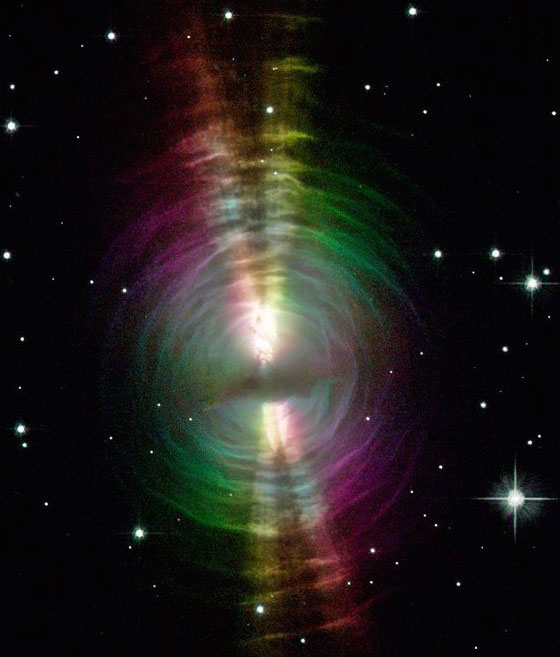 The Trifid Nebula and the Rosette Nebula both likely illustrate star nurseries, places where young stars develop. By contrast, the Egg Nebula may illustrate what happens when a star similar to our Sun approaches the end of its solar lifespan.

The Discovery of The Egg Nebula

When astronomers first detected the Egg Nebula near the Cygnus Constellation, they did not recognize it as a nebula at all. Fritz Zwicky, a Swiss astronomer who worked for many years at the California Institute of Technology, first noted the Egg Nebula. He mistakenly believed it consisted of two galaxies, not a nebula.

The huge size of the Egg Nebula possibly contributed to this impression. It spans a distance of 1 lightyear, i.e. nearly 6 trillion miles. It seems hard to even imagine an location possessing such a vast size! Between 1971 and 1974, the United States Air Force Geophysical Laboratory conducted research that supplied a lot of new information about the Egg Nebula. In 1975, scientists first described it as a nebula. On January 16, 1996, NASA released a colorized photo of this nebula taken in space by the Hubble telescope.

The Nearby Cygnus Constellation

If you look into the night sky, you might see the Cygnus Constellation. However, the Egg Nebula remains impossible to see using eyesight alone. Our knowledge about this area of space developed only after the development of advanced imaging tools.

The Process of Star Disintegration

Astronomers believe the process of the death of a star like the Sun occurs over the span of just a few thousand years. This seems like a long time to human beings, but it constitutes only a small fraction of the lifespan of a star. The rapid end of Sun-like stars perhaps accounts for the difficulty of finding nebula similar to the Egg Nebula. This type of event occurs rarely in the universe from our point of view.

As the star ends, it sheds is outer layers in succession. This expulsion of hot material contributes to the presence of gas and dust particles within the nebula. Scientists seek to evaluate the time span for the end of the star by studying the dust and gas rings around it.

Other Names For The Egg Nebula

People sometimes refer to the Egg Nebula as “the Cygnus Egg”, “RAFGL 2688” or “CRL 2688”. These terms refer to the nebula’s location and/or to the astronomical research catalogues listing it. For instance, the abbreviation “CRL” stands for “Cambridge Research Laboratory Sky-Survey”.

Over the course of time, many different studies have sought to list planets, comets, nebulae, stars, and other objects in space. Multiple names sometimes exist for a single nebula, for example. This situation sometimes causes confusion. During recent years, the International Astronomical Union (“the IAU”) has tried to streamline the naming process.

Observing From a Distance

Astronomers probably would not travel to visit the Egg Nebula in person even if they possessed the technology to do so. Conditions within the nebula would not support human life. The Egg Nebula consists of a vast region of hot gases in space.

However, by using imaging tools like the Hubble Telescope, scientists have discovered a lot of information about the Egg Nebula. Today, human beings enjoy an excellent opportunity to witness the process of star destruction from a safe distance. We may gain insights into what our solar system will look like in the distant future.

Fun Facts About The Egg Nebula