The Discovery of the Cone Nebula

The Cone Nebula has a long history dating back to December 26, 1785, when it was discovered by the German-born British astronomer William Herschel. Herschel had become an overnight sensation among the academics of Europe in 1781 when he used a large telescope of his construction to identify what was then classed as the planet, Uranus and became astronomer to the British Royal Family. Herschel was well known among the astronomers of the U.K. and Europe for his innovative telescope designs that allowed him to make some of the most detailed observations of the night sky with great accuracy. 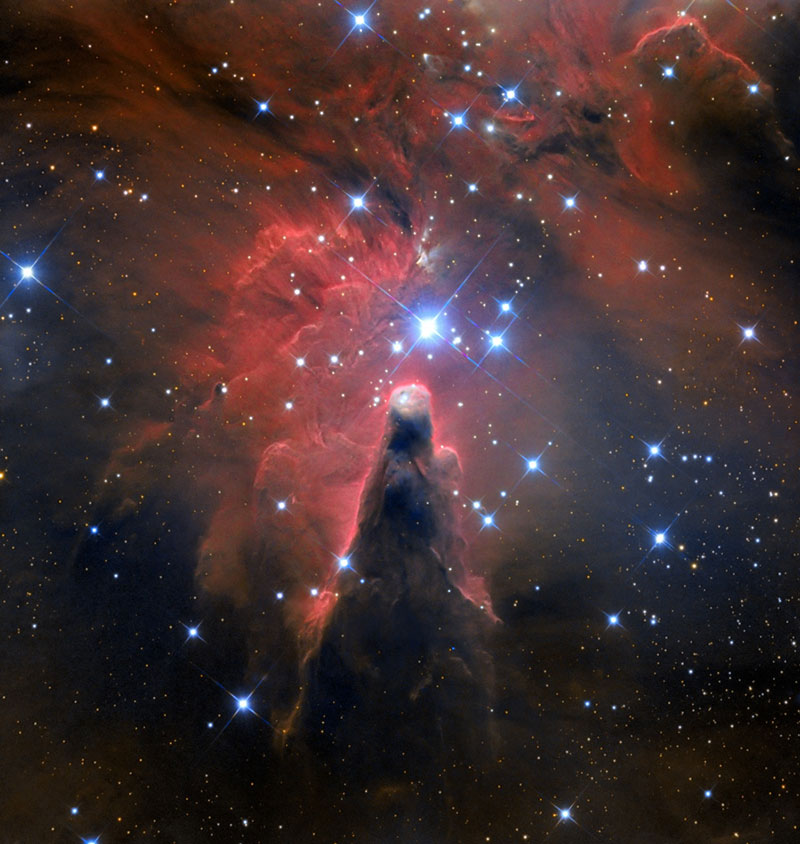 What is the Cone Nebula?

The Cone Nebula is now classed as an HII region of the sky. This is an area of gas and dust that includes atomic hydrogen needed for the creation of stars in space. The nebula is given its name because of the huge pillars of gas and dust that are formed as the huge amounts of radiation reduce the usable area of the night sky available for star creation. The nebula was created when the perfect conditions were developed in space for creating new stars with many astronomers theorizing the giant pillars of gas and dust act as incubators for the fledgling stars until they are fully formed.

The Size of the Nebula

The Cone Nebula is a large area of space that has been estimated in size to be around seven light-years in length. The sheer size of the nebula makes it difficult for images to be obtained of the entire length of the celestial area with most Hubble images capturing the upper area of around 2.5 light-years.

How far is the Cone Nebula away from Earth?

Measuring accurate distances in space can be tricky with different units of measurement used for objects a long-distance away. Astronomers can use light-years or parsecs to measure the distance the nebula sits away from the Earth. The Cone Nebula is thought to sit 2,700 light-years away from Planet Earth with each light-year 5.88 trillion miles in distance.

Where is the Cone Nebula?

The International Astronomical Union decided to combine the classification of the Cone Nebula and the Christmas Tree Cluster as a single object in its catalog of General Classification. The Cone Nebula sits at the southern end of what is known as NGC 2264 with the Christmas Tree Cluster making up the northern section of this location. The nebula is found in the Monoceros constellation that is relatively faint in the night sky of Earth but can be identified by several bright stars close to this area of space.

How does the Cone Nebula get its shape?

The Cone Nebula is often described as a cloud of dust and gas that includes an area of darkness known as an absorption nebula. This area of gas and dust obscures the part of space behind it and allows the cloud to take the form of a pillar as it expands across space. We can pick out the sides of the nebula with ease because the radiation used to create new stars causes the hydrogen to glow red and produce the red halo we tend to see in images of this area of space. Similar pillars of gas and dust have been known to develop in other parts of space where stars are formed.