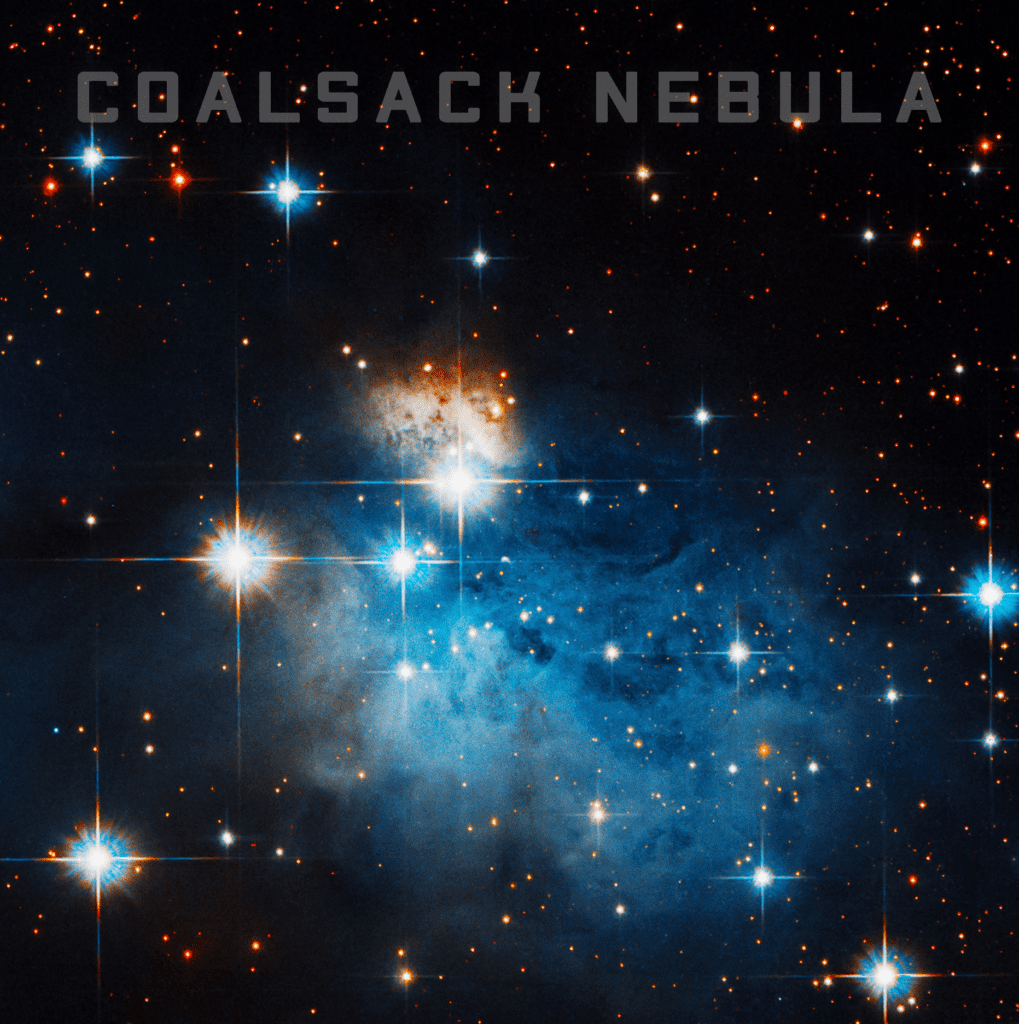 The Coalsack Nebula is one of the most prominent dark nebulae in the night sky, being easily visible to the naked eye as a dark patch obscuring a brief section of Milky Way.

It is located in the constellation of Crux in the southern hemisphere, about 590 light years way from us. It lies east of Acrux (Alpha Crucis) which is the bright, southern pointer star of the southern cross. The Coalsack Nebula covers nearly 7° by 5°, between 30 to 35 light years across, and overlaps somewhat with the neighbour constellations Centaurus and Musca. It is also located near to the Jewel Box Cluster.

The darkness of the Coalsack nebula is the result of dust particles blocking the visible light of stars in the background. The small background starlight that can be seen through the thick dust clouds comes from the reflection of stars the nebula obscures. It appears reddish because dust absorbs and scatters blue light more easily than red.

Some observations of this light extinction of the background stars have revealed that the Coalsack Nebula consists of two large overlapping clouds of dust, which are located 610 and 790 light years away from Earth.

Because it consists of thick clouds of gas and dust, the Coalsack Nebula will not stay dark forever. Millions of years from now, parts of it will be illuminated by the light of young stars.

The Coalsack is identified as C99 in the Caldwell Catalogue. It is not listed in the New General Catalogue and does not have a NGC number.

The Coalsack Nebula has been known since prehistoric times, but was first properly identified by Spanish navigator and conquistador Vicente Yáñez Pinzón in 1499, on his voyage to South America.

It was named “il Canopo fosco” (the dark Canopus) by Italian explorer Amerigo Vespucci and was also called “Macula Magellani” (Magellan’s Spot) or “Black Magellanic Cloud” in opposition to the Magellanic Clouds, which are bright dwarf galaxies visible in the southern sky.

The first formal description of the nebula was provided by Italian-born historian Peter Martyr d’Anghiera between 1511 and 1521. French astronomer Nicolas Louis de Lacaille also provided a description and added the Coalsack Nebula to his 1755 catalogue.

Finnish astronomer Kalevi Mattila proved that the nebula is not completely black, but has 10% of the brightness of the surrounding Milky Way in 1970.

The Coalsack Nebula in Australian Aboriginal astronomy forms the head of the emu in the sky in several Aboriginal cultures. The Emu’s neck can be seen between the Southern Pointers (Alpha and Beta Centauri) and its body stretches across Scorpius.

Amongst the Wardaman people, it is said to be the head and shoulders of a law-man watching the people to ensure they do not break traditional law.

In Inca astronomy this nebula was called Yutu, meaning a partridge-like southern bird or Tinamou. It is associated with the story of the god Ataguchu, who kicked the Milky Way in a fit of anger, causing a fragment to fly off and form the Small Magellanic Cloud. In the story, the Coalsack is the black mark left behind where the broken fragment was.