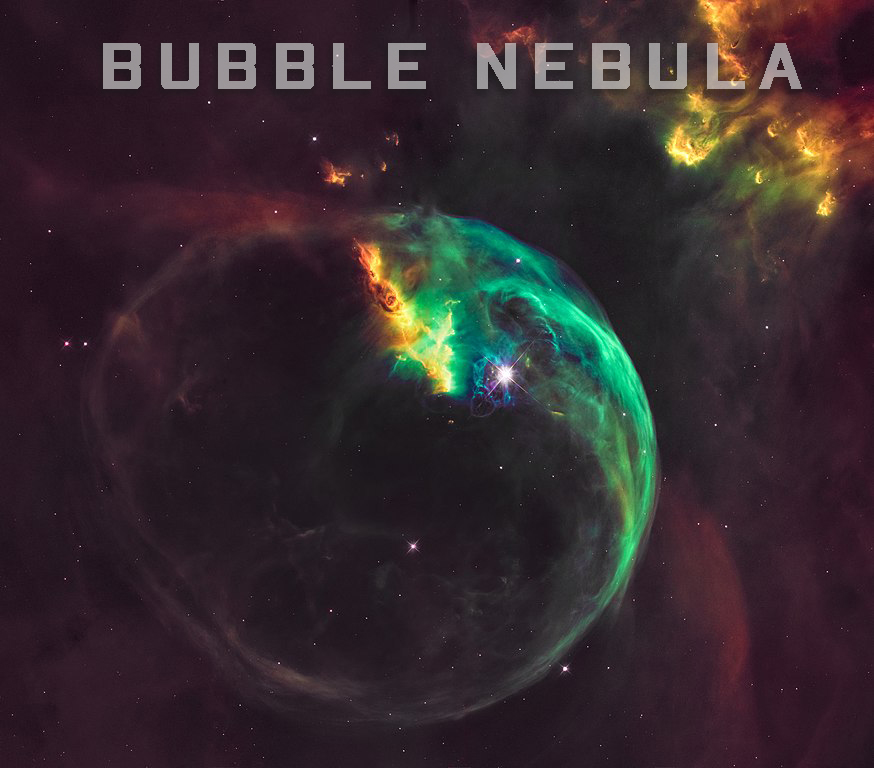 The Bubble Nebula is an H II region emission nebula in our Milky Way, located in the constellation Cassiopeia. It can be found between 7,100 – 11,000 light years away from us and lies close to the direction of the open cluster Messier 52, near the border with Cepheus constellation.

The nebula was given its name because of its shape, which was created by a strong stellar wind from a young, massive, hot, 8.7 magnitude Wolf-Rayet star that shed its material to form the nebula. The star has the designations SAO 20575 and BD+60 2522 and has absolute magnitude of -5.5.

SAO 20575 has a radius 15 times that of the Sun and is 398,000 times more luminous. Its estimated surface temperature is 37,500 K. Soon, the bright star will end its life in a supernova explosion. It has a strong stellar wind and emits an enormous amount of energy.

The central star’s radiation ionizes the bubble-shaped shell, causing the nebula to glow. The Bubble Nebula has an apparent magnitude of 10 and a radius of between 3 to 5 light years. It is around 10 with years in diameter. It is also near a giant molecular cloud which contains the expansion of the Bubble Nebula

The nebula is also often known as Caldwell 11 or Sharpless 162, and is designated NGC 7635 in the New General Catalogue.

In an 8 or 10 inch telescope, the Bubble Nebula appears as a faint shell around the massive star SAO 20575. It is not an easy object to see in the night sky because it has a low surface brightness. The nebula’s irregular shape can be seen in an 16 or 18 inch telescope. You need a pretty good telescope for deep space objects to get a good look at this nebula.

The Bubble Nebula was discovered by William Herschel in 1787.

It was created about 300,000 years ago, when the central star expelled a shell of dust and gas. The expelled material rapidly moved away from the star and, as it interacted with the nearby molecular cloud, it began to create the nebula’s bubble shape. The hot central star, SAO 20575, also continued moving through space and eventually moved away from the center of the nebula.