The Wonderful World of Moons 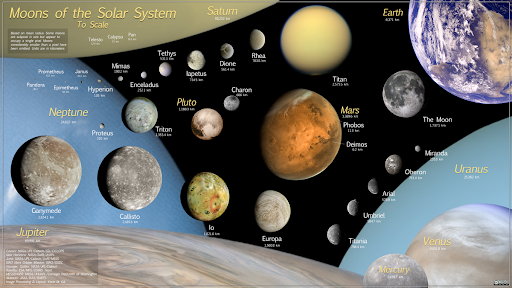 Moons are also called natural satellites. They orbit not just around planets but also around dwarf planets and asteroids. The planets, dwarf planets, and asteroids, in turn, orbit the Sun. The Earth has only one natural satellite, the Moon. However, it is not the only one of its kind in the solar system. So far, there are 214 moons in the solar system that surround planets and dwarf planets. Most of them, 158 to be exact, are already confirmed and were given names. The remaining 56 are still provisional and are awaiting confirmation after more observations. In this post we will be looking at the Ymir moon of the Saturnian system.

Moons of the Solar System

The table above only shows us the number of moons around planets and dwarf planets. Though it was uncommon before, it was found out that asteroids can also hold their own satellites. It was confirmed in 1993 when the moon Dactyl was discovered on the asteroid 243 Ida.

Have you ever wonder why Mercury and Venus have no moons? The reason for that is most likely their close distance to the Sun. The bigger gas giants have more moons they have captured a lot of objects as they formed in the solar system.

The names of the majority of moons were inspired by mythological characters. It not only covers the more common Greek and Roman tales but also those of the Inuit, Norse, and the others.

The moons of Uranus are unique since they were named from the literary works of William Shakespeare and Alexander Pope.

In the Saturnian System 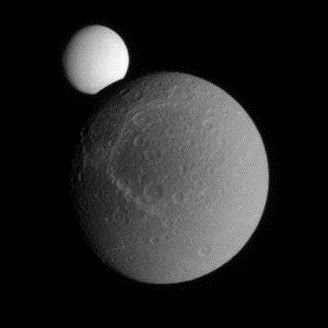 The system of Saturn holds the record for the most number of moons known in the solar system so far. Some of these moons affect the rings of Saturn. Other moons share orbits while some may have affected the colors of others. In the photo above, we can see the moon Dione occulting Enceladus as seen from the Cassini spacecraft.

Saturn’s moons are either regular and irregular. The regular moons formed in the system. They move in the same direction as Saturn (prograde) and their orbits are nearly circular and not inclined. The outer moons which do not have these characteristics are considered irregular satellites. Though, some of them have prograde orbits.

There are three groups of irregular moons of Saturn:

The Norse group is the largest set of irregular satellites of Saturn. The largest irregular moon in the system, Phoebe, belongs in this group.

These moons are grouped together because of similar orbital characteristics. They move toward the opposite direction as Saturn (retrograde). Their semi-major axes are around 12 to 24 million kilometers away from the host planet. The Norse moons have elongated orbits with eccentricities that are between 0.13 and 0.77. These orbits are inclined by about 136° to 175° from Saturn’s plane.

There are 46 Norse moons. Some of them are confirmed, some are provisional, while some are considered lost since astronomers did not see them again after discovery. 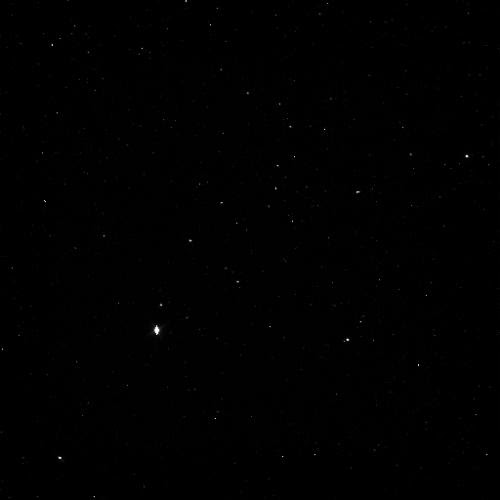 Ymir is an irregular moon of Saturn that has a retrograde orbit, moving in the direction opposite the planet. It is one of the 46 outer irregular satellites known as the Norse group. Ymir, or Saturn XIX, is the second-largest member of the group after Phoebe.

Ymir had a ground-based discovery in 2000. It was given the provisional designation S/2000 S 1. The name means that it was the first new moon of Saturn discovered that year. The International Astronomical Union (IAU) gave it a permanent name three years later, in 2003.

Unlike the regular moons, it is believed that Ymir did not form in the Saturnian system. Instead, it most likely originated somewhere else. It was just captured later on by the gravitational pull of Saturn. The exact origin of this moon is still a mystery, like the other irregular satellites.

Ymir’s orbit is not circular. It is also inclined from the plane of Saturn. This moon is the largest among the irregular satellites in the system with orbital periods of three years and more.

There’s a possibility that the Norse moons Ymir and Skathi might be the reason for the dark materials on Iapetus. Remember that Iapetus is a two-colored moon with contrasting bright and dark areas. Those dark areas are coated by dark material from the outer moons. Materials from Ymir and Skathi may have also reached the surface of the spongy moon, Hyperion. 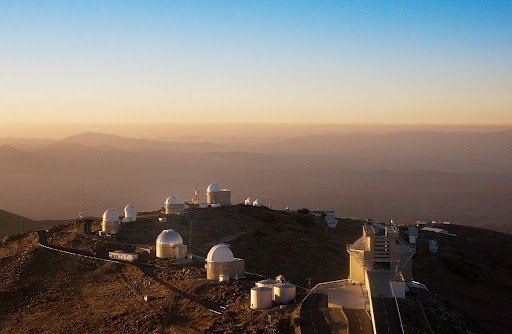 The same team discovered many other moons of Saturn in different ground-based observatories around different countries. As for Ymir, they uncovered it in La Silla Observatory. This facility of the European Southern Observatory is located in the Atacama Desert in Chile.

Ymir was discovered at the same time with other irregular moons of Saturn. These moons are Paaliaq and Kiviuq. Unlike Ymir that is in the Norse group, these two are part of the Inuit group.

The first-ever discovered irregular moon of Saturn was Phoebe in 1899. The next discovery of irregular satellites in the system only happened in 2000 when Ymir, Paaliaq, and Kiviuq were uncovered. The gap was more than a century apart!

Below is the discovery image of this moon. 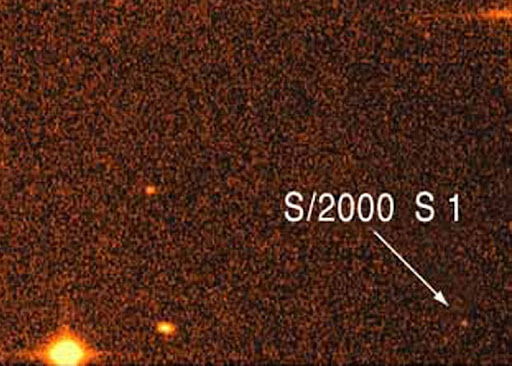 Ymir moon orbits Saturn at an average distance of 23,140,400 km. Its mean orbit velocity is 4,473.9 km/h. The journey of this moon around the ringed planet is a long one that takes 1,315 Earth days. That is more than three and a half years!

This orbit is more oval than it is circular since it has an eccentricity of 0.3337. Another characteristic of this orbit that made Ymir an irregular moon is its orbital inclination. It is inclined 173.125° to the equatorial plane of Saturn.

Ymir is about 18 km or 11 miles across. Though it is many times smaller than regular moons, it is the largest when compared to other outer moons with similar orbital periods. The mass of this object is 4,945,605,829,220,740 kg. Its equatorial circumference measures 56.5 km.

Ymir is not in synchronous rotation with Saturn. Its rotational period is much shorter than its orbital period. It only takes this moon 11.92 hours to rotate on its axis. If we expand that out, it is about 11 hours 55 minutes, and 20 seconds.

We cannot easily see the Ymir moon on Earth as its apparent magnitude is 21.7. It is way too dim considering that objects around the 6th magnitude are the maximum that we can see with the naked eye.

Astronomers were able to compute other characteristics of Ymir based on available data. Its volume is calculated to be 3,054 km3. The moon’s surface area is 1,017.88 km2 with a surface gravity of 0.004 m/s2.

Ymir – Behind the Name

The natural satellite Ymir was given its name in August 2003. Since it’s one of the Norse mons, its name was inspired by a character in Norse mythology. 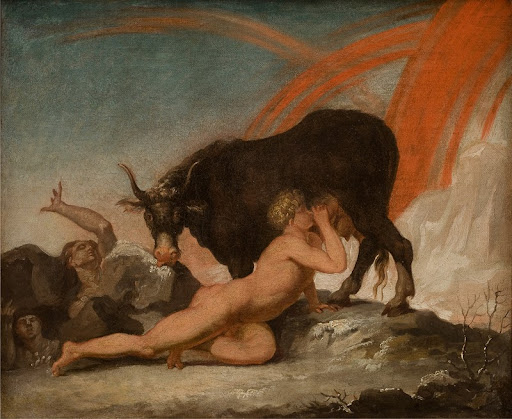 Ymir is an important character in Norse mythology. He was considered the first jötunn (plural: jötnar) or frost giant. Born from venom dripping from the icy river Élivágars, his birth is just as extraordinary as his tales. He was not a god but it was believed that all the jötnar originated from him.

The primeval cow named Auðumbla also came from the drip of the Élivágars. This cow sustained and fed Ymir with its milk. Meanwhile, this cow fed by licking the icy rime-stones. As it licked, Auðumbla slowly uncovered a man from the ice. After three days, the man was fully revealed and he became known as Búri. 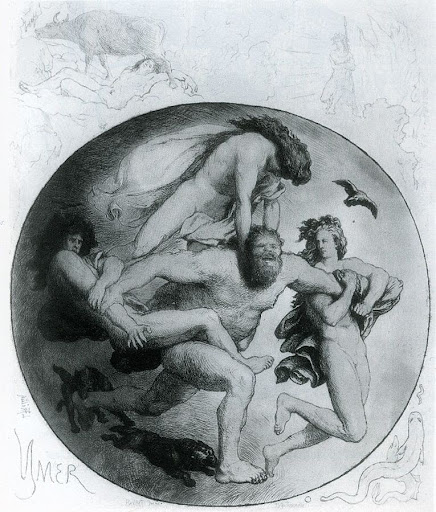 Búri was the father of all gods. His son, Borr, fathered Odin, Vili, and Vé. The three sons killed Ymir and from him came everything that we know of the world. The earth was created from his flesh while his blood became the sea. His hair became the trees and plants while his skull became the heaven. His brain became the clouds and his eyebrows became the Midgard. The Midgard is the “middle enclosure,” the Earth where humans live.