There are two types of moons in our solar system: regular, like Earth’s moon, and irregular like the Siarnaq moon.

A regular moon has a prograde orbit, it moves in the same direction as its parent planet. This orbit is nearly circular and has a low inclination. Our own Moon is an example of this.

Most of the famous satellites that we know are regular moons. It includes the five biggest moons in the solar system:

Some of the irregular moons have prograde orbits. However, a lot of them also have retrograde orbits. That means they move in the opposite direction as their host planet. Their orbits are elongated and highly inclined too.

Another thing that separates regular and irregular moons is their origin. It is believed that the regular moons formed in the system they are in. On the other hand, the irregular moons are thought to be captured objects that originated somewhere else.

Irregular moons have been found in the systems of the large planets Jupiter, Saturn, Uranus, and Neptune.

The largest moon of Neptune, Triton, is an irregular satellite. It is the only major moon in the whole solar system that moves in a retrograde motion. 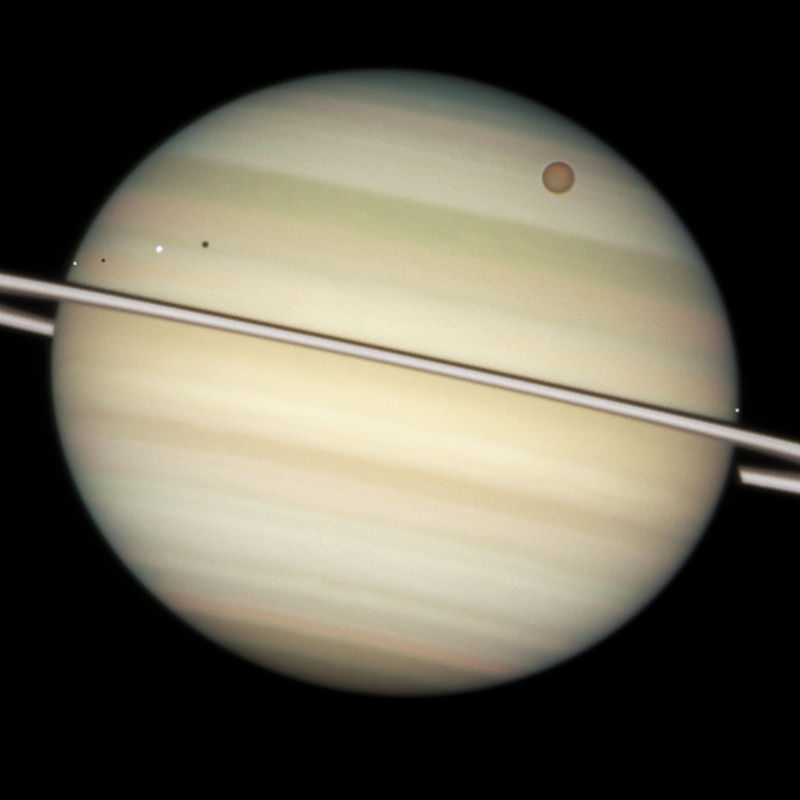 So far, Saturn has 82 known natural satellites. Twenty-four of them are regular moons while the other 58 are irregular moons.

The irregular moons of Saturn are grouped into three. They are the Inuit group, the Gallic group, and the Norse / Phoebe group.

Moons of the Inuit and Gallic group are in prograde motion. The biggest among the three is the Norse group. It has 46 member moons that have retrograde orbits. Saturn’s largest irregular moon, Phoebe, belongs in this group.

The Inuit moons are a group of irregular satellites of Saturn. These moons have prograde orbits like regular moons. However, what makes them irregular is their relatively high eccentricity and inclination.

Remember that when talking about eccentricity, we use the numbers 0 to 1. Zero means the orbit is circular. And the more the number gets closer to 1, the more elongated the orbit is. The Inuit moons have eccentricities between 0.15 to 0.48. Their orbital inclinations from the plane of Saturn are around 40 to 50 degrees.

The Inuit moons are located very far from the planet, around the distance of 11 to 18 million km or 7 to 11 million miles. They are dark and reddish bodies with an assumed albedo around 0.06.

Five Inuit moons were already named and confirmed while two others are still using their temporary designation. These moons are: 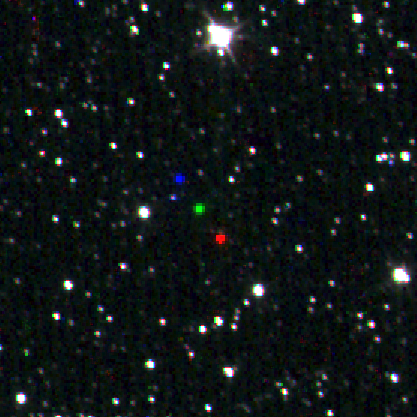 Siarnaq is an irregular moon of Saturn. Another designation for it is Saturn XXIX. It is one of the Inuit moons and is the largest member of that group. It had a ground-based discovery in 2000.

Before official naming, the moon was designated S/2000 S 3. This temporary designation indicates that it was the third new moon of Saturn discovered in 2000. The International Astronomical Union (IAU) confirmed its discovery on October 25, 2000.

Its permanent name is inspired by a goddess in Inuit mythology. The goddess, Siarnaq, is more commonly known as Sedna. We use the words Siarnaupian or Siarnaqian for the adjectival form of this name.

The Siarnaq moon has a prograde orbit. It has a light red color that is the same as other Inuit moons. And though it was already a confirmed satellite, there is still so much that we do not know about this moon.

Siarnaq was discovered with many other moons. Their discovery helped make Saturn the planet with the most known moons in the solar system.

How Did the Moon Siarnaq Form?

Siarnaq did not form in the Saturnian system like the regular moons. Instead, it is an object that was later on captured by the gravity of the ringed planet. The other irregular moons in the system are also believed to be captured objects.

The color of Siarnaq is very much like the other moons in the Inuit group, Kiviuq and Paaliaq. This common characteristic can tell us that the three may be fragments from the same body that broke up a long time ago.

The moon Siarnaq was discovered on September 23, 2000. A group of astronomers made the discovery at the Mauna Kea Observatories (MKO) using the Canada-France-Hawaii reflector. 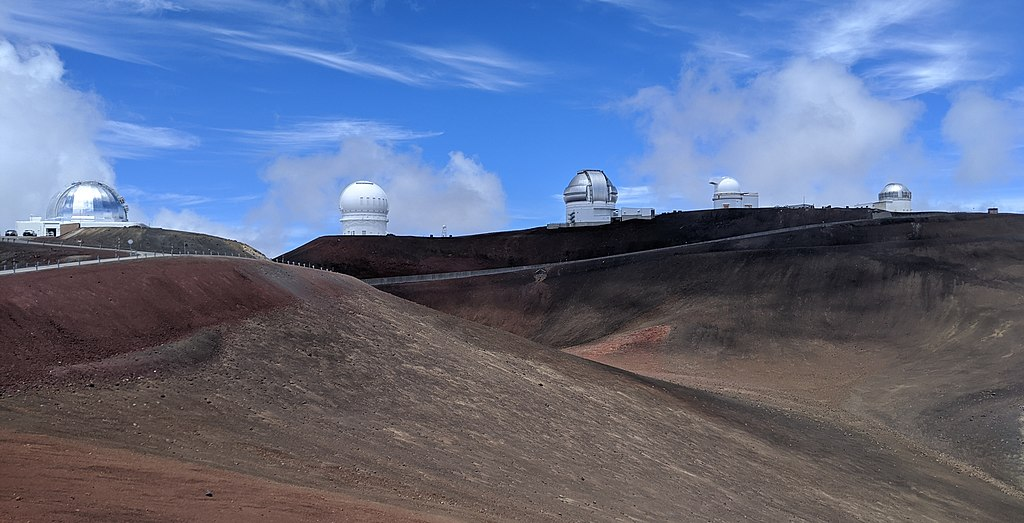 The MKO research facilities are located on the Big Island of Hawaii. Observing the skies is ideal at the summit of Mauna Kea because it is free from light pollution. The location also has low humidity and, since it is at the summit, it is highly elevated.

Siarnaq’s discovery helped establish a campaign that aims to find and know more about the irregular moons of Saturn. The group that discovered it made more studies about the Saturnian system. They used different ground-based telescopes to uncover more distant and irregular satellites of the ringed planet.

Many other irregular moons were discovered at the same time as Siarnaq. These natural satellites are:

Siarnaq orbits Saturn at a distance of about 18 million km (11 million miles). It takes about 896 days for this moon to complete a trip around the host planet. That is approximately 2.45 Earth years!

The orbit of Siarnaq is more oval than it is circular, just like the other irregular moons. Its eccentricity is around 0.4052. It is also highly inclined to the ecliptic at 43.80073°.

Astronomers found out that this moon is involved in a secular resonance with the planet Saturn. This relationship can help determine the origin of Siarnaq and how it was captured by the parent planet.

Siarnaq is roughly 40 km across according to data from the Wide-field Infrared Survey Explorer (WISE). Though it is small compared to the inner and regular Saturnian moons, Siarnaq is the largest body in the Inuit group.

This natural satellite is about 87 times smaller than our planet’s Moon. It is even much smaller than Titan by about 129 times. Siarnaq, however, is 66.7 times larger than the moon Aegaeon. This 0.6km-diameter moon is the smallest known satellite in the system.

While Siarnaq has a long orbital period, its rotational period is relatively short. It only takes about 10 hours for this irregular moon to complete a full rotation. That said, it has the shortest rotation period among Saturn’s irregular moons with prograde orbits.

The Cassini spacecraft revealed that Siarnaq has a sideways axial tilt. This means that seasons on this moon are most likely similar to the gas giant Uranus. That is, aside from being extreme, the seasons also last long.

Siarnaq is a dark body just like the other distant irregular moons of Saturn. Its albedo or reflectivity is around 0.050 ± 0.017, closely similar to the moon Phoebe.

The moon Phoebe is a very dark body. With an albedo of 0.06, it reflects only 6% of the sunlight that reaches its surface and absorbs the rest.

We can compare this dark body to that of carbon black material.

Siarnaq has an apparent magnitude of 20, too low to be seen with the naked eye. Despite that, it is still brighter than the moon Tarvos which was discovered alongside it.

Because it is very distant and small, no flyby has been performed on this moon yet. We have not seen it up close but we know that it has a reddish color.

The Cassini probe observed Siarnaq’s rotation and light curve. Data from the orbiter indicate that the moon probably has a triangular shape.

Siarnaq is a sea goddess in Inuit mythology. She is believed to be the bearer of all life forms in the sea. Siarnaq guards them all by living at the bottom of the ocean. She is an angry goddess. When provoked, she will not give any harvest to the sea hunters.

The goddess is also known by the other names Sedna and Nuliajuk.

The Tale of Siarnaq

Siarnaq (or Sedna) was a giantess. She was the daughter of Anguta, the creator god.

One day, Siarnaq became so hungry that she attacked her parents. Anguta was angry about this and punished his daughter for what she did. He brought her to the sea and threw her out of his kayak.

Siarnaq tried to cling to the kayak but her father chopped her finger. She then sank to the bottom of the ocean, in the underworld, where she would rule. Her chopped fingers became the big sea creatures.

There are many other versions of the story. One is that Siarnaq was a maiden who was tricked to marry a bird spirit. Upon knowing the man’s true identity, her father tried to rescue her on his kayak.

The bird-man became angry and caused a big storm on them. Siarnaq’s father threw her into the sea thinking that it would calm the storm. Siarnaq held on to the side of the kayak. She tried to cling until her hands froze. Her fingers fell off and became the whales, seals, and walruses.