The Norse group, which includes the Phoebe moon, is one of the three groups of irregular satellites of Saturn. It is the exception in the Norse group of moons, in that its name comes from Greek mythology rather than Norse. The other two are the Inuit and Gallic groups. So how are these three different?

The irregular moons of Saturn are grouped based on their orbital characteristics. Only moons in the Norse group have retrograde orbits.

The Norse group is also called the Phoebe group since the largest irregular moon Phoebe belongs here. This group is the most populous, having 46 outer moons moving in the opposite direction as Saturn. Because of their large number, subgroups can be formed within this larger group.

Twenty-one of the 46 Norse moons were already given permanent names while the other 25 still await naming. Some of those unnamed satellites are considered lost since they are not seen again after their discovery. 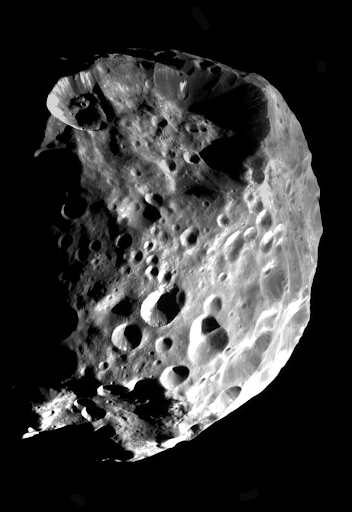 Behind the name
Phoíbē (A Titan in Greek mythology)

Phoebe is the largest irregular satellite of Saturn. It is also called Saturn IX. Discovered in 1898, this moon was one of the earliest confirmed members of the Saturnian system.

Phoebe is one of the Norse moons but it was named after a Titaness in Greek mythology. It was discovered much earlier than the others so it followed the traditional naming system of Saturn’s moons. Its features were also named from the same inspiration. We use the adjective Phoebean for this moon.

Being one of the Norse moons, Phoebe moves in a retrograde orbit. It orbits around the planet in a journey that takes more than one Earth year. This moon is one of the two major satellites in the Saturn system with orbits that are greatly inclined to the equatorial plane of Saturn. The other one is the two-toned moon Iapetus.

For a long time, it was believed that Phoebe was the outermost moon of Saturn. This changed when smaller satellites were discovered in 2000. And until now, more and more of them are still getting discovered.

Though it is dark and distant, Phoebe has a grand structure along its orbit—a ring! This ring is very large that it dwarfs the inner rings of Saturn.

How Did the Moon Phoebe Form?

Phoebe did not form in the Saturn system, unlike the regular moons. Instead, it likely originated in the Kuiper belt, the circumstellar disc that surrounds the outer areas of the solar system. Saturn’s gravity captured it where it stays now.

Phoebe might be a Centaur, just like Chiron and Pholus. Centaurs usually have the features of both comets and asteroids. These planetoids orbit the Sun in the area between the gas giants Jupiter and Neptune.

Centaurs are interesting because they are thought to be some of the oldest objects out there, probably around the time when the solar system formed. Since they are “leftovers” of the said formation, they might hold some clue about how everything started.

Astronomers believed that Phoebe formed three million years after the solar system’s formation. At this time, there was still much radioactive material that might have melted it into a more spherical shape—which it once was. It lost its spherical shape because of intense impacts that battered its surface.

Other Norse moons of Saturn are probably debris from powerful impacts that struck the surface of Phoebe. It is most likely the case since those moons are very small, less than 10 km across. 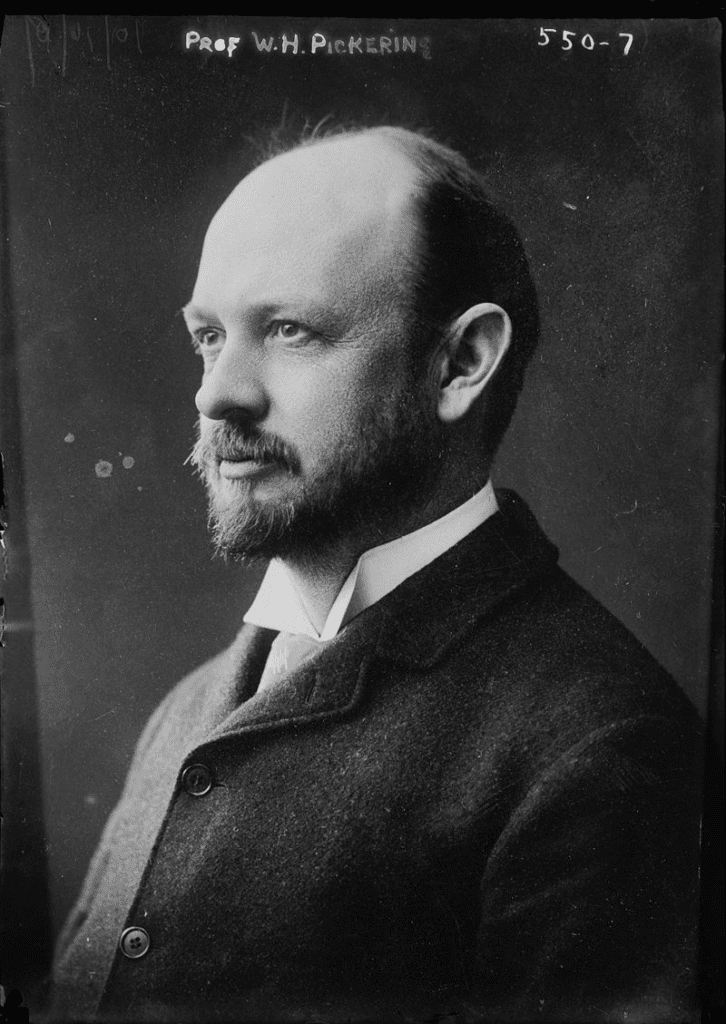 Saturn’s moon Phoebe was discovered photographically. William Henry Pickering discovered it from photographic plates that were taken by astronomer DeLisle Stewart. Stewart started taking the said photographs on August 16, 1898. He was at the Boyden Observatory near Arequipa in Peru at the time.

The surface of the moon was seen up close when the Cassini spacecraft arrived in the Saturnian system. The first flyby in the system was performed for this moon in 2004. After that, when Cassini orbited the ringed planet, it never went past the outer moon Iapetus again.

The dark moon Phoebe was the first moon ever discovered from photographs.

The retrograde moon Phoebe is very far from Saturn. Its average orbit distance is about 13 million km (8 million miles). With that, it is four times as distant to the planet as Iapetus, its nearest moon neighbor. It takes Phoebe more than 550 Earth days to make a complete trip around the ringed planet. That is roughly 18 months!

Phoebe ranks as the second-largest irregular moon in the entire solar system. The largest of them all is Triton, found in the Neptunian system.

Phoebe’s composition is believed to be at least 50% rock. It differs from the regular moons of Saturn that are mostly made up of ice, with a rock composition that is only about 35% more or less. 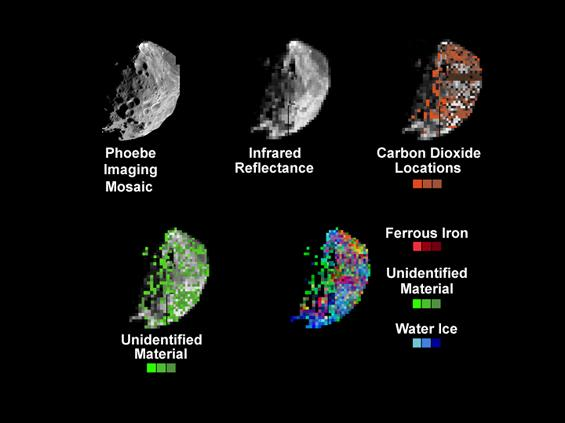 Aside from rock, this moon is made up of ice that is blanketed by a layer of dark material. It was also discovered that carbon dioxide is present on its surface. This composition is often likened to that of Pluto and the moon Triton of Neptune.

Cassini images revealed the distribution of different materials on Phoebe. The materials identified are water-ice, carbon dioxide, and ferric iron. The nature of the fourth material was unknown.

It takes about 9 hours for Phoebe to rotate on its axis. This rotational axis is tilted 152.14° to the plane of its orbit. Since it is not in synchronous rotation with Saturn, its rotation and orbital period are so different. It is also not tidally locked unlike most of the regular moons.

The albedo tells us about an astronomical body’s reflectivity. We use the values 0 to 1. Zero tells us that an object is very dark and 1 means that it is very bright as it reflects all radiation that reaches its surface. As with Phoebe, this moon has an albedo of 0.06, telling us that it is a very dark body.

The temperature on Phoebe is approximately 73 K. There is a large contrast of temperature on this moon, throughout the day, depending on location. It is much colder in high-latitude areas.

The highest temperature in the equatorial area reaches 112 K in the afternoon. It drastically falls to about 78 K before dawn. 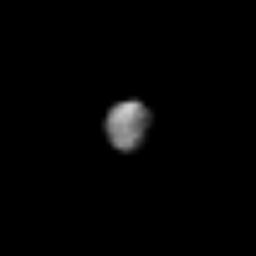 The first look we had of Phoebe was taken by Voyager 2 in 1981. Considering that it was a very long time ago, the technology was not yet as advanced as it is today. Also, it was taken by the spacecraft at a distance of about 2.2 million kilometers or roughly 1.4 million miles!

The greatest shots taken of the spherical moon were captured on June 11, 2004 thanks to the Cassini mission. The vague images are now replaced with a closer and more detailed view of the moon. Cassini was only 2,068 kilometers (1,285 miles) away from Phoebe when it studied the moon. 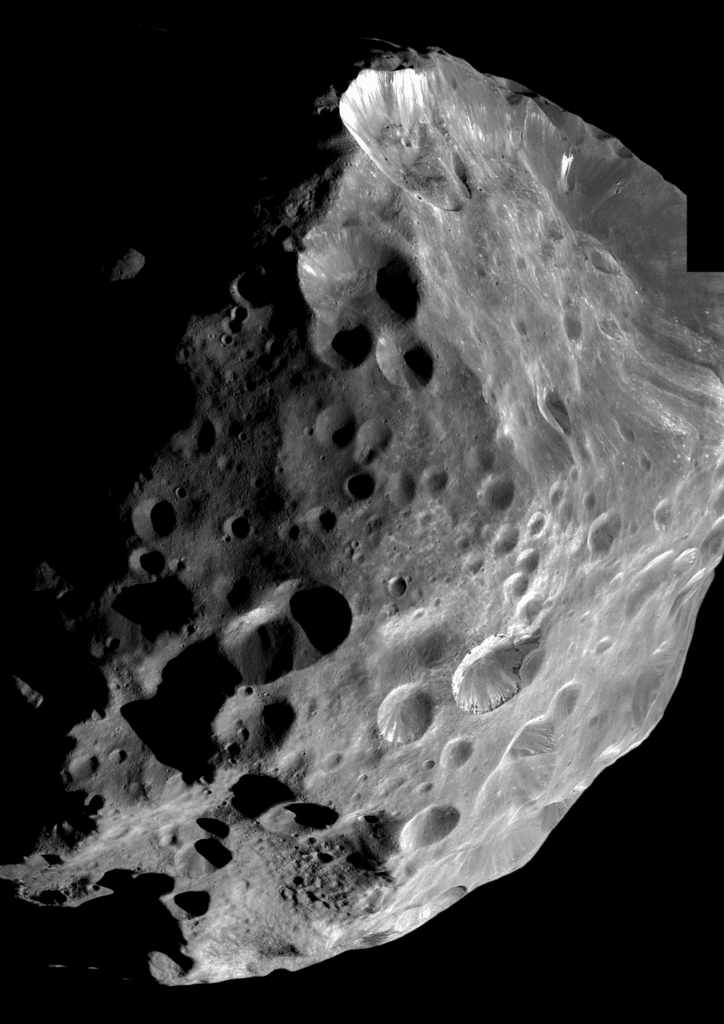 Phoebe is heavily cratered. It has a very dark surface that reflects only 6% of the light that reaches it, absorbing the rest. Because of that, there is a possibility that Phoebe might be an asteroid that was trapped by Saturn’s gravitational pull.

If Phoebe is really a captured asteroid, it might belong to the C-type or carbonaceous asteroids. Members of this class have very low reflectivity. Findings from Cassini, however, suggest that it might not be the case. This moon might be more of a primordial object from the outer solar system. Its composition is more similar to Kuiper belt objects than those in the asteroid belt. 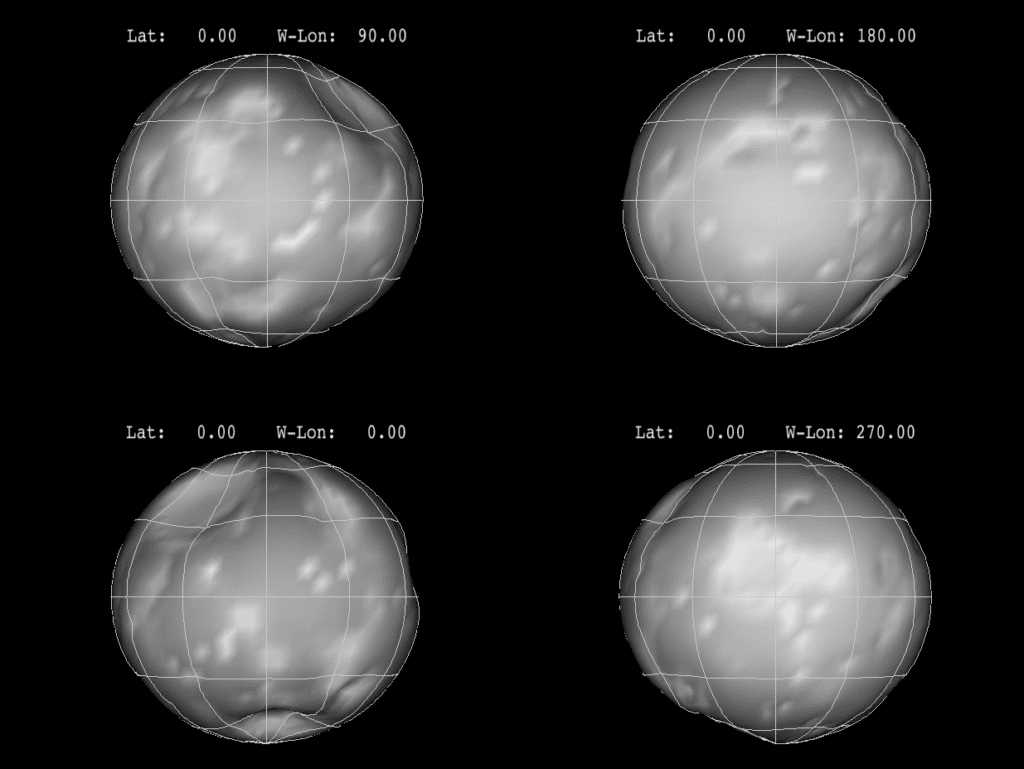 It looks like Phoebe once had a spherical shape as derived from the Cassini spacecraft imaging. Most likely, it lost its roundedness because of the intense impacts that happened on its surface. Some of its craters are small while others are also very large.

The larger Phoebean craters can measure up to 80 km in diameter, with depths around 16 km. These craters have differences in terms of brightness, indicating that there is ice under the dark material that covers its surface. 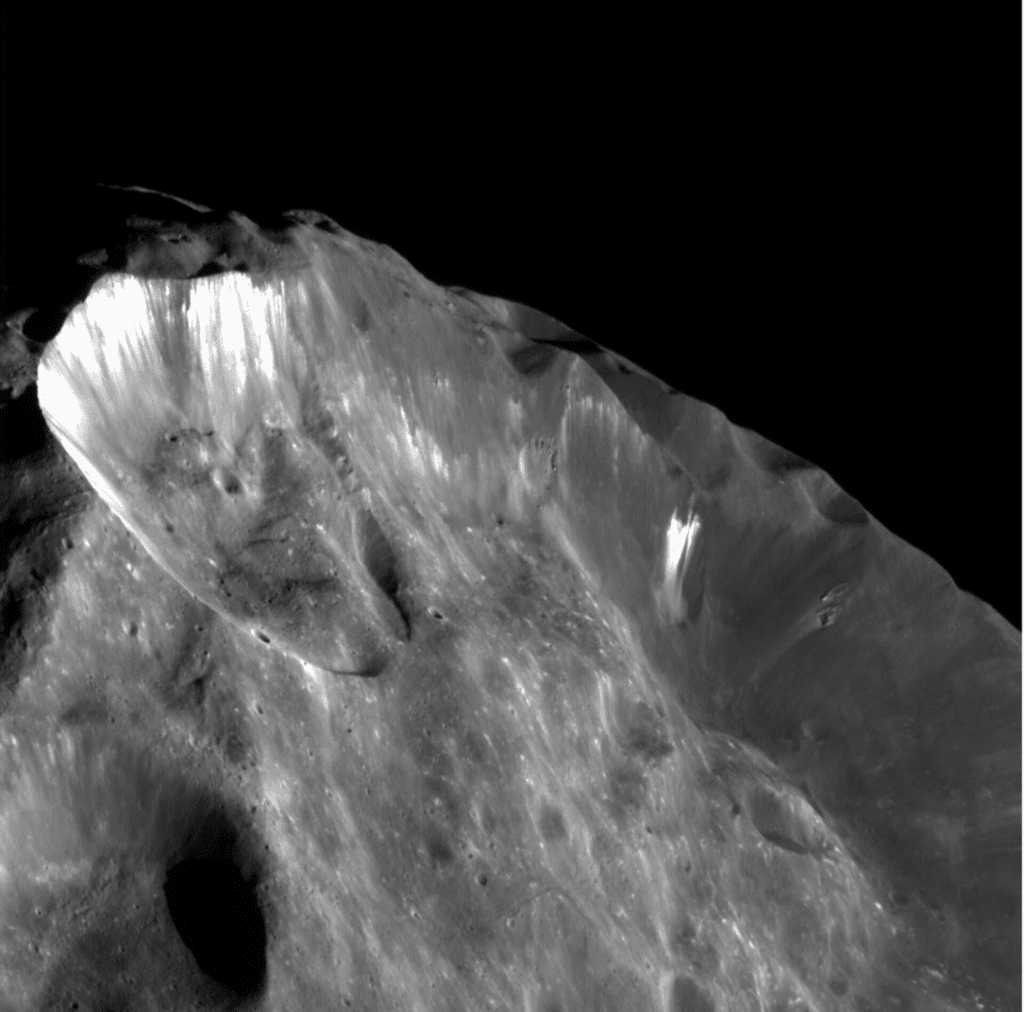 Aside from the craters, grooves were also seen on Phoebe’s surface. Interestingly, these features are famously seen on one of the two Martian moons, Phobos. 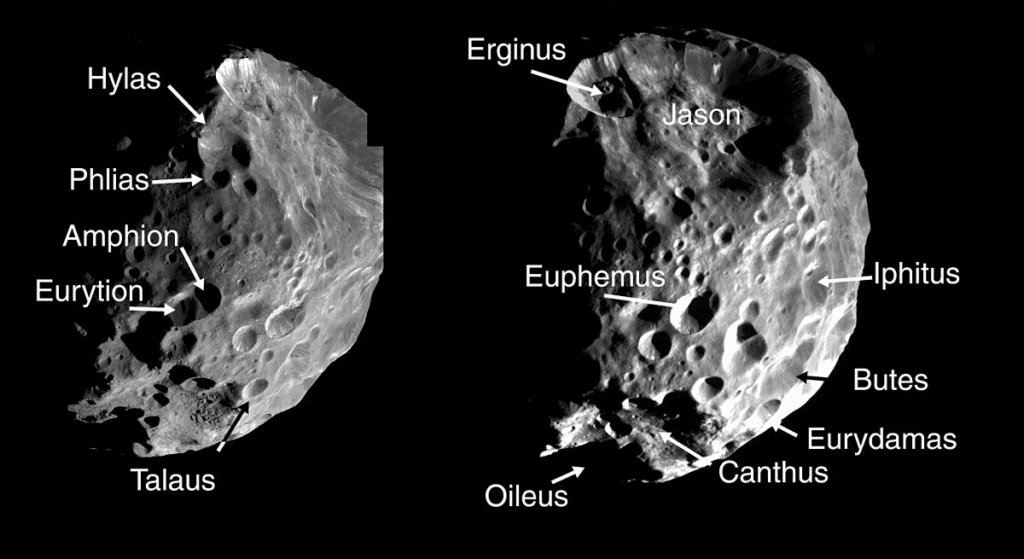 There are two types of surface features on Phoebe: craters and regios.

There’s only one regio on Phoebe. It is called Leto Regio, after the name of Phoebe’s daughter. The most prominent features of this moon are its craters. They were also named after characters from Greek mythology, specifically the story of Jason and the Argonauts. Twenty-four of them were named in 2005.

Craters of the Moon Phoebe 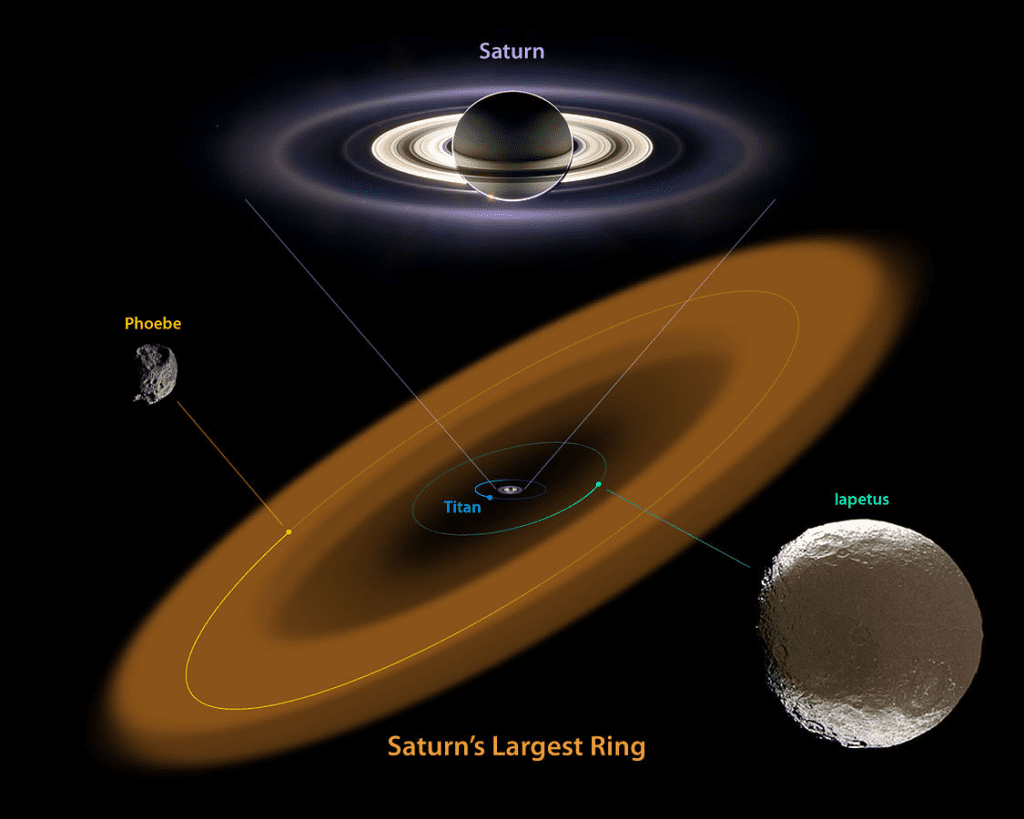 The Phoebe ring is Saturn’s largest ring. This tenuous and dusty structure was discovered using the retired infrared Spitzer Space Telescope of NASA. Before that, there were only seven known rings around the planet. Arranged in increasing distance, they are rings D, C, B, A, F, G, and E.

The existence of a ring in the orbit of Phoebe was proposed as early as the 1970s by Steven Soter. It was discovered in October 2009 by Anne J. Verbiscer, Michael F. Skrutskie, and Douglas P. Hamilton.

The ring is tilted just like its moon, Phoebe. It is skewed 27° from the host planet’s equatorial plane as well as the other rings. The Phoebe ring measures about 128 to 207 times Saturn’s radius. It is also very thick, roughly 40 times the radius of Saturn! 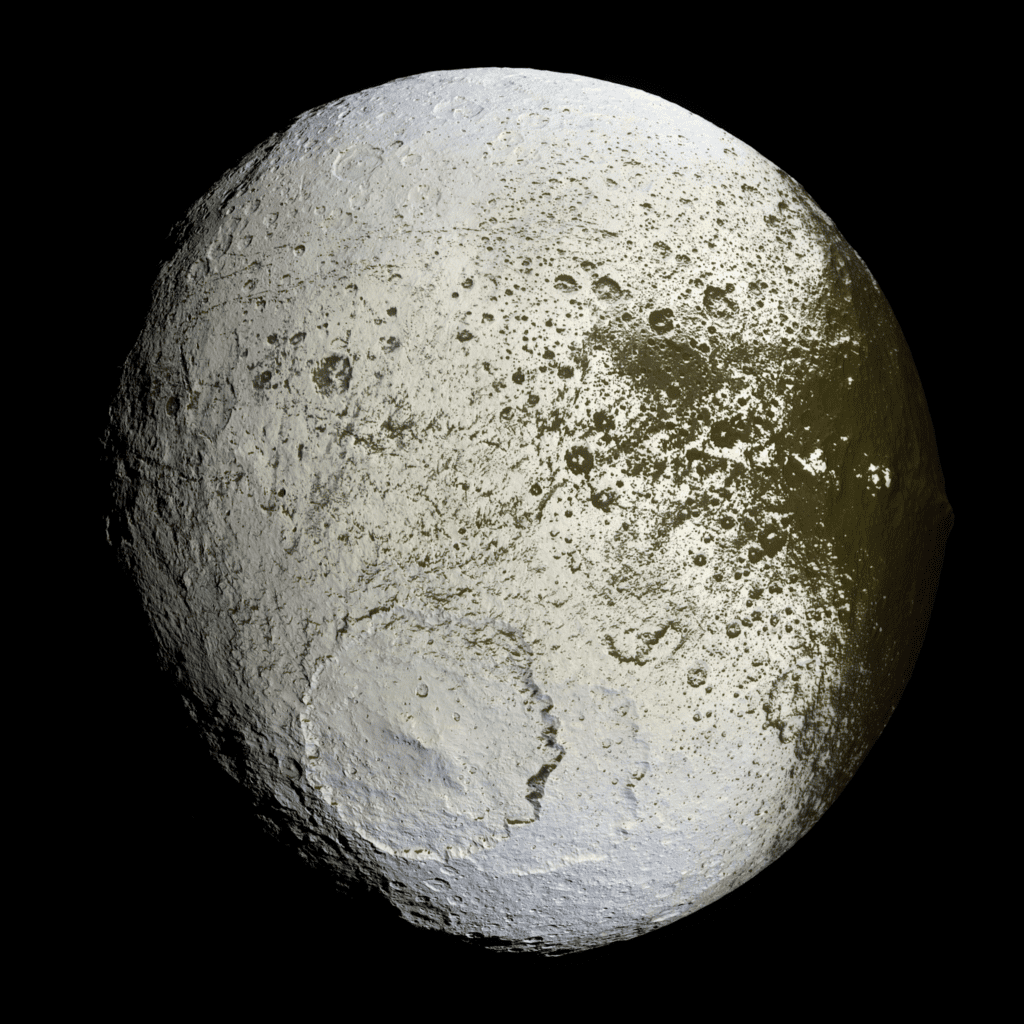 It is believed that the moon Phoebe is itself the origin of the dusty disk in its orbit. The particles that make up this moon were ejected from the surface of the moon because of micrometeoroids and larger impacts.

The particles of the ring are thought to be also in retrograde motion, just like the moon Phoebe.

The Ring’s Effect on Iapetus

We know that the moon Iapetus is the closest major moon neighbor of Phoebe. The most striking characteristic of this body is the contrasting colors of its surface.

One theory that aims to explain the two-colored tone of Iapetus involves material from the Phoebe ring. Particles from the ring possibly migrated inward to the Saturnian system as they orbit in opposite directions. And as they move, particles from Phoebe hits the leading hemisphere of Iapetus, making it much darker than the other areas. 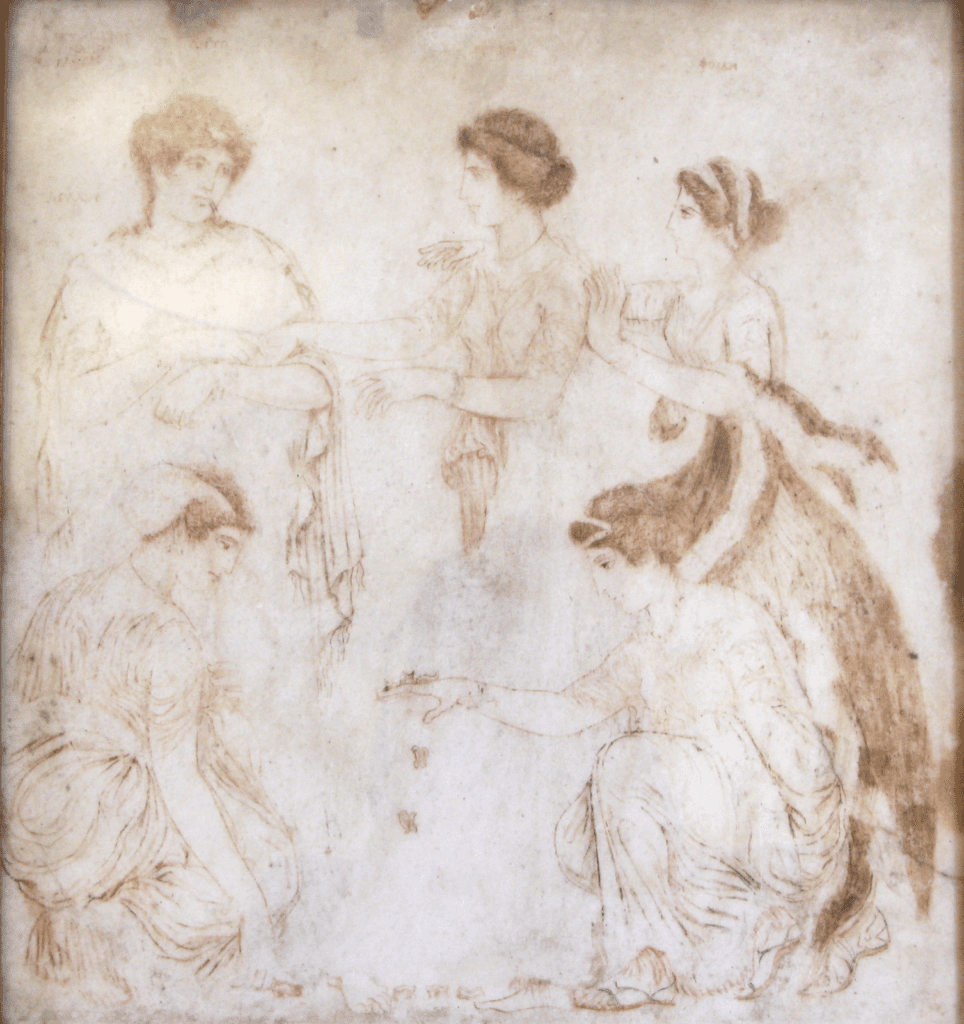 Phoebe is one of the 12 Titans in Greek mythology. These Titans are:

The Titans are children of the primordial gods Uranus (Sky) and Gaia (Earth). Though the moon named after Phoebe is dark, the Titaness’s name actually denotes “brightness” or “shining.”

Phoebe had two daughters, Leto and Asteria. Her consort is no other than her brother Coeus. Her daughter Leto bore children with Zeus. These children are Apollo and Artemis. Aside from the twins, Phoebe also has another grandchild from Asteria, the goddess Hecate.