A web of interplays among Saturn’s moons makes the system a party of its own. This time, let us get into the rhythm of the dance that the co-orbital moon – the Janus moon makes.

What is a Co-Orbital Moon?

Each of Saturn’s moons has its own defining characteristics, may it be in their appearance, composition, or orbit. The moons are grouped accordingly based on their orbital characteristics. Some of its most promising members are its largest moons Titan and Enceladus. Their potential habitability was the subject of Cassini’s many flyby missions.

Aside from the moons that hold promise for life, another two of Saturn’s natural satellites have an extraordinary relationship. They are classified as co-orbitals. A co-orbital moon is a natural satellite that shares orbits with another moon. There is only one pair of this in the solar system— Janus and Epimetheus.

Janus and Epimetheus are called co-orbital moons because they share and switch orbital positions. This exchange happens every four years when the outer moon moves closer to Saturn and the inner one moves to the outer orbit, farther from the planet.

The two moons’ orbits are so close but, luckily, they never collide because of their gravitational influence on each other. They constantly play a tug of war which results in them swapping places.

Other moons in the Saturn system also share orbits but they never switch. They are called Trojan moons. Telesto and Calypso share an orbit with Tethys while Dione shares its orbit with Helene and Polydeuces. 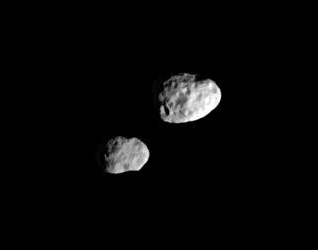 There is only a 50-km difference between the orbits that Janus and Epimetheus follow around Saturn. Being closer to the parent planet, the moon in the inner orbit travels faster than the one on the outer orbit and completes a trip on its orbit faster.

Their gravitational effect on each other becomes stronger as they become closer. Still, they will never crash because the closest they ever come is about 15,000 kilometers. The inner moon tugs on the outer moon, and vice versa.

The attraction of the two satellites increases the momentum of the inner moon. It means that its distance from the planet increases as well as its orbital period (going to the outer orbit). On the other hand, the outer moon losses the same amount of momentum. Its orbital period and distance from Saturn decreases (going to the inner orbit). This way, the two bodies effectively swap orbits.

The swap has a lesser impact on Janus’s orbit than on Epimetheus because the former is four times more massive. The Cassini spacecraft observed this event in January 2006. Three swaps after that, another switch involving the two is expected in 2022. 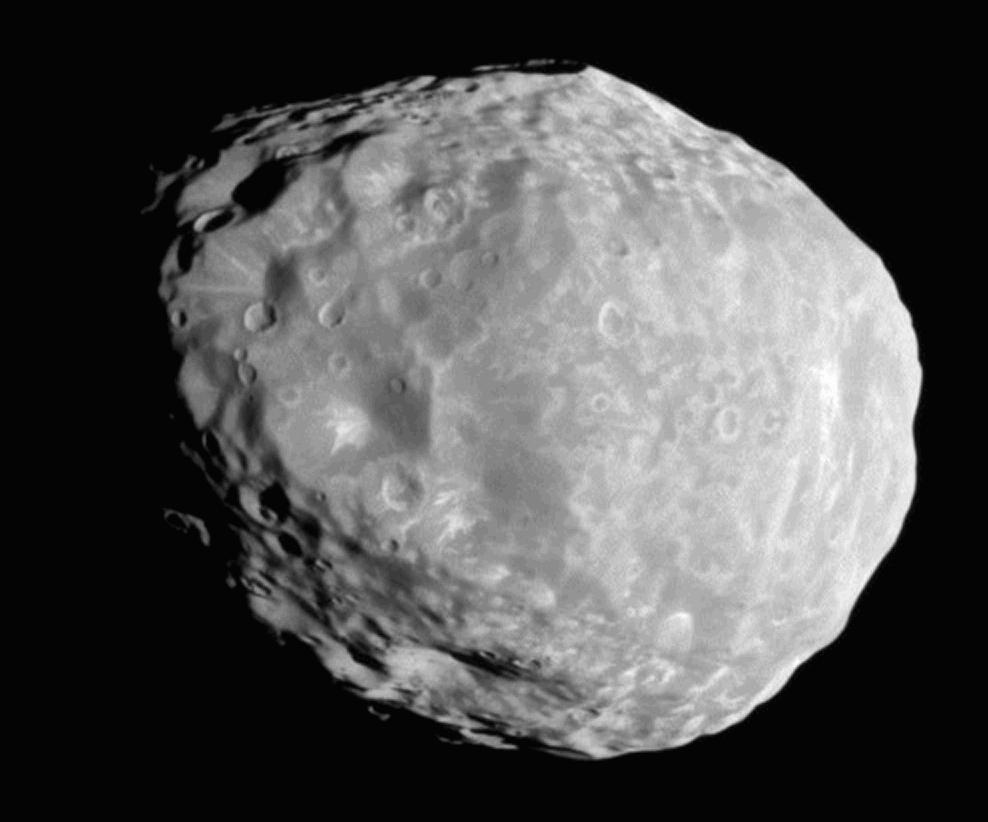 Janus is a natural satellite of Saturn discovered in 1966. Another designation for this inner moon is Saturn X. It is in the area between Saturn’s F ring and G ring. But it is never lonely because it occupies that gap with another moon, Epimetheus.

Janus and Epimetheus are involved in an orbital dance. The two are called co-orbital moons. They swap orbits every four years, a phenomenon like no other in the solar system. Because of the extraordinary effect they have on each other, the two moons are believed to have originated from a single moon. This satellite of origin probably broke up when the Saturnian system was still young.

The moon Janus got its name from the god of time and doors in Roman mythology. He is said to be the god of beginnings and endings. Since he holds the key to the past and the present, he is portrayed as someone with two faces to represent duality.

Before its official discovery, Janus was seen in a photograph taken by Jean Texereau on October 29. Texereau, however, did not notice it. It was on the 15th of December 1966 that the small moon was seen in its full glory.

French astronomer Audouin Charles Dollfus discovered Janus. He was known as a great visual observer in the field. He was able to observe Janus because, at the time of discovery, the rings of Saturn were positioned almost edge-on from an observer’s perspective here on Earth. It was temporarily designated S/1966 S 2.

Janus has always been tied with its co-orbital partner, Epimetheus. It was believed that Dollfus may have also observed Epimetheus when he discovered Janus. Three days after the discovery of Janus, Richard Walker noticed yet another object in its orbit. But the thing is that it was not the same body that Dollfus discovered. The position and data did not match with Janus. The mystery of that body was shed to light more than a decade later.

In October 1978, John W. Fountain and Stephen M. Larson were able to come up with an explanation which confirmed that Dollfus and Walker indeed observed two different objects. They believed that the objects must have a unique relationship and that they might even share the same orbit. Their assumption about the moons’ orbital configuration was confirmed in 1980 by Voyager 1. A year later, its twin probe, Voyager 2 was able to take a photo of Janus.

Janus is believed to be largely made up of water ice because of its high albedo or reflectivity. Since its density is lower than water, it must be a porous rubble pile whose pieces are joined by gravity.

Janus orbits Saturn at a distance of 151,460 kilometers and takes 17 hours to complete one trip around the ringed planet. This oblong moon is tidally locked to Saturn just like Epimetheus, so only one side of it faces Saturn while the other remains in darkness. 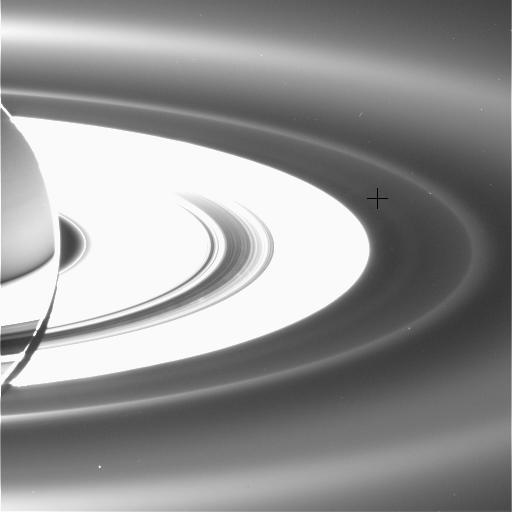 Janus and Epimetheus play important roles in Saturn’s rings, specifically in keeping the shape of the A ring. They act as shepherd moons by keeping the outer edge of this ring sharp. This role was previously credited to the moon Atlas which resides just outside the A ring. It was later discovered that a 7:6 orbital resonance between the farther pair, Janus and Epimetheus, keeps the ring in check.

As released in a journal called Icarus, Cassini observed an arc on Saturn’s A ring in 2013. This arc is believed to be caused by a baby moon that is yet to be revealed. They nicknamed it Peggy. The moon Janus likely contributed to the formation of this object since its plays a shepherding role on the outer edge of the A ring.

Janus is irregularly shaped. It looks like a space potato just like the other inner moons of Saturn. Mysterious dark spots were observed on close-up shots of its surface. Other than these spots, craters and grooves are also very noticeable. Scientists found out that its grooves are comparable to that of Phobos, one of the two moons of Mars.

The moon’s surface seems more ancient than Prometheus yet younger than the other ring shepherd Pandora. Janus contains craters that are even larger than 30 kilometers. Some of the most prominent ones were given names after the story of Castor and Pollux. The four of them are Castor, Idas, Phoebe (Phoibe), and Lynceus. A lot of Janus’s craters have soft edges because they are covered with dust.

Dust particles from the surface of Janus and Epimetheus were expelled because of meteoroid impacts. As a result, the co-orbital moons trail particles that form a faint ring coincident with their orbits. This diffuse structure is called the Janus/Epimetheus Ring.

The new ring was revealed by Cassini in 2006 when the probe was about 2.2 million kilometers away from Saturn. It was taken using Cassini’s wide-angle camera with a scale of about 250 kilometers per pixel. The faint ring can be seen with the cross (+) mark on the image below from NASA/JPL/Space Science Institute.

Before it was given its official name, Janus was known as S/1966 S 2 after Audouin Dollfus discovered it. Even after that, the moon was seen lurking around the observational corners several times.

On September 1, 1979, the space probe Pioneer 11 was able to detect the moon’s shadow. Thinking that it was an undiscovered object, it was given the provisional designation S/1979 S 2.

Two different sightings of Janus in 1980 gave it two different temporary names. It was S/1980 S 1 when Dan Pascu observed it on February 19, 1980. Another group of observers saw it four days after, giving it the designation S/1980 S 2.

The governing body International Astronomical Union (IAU) officially gave the name Janus to this moon in 1983. At the same time, the other moon that was discovered in its orbit was awarded the name Epimetheus. 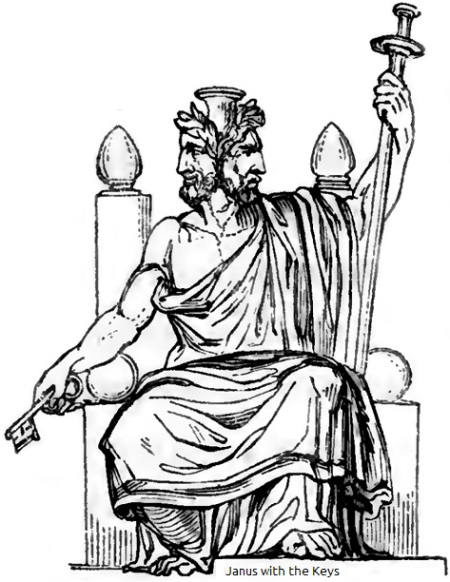 Janus is a two-faced god in Roman mythology and religion. The name means “doorway” or “’arched passage” in Latin. He is the god of transitions, of beginnings and endings, of time, and passages. Much of Roman mythology was greatly influenced by the Greeks. However, Janus is the only Roman figure with no Greek counterpart.

Janus plays a lot of roles in ancient Roman religion and is likely their most important god. People say his name first of all in their prayers. He was worshipped during planting season and in times of harvest, in marriages and deaths, and everything that signifies beginnings and endings. As someone who can see the past and the future, the god was also associated with omens.

Seeing that he presides the beginning of everything, it was believed that the month of January was named after Janus. But actually, the first month of the year was named after the chief goddess Juno.

One of many stories about Janus is that he was the first ruler of Latium together with Camese (or Camesus). Janus rescued his brother Saturn when Jupiter banished him from the heavens.

Another story related to Janus is the kidnapping of the Sabine women carried out by the male followers of Romulus, the founder of Rome. The king of the Sabines, Titus Tatius, wanted to strike Rome and have their revenge. Janus intervened by sending jets of hot water and ash to the attackers and thus saved Rome.

The Temple of Janus (Ianus geminus) was built in honor of the two-faced god. Its doors were kept open during wartime and they were closed in times of peace.