What is a Co-Orbital Moon?

No two moons of Saturn are the same. With sizes ranging from the size of the planet Mercury to something just as big as a stadium, their differences make the system an interesting lot. But no matter how big their dissimilarities are, some of them affect each other in certain ways that are literally out of this world.

One perfect example of that is the pair Epimetheus and Janus. They are called co-orbital moons. But what does it really mean?

We have a clue by looking at the structure of the word “co-orbital.” The root word here is “orbital,” which has something to do with orbits. It is the path that the moons follow around Saturn. The word attached before it, or the prefix, is “co-.” In definition, “co-” means “together.” So, to put it simply, co-orbital moons share nearly identical orbit (orbits).

Aside from moons, other celestial bodies are involved in co-orbital relationships as well. Asteroids and even planets have co-orbital partners. The common thing about all of them is that they are in a 1:1 mean-motion resonance. It means that a body completes one orbit as the other makes one. 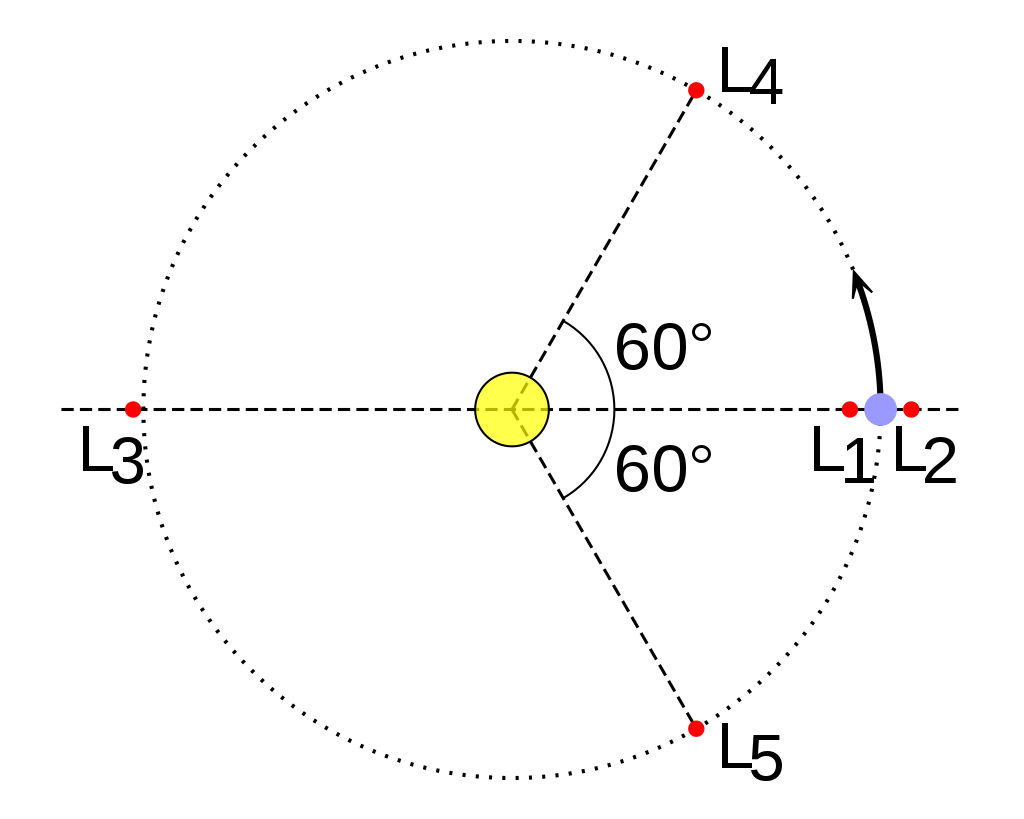 The trojans are another class of co-orbiting bodies wherein objects stay in L4 and L5 of the Lagrangian points. By staying in those stable points, they do not collide with the larger body between them.

The only known trojan moons in the solar system are found orbiting around Saturn. The large moon Tethys has two trojans, Telesto and Calypso. Dione also shares orbits with Helene, ahead of it, and Polydeuces, behind it. 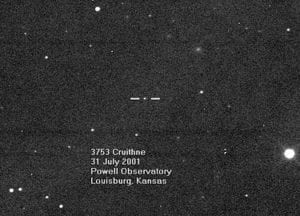 The Earth has a co-orbital asteroid called 3753 Cruithne. It is often dubbed as our planet’s second moon. But that is not the case because this object orbits the Sun and not Earth.

The orbit of Cruithne encompasses the orbits of Mercury and Mars. Since it is in a 1:1 orbital resonance with our planet, it also completes its orbit around the Sun in about one year.

With orbits as close as Epimetheus and Janus, it is a wonder how these two do not end up crashing into each other. They maintain a harmonious relationship by swapping orbits. Also, a collision between the two would be impossible as the closest they get to each other is 15,000 km away.

Between the two orbits involved, the moon following the inner orbit travels faster because it is closer to Saturn. It catches up with the moon in the outer orbit. The gravitational attraction between the two causes them to tug on each other as they get closer. As a result, the momentum of the inner moon is boosted, raising it to the outer orbit. The same amount of momentum is lost in the outer moon, making it fall in the inner orbit.

Thanks to their well-coordinated ballet, the moons Epimetheus and Janus are safe from any chance of collision. The illustration below will help us visualize their dance better. 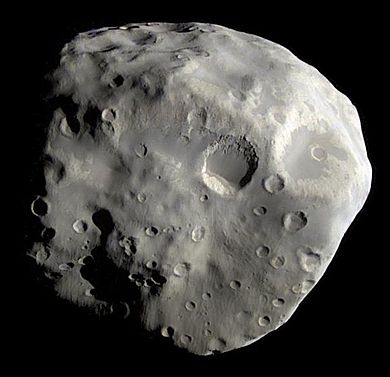 Saturn’s moon Epimetheus is one of its inner satellites. It is also called Saturn XI. This moon was named after the Titan Epimetheus, brother of Prometheus. It was observed by Richard Walker in 1966, just three days after the discovery of the moon Janus. The fates of the two moons have been tied ever since.

Epimetheus, together with Janus, lies in the gap between the F ring and the G ring. Remember that the rings of Saturn are divided into seven sections. They are D, C, B, A, F, G, and E, with the D ring as the nearest one to the planet and the E ring as the farthest.

The rings are influenced by the moons around them. In the A ring, for example, its gaps are maintained by the shepherding moons Pan and Daphnis. The small yet spherical Mimas keeps the Cassini Division in check. Icy particles released by the moon Enceladus play a big part in the shape of the E ring.

Epimetheus and Janus are involved in a 1:1 resonance orbital resonance. They partake in a unique celestial dance that involves essentially sharing and swapping orbits. For that reason, the two are called co-orbital moons. This exchange happens every four years.

Similar to other inner moons of Saturn, Epimetheus is in a synchronous rotation with the planet. By synchronous, it means that it takes for this moon the same time to rotate on its axis and orbit around Saturn. It results in being tidally locked or having only one side of this moon facing the larger body.

A faint ring concurrent to the orbits of Epimetheus and Janus looks like a new addition to the party that is Saturn’s rings. This diffuse structure was revealed by the Cassini spacecraft in a close flyby in 2006, shown above with the cross (+) mark. It is believed that it may have formed from the moons’ surface particles that were kicked into orbit by meteoroid impacts. We now call it the Janus/Epimetheus Ring.

The discovery of Janus led the way to uncover its twin, Epimetheus. French astronomer and specialist Audouin Charles Dollfus discovered Janus on December 15, 1966. He was able to observe the inner moon because of great timing.

The rings of Saturn were lying nearly edge-on to Earth at the time of Dollfus’s observation. If we say that something is edge-on, it means that we are looking at it from its side.

While the rings of Saturn are broad, they are thin. The edge-on view allowed Dollfus to see the small moon in the inner area of Saturn. He suggested that it be named “Janus.”

On December 18 of the same year, Richard Walker also observed a moon similar to Janus. It left everyone scratching their heads because the idea of two moons occupying nearly the same orbit was something unheard of before. It was a common belief that such a relationship would end up with the two satellites colliding.

For many years, only one moon was recognized in the said orbit. It was unofficially called Janus.

In October 1978, Stephen M. Larson and John W. Fountain cleared the confusion. They concluded that there are, in fact, two bodies following two nearly identical orbits. The other moon that Walker observed twelve years earlier was given the name Epimetheus.

In 1980, the statement of Larson and Fountain was confirmed by the probe Voyager 1.

The discovery of Epimetheus is a product of collaborative efforts and observations through time. With that said, the discovery for this moon is credited to Walker, who first observed it, together with Larson and Fountain who explained that the moon is indeed a separate body.

The craters on the surface of Epimetheus indicate that it is an old body. It is believed to be mostly made up of water ice. An indication of this is its high reflectivity or albedo which is roughly 70%.

Another assumption on the composition of Epimetheus is that it must be a rubble pile that gravity holds together. The moons Epimetheus and Janus are believed to be pieces of the same moon that split a long time ago when the Saturnian system was still young.

Epimetheus has an average distance of 151,000 km away from Saturn. With an eccentricity of 0.0098, it does not follow a perfectly circular path around Saturn. Instead, its orbit is more elliptical in shape.

It takes for this moon 0.694333517 Earth day to complete one trip around the ringed planet. That is just roughly 17 hours, far faster than the time it takes for our Moon to go around Earth, which is about 27 days.

Epimetheus, together with Janus, helps in keeping the edge of Saturn’s A ring sharp. A 7:6 orbital resonance involving the two maintains the shape of the ring. This role was previously believed to be played by the moon Atlas which is close to the ring’s outer edge. 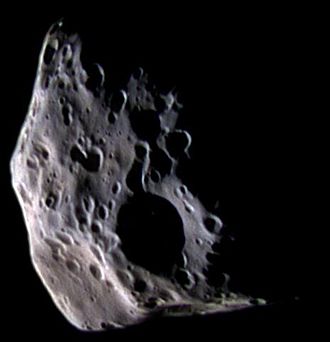 Unlike our planet’s Moon, Epimetheus is not spherical. It looks like a potato, irregularly shaped just like Janus. It is noticeably flat in the south pole because of a large crater. Grooves were seen on its surface, a feature similar to that of Phobos, a moon of the red planet, Mars.

Epimetheus and Janus are very similar in terms of surface characteristics which indicates that they may be two pieces from a single ancient body. Similarly, Hyperion, the largest moon with an irregular body, is also believed to have gotten its shape from a major impact.

The terrain of Epimetheus is made up of two contrasting features. There are parts with yellowish yet fractured terrain. Other areas are seen with darker material. Its surface is characterized by prominent craters. Some of them are larger than 30 km.

The most distinct ones were given names, inspired by the story of Castor and Pollux. The Epimethean craters are:

Janus also has its own set of named craters, after the characters of the same legend. The Janian craters are:

Both the craters of Epimetheus and Janus have soft edges because they are covered with dust. The dust is responsible for the formation of the faint Janus/Epimetheus Ring.

Before it was given its official name, the moon Epimetheus was temporarily designated 1979S1. The designation was based on the images taken of it by Pioneer 11 as it was seen in two of the images taken by the spacecraft. It was also referred to as S/1980 S3.

The International Astronomical Union (IAU) awarded the name of this moon in 1983 together with Janus, its orbital partner. Despite the fact that Janus was just given its official name in 1983, it had been called that way after its discovery, as proposed by Dollfus.

The names of Saturn’s moons are based on the stories related to its namesake mythological character. Its Greek counterpart is Cronus (Kronus).

The Titan Epimetheus was one of the sons of Iapetus and Clymene. His brothers are Atlas, Prometheus, and Menoetius.

Epimetheus and Prometheus are mentioned together several times in Greek mythology. They are usually given the title of being the “representatives of mankind.” Their characters are opposite to each other. It is evidenced by their names as Epimetheus means “hindsight” while Prometheus means “foresight.”

Epimetheus and Prometheus Were Given a Task

The Titan brothers were assigned the important task of giving traits to animals. These creatures were just newly created so they have to distribute them evenly.

Epimetheus, without having foresight, gave all positive traits to the animals that there is none left to give to mankind. Prometheus, thinking that he had to make up for this brother’s fault, stole fire for them from the gods. This, together with the arts, was the start of human civilization.

Prometheus was greatly punished for this. Because of stealing from the gods, he was bound to a rock where his liver would be eaten by the eagle. It will grow again overnight, only to be eaten again tomorrow.

Epimetheus Received Pandora as a Gift 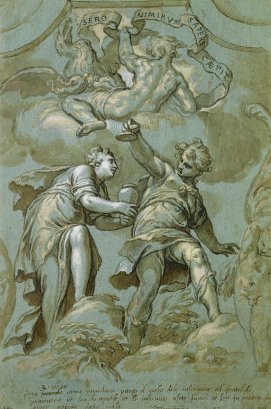 Prometheus had warned his brother Epimetheus before about receiving gifts from the gods. But, as naive as he was, Epimetheus accepted their gift in the form of a woman named Pandora. Little did he know that she came with a box that contained all the evils in the world. She later released them as she was overcome with curiosity. The only remaining thing in the box is “hope.”