The formation got its nickname of Keyhole Nebula in 1873 when an article written by Emma Converse, a science writer, appeared in a popular magazine of the day called Appleton’s Journal. In the article, Converse described the formation as appearing like a keyhole and the name stuck.

Actually, the structure is much more like an oval, and technically is termed a “lemniscate-oval vacuity,” which makes it easy to understand why the public preferred the nickname Keyhole Nebula!

Sometimes the Keyhole nickname is wrongly used to refer to the whole Carina Nebula because this structure has become so well known.

A nearby hypergiant star called Eta Carinae, another very well-known structure within the greater Carina Nebula, has caused the Keyhole Nebula to change over the centuries. This star is simply enormous, with a mass estimated to be up to 150 million times that of the Sun and a luminosity (brightness) 400 million times the Sun. This star emits a ton of radiation and that impacts all surrounding structures, including this nebula.

What makes the nebula slightly easier to see is that it is super-imposed on top of and just to the right of the much brighter Eta Carinae star. It is thought that the Keyhole formation itself may be as much as three million years old. 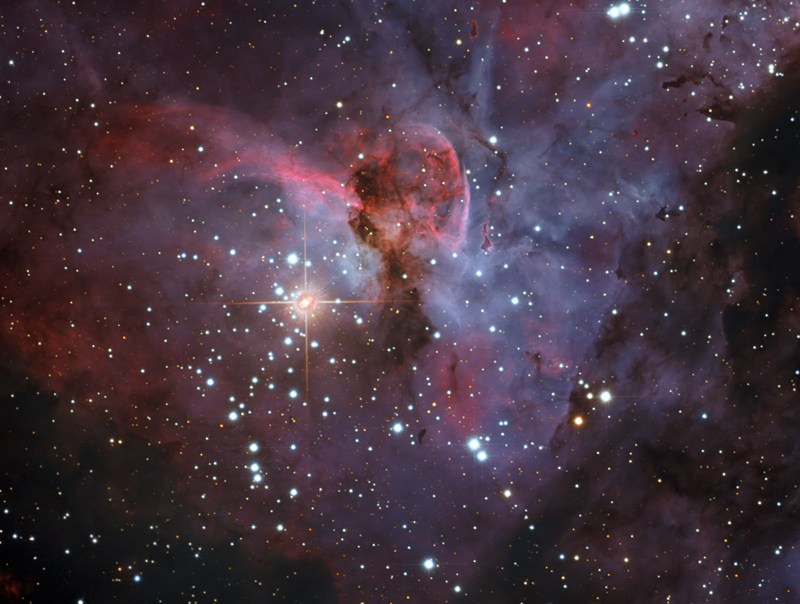 This is a profile offers an overview of the nebula formation.

– The Keyhole Nebula was first discovered by the English astronomer John Herschel in the 19th century. It now has its own designation in the New General Catalogue, NGC 3324, but in the past it shared a designation with the Carina Nebula.

– The Carina Nebula itself was discovered much earlier in 1751 by the French astronomer Nicolas Louis de Lacaille during his time at the Cape of Good Hope Observatory in South Africa. The reason de Lacaille did not discover the Keyhole Nebula as well is because he did not have strong enough equipment to detect this much fainter image.

– The Keyhole Nebula’s gaseous clouds actually contain a great deal of structure. Unlike the super-hot giant Eta Carinae in its backdrop, the nebula contains mostly cold molecules and gases. There may be at least nine separate clumps of gas that are operating independent of each other. Their interactions are likely spurred by stellar winds generated by Eta Carinae and the surrounding gases.

– There are several massive star formations hidden inside the Keyhole Nebula. Their activity continually changes how the nebula itself appears due to the intensity of their cosmic winds. Some astronomers speculate that the entire nebula structure appeared much more visible when it was first discovered in the 19th century, indicating it is changing relatively rapidly today.

– Astronomers now know that the distinctive keyhole shape that gave the Nebula its common name is caused in part by gaseous extinction and shock waves. As the dark clouds collide with ionizing gas filaments, the circular (oval) shape of the keyhole regions is maintained.

– The Keyhole Nebula and its surrounding Carina Nebula lie below the celestial equator, so they can only be viewed from locations in the Southern Hemisphere.

– Even though the Keyhole Nebula itself is just one small feature inside the Carina Nebula, it still required taking four separate images from the Hubble Space Telescope and assembling a montage to see it all in one image.