What Is the Universe? 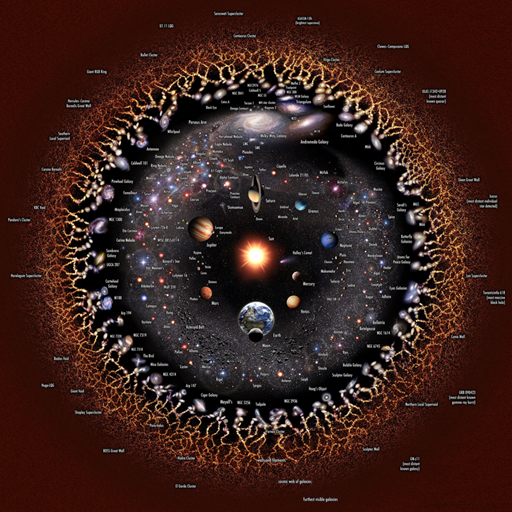 The Universe is a very big place that contains everything—including the things we can and cannot see. The Earth, Sun, Milky Way, black holes, and other stars and galaxies are all part of the Universe. And since our home planet is part of the Universe, we are, of course, in it too!

When we talk about the Universe, we do not just mean the visible celestial objects. It also encompasses space and time, as well as all forms of matter and energy. All of these contribute to how big the Universe is.

There is still much we do not know about the Universe. However, it is believed that ordinary matter, or the things that we can see, makes up only a very small part of the entire Universe. A big portion of it is composed of unknown components called dark matter and dark energy.

In earlier times, people had a very geocentric view of the Universe and that the Earth is at the center of it. Through astronomical observations, it is now known that the Sun, and not Earth is the center of the solar system.

The Great Debate of 1920 was significant because it discussed the nature of the “Great Spiral Nebula” which later became known as the Andromeda Galaxy. This discovery made it clear that the Milky Way is not the only galaxy in the universe. This led the way to the understanding that there are a great many galaxies in the Universe.

These things led to the understanding that we are just a speck in the bigger scope of things. By changing the lens of how we view things, we can have a better understanding of the size of the Universe.

Theories on the Beginning and End of the Universe 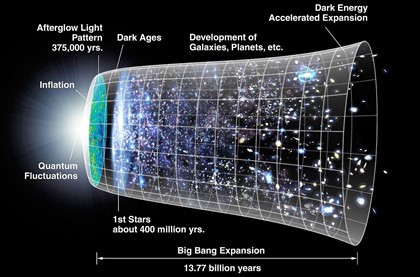 The branch of science that deals with the nature of the Universe is called “cosmology.” Cosmologists have different theories on how everything came to be.

The most prominent idea on the origin of the Universe is the Big Bang. According to this theory, the Universe started about 14 billion years ago as a single point. This single point experienced rapid expansion to become what we know it today.

It was supported by the findings of Edwin Hubble who observed the redshift of galaxies. He also noticed that farther galaxies were moving away faster from Earth. This movement is an indication that the Universe is still continuously expanding.

Scientists also have theories on the ultimate fate of the Universe. One of which is the Big Crunch. It assumes that the Universe will ultimately stop expansion and will contract back to singularity. Another theory is the Big Rip which states that spacetime will be torn apart because of the constant expansion of the Universe.

How Big is the Universe? 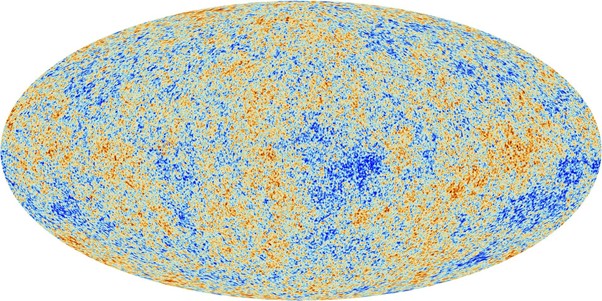 The vastness of the Universe is more than what the human eye can see. In fact, it is so big that we cannot see its entirety. We can only see a limited part of the Universe. For this reason, we use the term “observable Universe.”

Those early galaxies have already moved around 47 billion light-years away when their light reached us because the Universe has been expanding since the Big Bang.

The observable Universe is believed to be about 93 billion light-years across. But that is just as far as our modern science can currently see. It is believed that Universe, as a whole, is much larger than that.

According to a study by Oxford astronomers using the Bayesian model averaging, the Universe is at least 250 times greater than the observable Universe. This means it is at least 7 trillion light-years in diameter. Other sources suggest that the minimum size of the actual Universe may be 137 billion light-years.

The cosmic inflation equation gives an even greater value. It indicates that the Universe has a minimum diameter of 23 trillion light-years. 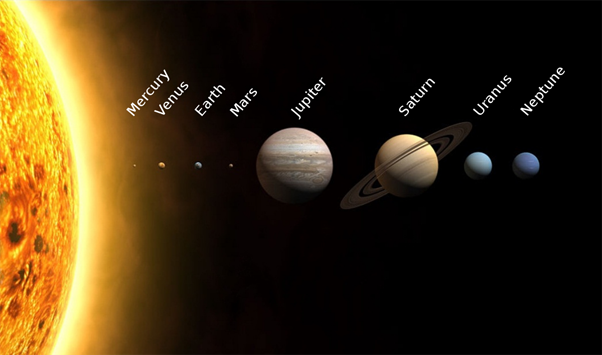 It is said that the size of the observable Universe is about 93 billion light-years across. To get an idea of how big it is, it helps to look at it in terms of our closest celestial neighbors in the solar system.

The Moon, the Earth’s only natural satellite, is the closest astronomical object to us. According to NASA, it is 384,400 kilometers or 238,855 miles away from us. At this distance, moonlight takes 1.3 seconds to reach us. And if we were to go to the Moon, we can reach there in just about three days.

Our central star, the Sun, is 150 million kilometers or 93 million miles from us. This distance equals 1 astronomical unit (AU). We sometimes use this unit of measurement to give us a perspective of how far other objects are in comparison to the Sun-Earth distance. For example, Pluto is 39.44 AU from the Sun. It means that this dwarf planet is 39.44 times as far from the Sun as the Earth is.

Sunlight travels 8 minutes and 20 seconds to reach Earth. With that said, the light that we receive on Earth is actually about 8 hours delayed because of the distance. To review, light travels 299,792 kilometers per second (186,287 miles per second).

Below is the travel time of sunlight to reach the planets in the solar system.

While AU is usually used when talking about things in the solar system, we use “light-years” for objects at much greater distances. A light-year is defined as the distance that light travels in one year in a vacuum environment. One light-year is equal to 63,000 AU or about 9 trillion kilometers (6 trillion miles).

How Fast Is the Universe Expanding?

The Universe is constantly expanding due to cosmic inflation. This expansion is one reason why the Universe is so big and that we may never get to see it entirely.

The Universe seems to be expanding faster than the speed of light. While it is true, it is important to think that the galaxies are not moving by themselves. Instead, they “appear” to be moving away from each other because the space between them is expanding or getting larger.

The Hubble Telescope was able to find the expansion rate of the Universe by observing Cepheid variable stars. This value is called the “Hubble constant.” This number is important because it is said to “set the scale of the Universe” in terms of size and age.

The expansion of the Universe was discovered by Edwin Hubble in 1929. He noticed that the galaxies are moving away from us. And not only that, but the farthest ones also appear to move the fastest. Hubble’s discovery has been supported by modern findings.

The earliest galaxies that astronomers observed were seen as they were about 13 billion years ago. However, the Universe has expanded ever since the light left those galaxies. This means those galaxies are located more than 13 billion light-years now.

The difference in the age of those galaxies and their actual distance in the present is proof that the Universe is indeed expanding.

What Shape Is the Universe? 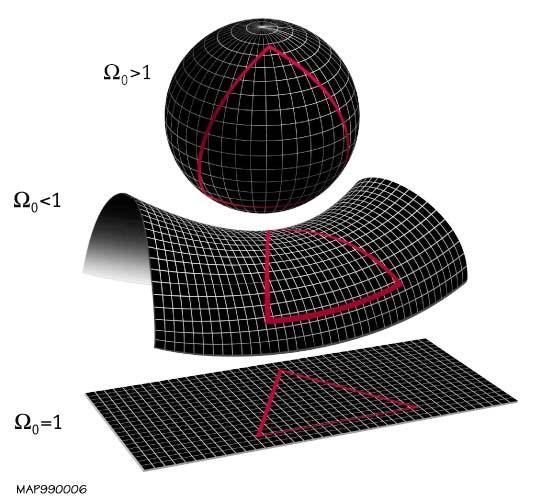 Knowing the shape of the Universe greatly helps in identifying just how big it is.

Still, identifying the exact form of the Universe remains a challenge as we do not have the technology to make interstellar or intergalactic travels. While some theories suggest an infinite Universe, what we know is that it has a finite age. Therefore, we can only observe a finite volume of it.

The Universe has three possible shapes according to Albert Einstein’s theory of General Relativity: flat, open, or closed.

Its shape will also tell us whether it is finite or infinite. That is, whether it will eventually collapse or just keep on expanding forever.

The Wilkinson Microwave Anisotropy Probe (WMAP) of NASA produced a full-sky map of the microwave sky. Temperature fluctuations of the CMB revealed that the curvature of space is within 0.4% of “flat” Euclidean. The improved Planck telescope of the European Space Agency (ESA) also delivered the same findings.

These findings indicate that the Universe expands in every direction, with nearly no positive or negative curvature. Of the three possible shapes, the flat Universe is the most prominent model. If it is indeed flat like a sheet of paper, then the Universe is infinite and has no definite size.

Can We See the Edges of the Universe? 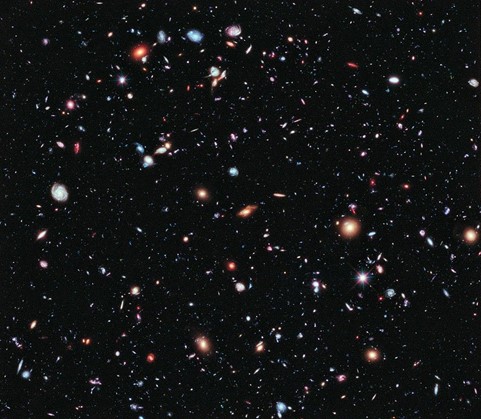 When talking about the “edge” of the Universe, we must first consider its shape. Its shape tells us whether it is finite or infinite, and only by then can we consider if it has an edge or not.

The Universe is still a big mystery to us for the most part. With our current knowledge and technology, we still do not know its exact shape. Therefore, there is also no way for us to know whether it is finite or infinite. For the most part, common consensus tells us that there is a big chance that the Universe could be flat and infinite.

The edge of the observable Universe is called the “particle horizon” or “cosmological horizon.” By definition, the particle horizon is the maximum distance that we can see at the current time. Again, it has no visible physical edge that will tell us where it ends.

How Long Would It Take To Travel to the Edge?

There is no way for us to determine the edge of the whole Universe. It is even more impossible to reach it because it is constantly expanding.

What we know for sure is that we have a particle horizon. This theoretical limit is 46.5 billion light-years in radius from Earth. With the current knowledge and technology that we have, here is how long it would take us to reach the following space destinations:

We can never get to the edge of the observable Universe, let alone in the actual Universe, even if we travel at the speed of light. Aside from not having the technology, the travel time is also way beyond the human lifetime.

Not only that, but we also have to consider the constant expansion of space. So even if, say, we can get in there in 225 trillion years, the particle horizon would have already moved farther due to cosmic inflation.

Is the Universe Alone? Or Is There More Than One? 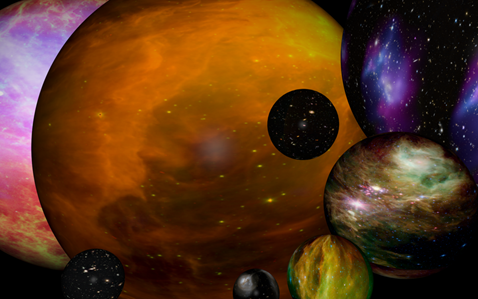 One of the many unanswered cosmological questions is whether there is more than one universe. Like how we do not know its exact shape and edge, there is also no way for us to know whether a multiverse exists or not. But cosmologists and physicists have their theories.

One theory suggests that our Universe is just one of the many bubble Universes. It is said that after the Big Bang, cosmic inflation happened in multiple places which created different bubbles or pockets. Inflation affected these bubbles differently. Because of this, the physical rules in one universe are different from that of the others.

Another multiverse theory is the Many-Worlds Interpretation (MWI) of quantum mechanics.

In our Universe, we only see one outcome for our actions. If we kick a ball, it can go this way or that way—but not both ways. However, in a multiverse inspired by quantum mechanics, the ball that we kicked may have gone different ways simultaneously in parallel universes.

While the idea of other universes is really interesting, there is still no way for us to know if they exist or not. What we know for now is that it is better to understand our known universe first before we search far and wide for other universes.

The Size of the Universe in Relative Terms:
https://commons.wikimedia.org/wiki/File:Planets2013.svg

How Fast Is the Universe Expanding?: http://chandra.harvard.edu/photo/2004/darkenergy/accel_expanding_univ_lg.mov

What Shape Is the Universe?: https://upload.wikimedia.org/wikipedia/commons/9/98/End_of_universe.jpg