There are no shortage of Halley’s Comet facts and lore, being one of the most documented comets in our history. Let’s start with a few of the biggest facts.

What Is a Comet?

We can think of comets as the “dirty snowballs” of space. These small Solar System bodies are composed largely of ice, dust, and rock. They are often called the “leftovers” of the Solar System formation. And because of that, they might hold clues about the origin of life and everything as we know it!

Since comets orbit the Sun just like our planet, there will be times when it will be much closer to this yellow fireball. When that happens, the heat of the Sun melts the ice and other particles of the comet. It then releases gases and clouds of dust. These things envelop the comet in a big atmosphere called a coma. A comet’s tail that extends millions of miles is also formed.

There are more than 4,000 known comets as of April 2021. However, this is just a small fraction of the possible total population of comets. More of them are expected to be in the Kuiper Belt and even more, about one trillion, are believed to be in the Oort Cloud.

We can identify comets into two groups according to their orbital periods. The orbits of these comets are elliptical, which means they are elongated and not circular.

We hear amazing facts about comets every now and then. Interestingly, there are some comet names that we hear more often than others. It might be because they are very bright, or that they produce great spectacles in the sky. Below are some of them. 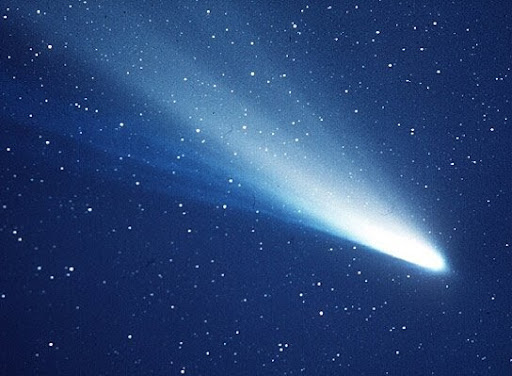 Halley’s Comet is also called 1P/Halley. It is a short-period comet that returns every 74 to 79 years. It is such as sight to see and is perhaps the most famous comet of all!

Historically, it was seen many times in the ancient past. Astronomers throughout time had different records of this comet in its many visits. However, it was only in 1705 that Edmond Halley discovered that it’s actually the same comet, reappearing periodically.

After his discovery, Edmond Halley predicted the comet’s reappearance in 1758. True enough, it was seen again on December 25, 1758. He did not live to see his calculations come true but the comet was named in his honor.

The last appearance of Halley’s Comet was in 1986 and its next visit is expected to be in 2061.

Halley’s Comet has a retrograde orbit. That means it moves around the Sun in the opposite direction as the planets.

It has a highly elliptical orbit with a semi-major axis of 17.834 AU. Its aphelion (the farthest point from the Sun) is as far away as Pluto at 35 AU. Meanwhile, this comet’s perihelion, or the closest point to the Sun is only about 0.6 AU. By this time, it approaches the inner Solar System between the orbits of the terrestrial planets, Mercury and Venus.

Unlike the nearly circular orbits of planets, the orbit of Comet Halley is very elongated with an eccentricity of 0.967. This orbit is also inclined by 162° since it is retrograde. Its average orbital period is about 75 years. 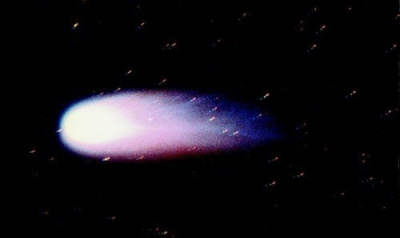 Halley’s Comet looks like a big ball of blazing light in our sky. However, its nucleus is relatively small when it is not surrounded by vaporized gases. It measures 15 km × 8 km with a mean diameter of 11 km.

The particles of Halley’s Comet are held loosely in a rubble pile with a density of 0.6 g/cm3. At 2.2×1014 kg, we can see that this object is not very massive. It takes 2.2 Earth days (52.8 hours) for it to rotate. But since it has a highly irregular shape, its rotation is more likely an erratic tumble.

Why Is It Called Halley’s Comet?

Halley’s Comet is named after the English astronomer Edmond Halley. He was the first one to discover that comets can be periodic and they can reappear in our night sky.

He understood the recurring nature of comets by studying records of those that appeared many years before. Halley also used Isaac Newton’s laws of gravity and motion to understand the effect planets have on cometary orbits. Eventually, he discovered that the apparitions of 1531, 1607, and 1682 were actually just the same comet. He said:

“I am more and more confirmed that we have seen that Comett now three times, since ye Yeare 1531.”

Interestingly, during Halley’s time, there was still no English standard spelling. And with that, the astronomer used different spellings of his name. Though most accounts that we read about him spell his name “Edmond Halley,” there are many other versions of this spelling.

He spelled his name Edmund in some publications but also used Edmond in others. There are even more variations of his surname’s spelling: Haley, Hailey, Hayley, Haly, Hawley, or even sometimes Hawly.

Still, no matter what spelling we use to refer to his comet, everyone will surely know what we mean! 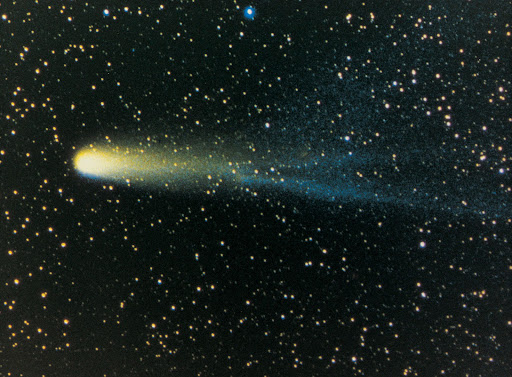 Periodic comets appear in our night sky after a certain period of years. This nature was first discovered on Comet Halley. And because of this, many people regularly wait for it when it visits our night sky every 74-79 years.

Interestingly, the orbital period of Halley’s Comet is about as long as the human life expectancy. And if we’re lucky enough, we can witness it twice in our lifetime! 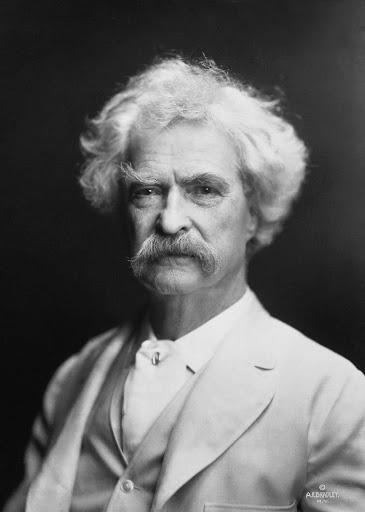 The well-known writer Mark Twain (Samuel Langhorne Clemens) shared a special connection with Halley’s Comet. He was born when the comet appeared on November 30, 1835. The next time it was about to visit Earth again, the writer famously said:

“I came in with Halley’s Comet… It is coming again … and I expect to go out with it… The Almighty has said, no doubt: ‘Now here are these two unaccountable freaks; they came in together, they must go out together.”

As if linked together from the start, Mark Twain died April 21, 1910, just one day after the comet’s perihelion.

Another thing that makes Comet Halley unique is that it is the only periodic comet that we can regularly see with the naked eye. It is consistently bright so we will surely see this spectacle whenever it passes our night sky!

Halley’s Comet has a rich history. It was mentioned in many ancient records from different parts of the world. 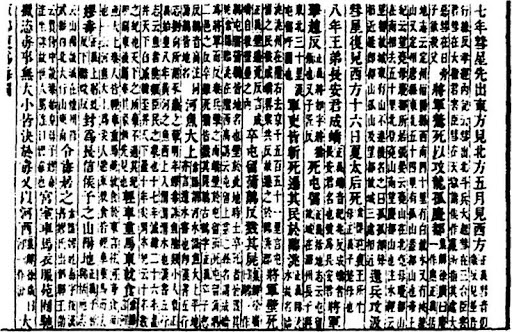 A comet sighting in ancient Greek around 468 and 466 BC was associated with Halley’s Comet. However, this is not yet confirmed. Historical records show that the first definite account of this comet was on 30 March 239 BC. Chinese astronomers recorded their observations in Shih Chi and Wen Hsien Thung Khao chronicles.

The comet’s appearance in 87 BC was also documented on Babylonian tablets. When it was seen again in 12 BC, the Romans took it as an omen of Marcus Vipsanius Agrippa’s death. Some theologians even think that the bright apparition may have been the Star of Bethlehem mentioned in the Bible story.

The closest approach recorded of Halley’s Comet was in 837. During this time, it passed at a distance of only 0.03 astronomical units (AU) from our planet. This event was seen all across the globe as mentioned in different records from Asia, Middle East, and Europe. 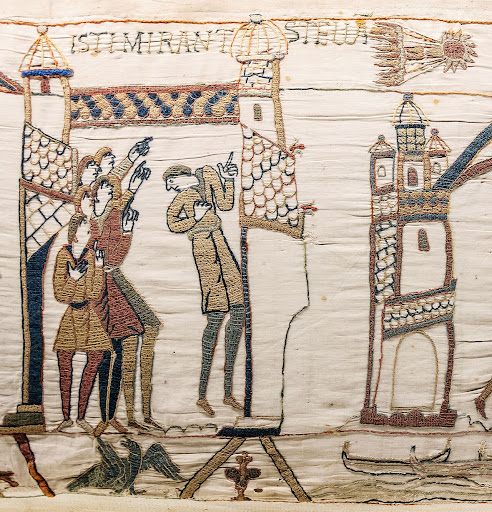 The appearance of Halley’s Comet in 1066 was portrayed in the Bayeux Tapestry. It was commonly interpreted as a sign of death and was linked to events like war. In England, many believed that it foreshadowed the death of Harold II (Harold Godwinson) as he fought in the Battle of Hastings. William the Conqueror, however, took it as a sign of his victory.

Similarly, the comet’s return of 1456 was associated with the Battle of Belgrade. 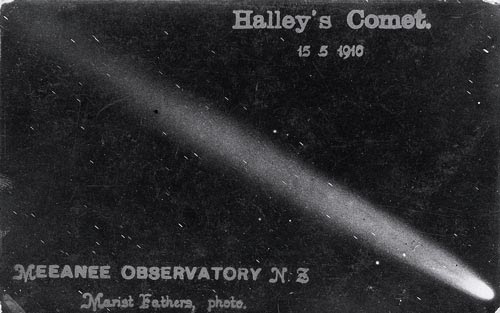 The return of Halley’s Comet in 1910 was a special one because the photograph was already readily available. 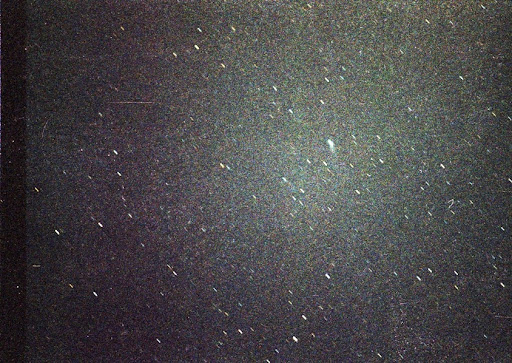 The last perihelion of Halley’s Comet was in 1986. The viewing experience was not very memorable for amateur observers because it was on the other side of the Sun. However, this visit marked an important milestone in space exploration. Some spacecraft were able to have close-up observations on the comet for the first time.

Because of this, we now have a clue of the comet’s structure, composition, and other properties. Also, it proved that Halley’s Comet is indeed a “dirty snowball” as predicted by astronomer Fred Whipple. 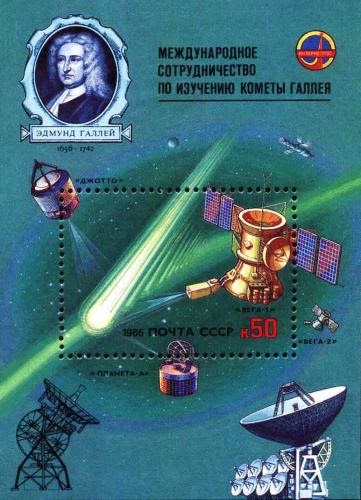 The Halley Armada is the collective name for the different spacecraft that made a journey to observe Halley’s Comet. It was an international collaboration that involved the European Space Agency (ESA), the USSR and France Intercosmos, and Japan’s Institute of Space and Astronautical Science (ISAS). The five main probes are:

With its flyby on March 6, 1986, Vega 1 took the first image of the famous comet’s nucleus. Meanwhile, the Giotto spacecraft made the closest approach to the nucleus of the comet and provided us an in-depth look at its surface. 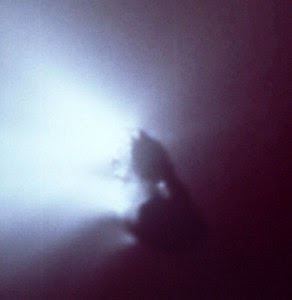 The nucleus of Halley’s Comet looks like a peanut shell as captured by ESA’s Giotto probe. This nucleus is very small when compared to the big coma that surrounds it.

Halley’s Comet is composed of volatile compounds that easily sublime as the comet approaches the Sun. The gases then envelop Halley’s Comet with an atmosphere that is about 100,000 km (62,137 miles) across.

The tail of Halley’s Comet is formed because of the solar wind that pushes the coma particles away from the Sun. This tail stretches millions of kilometers into space. And because of ionization from sunlight, we can see these gases glow in our night sky!