Let’s start off with some interesting Hale-Bopp comet facts, one of the most imagination grabbing objects seen in the sky with the naked eye in the 20th century!

What Is a Comet? 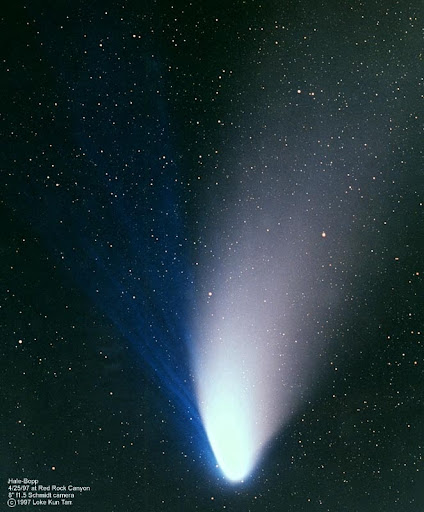 Comets are objects in space that are composed of rock, dust, and ice. They are like snowballs that orbit the Sun. As these things get closer to the burning Sun, the snowballs heat up and vaporize. These released gases and dust particles surround the nucleus. Tails are formed as the solar wind push against this spherical blob.

Comets become magnificent displays in the night sky because the surrounding gases glow as they get ionized.

A Comet is made up of ice, dust, and rocks while asteroids are composed of rocks and metals. Both objects are thought to have formed early 4.5 billion years ago when the Solar System formed was still young.

Asteroids are in the asteroid belt, between the orbits of Mars and Jupiter. Comets, however, formed very far beyond the Kuiper belt where it is cold. The ice of the comets would easily evaporate if they remain as close to the Sun as the asteroids.

Parts of a Comet

The three main parts of a comet are the nucleus, the coma, and the tail. 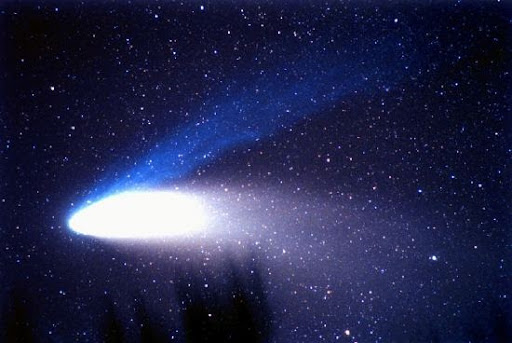 The Hale-Bopp Comet is a long-period comet that was discovered on July 23, 1995. Alan Hale and Thomas Bopp discovered it separately from different areas of the United States. This small Solar System body is also called Comet C/1995 O1.

Another designation for it is “The Great Comet of 1997” because it remained visible for 18 months. It has the second-largest nucleus known on a comet after 95P/Chiron. Because of its large size, it was seen even from a great distance which led to its discovery. It holds the record as the farthest comet discovered by amateurs.

Comet Hale-Bopp can get very bright as it approaches the Sun. However, we will not see it lighting up our sky for a very long time. This comet has a very long orbital period that takes about 2,533 years. After the last perihelion of April of 1997, its expected return will be in 4385.

Just like other big events that grazed our sky, people also had different stories and interpretations of the Great Comet. Some people believed that a UFO was trailing Hale-Bopp in 1996. The “Heaven’s Gate” cult also believed that a spaceship was following behind the comet so they committed mass suicide to get there.

Another tragic event relating to Hale-Bopp Comet was the death of Eugene Shoemaker. He discovered the comet Shoemaker-Levy 9 together with Carolyn Shoemaker, his wife, and David Levy.

Halle-Bopp Comet has a very elliptical orbit with an eccentricity of 0.995086. Since it travels from the Oort Cloud to the inner Solar System, it takes a very long time for it to complete an orbit. This period takes 2,520 to 2,533 years.

The comet’s semi-major axis is 186 AU. It is inclined 89.4° so it is nearly perpendicular to the ecliptic plane. Its aphelion, or farthest point from the Sun, is 370.8 AU while it can only be 0.914 AU away at perihelion.

The Hale-Bopp Comet likely made its first entry into the inner Solar System in 2215 BC. During that time, a near collision with Jupiter may have altered its orbit. Now, its calculated aphelion has become 370 AU from 525 AU.

One thing about Hale-Bopp Comet is for sure— that it is remarkably large. The nucleus is estimated to have a diameter of 60 km or 37 miles. With an albedo of 0.01–0.07, it has a very dark surface that absorbs most light that reaches it. Observations from Pic du Midi Observatory in 1997 calculate a rotation rate of 11.4 hours. 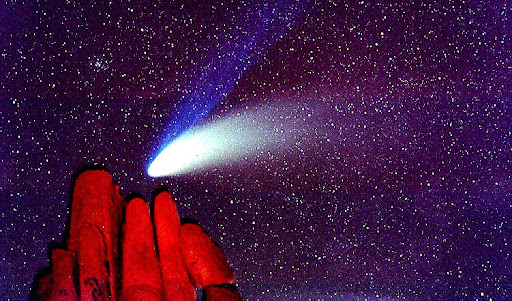 The comet Hale-Bopp reached an apparent magnitude of −1.8 during its approach in 1997. Aside from that, this bright comet grew two tails. The ion tail was going in the opposite direction as the Sun while the dust tail was curved along its orbit.

The nucleus of the Hale-Bopp Comet is made up of ice, dust, and rock. But unlike Halley’s Comet, no direct image was taken of its nucleus yet. This large nucleus released a large amount of gas and dust grains during its last passage in the inner Solar System. The comet’s isolated ice particles displayed random outbursts, indicating the dynamic nature of the nucleus. 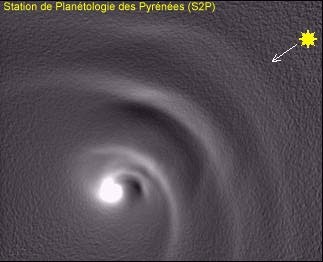 The image above was taken by Pic du Midi Observatory just two hours after the 1997 perihelion. It shows a double-shell system of dust surrounding the Hale-Bopp Comet. Some believe that it may have a binary nucleus that could explain the intense brightness displayed. However, this hypothesis has not been proven yet.

Alan Hale, who is a professional astronomer, happened to come across the then-unknown comet after midnight in New Mexico. As he had recently observed M70 just days before, he immediately noticed the new object near it.

He checked for known deep-sky objects and comets near the globular cluster in the Sagittarius constellation. It was not on the list, and, after observing it again, the object had actually moved!

Meanwhile, in Arizona, Thomas Bopp was observing the night sky with friends when he saw the comet. The amateur astronomer also checked the records for celestial objects near M70. Upon realizing that he had stumbled across an undiscovered object, he informed the Central Bureau for Astronomical Telegrams, just like Hale.

Why Is It Called Hale-Bopp Comet?

Having learned of the comet’s discovery, we can see that it was named after its two discoverers, Alan Hale and Thomas Bopp. Astronomer Brian G. Marsden received their messages about the findings, though Bopp’s arrived much later since he sent it via the telegram.

After confirmation, the new comet was included in the International Astronomical Union Circulars (IAUCs). Afterward, it was designated C/1995 O1.

The Comet Hale-Bopp is memorable in many ways. First of all, it was the most distant comet discovered through amateur observation. At the time, it was probably between the gas giants Jupiter and Saturn, or roughly 7.2 AU from the Sun. Most comets around that distance would be unobservable from Earth.

The Hale-Bopp Comet is about six times as big as Halley’s Comet. And according to NASA, it is five times larger than the object that struck the Earth and wiped out the dinosaurs.

Another thing that makes this comet special is its size. It is estimated to be around 60 km (37 miles) across. Not only that, but its nucleus also showed activity even though it is still far from the Sun. It was enveloped in a coma while it was still around the distance of the Jovian planets. 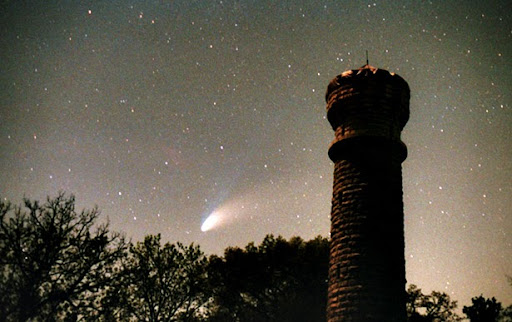 The most special thing about the Hale-Bopp Comet was its last perihelion. It was visible to the naked for a very long time, from May 1996 to December 1997. Not only was it seen for days and weeks but for 18.5 months—that was one and a half years long!

The comet’s large size allowed it to be visible for so long. It occupied the media and the internet as it approached the inner Solar System. It became a common thing of interest between amateur observers and astronomers alike. People were so curious about it that it somehow caused a traffic jam on the internet.

Visible for 18 months, the Hale-Bopp Comet is considered the longest-visible comet in history. Before the spectacle in 1997, the previous record-holder was C/1811 F1. Also called the Great Comet of 1811, the spectacle lasted for 200 days.

As it got closer to the Earth, astronomers noticed that it released way more gas and dust than the other comets. The very active nucleus of the comet made it appear even brighter. Outgassing and dust production were so high as it approached the Sun. It had a blue gas tail and a second dust tail was also seen. Amazingly, astronomers discovered a rare third tail between the two which is a sodium tail. 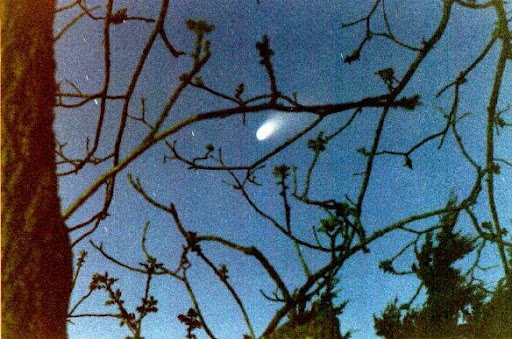 The Hale-Bopp Comet of 1997 was especially a treat for observers in the northern hemisphere. It was visible before dark and stayed so all night. Some even saw it in the daytime during an eclipse. The passed Earth at 1.315 AU about a month before it reached its closest point from the Sun.

Comet Hale-Bopp reached perihelion on April 1, 1997. By that time, it got so bright, reaching an apparent magnitude of about -1.8. Other than Sirius, the comet shone brighter than all the other stars in the night sky. Its tail extended across the sky at about 40–45 degrees.

In 2001, the European Southern Observatory (ESO) observed the Hale-Bopp Comet four years after perihelion. The astronomers found out that its nucleus was still very active even at extremely low temperatures.

UFO, A Cult, and the End of the World

The Great Comet of 1997 drew a lot of interpretations from different people. One of which started when Chuck Shramek took a charged-coupled device (CCD) image of Hale-Bopp in 1996. He saw an object near the comet that he did not recognize so he announced his discovery on a radio program.

Though a lot of UFO enthusiasts agreed with him, some astronomers believed that the object was actually a star.

As the Hale-Bopp Comet was approaching perihelion, the concept of Nibiru or Planet X also got more famous. The belief was originated by Nancy Lieder. She claimed that extraterrestrial beings of the Zeta Reticulli system communicated to her through an implant they put in her brain.

She said that the Zetans warned that the comet was just a made-up thing to distract people from Planet-X. According to her, a close passage or collision between Earth and Planet X will lead to the end of the world.

She later removed her statement on her site, Zetatalk, when the Hale-Bopp Comet turned out to be the brightest comet of the century. After being observable for a long time, it was apparent that the comet was not a “fraud” after all. Lieder also proclaimed another Planet X encounter in 2003 and 2012. 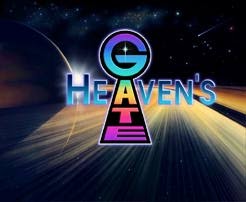 The UFO religion Heaven’s Gate was founded in 1974 by Bonnie Nettles and Marshall Applewhite. They refer to themselves as Ti and Do and identified themselves as the two witnesses in the Book of Revelation. Members of this cult believe they will become immortal extraterrestrial beings and will go to heaven or, as they call it, the “Next Level.”

Just like Shramek, the cult also believed that a spaceship was following the comet. For them, the Hale-Bopp Comet was a sign of the “closure to Heaven’s Gate” and the “only way to evacuate” the Earth was through mass suicide. Because of that, 39 people, including Applewhite, drank Phenobarbital which led to their death.

The followers did the so-called “ritual” so their souls could get in the spacecraft that they believed was behind Hale-Bopp Comet. The tragic event happened in March 1997. When found by the authority, the members were seen wearing the same clothes and it was believed that the “ritual” took place for three consecutive days. Other former members of the cult also committed suicide months after.

Parts of a comet: https://starchild.gsfc.nasa.gov/Images/StarChild/solar_system_level2/comet_parts.gif