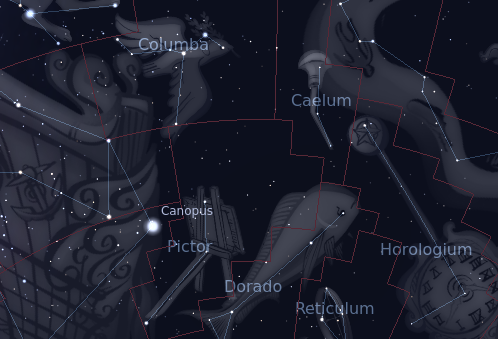 History And Mythology Of The Pictor Constellation

The constellation of Pictor was first introduced by Nicolas Louis de Lacaille in 1756 as le Chevalet et la Palette, which means “the easel and palette.” In 1763, he named the constellation Equuleus Pictoris on his planisphere, but this was shortened to Pictor in 1845 by the English astronomer Francis Baily in his British Association Catalogue. This was a suggestion by John Herschel, who was an English astronomer and mathematician. Pictor is not associated with any myths. 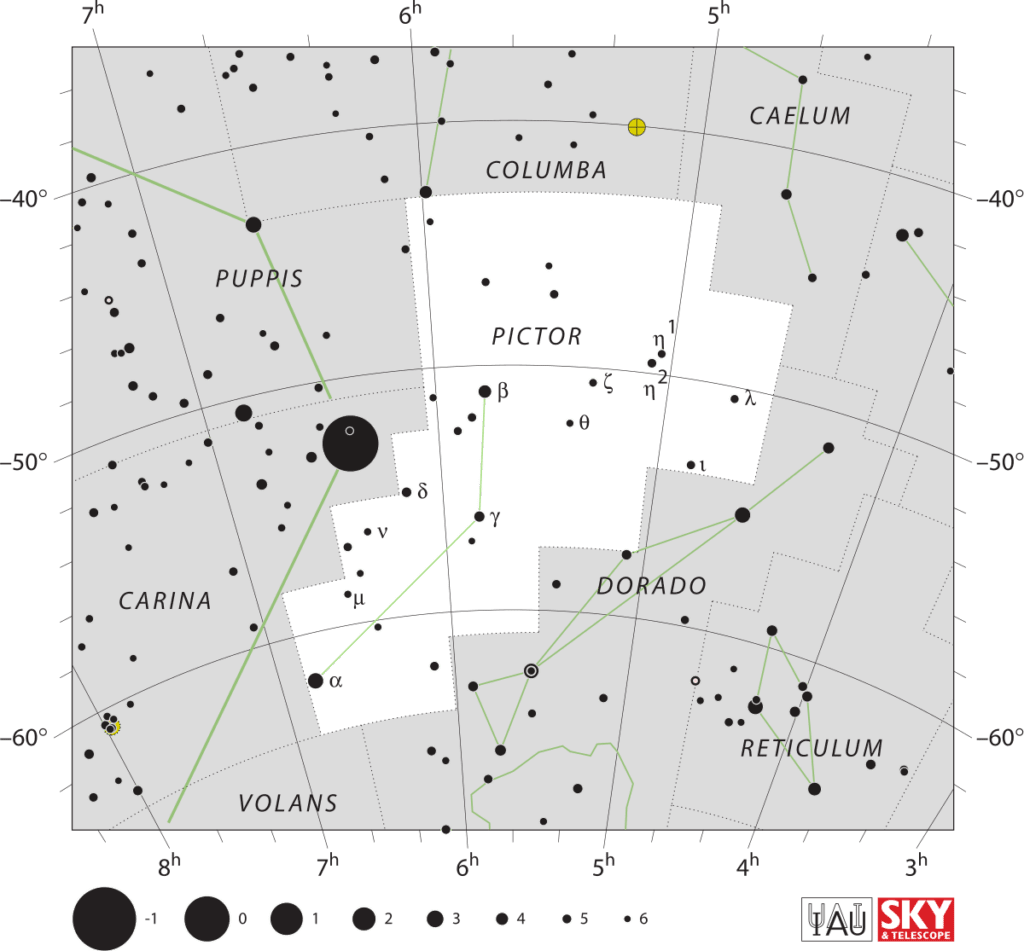 Location Of The Pictor Constellation

Pictor Constellation is the 59th largest constellation in the night sky and occupies an area of 247 square degrees. It is located in the first quadrant of the southern hemisphere (SQ1) and can be seen at latitudes between +26° and -90°.

Its right ascension is 4.53h – 6.85h and its declination is −43° – −64°. It is best seen at 9pm, during the month of January. Pictor culminates each year at 9 p.m. on 17 March. Its position in the far Southern Celestial Hemisphere means that the whole constellation is visible to observers south of latitude 26°N, and parts become circumpolar south of latitude 35°S.

The neighboring constellations to Pictor are Caelum, Carina, Columba, Dorado, Puppis and Volans and it belongs to the Lacaille family of constellations, along with Antlia, Caelum, Circinus, Fornax, Horologium, Mensa, Microscopium, Norma, Octans, Reticulum, Sculptor and Telescopium. 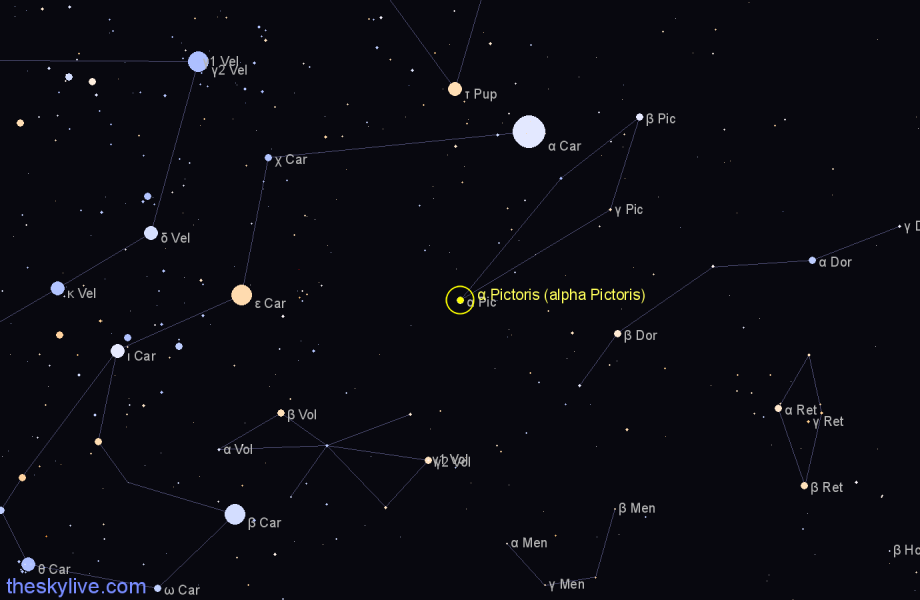 Alpha Pictoris is the brightest star in the constellation of Pictor and has an apparent magnitude of 3.27. It is a white main sequence star with the stellar classification of A8 Vn kA6 and is bright enough to be seen without binoculars from the southern hemisphere. It is also a Lambda Boötis type star, which means it is a star with very low abundance of iron peak elements in its surface layers.

The star is a known X-ray source, which may also suggest it is a spectroscopic binary systems although this is unknown.

Beta Pictoris is the second brightest star in the constellation of Pictor and has an apparent magnitude of 3.861. It is located around 63.4 light years away from Earth and is located just to the west of the bright star Canopus in Carina constellation. It is a white main sequence dwarf with the stellar classification of A6 V and is also classified as a Delta Scuti variable, which means that it exhibits variations in brightness as a result of both radial and non-radial pulsations of its surface.

The star is the brightest member of the Beta Pictoris Moving Group, which is a group of young stars that share a common origin and a common motion through space. It is the closest young stellar association of this kind to Earth.

Gamma Pictoris is the third brightest star in the constellation of Pictor and has an apparent magnitude of 4.50. It is an orange giant belonging to the stellar class K1III and is located around 174 light years away from the Sun.

Delta Pictoris is located around 1,655 light years away from Earth and has an apparent magnitude of 4.72. It has the stellar classification B3III and is also classified as a Beta Lyrae variable, which means it exhibits variations in luminosity. Its luminosity varies from magnitude 4.59 to 4.8 over a period of 40.08 hours.

AB Pictoris is an orange main sequence star that belongs to the stellar class K2V and has an apparent magnitude of 9.16. It is also a BY Draconis variable, which is a main sequence variable star that exhibits variations in brightness as a result of rotation. It is located around 148 light years away from the Sun.

In 2003 and 2004, an object was observed near the star that had the same proper motion, which indicated that the two were physically close. It has an estimated mass about 13.5 times that of Jupiter.

HD 41004 is a multiple star system, with the main component being a an orange main sequence dwarf star that belongs to the stellar class of K1 V. It has an apparent magnitude of 8.65 and is located around 138.6 light years away from the Solar System. It has a planet in its orbit, which was discovered in 2003. The planet’s mass is at least 2.56 times that of Jupiter and orbits the star with a period of 963 days.

The secondary component in HD 41004 is a red dwarf of the spectral type M2V with a visual magnitude of 12.33. It is located around 140.35 light years away from us and has a brown dwarf in its orbit, with an orbital period of every 1.3283 days.

Kapteyn’s Star is a red dwarf belonging to the spectral class M1 with an apparent magnitude of 8.853. It was first catalogued by the Dutch astronomer Jacobus Kapteyn in 1898 and, at the time of discovery, had the highest proper motion of any star known, more than 8 seconds of arc per year.

This red dwarf is located around 12.76 light years away from Earth and can be seen through binoculars or a small telescope. About 10,800 years ago, the star came within 7 light years of the solar system and has been moving away since. 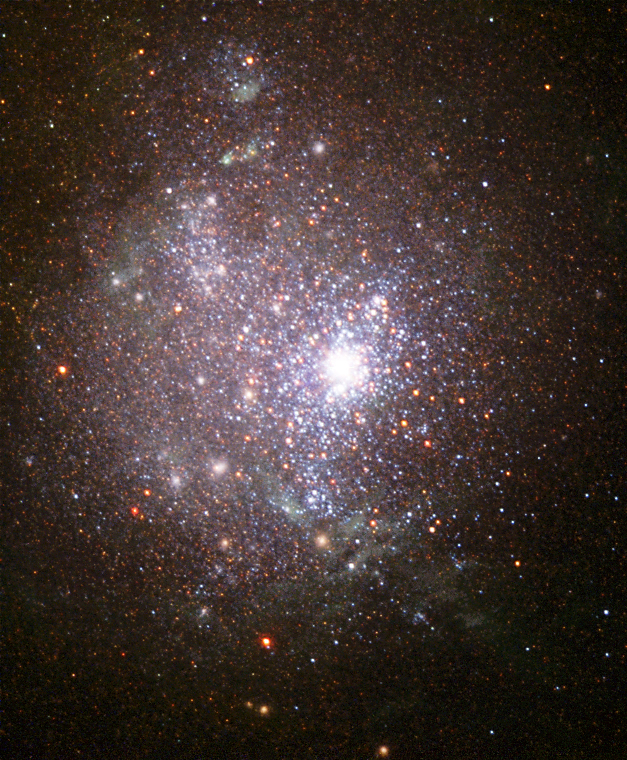 NGC 1705 is a peculiar lenticular galaxy with a visual magnitude of 12.8. It is classified as a Blue Compact Dwarf (BCD) galaxy, which means that it contains large clusters of hot, young, very massive stars which make the galaxy appear blue.

It is located around 17 million light years away from Earth and is also a member of the Dorado Group, a loose group of galaxies located primarily in the Dorado constellation.

SPT-CL J0546-5345 is a massive galaxy cluster that contains hundreds of galaxies. It was discovered in 2008 and is one of the most massive clusters to ever be discovered in the early universe. Today, the cluster is estimated to already be four times larger.

Pictor A is a double lobed radio galaxy with a supermassive black hole in its centre. The hole has a relativistic jet shooting out 800,000 light years to a bright X-ray hot spot located at the western end of the galaxy’s western lobe. These jets are thought to be produced by the powerful electromagnetic forces created by magnetized gas swirling toward a black hole.