The Delphinus constellation is recognizable for the diamond-shaped pattern that outlines the body of the celestial Dolphin, formed by its brightest stars, known as Job’s Coffin. 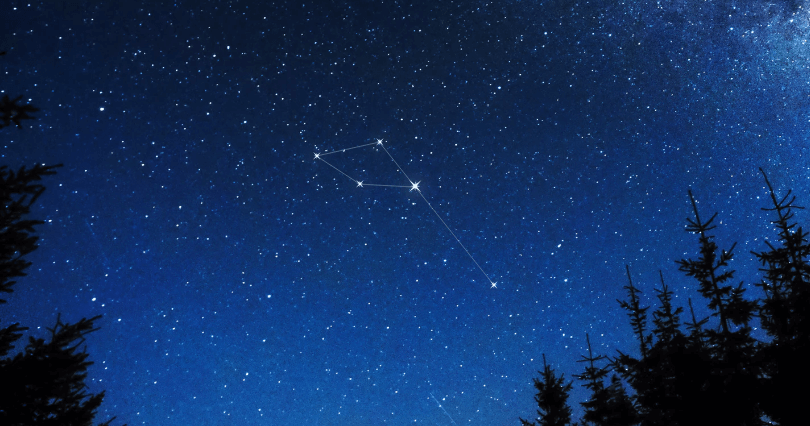 Delphinus has five stars with known planets and contains five formally named stars. The star names, as approved by the International Astronomical Union (IAU), are Aldulfin, Musica, Rotanev, Shama and Sualocin. The brightest star in the constellation is Rotanev with an apparent magnitude of 3.617.

There are no Messier objects in Delphinus and no meteor showers associated with the constellation. However, it does contain interesting deep sky objects, such as globular clusters NGC 6934 and NGC 7006 and planetary nebulae NGC 6891 and NGC 6905.

History and Mythology of the Delphinus Constellation

Delphinus is associated with two stories in Greek mythology. The first relates to the story of Poseidon and Amphitrite. Greek god Poseidon wanted to marry Amphitrite, a beautiful nereid, but Amphitrite wanted to protect her virginity and fled to the Atlas mountains. Poseidon sent out searchers to look for her, one of whom was Delphinus. Delphinus came across Amphitrite and was able to persuade her to accept Poseidon’s offer. As a thank you, Poseidon placed the image of a dolphin among the stars.

In the second story, Delphinus was placed in the stars for saving the life of Arion. Arion was a court musician at the palace of Periander, ruler of Corinth, who had amassed a fortune during his travels to Sicily and Italy. On his way home from a concert tour of southern Italy, other crew members on the ship started plotting to kill him and take the money he had earned. As he was threatened with death, Arion asked for one last wish which the crew granted: he wanted to sing a dirge. As he sang, he flung himself into the sea where he was rescued by a dolphin which had been charmed by Arion’s music.

Apollo then placed the dolphin next to the constellation Lyra in the sky, as it represents Arion’s lyre. 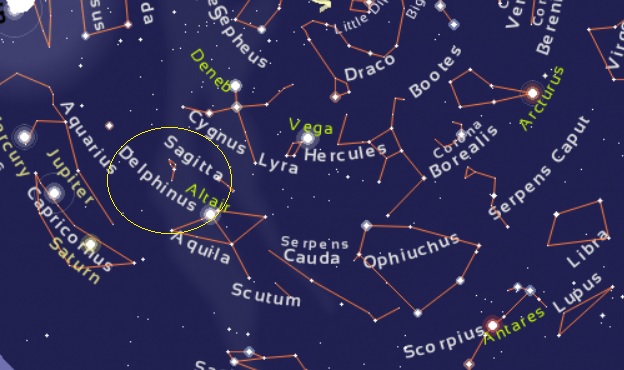 Location of the Delphinus Constellation

Constellation Delphinus is the 69th largest constellation in size, occupying an area of 189 square degrees. It lies in the fourth quadrant of the northern hemisphere (NQ4) and can be seen at latitudes between +90° and -70°.

It is easy to find in the sky because its brightest stars form an asterism that represents the celestial dolphin, known as Job’s Coffin. Sualocin, Rotanev and Gamma and Delta Delphini form the dolphin’s body, and Aldulfin marks the tail. 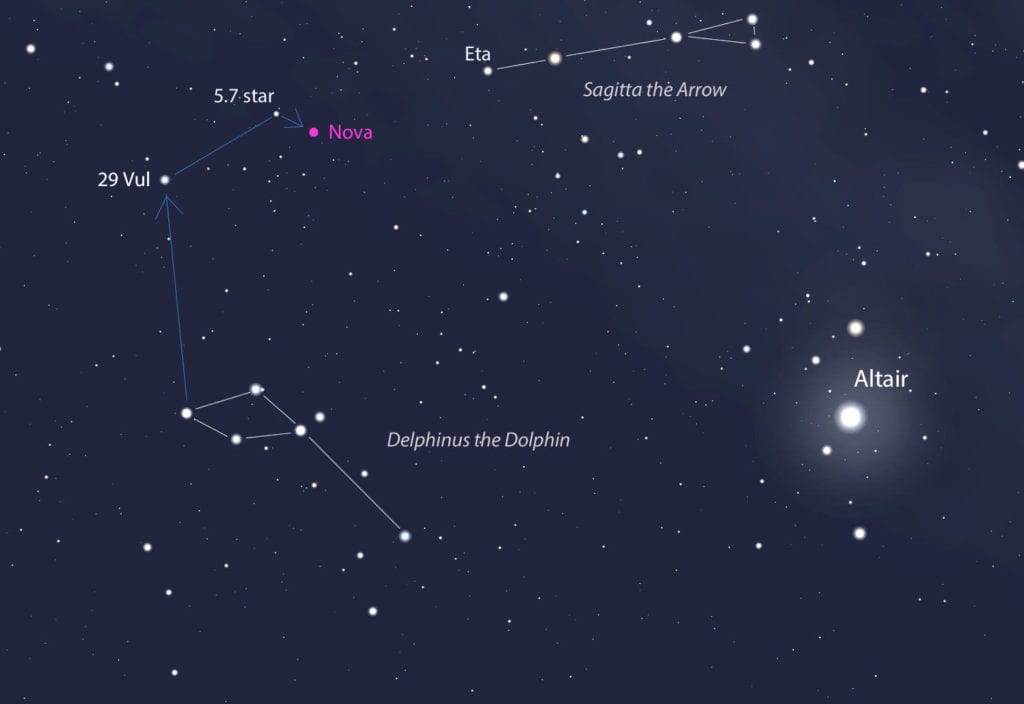 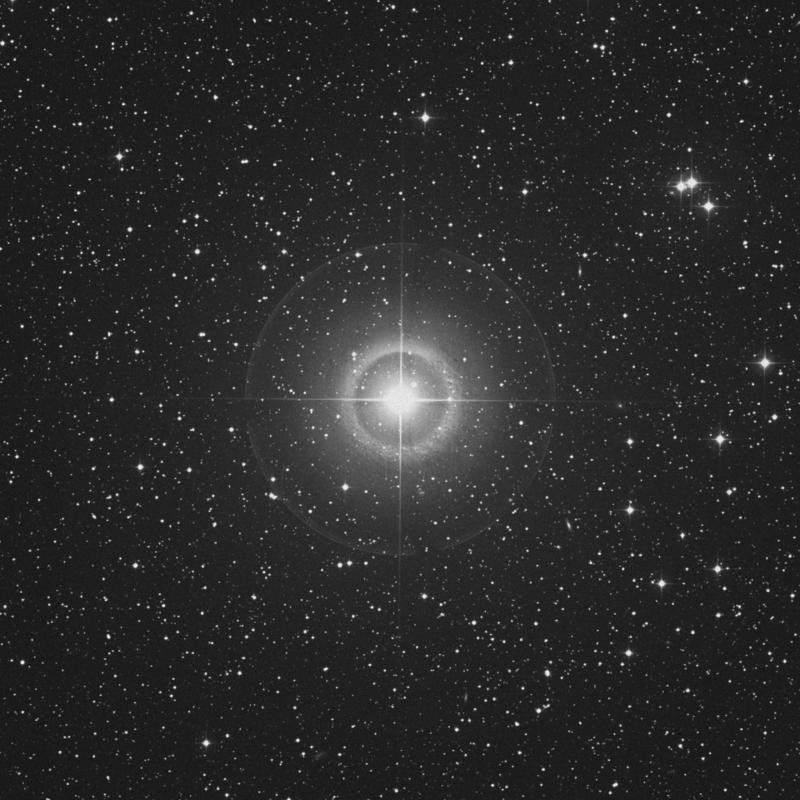 Rotanev, also known as Beta Delphini, is the brightest star in the constellation of Delphinus and has an apparent magnitude of 3.617. It is a binary star and was discovered as one in 1873 by the American astronomer S. W. Burnham. It consists of two white stars of the spectral types F5 III and F5 IV, a giant and a subgiant, which appear as a single point of light to the naked eye. They are separated by 0.44 arcseconds and orbit each other with a period of 26.66 years.

Rotanev is located 101 light years from Earth. Its name was given to it by the Italian astronomer Niccolò Cacciatore. Spelled backwards, it is “Venator”, which is the Latinized version of Cacciatore’s family name, which means “hunter.” 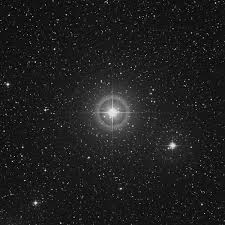 The main pair form a spectroscopic binary star that are separated by only 0.2 arcseconds and orbit each other with a period of 17 years. Alpha Delphini Aa is the primary component that is a blue-white subgiant with the stellar classification B9IV. It is thought to be around 227 million years old, has a radius that is 3.92 times that of the Sun and a mass that is 2.82 times that of the Sun. Alpha Delphini Ab is the companion, but its properties are difficult to determine because it is much fainter and lies too close to the primary.

Alpha Delphini is located 254 light years away from Earth. Its name was given to it by the Italian astronomer Niccolò Cacciatore. Spelled backwards, it is the Latinized version of “Nicolaus”, his first name. 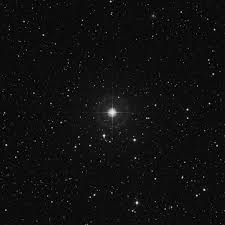 Musica, also known as 18 Delphini, is a yellow giant star with an apparent magnitude of 5.506. It is located around 249 light years away from us and has a mass 2.3 times that of the Sun. It also has a radius 8.5 times that of the Sun and is 40 times more luminous than the Sun.

The name of the star is linked to the Greek myth of Arion, whose life was saved by dolphins at sea. In 2008, an exoplanet was confirmed in Musica’s orbit. It orbits the star from a distance of 2.6 astronomical units with a period of about 993.3 days. The planet itself has a mass at least 10.3 times that of Jupiter.

Aldulfin, also known as Epsilon Delphini, is a blue-white giant of the spectral type B6III with an apparent magnitude of 4.03. It is also a suspected variable star, because its brightness has been observed to vary from magnitude 3.95 to 4.05. Its name comes from its traditional name, Deneb Dulfim, derived from the Arabic ðanab ad-dulfīn, meaning “the dolphin’s tail”.

Aldulfin, is located 330 light years away from us. It is 676 times more luminous than the Sun and 4.6 times larger than the Sun.

Shama, also known as HD 99109, is an orange main sequence star of the spectral type K0V with an apparent magnitude of 9.10. It has a mass that is 93% of the Sun, which makes it slightly less massive than the Sun. It also has 0.724 solar luminosities and a metallicity 2.07 times that of the Sun.

Shama is around 160 light years away from us and is invisible to the naked eye. In 2006, a planet was confirmed to be orbiting it at a distance of 1.105 astronomical units with a period of 439.3 days. The planet has a mass of at least 0.502 Jupiter masses.

Delta Delphini is a is a spectroscopic binary star that is located 223 light years away from the Sun and has a combined apparent magnitude of 4.43. Both stars are classified as Delta Scuti variables. This means that their brightness varies as they expand and contract, from magnitude 4.38 to 4.49 over a dominant period of 0.1568 days.

The two components have a combined spectral class of kA7hF0mF0(IV-V), which indicates a white star that is coming to an end of its main sequence lifetime. They orbit each other with a period of 40.605 days.

Gamma Delphini is a binary star system that is made up of a white main sequence star of the spectral type F7V and an orange subgiant with the stellar classification K1IV. The two stars have apparent magnitudes of 5.14 and 4.27 and are separated by 10.22 arcseconds. They orbit each other with a period of 3,249 years. The system is located around 101 light years away from Earth.

In 1999, a planet was discovered to be orbiting the companion, but this has yet to be confirmed.

Rho Aquilae is a white main sequence dwarf of the spectral type A2V with an apparent magnitude of 4.94. It is thought to be around 50 and 120 million years old and is located around 150 light years from Earth. It is also 19.5 times more luminous than the Sun.

The star has the Bayer designation Rho Aquilae because it belonged to the constellation Aquila until 1992. However, it moved across the border into Delphinus after. It is also known by its traditional name, Tso Ke, which means “left flag” in Mandarin. 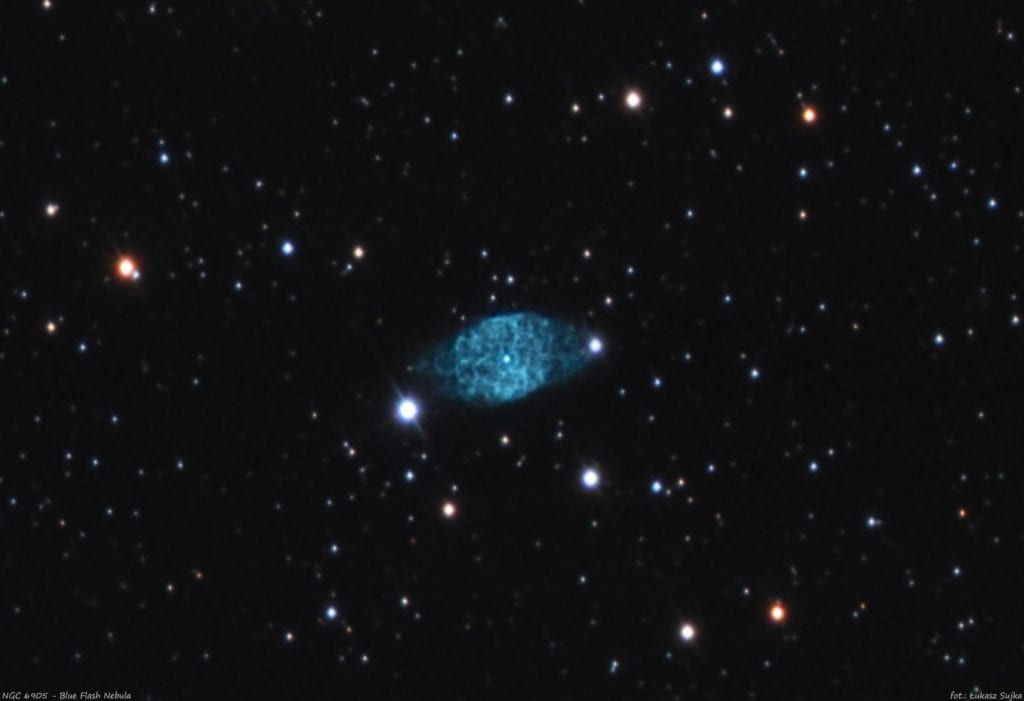 Blue Flash Nebula, also known as NGC 6905, is a planetary nebula that was discovered by William Herschel in 1784. It has an apparent magnitude of 10.9 and can be observed in a six-inch telescope. It is small and has a bluish color, and is located 7,500 light years away from us.

NGC 6891 is a planetary nebula that was discovered by Scottish astronomer Ralph Copeland on 22 September, 1884. It is small, with an apparent size of 0.33′ by 0.3′, and is located near the star Rho Aquilae, about 7,200 light years away from Earth.

NGC 6934, also known as Caldwell 47, is a globular cluster with a visual magnitude of 8.83 that was discovered by William Herschel on September 24, 1785. It is relatively large, occupying 8.4′ of the sky, and is located near the star Epsilon Delphini, around 52,000 light years away from us.

NGC 7006, also known as Caldwell 42, is a globular star cluster with a visual magnitude of 10.6. It occupies 2.8′ of the apparent sky. This cluster is located on the outskirts of the Milky Way, approximately 137,000 light years away from us, and is part of the galactic halo, a region of the Milky Way spherical in shape and consisting of gas, dark matter and the occasional star cluster. It appears close to the star Gamma Delphini.

NGC 7025 is a spiral galaxy that is also classified as a LINER galaxy. It spans 161,830 light years in diameter and has an apparent magnitude of 13.71. It is located around 207 million light years away from us.