Crater Constellation is located in the the southern sky and was first catalogued by the Greek astronomer Ptolemy in the 2nd century. It is one of the Greek constellations and, in Greek mythology, represents the cup of the god Apollo. Its name also means “the cup” in Latin.

There are no Messier objects in Crater, one meteor shower associated with the constellation — the Eta Craterids. They take place between 11 and 22 January, peaking around January 16 and 17. 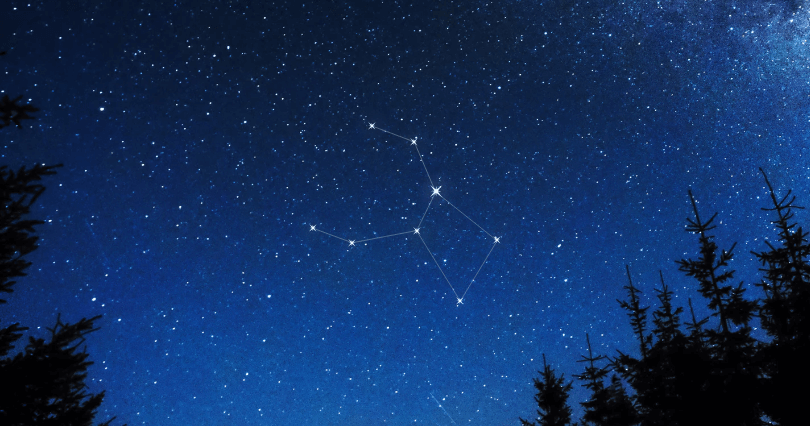 History and Mythology of the Crater Constellation

The constellation of Crater represents the cup, usually depicted as a two handed chalice, of the Greek god Apollo in mythology. Crater is sometimes associated with with the story of Apollo and his crow or raven which serves him. Apollo sent the bird to fetch water, but it delays its journey as it finds some figs and waits for them to ripen before eating them. When it finally retrieves the water and takes the water back to Apollo, the bird takes a snake too (represented by the constellation of Hydra) and blames the snake for drinking the water.

However, Apollo sees through the lies and angrily casts the crow, cup and snake, into the sky. The three constellations are arranged in such a way that the crow is prevented from drinking from the cup, and this is seen as a warning against sinning against the gods.

In the Babylonian star catalogues dating from at least 1100 BC, the stars of Crater were also possibly associated with those of the crow Corvus in the Babylonian Raven (MUL.UGA.MUSHEN). It is proposed that Corvus and Crater (along with the water snake Hydra) were death symbols and marked the gate to the underworld.

Phylarchus, a Greek historical writer, wrote a different origin for Crater, in which the city of Eleusa near Troy was attacked by plague. To combat the plague, Demiphon, the city’s leader, consulted an oracle who said that a maiden should be sacrificed each year. Demiphon declared that he would choose a maiden by lottery, but did not include his own daughters.

One noble named Mastusius objected, so Demiphon sacrificed his daughter. Mastusius then killed Demiphon’s daughters and fed the ruler a mixture of their blood and wine from a cup. Upon finding out the truth, the king ordered Mastusius and the cup to be thrown into the sea, which Crater now represents. 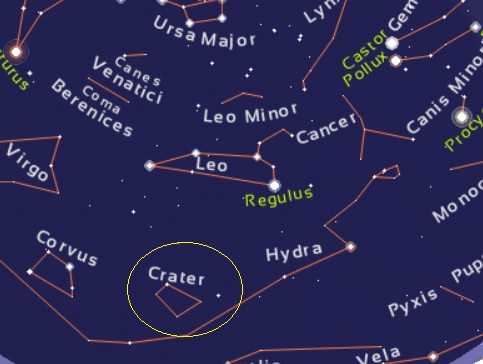 Location of the Crater Constellation

Constellation Crater is the 53rd largest constellation and occupies an area of 282 square degrees. It is located in the second quadrant of the southern hemisphere (SQ2) and can be seen at latitudes between +65° and -90°.

Its right ascension is 11h and its declination is −16°. It is best seen at 9pm during the month of April. Its position in the southern celestial hemisphere means that the whole constellation is visible to observers south of 65°N. 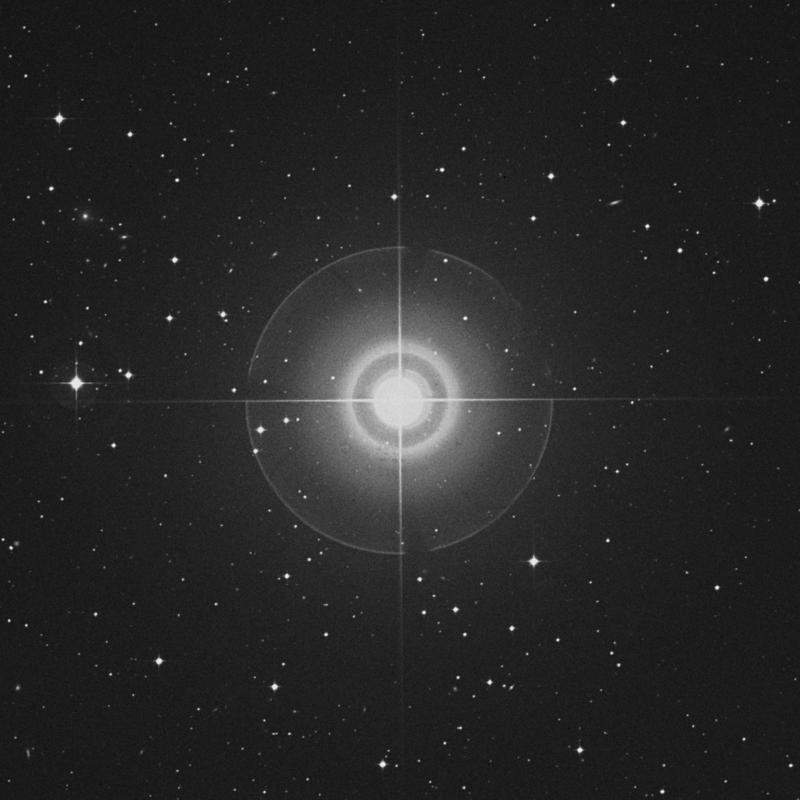 Labrum, also known as Delta Crateris, is the brightest star in the constellation of Crater and has an apparent magnitude of 3.56. It is an orange giant that belongs to the spectral class K0III. It is located around 196 light years away from us. Its name means “the lip” in Latin. 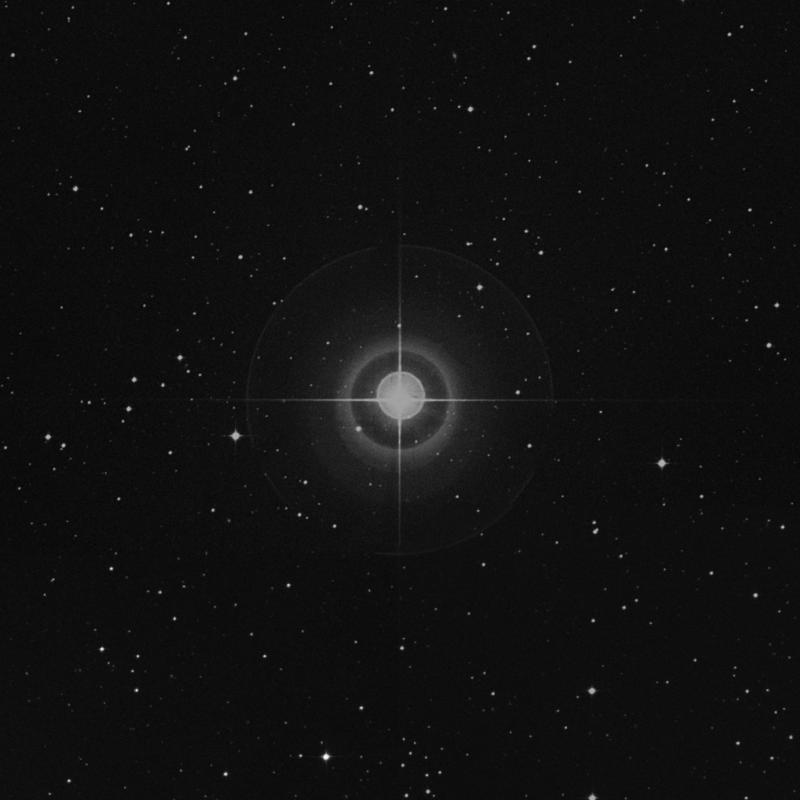 Gamma Crateris is the second brightest star in the constellation and is a close binary star. The brighter component is a white dwarf of the spectral class A9V and has an apparent magnitude of 4.06, while the companion star has a visual magnitude of 9.6. The system is located 84 light years away from us. 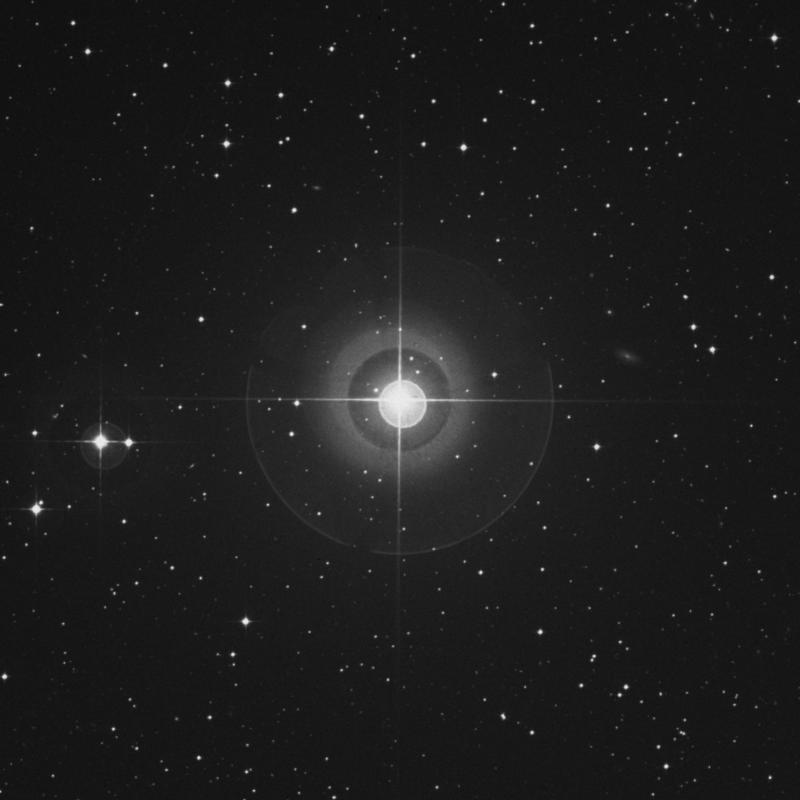 Alkes, also known as Alpha Crateris, is a class K1 orange giant with a visual magnitude of 4.07. It is 80 times more luminous than the Sun and is located 174 light years away from Earth, close to the Galactic centre. It is also rich with heavy elements. Its name is derived from the Arabic alkās, which means “the cup.” 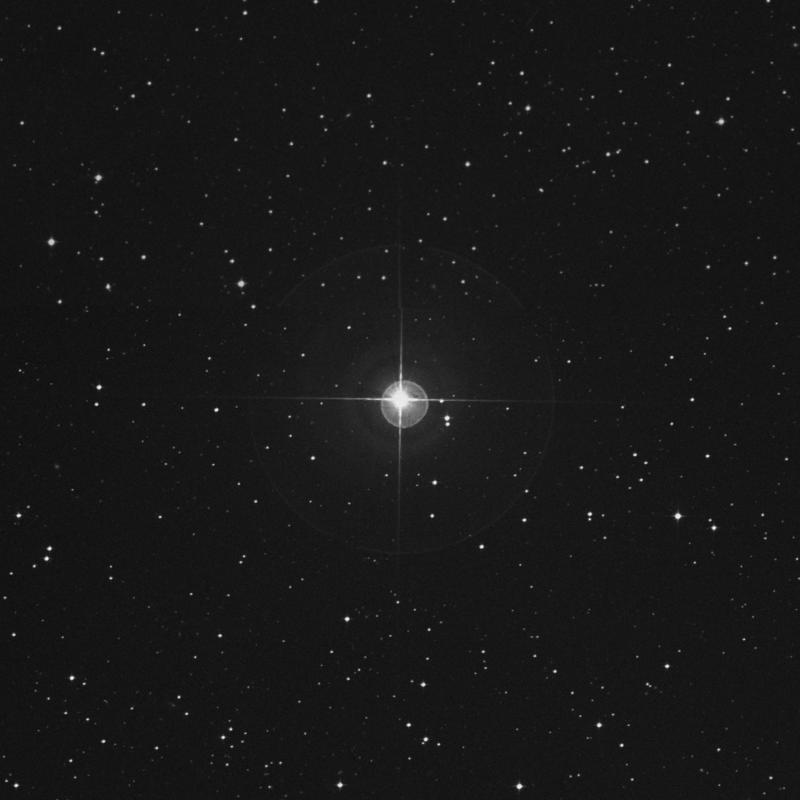 Al Sharasif, also known as Beta Crateris, is a white sub-giant with the spectral classification of A2III and an apparent magnitude of 4.48. It is located 266 light years away from the Solar System. Its name means “the ribs” in Arabic, which it shares with the star Nu Hydrae.

SZ Crateris is a binary star system composed of two main sequence stars, belonging to the spectral types K5V and M0V. It is also a variable star — a BY Draconis type variable — which is a star exhibiting variations in luminosity as a result of its rotation, star spots and other activity in its chromosphere. It has a visual magnitude that varies from 8.61 to 11.0 and a period of 11.58 days.

SZ Crateris is located 42.9 light years away from Earth and is believed to be less than 200 million years old. It belongs to the Ursa Major moving group (Collinder 285), a group of stars that share a similar motion through space

R Crateris is a SRb-type semi-regular variable star with the spectral classification of M7 and an apparent magnitude that varies between 9.8 and 11.2. It has an optical period of 160 days.

TV Crateris, also known as HD 98800, is a quadruple star system that is made up of two pairs of stars in close orbit. It is around 7 to 10 million years old.

TT Crateris is a binary system composed of a white dwarf around as massive as the Sun, and an orange dwarf of spectral type K5V. The two orbit each other every 6 hours 26 minutes. The system is a cataclysmic variable and shows variation in magnitude of 15.9 to 12.7. 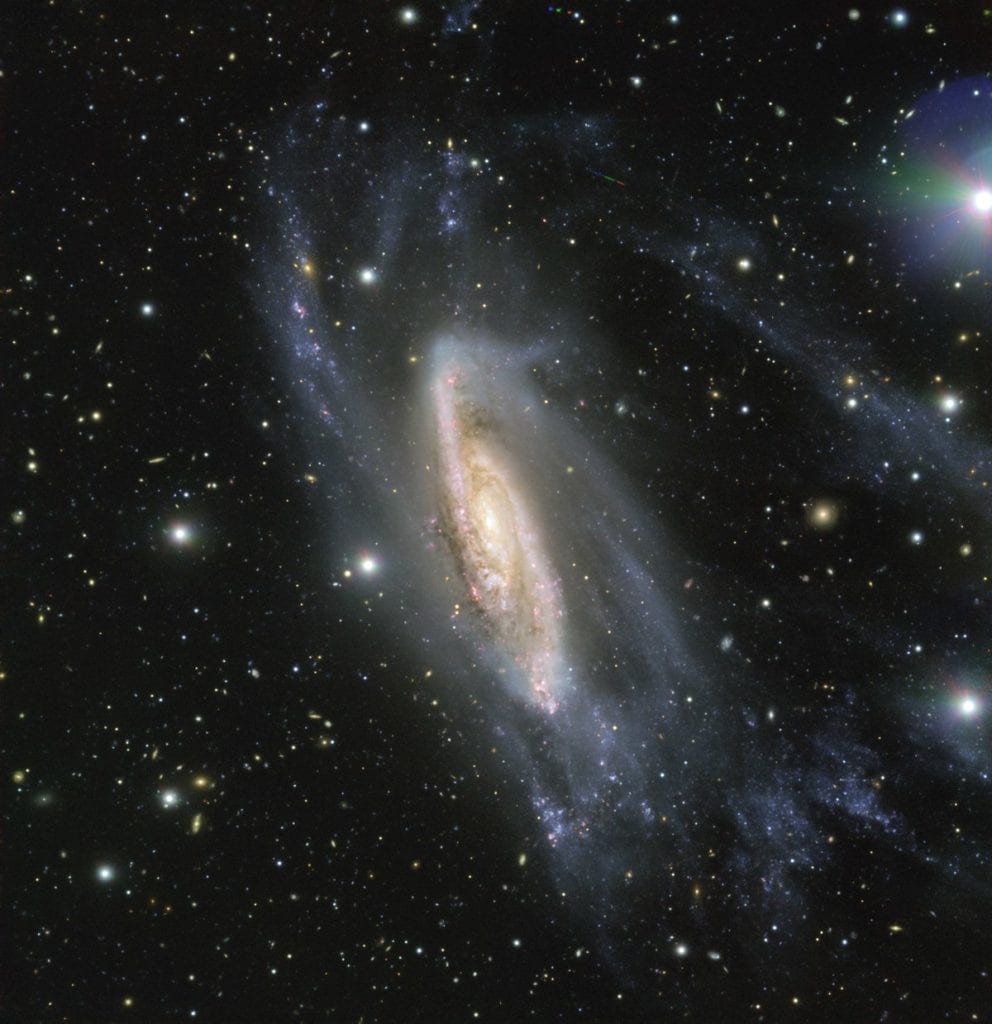 NGC 3981 is a SBbc type spiral galaxy that was discovered by German/British astronomer Sir William Herschel in 1785. It is a 12th magnitude star and is located 80 million light years away from Earth. 3’ in diameter, it has two very wide spiral arms.

NGC 3887 is a barred spiral galaxy that was discovered by William Herschel on 31 December, 1785. It has an apparent magnitude of 10.7 and is located 68 million light years away from us, about a degree and half from the star Zeta Crateris. The galaxy has a diameter of 3.5’.

NGC 3513 is a spiral galaxy with an apparent magnitude of 12. It is approximately 46 million light years away from Earth and is found in the same field of view as the spiral galaxy NGC 3511. 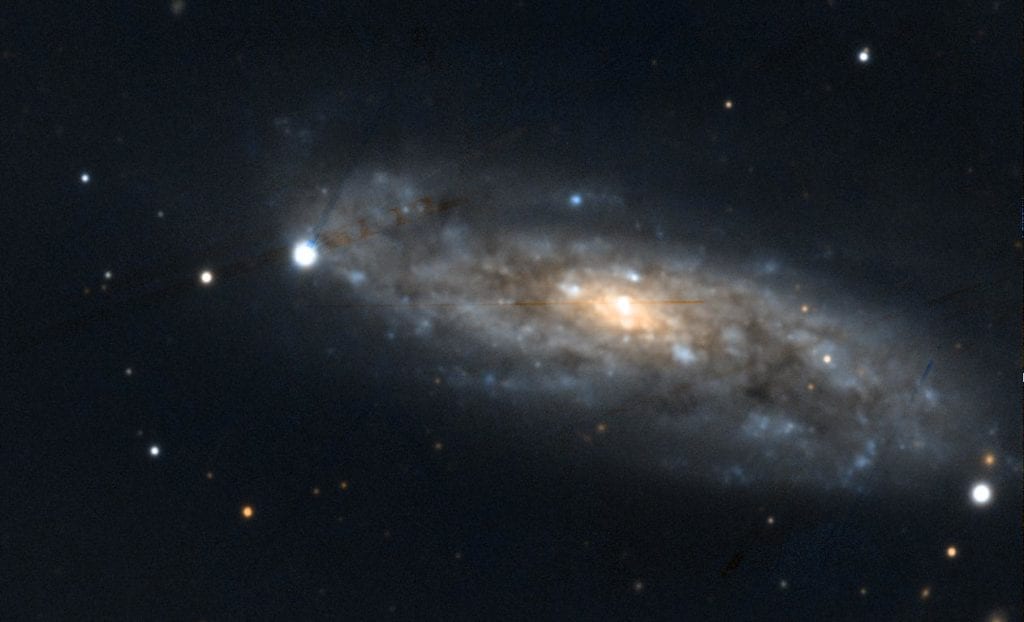 NGC 3511 is a spiral galaxy that was discovered by William Herschel on December 21, 1786. It is seen almost edge-on and has an apparent magnitude of 11.1. This galaxy also has a slight bar and is classified as a SBbc type galaxy, belonging to the Abell 1060 galaxy cluster. It is found in the same field of view as NGC 3513.

Crater 2 is one of the dwarf galaxies orbiting the Milky Way and the fourth largest dwarf orbiting our galaxy. Only the Sagittarius Dwarf, Large Magellanic Cloud and Small Magellanic Cloud are larger. Crater 2 was only discovered in 2016 because its stars are spread out from one another, despite its size and close proximity. It is only 380,000 light years in distance from the Sun.