The cancer constellation contains Al Tarf, which is the brightest star in the constellation, as well as two Messier objects — the Beehive Cluster (M44, NGC 2632) and M67 (NGC 2682). There are 10 named stars, which are Acubens, Asellus Australis, Asellus Borealis, Copernicus, Gakyid, Meleph, Nahn, Piautos, Tarf and Tegmine. The Delta Cancrids are the only meteor shower associated with the Cancer constellation. 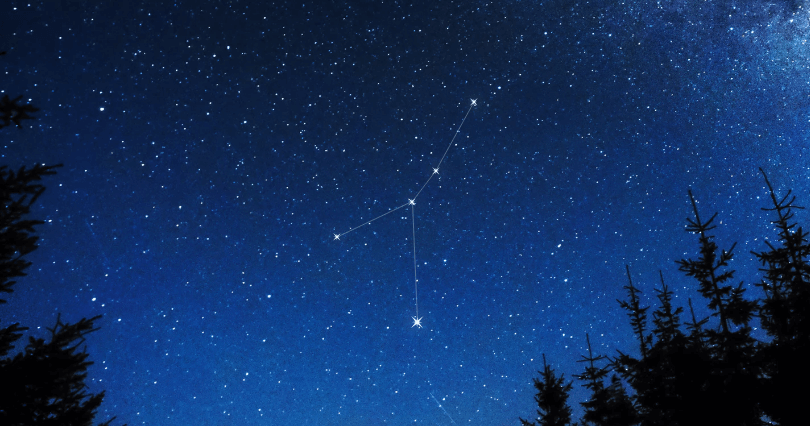 History and Mythology of The Cancer Constellation

The constellation of Cancer was first discovered by Greek astronomer Ptolemy in the 2nd century.

Another version sees the crab get crushed and Hera, who is a sworn enemy of Heracles, places it in the sky for its efforts. However, she places the crab in a region of the sky that has no bright stars, because despite its efforts, the crab was not successful in killing Heracles. This is why Cancer does not have any stars brighter than fourth magnitude. 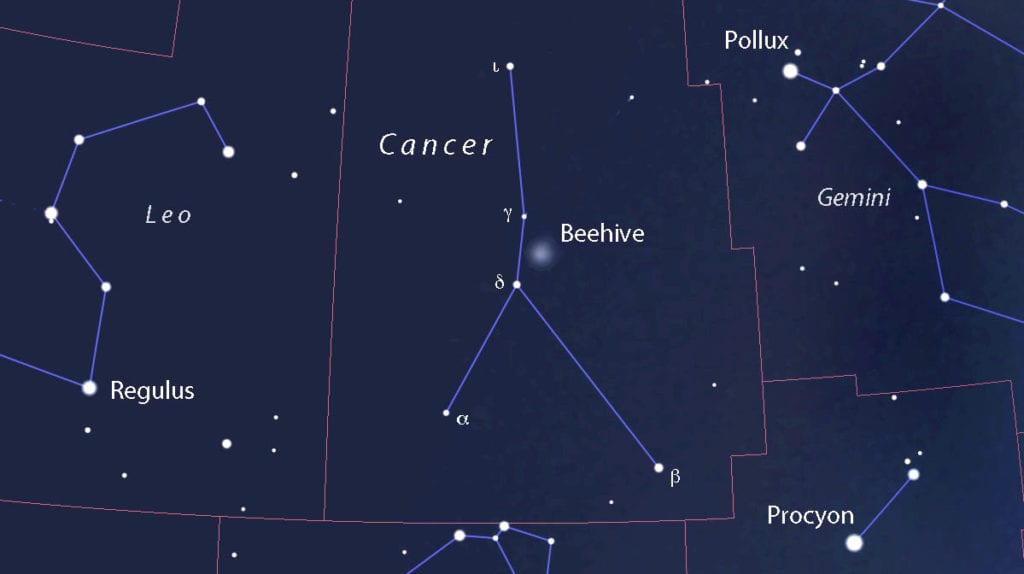 As we mentioned above, Cancer is located in the northern sky and is the faintest of the 12 zodiac constellations. It is the 31st largest constellation in the sky, occupying an area of 506 square degrees and lies in the second quadrant of the northern hemisphere (NQ2). It can be seen at latitudes between +90° and -60°. 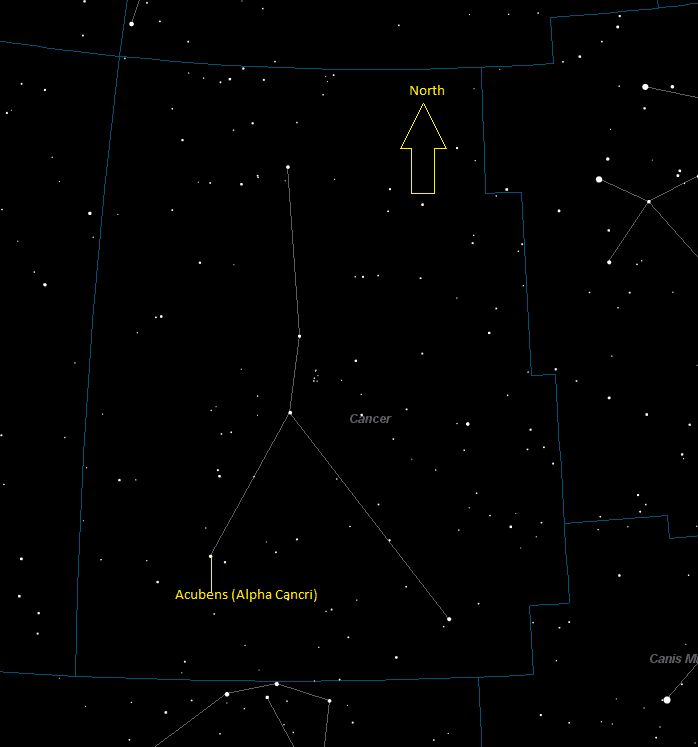 Acubens, also known as Alpha Cancri, is the fourth brightest star in Cancer and has an apparent magnitude that varies between 4.20 and 4.27. It is located around 174 light years away from Earth Sometimes, the star is also called Al Zubanah or Sertan. The name Al Zubanah comes from the Arabic az-zubānah, which means “claws,” while Sertan is derived from saraţān, which means “the crab”.

Acubens is a multiple star system, with its brightest component, Alpha Cancri A, a white A-type main sequence dwarf. It has a companion, Alpha Cancri B. Alpha Cancri belongs to the spectral class A5m and is 23 times brighter than the Sun. It lies close to the ecliptic and can be occulted by the Moon and, rarely, by planets.

Al Tarf, also known as Beta Cancri, is the brightest star in the constellation and has a magnitude of 3.5. It is located around 290 light years away from us. It is a binary star system that consists of an orange K-type giant and a fourteenth magnitude companion 29 arc seconds away. 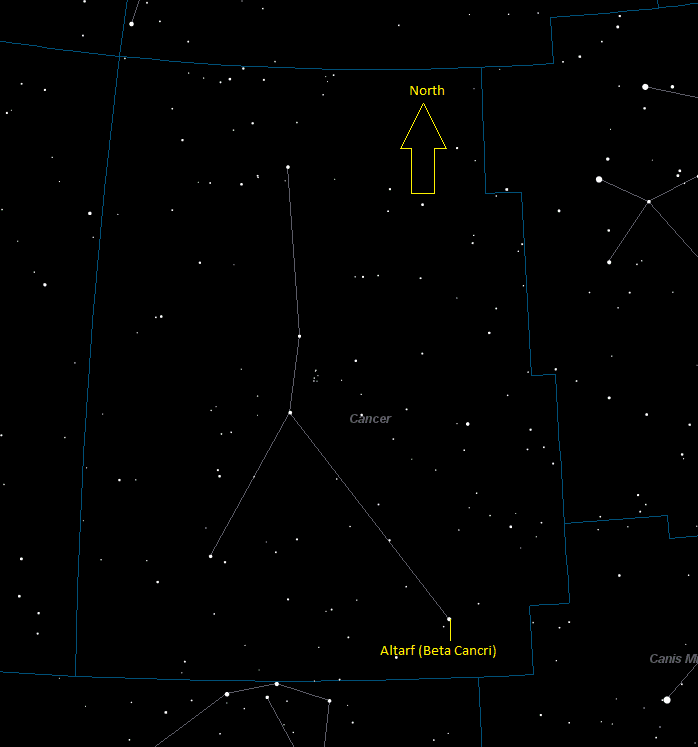 Asellus Australis, also known as Delta Cancri, is the second brightest star in the Cancer constellation and has an apparent magnitude of 3.94. It is located around 180 light years away from us and lies close to the ecliptic, meaning it can be occulted by the Moon and, rarely, by planets. 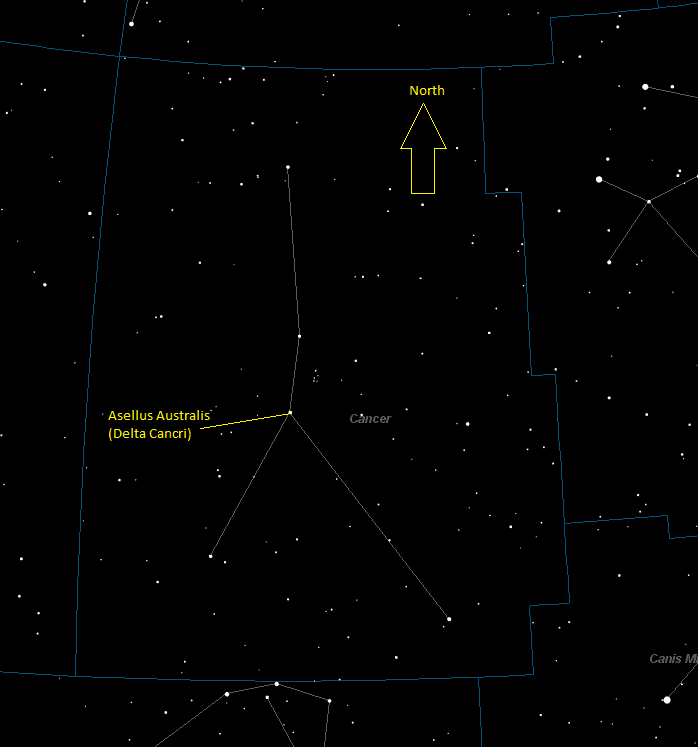 Delta Cancri also marks the location of Praesepe (Messier 44), the famous open cluster, also known as the Beehive Cluster, which we will go into more detail about below.

Asellus Australis means “southern donkey colt” in Latin. The star is also known for its less famous name, Arkushanangarushashutu, which is the longest of all the known star names. It means “the southeast star in the Crab” in ancient Babylonian. 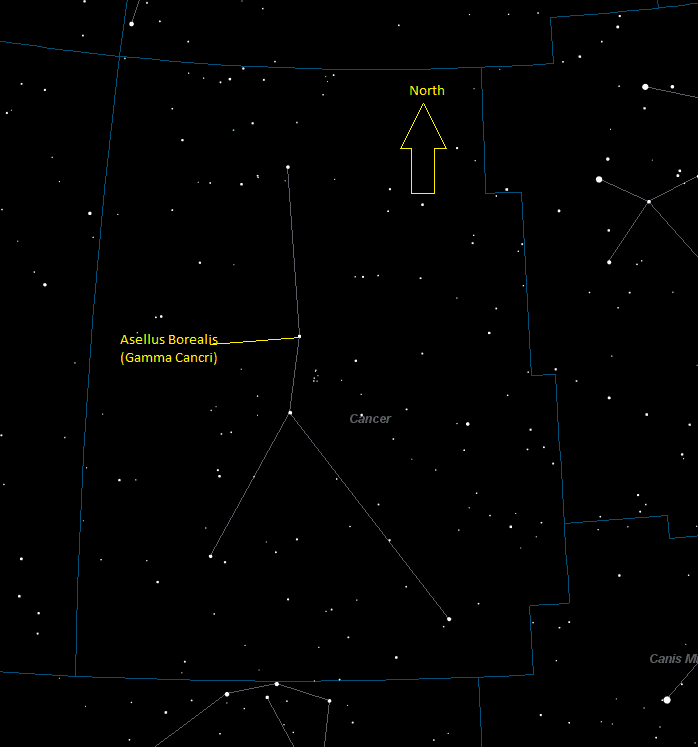 Asellus Borealis, also known as Gamma Cancri, is a white A-type subgiant that is around 158 light years away from us. It has a magnitude of 4.66 and is located near the ecliptic which means it can be occulted. The name Asellus Borealis means “northern donkey colt”.

55 Cancri is a double star that consists of a yellow main sequence dwarf belonging to the spectral class G8V and a 13th magnitude red dwarf. The red dwarf can only be seen through a telescope and the system is approximately 41 light years distant.

As of 2010, astronomers have confirmed five extrasolar planets orbit the primary star in the 55 Cancri system, 55 Cancri A. This is one of the four known planetary systems known to have at least five planets.

Tegmine, also known as Zeta Cancri, is a multiple star system approximately 83.4 light years from Earth. It has at least four stars with an apparent magnitude of 4.67. It is composed of two binary stars, Zeta-1 Cancri and Zeta-2 Cancri, that are separated by 5.06 arc seconds.

The name Tegmine means “the shell of the crab.”

Lambda Cancri is a blue-white B-type main sequence dwarf with an apparent magnitude of 5.92. It is approximately 419 light years away from us.

Xi Cancri is a spectroscopic binary star that is located around 381 light years away from us. The system consists of Xi Cancri A, which is a yellow G-type giant with a magnitude of 5.16, and Xi Cancri B, a companion star located only 0.1 arc seconds away. The stars have an orbital period of 4.66 years. 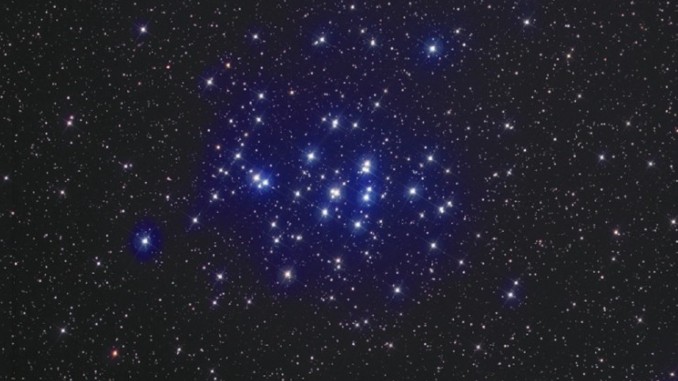 The Beehive Cluster, also known as Praesepe, Messier 44, M44, NGC 2632 or Cr 189, is an open star cluster about 577 light years from Earth. It has an apparent magnitude of 3.7 and is one of the nearest and most populated open clusters in the Solar System. Its age is believed to be around 600 million years. The name Praesepe means “the manger” in Latin.

Messier 44 contains around a thousand stars, with more than a half of them (63%) being red dwarfs, and about a third (30%) being Sun-like, classified as F, G and K-class stars. The brightest stars in the cluster are blue-white in colour and with magnitudes ranging between 6 and 6.5.

The Beehive Cluster was observed by Greek astronomer Ptolemy, who called it “the nebulous mass in the breast of Cancer”. Galileo was the first to see in through a telescope in 1609, although it is visible to the naked eye. 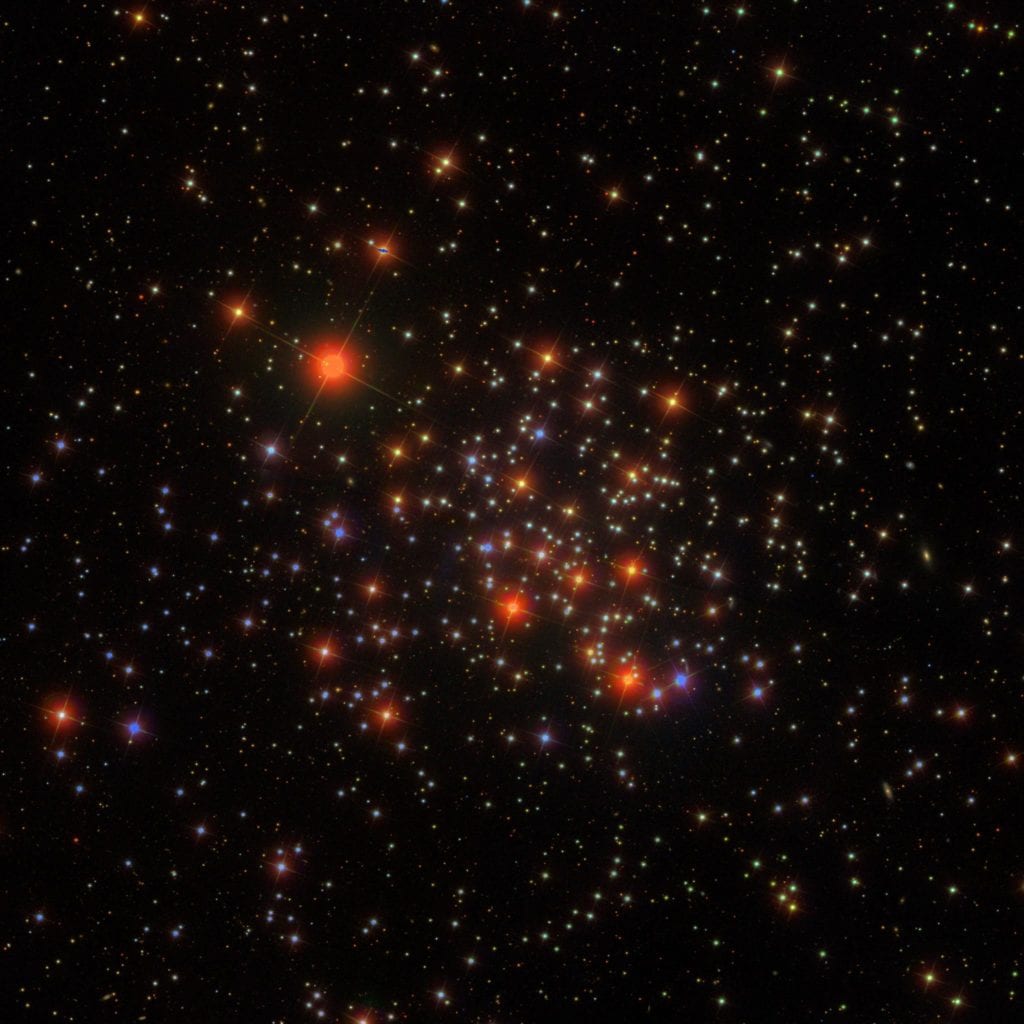 Messier 67, also known as M67 or NGC 2682, is an open cluster that is one of the oldest open clusters known. It has an estimated age of between 3.2 and 5 billion years. It contains over 100 stars similar to the Sun and a number of red giants, with almost all the stars in the cluster roughly at the same distance and of the same age, which makes Messier 67 one of the most observed and studied clusters.

M67 was discovered by the German astronomer Johann Gottfried Koehler in 1779. It has an apparent magnitude of 6.1. 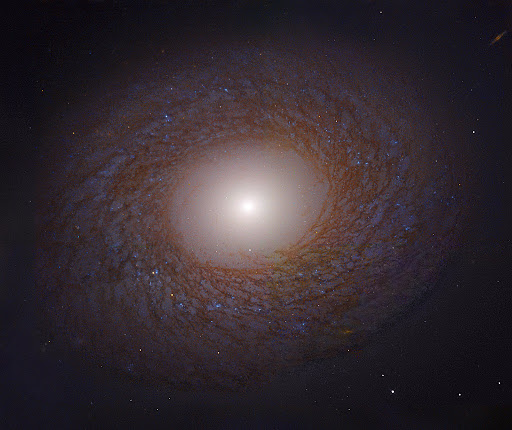 NGC 2775, also known as Caldwell 48, is a spiral galaxy with an apparent magnitude of 11.03. It is located approximately 55.5 million light years from Earth. The galaxy has multiple spiral arms with few HII regions, which means there was recent star forming activity occurring in it. It was first discovered by William Herschel in 1783.

NGC 2500 is a barred spiral galaxy with an apparent magnitude of 12.2. It has an H II nucleus and is about 33 million light years away from us. It belongs to the NGC 2841 group of galaxies, along with NGC 2537, NGC 2541 and NGC 2552 in the constellation Lynx. The galaxy was discovered in the late 18th century by Friedrich Wilhelm Herschel.

NGC 2608, also known as Arp 12, is a barred spiral galaxy that measures 62,000 light years across, and has an apparent magnitude of 13.01. It is located 93 million light years away from us. It is classified as SB(s)b, which means that its spiral arms wind moderately around the prominent central bar.